With a StarCityGames.com Invitational Qualifier tournament in my home city the next day, I sat slumped in my computer chair at 11 pm after a long week of work. I had played Wolf Run Ramp at States, doing well but falling twice to Hero of Bladehold during the eight-round tournament. That card simply can’t be Slagstormed! I wanted to play a G/W Wolf Ramp variant, but I had traded away all of my G/W dual lands, and no one had extra copies available. It was then that the insidious whispering began…

“Damnit Grandma! I asked you not to do that,” I quickly shouted.

Alas, the room was empty, and my grandmother has been dead for five years.

Taking a lesson from Hesse’s Siddhartha, I closed my eyes and allowed the rushing river to rumble past my eardrums and into my inner consciousness, where only League of Legends strategies and microwave-ready ramen recipes reside. It was then that I saw a Magic card quoting Samuel Coleridge: 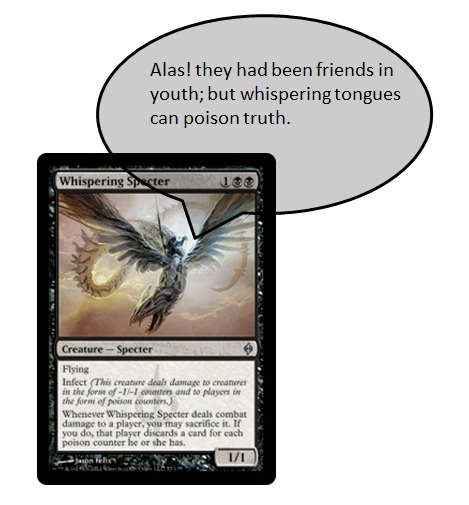 This is a Standard without a lot of spot removal besides Doom Blade. It’s a rather slow format, and many of the powerful defensive options are strong because of their effect on life totals (Wurmcoil Engine, Batterskull, Tree of Redemption). This is truly a perfect time to poison our friends with dark wings and dark words. A 1/1 for three mana on turn three? Don’t mind if I do.

Here is the list that I played in our 39-man qualifier:

Before we get into the specifics of the deck (which also seems to have taken off fairly significantly in the actual StarCityGames.com Open Series), I’ll briefly review the matchups that I faced.

With Wolf Run Green and traditional Wolf Run Ramp in the spotlight as the “decks to beat” right now, Mono-Black Infect is extremely well-positioned. Especially given the extent to which Wolf Run Green is now the go-to deck, having won SCG Open: Baltimore, the ability to open with Distress into Whispering Specter into Lashwrithe gives this deck one of the most unbeatable hands in the format. Similarly, the mere presence of Whispering Specter, with or without a Lashwrithe, is potentially devastating for U/B Control. Phyrexian Crusader, the deck’s “other” three-drop creature, is an absolute beating against red decks and simply crushes current iterations of red-based control (i.e., Burning Vengeance) if he resolves. He also attacks past most of the creatures played in U/W Blade and Township Tokens.

That having been said, a lot of the current iterations of this deck run very little card draw (often just a few triggered abilities plus Tezzeret’s Gambit) but also run a number of cards in quantities fewer than three or four. This combination of deckbuilding choices suggests that an optimal setup for the deck has yet to be found.

While this deck can be “the beatdown,” winning the game on turn four or five, it also has the ability to play control. In either role, there are some cards that consistently should not be cut:

2+ Skithiryx, the Blight Dragon (amazing threat at the top of the curve)

4 Inkmoth Nexus and at least 20 Swamp

Decks at the SCG Open in Baltimore ran the following cards (in aggregate) in their maindecks that did not appear in my initial list: Tribute to Hunger, Doom Blade, Despise, and Spellskite.

In order to cobble together a new version of this deck, we need to examine what our likely opponents are doing and how they are interacting with us. Wolf Run Green generally wins through the resolution of a large threat, which may be hexproof (Dungrove Elder), a pumped Inkmoth Nexus (via Kessig Wolf Run), a copy of Garruk, or another large creature (Primeval Titan). They interact with our threats primarily through judicious use of Beast Within, and the traditional Wolf Run Ramp deck also has access to Slagstorm. Because they have few other ways of dealing with a flying threat in the first game, outside of a Green Sun’s Zenith for Acidic Slime, knowledge of their hand and targeted discard is important.

U/B Control, in its current incarnation, runs very few creatures and relies on a heavy suite of countermagic, card draw and selection, and removal, both targeted and non (Black Sun’s Zenith) to win the game. Inkmoth Nexus is a very good threat against U/B Control, as are targeted discard spells that reveal their likely game plan and cheaper threats (i.e., Plague Stinger).

Although Despise has a number of targets against Wolf Run Green, it can’t hit any of the cards that prevent us from winning quickly. It has significantly fewer targets against U/B Control, and it’s mediocre against Solar Flare (they have Unburial Rites and few planeswalkers). For this reason, I think that Distress is the appropriate maindeck discard spell for Mono-Black Infect, although Despise may have a place in the sideboard. My experience has been that Distress is surprisingly powerful, and being able to choose any non-land card makes it significantly easier to sculpt a winning game plan. It probably should be a four-of card because there are few situations when it’s objectively bad to draw a copy.

We also need at least one additional threat, since we are an aggro-control deck, and we want to maximize the power of our Lashwrithes. The most popular choice, and the one that I selected, is Plague Stinger, because it has evasion, costs two (and thereby can sneak past countermagic if we’re on the play), and cannot be targeted by Doom Blade.

Other cheap creatures include Flensermite, which I included in the sideboard to combat red decks (lifelink + Lashwrithe is tech?), but the lack of evasion or other abilities disqualifies it from the maindeck. Ichorclaw Myr is susceptible to artifact removal and, while the +2/+2 trigger may act as a deterrent to blocking, simply having evasion probably is better. Finally, Necropede may actually be a fine sideboard choice against aggressive strategies, but it isn’t as proactive as Plague Stinger.

Now we move on to the removal package. It is important to have at least one spell that can be cast on a single mana because we often will be able to leave a single land untapped while attacking with Inkmoth Nexus or playing a threat. Both Dismember and Virulent Wound fit the bill. Dismember obviously can kill larger creatures, but our most likely targets for cheap removal are opposing copies of Inkmoth Nexus, a card which is played in almost every deck. We also (spoiler alert) will have a number of spells at two and three mana that can remove likely targets for Dismember. For this reason, we give the nod to Virulent Wound over Dismember. In addition, to the extent that Mono-Black Infect becomes more popular, we might consider Victim of Night to be a stronger removal spell than Doom Blade, especially since the more difficult mana cost (BB) doesn’t really affect us. We’re now at 29 cards, leaving us with room for seven “utility cards.”

Liliana’s “edict” effect is very powerful, and her discard ability allows us to control our opponent’s hand in conjunction with Distress and Whispering Specter. However, she isn’t very good in multiples in this deck, and so we might consider restricting her to two copies. In addition, with Mono-Black Infect moving closer to the forefront of the decks seeing play, and with green-based ramp functioning as a pillar of the Standard format, Sword of Feast and Famine may be an important card to consider including in the maindeck. Finally, Tezzeret’s Gambit may be the most efficient draw spell available to this archetype because it doesn’t require sacrifice (as does Altar’s Reap), and it provides the added (though minor) bonus of proliferating poison counters and infect counters.

Moving on, in my original sideboard, I included the following cards:

Although I didn’t play against Mono Red in the Qualifier, I don’t think that Flensermite is appropriate to include in the deck. It’s simply too fragile and rarely will be equipped with Lashwrithe without incident. On the other end of the spectrum, because the green-based ramp decks are not “pure” combo decks, resolving a Memoricide against them doesn’t guarantee a win, and it’s not a card that we want to draw after they’ve played any sort of significant threat. We therefore might consider removing these cards.

An opponent of mine at the SCG Invitational had Curse of Death’s Hold in his sideboard to “lock out” the game against the Infect mirror match, and it doesn’t seem like a bad idea. Although the card is expensive, it means that only Phyrexian Crusader (as a 1/1) and Skithiryx, the Blight Dragon (as a 3/3) can ever see play on the other side of the board. A second copy leaves them with very few outs unless they already have equipped a creature with Lashwrithe. We might consider, though, whether Despise is a superior card in the sideboard. As of now, I’m not entirely certain. We also might consider some copies of Ratchet Bomb because it’s such an efficient answer to Township Tokens and also can deal with Beasts (Garruk, Primal Hunter) and planeswalkers themselves.

I therefore suggest the following list as a current incarnation of Standard Mono-Black Infect:

All told, this is a very fun deck to play, and it’s surprisingly interactive as well. Until control decks and ramp decks learn to answer the flying threats presented by this deck, Mono-Black Infect will continue to rack up numbers!

Now—a brief note on the BUG deck against which I played in the Top 4. I haven’t yet seen the decklist, though it should eventually be posted on StarCityGames.com. It contained the following cards (at least):

The deck’s true engine seemed to be Garruk Relentless. Both of our games saw him counter my turn-three play (Whispering Specter/Phyrexian Crusader) and land a Garruk Relentless to “fight” my Plague Stinger. Because I didn’t have an Inkmoth Nexus/Lashwrithe to kill his Garruk, he was able to tutor up a chain of threats (Acidic Slime to kill my Inkmoth Nexus, Phyrexian Metamorph to copy Slime, etc…).

The lesson learned here is that Garruk Relentless is absolutely amazing against Mono-Black Infect and may actually play as a very slow Survival of the Fittest variant in the current format if it’s placed into the appropriate shell.