“Should I play R/G Landfall next weekend for the Open?”

“Nah, too much Jeskai Black that varies a lot, might be too tough to beat them all.”

Ari Lax sure knows how to keep it short and sweet, giving me all the information I could ever need in very concise statements.

The week before #SCGPHILLY, I did a whole lot of research for what Standard looked like. The last time I got to play Standard was the Season Three
Invitational in New Jersey, so I definitely had to brush up on my skills with what little time I had. Magic is always in my heart, but opportunities are
always knocking, and sometimes you’re going to want to take them.

From what I could gather, Jeskai Black seemed to be on the downswing, while Esper, both Tokens and Control, have been doing well. Abzan is still strong, as
is Atarka Red and G/W/X Megamorph. This led me to R/G Landfall. Jeskai Black was the big problem for it, but you can beat half of it, and if it’s not
popping up as much, that helps.

The current iterations of Landfall have had trouble punching through damage in the midgame. Den Protector is great, but that’s all you’re really working
with, and that runs right into spot removal. In fact, I’d wager that the Temur Battle Rage + Become Immense combo is the weakest part of the deck,
only because of how much more difficult it is to actually land it. You don’t have things like Hordeling Outburst or Dragon Fodder to go as wide as
possible, or Makindi Sliderunners to make things easy. Yes, Temur Battle Rage does give trample with ferocious, and that’s arguably what makes the combo
work so well, but I’m not about to get left with just that without ways to hit ferocious.

So, I decided to address those issues.

The goal here is to lessen the strain on overextending on creatures and resources by simply having those resources do as many things as possible. While
Snapping Gnarlid is probably the better creature because of how important that extra toughness is in combat, Makindi Sliderunner shares the spot with it
because of how much the overall toughness of creatures in Standard has actually gone down quite a bit. Additionally, when Hangarback Walker is being
heavily relied on, even if people adapt to it, the decks playing it aren’t going to find the time to find a better option than Hangarback Walker. Everyone
will value it as a sacred cow, even if it sucks for a week or two.

So in addition to Makindi Sliderunner, I added two Retreat to Valakut. One in the maindeck, and one in the sideboard. 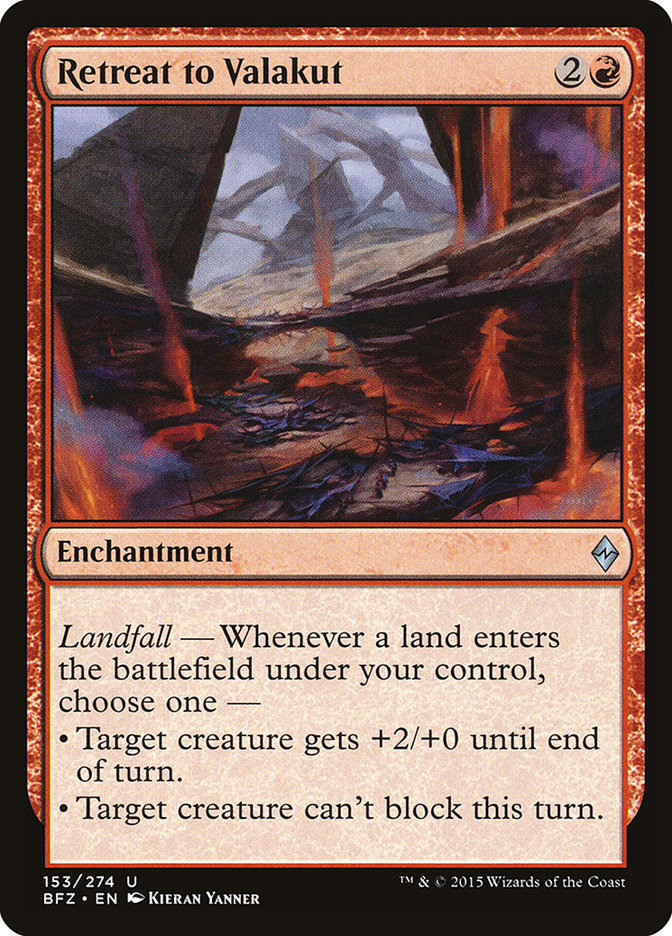 The card isn’t as universally good as it seems. It’s an enchantment that requires a delicate balance between creatures and lands, as well as a delicate
balance between opposing removal and creatures, so figuring out which modes to use in complicated situations will be very tough. That said, this entire
deck is all about the right balance of resource management, and I’d rather brute force my way through things at opportunities of my choosing with this deck
than have some sort of awkward dance that won’t end up in my favor because my cards aren’t as good in a vacuum against Abzan and Megamorph. Retreat to
Valakut addresses and caters to exactly this.

Having more than one offers diminishing returns, which sounds weird since you get double the effect. However, the more copies you play, the more you risk
not having actual creatures or advancing effects. As previously said, you aren’t getting anywhere if they’re killing the creature that has +2/+0 or if you
risk dying on the backswing. There are a lot of matchups where you want more of these effects, like Megamorph and Jeskai Black, but starting both takes
away from your opening consistency, and there’s nothing I’d want to cut for my game 1s.

The Outpost Siege plan is still very strong because of the general nature of how players sideboard. Too many people still sideboard for games 2 and 3 as if
they’re still playing game 1s. More so, people still play as if they’re still playing game 1s. The Outpost Siege (and to a lesser extent, Sarkhan, the
Dragonspeaker) tries to completely exploit that, leaning on the fact that you get benefits of everything you hit: lands, spells, and creatures.
Sideboarding out some or most of the combo, then constantly threatening it as often as possible throughout the course of a game is something I can
certainly see myself doing. I considered building my entire sideboard based on how others sideboard, but I was weary on how many actual strong cards I
needed. This isn’t a slight against the other cards, but a Roast is a Roast.

The two cards I’m most skeptical of are Yasova Dragonclaw and Hordeling Outburst. Yasova is just an efficient beater at worst, and can completely warp a
game against a portion of Hangarback Walker, which I like. Comboing with Titan’s Strength is nice too. Getting Wild Slashed sucks though, and I’m
ill-inclined to play more than one, even if it’s going to die frequently. This deck wants to flow as much as possible, and if I’m not utilizing all of my
resources at all times, then I can fall behind very easily. 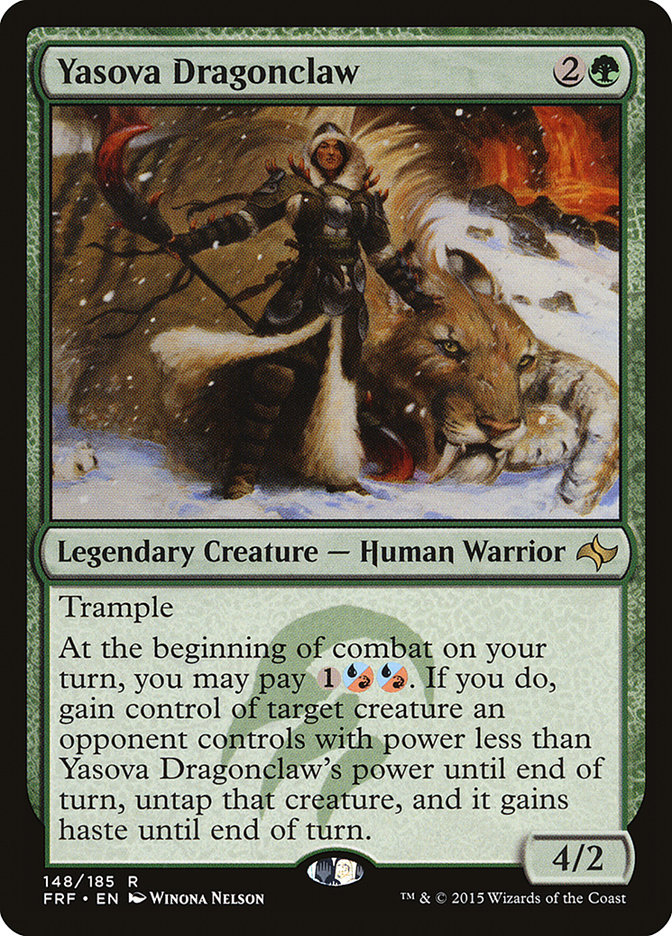 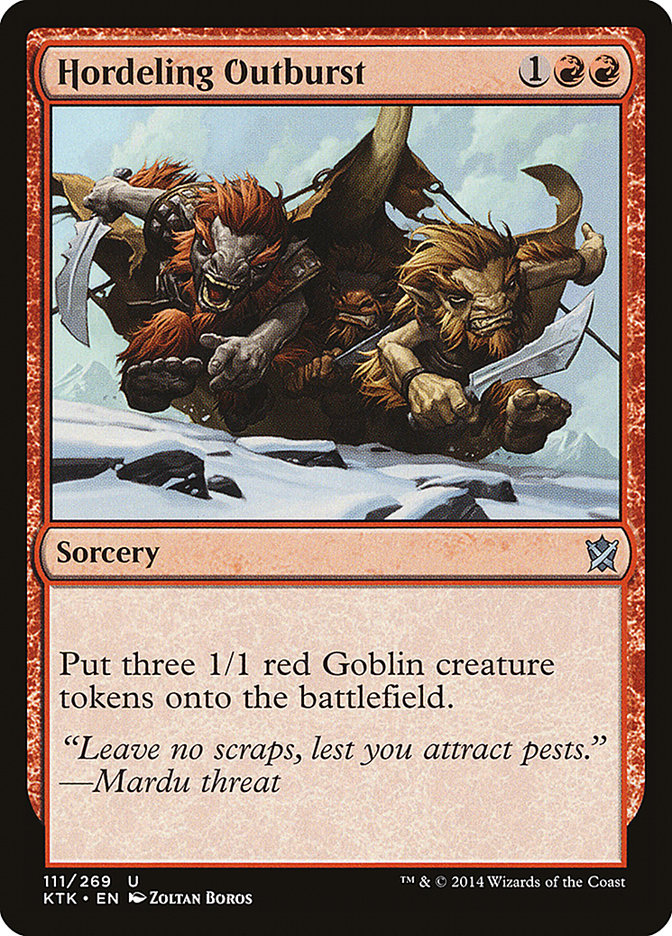 Hordeling Outburst provides a different problem. The mana cost is sketchy at best, as I may not have double red all the time. The bigger issue is Radiant
Flames. Does it make sense sideeboarding in a card that runs right into it? Not really. I want a card that bounces back against those sweepers though, or
leads them into one so a dash or haste creature cleans up. The other alternative is Chandra, Fire of Kaladesh, which is better against anything that stalls
the battlefield up easily, but worse against spot removal of any kind. If the Esper matchup is as good as I think it is, then I can see making the switch.

All of these changes are really small, and I don’t think it’ll make a huge difference, nor will it make or break your entire tournament more than something
else will. As I would always recommend, try things for yourself and adjust accordingly.

I would wind up X-3 going into the last round. I conceded to my opponent after defeating him in two games so that he could lock up day two. I would have
loved to have seen the both of us play on Sunday, but for me, it’s not that serious anymore. There are a ton of things about Magic that I enjoy that many
competitive players and grinders wouldn’t understand, and I wouldn’t fault them for that. As much as enjoy the competition and being in the thick of
things, there’s so much more to tournaments than that to me, so I want to experience all that I can. Contrary to popular belief, you can be someone who
cares about winning as much as the next person while also being someone who doesn’t let that define you. Seeing someone else succeed is more satisfying
now. It has been for a while, I was just trained to think that that wasn’t okay. I’m very grateful to have some of the best players in the world as
friends. Because of them, my competitive spirit will never die, but I can also be encouraged to do what I want and have complete support.

That brings me to this touching story.

As I begin doing what I always do when preparing for a Sunday tournament, which is throwing Modern cards on the table, sleeving them up at random and
calling, it a deck, an older kid asks to sit next to the group I was with, to which I welcomed. He asks me a question about dealing with nerves when
playing in big tournaments, as he suffers from anxiety, which really makes things difficult for him.

Luckily for him, I also go through some pretty rough anxiety, so to his surprise, I was able to relate quite a bit to what he goes through. We began
chatting more about how we try and find different ways to cope with it, and share some ideas on how we can apply each other’s methods to our own arsenal.
It was a very touching and enlightening conversation, and it goes to show that we are all human beings that aren’t perfect. When your version of perfection
is left out of your own expectations for others, then it gets much easier to see just how great we all can be. Magic is just what we have in common.