I couldn’t decide whether or not my article needed a personal introduction, but here I am writing one anyway. Way back when I was just a Team Limited specialist, I wrote an article for this website. From the looks of the forums for that article, most of you not named Gadiel probably didn’t know that. But here I am, writing for Starcitygames.com again. Let me just say that, so far, it’s good to be back.

My “first” article here – there won’t be a two-year lapse this time – is to be about standard because in the words of my editor — people like to hear about Standard. He also said anything but Magnivore, but I’ll get to that.

I’ve been playing quite a lot of Standard recently. Nationals season is approaching, and U.S. Nationals is immediately after French Nationals. French Nationals falls on the same weekend as Grand Prix: Malmo (and Grand Prix: St. Louis) so a number of high-level professionals will be absent from French Nationals. This makes U.S. Nationals the first Nationals to watch, although anyone playing will certainly be looking at French Nationals for last minute tech. Like I said, I’ve been playing a lot of Standard in preparation for the event. Learning the format and how to beat the important decks is a surefire way to succeed… well, it’s a start in any case. I play primarily in the Magic Online Standard queues, which – albeit slightly fast as far as the development of the metagame is concerned – is a fairly good way to test. You’ll see what decks are out there, and you’ll see if your deck has any merit or if you’re just wasting your time. Consistent success probably means you’re doing something right; breaking even or losing is, of course, not what you’re looking for. I’ve also spent a few hours at the Flores’ residence, where I was introduced to this deck:

I didn’t get to shake its hand or anything like that, but when I arrived about two or three weekends ago, I heard “this might be the best deck imaginable against Magnivore.” Mike Flores doesn’t exaggerate, so I was interested.

I watched Mike play and finished out the set. The deck was up 7-3 against Vore, losing primarily to good Wildfires and falling behind/getting Eye of Nowhered out of the game. This article isn’t about Magnivore, so it’s fitting that I first talk about it.

Magnivore is the natural answer to the rise in popularity in Steam Vents. Tron decks are naturally the most powerful control decks in the format because of the lands they play. Before Dissension came and gave us Spell Snare, they were more or less kept in check by aggressive strategies while doing quite well against other control decks. Post-Dissension – and anyone who has gotten a Hand of Honor Spell Snared lately will tell you this – it isn’t quite that way anymore. Spell Snare gave a boost to every Blue deck, but shoring up aggressive strategies for the Tron deck was quite a bolstering effect to an already superlative deck.

Magnivore, then, is the deck that beats the overly-good Tron decks. You have better mana because you don’t have twelve colorless lands, and with ample Stone Rain, Demolish and Eye of Nowhere disruption, their Tron isn’t exactly going to be flourishing. So, back to my point — Magnivore might very well inadvertently be the deck to beat, thus my interest in “Eisel.dec” (above.)

After a weekend of testing, the first thing I did was I obviously test more. Ironically, my first match of the day (before I switched to it) was against the Glare deck. I was thoroughly defeated in three games, and I probably shouldn’t have wasted any time with other decks and switched immediately, but this required finding a Breeding Pool, and I’d rather borrow it if possible, and blah blah blah. I got it, I joined a queue, and I lost.

This is hardly new to me. I lose all the time. In fact, when it comes down to it, if I lose and learn something while preparing for an event I’m probably just as happy as if I had won. During the event itself is where I’d prefer to do the winning, is what I’m saying. I don’t recall what I lost to. Most of the matches I play a blur (I play a lot), but of course, I joined the next queue and I lost again. A mana flood here, a few mulligans there… I distinctly remember getting demolished by “Wafo-Tapo control” in a game where I went Sakura-Tribe elder, Loxodon Hierarch, and had a few more spells. I lost a match to a “Critical Mass Update-Update” deck. A U/G “good stuff” deck, updated to include Simic Cards (Plaxcaster Frogling, etc). Again I had good starts, with turn 3 Grand Arbiter and eventually Demanding for (and resolving) Glare of Subdual, getting it Naturalized in a stalemate and losing to an eventual Meloku the Clouded Mirror.

If I had played against nine Magnivore decks, I might very well have beaten them all – who knows – but I didn’t. I played against other decks (always a possibility), and I didn’t beat any of them. Sure, I went to game 3 a lot, and I could have probably drawn one more spell instead of a land to have a real shot a few of those times… but I didn’t, and lost. I definitely drew a redundant Grand Arbiter a few of those times while losing to a Jitte, though. That definitely happened.

It’s funny, I look at the decklist and I know why every card is there, but I don’t know how to convert that to a victory. I’m not going to do a card breakdown, but I would like to talk about a few cards before I go on to making suggestions on how to improve the deck for those diehard Glare fans out there.

Dovescape — I sing Dovescape’s praise at least once a day (and I have a lovely singing voice). It is so exciting and excellent, and I really liked this deck because it had Dovescape, and Dovescape is awesome.

This card effectively shuts down any control strategy, should it resolve. Their outs at that point are playing Keiga, the Tide Star, and sacrificing it to Miren, The Moaning Well to steal your Patron of the Kitsune, then playing another Keiga, the Tide Star — but only if you have no Glare of Subdual and no spells. While this exact situation occurred multiple times, it isn’t that likely. Dovescape resolving is effectively good game, even if it takes a while to acquire the position where you actually win. Your deck being a Dovescape Deck means it’s obviously geared to abuse the card, and in the long run you’ll win with it in play against most strategies. 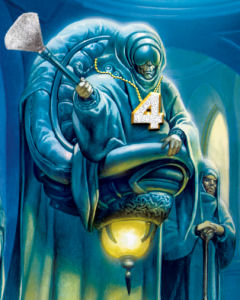 The next card on the list is a very exciting card, too… only not. Grand Arbiter Augustin IV (or simply, 4). 4 is a card that enables turn 4 Dovescapes (If you play a 4 on turn 3 and can untap with a combination of Blue and White mana equaling three, and another mana, you can cast Dovescape). This is wonderful; it allows you to play Dovescape extremely early against control decks, where you want it, if you draw one. However, beyond that, it is a Sphere of Resistance that doesn’t affect you. Sometimes it helps with Supply / Demand, but a lot of the time this guy is just getting you slightly cheaper Loxodon Hierarchs, and you’d better hope they’re good enough to swing the game.

Most decks that aren’t control decks — I am conceding that it is very good when in play against control decks — won’t get beat by a 4. It’s a 2/3, meaning its impact on combat is negligible, although at least it won’t die to Pyroclasm. Decks that succeed in the metagame that aren’t control decks have typically very tight mana curves, with lots of one and two drops, and possibly cheap removal spells to back them up, meaning if he were to interfere in combat he wouldn’t last for long. To compound this, any creature with Umezawa’s Jitte destroys you if you don’t have one of your three answers – or four tutors for Congregation/Glare – although as anyone can see, those are very slow and mana intensive solutions to a very fast and prominent problem.

Shining Shoal — of course, an excellent foil for the card Wildfire and potentially the same for Pyroclasm; certainly not bad against creature decks — although sometimes you get stuck letting an Elder die so damage will resolve, or you simply can’t get enough out of it to merit a two-for-one in the wrong direction. It does all of that… and still, I’m not sure it’s good enough. If it weren’t an integral part of the Dovescape plan (tap ten, make ten guys) I’m not entirely sure its presence would be warranted. 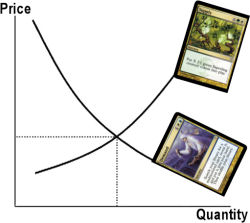 I know Nick is going to read this, and I know that when Nick designed this deck, or tuned it, he wanted maximum flexibility, which is a fine strategy for a tournament like Regionals. You get a lot of flexibility in the sense that your deck can answer just about any strategy, given a little luck (or simply drawing the proper tutors and mana). This is fine, but the deck gains a lot of frailty at the same time. The same way I always wish I had more Glare of Subduals in the maindeck… well, you get the idea.

Am I suggesting de-evolution as the solution to fixing this deck? I might very well be. Katsuhiro Mori won the World Championships with a very similar deck, though his deck was more robust and featured more of the good cards and less of the “flexible” ones.

Of course, this deck beats totally different decks, but I believe there are important lessons to be learned. While I admit Arashi has no place in the current Standard metagame, and Kodama of the North Tree dies to Wildfire a fair amount of the time (those Shining Shoals could easily stop that, though), I think that robustness of this nature is rewarded. Redundancy over Flexibility, especially with cards like Glare of Subdual that are so dominant in certain matchups, but so easily answered (a lone Naturalize, Pithing Needle – or a myriad of other cards – quickly come to mind.)

The Blue/White/Green Glare deck has two paths it can follow; one against control (acceleration, Dovescape) and one against beatdown (Glare, Glare enhancers, tutors). The inconsistency arises when you draw the wrong parts. It happens often, therefore it’s a problem.

I think as exciting as Dovescape is, it should definitely be in the deck — but probably in the sideboard. In fact, I’m not entirely sure that any Blue belongs in the deck at all, but once you have Supply for tokens, going that extra length and playing blue mana for Demand isn’t unreasonable.

I’m going to leave you all with the notion that cutting Grand Arbiter and moving Yosei to the maindeck, finding room for Umezawa’s Jitte and possibly benching Shining Shoal and Dovescape (to the sideboard) in favor of an extra Glare an extra Congregation and an extra Guildmage, or whatever else you’d like, might be the way to go.

I’ll be reading the forums (and posting too, probably.) Come join me there.