Dale-is-my-middle-name, back for another round. My recently minted column title “Compulsive Research” sums me up pretty wellâ€”it
defines a large part of my life. What I don’t know, I have to find out, and I’m never happier than when I have a problem to solve and a
stack of books with hints to the answer.

I collect; I study; I organize. I am a Hobbyist with a capital H. Not even winning at Magic gives me the same kind of rush as mastering new knowledge.
That rush is what drives me to do things like reviewing every English-language Core Set, Promo, and early-expansion card ever printed, searching for
real-world flavor textâ€”more than 8000 card images.

Don’t worry. I only looked at the cards. I didn’t memorize them. That would be insane.

There are plenty of great authors or sources who only have one appearance in the flavor text of Magic. Pyrotechnics wasn’t the same after Wizards
replaced its Navajo war chant with a boring line from a generic, anonymous storm shaman. The 9th Edition version of Cruel Edict with its Wilfred Owen flavor text is the only Magic card ever to make me cry. (If you’ve never
read “Anthem for Doomed Youth” in its entirety
before, please do so.) Benjamin Franklin’s legendary quip about the perils of the American Revolution is the only good reason to remember the 8th
Edition version of Solidarity. 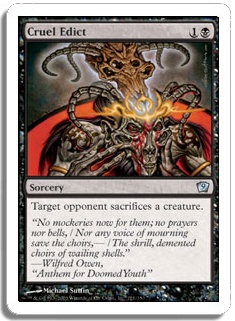 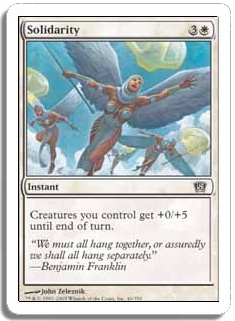 There are some authors, though, who seem tailor-made for Magic. Sometimes, a voice dominates a set; other voices carry over from one core set to the
next, always making their small contribution to Magic players’ liberal arts literacy.

I’ve gone through and identified the top five author-sources of real-world flavor text in Magic’s English-language history. (I’m not
enough of a polyglot to know whether any French-language cards quote Victor Hugo beyond the Renaissance version of Vampire Bats, for example.) Before I get to the top five, though,
there’s a writer who, like a film with too big a budget at Cannes or Sundance, is best seen out of competition…

Jenny Scott is a real person. Her poem “The Love Song of Night and Day,” exists in its
entirety, and it is beautiful enough to touch Geordie Tait shriveled black heart. Yet it’s a
poem written for Wizards of the Coast and for their Jamuraa, a fictional plane. Neither Jenny Scott nor “The Love Song of Night and Day” is
a name known to the poets of this earthâ€”not necessarily a just fate but the truth. A real poet of a fictional universe: where could that leave
her but a category all her own?

With seventeen mentions of her work, Jenny Scott would’ve landed in third place on the list of real-world flavor text authors. A list of the seventeen
cards quoting “The Love Song of Night and Day”
appears at the bottom of the link. My favorite is Sands of Time. 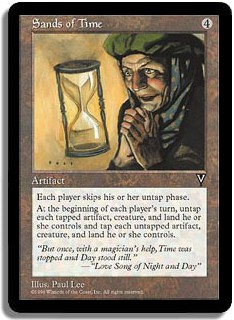 The list starts with a bit of a surprise selection:

This source is problematic and not for the obvious reason. 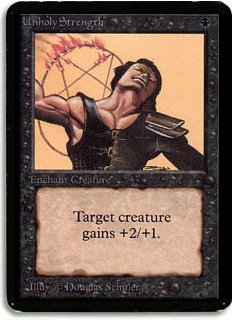 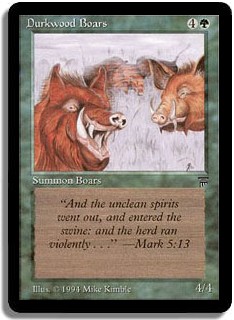 Depending on the Christian tradition, the number of cards with flavor text from “The Bible” is either four or five, because one quote comes
from a book that’s not universally accepted. To illustrate, a little game of spot-the-difference. Ignoring the border color, what is the main change
between the two versions of this card? 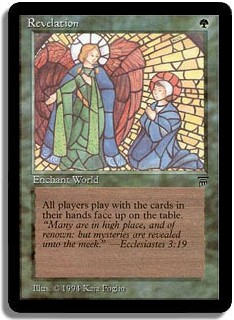 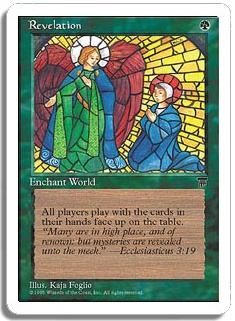 In the original Legends printing, the quote was attributed to the Book of Ecclesiastes. Yet
Ecclesiastes 3:19, in the King James Version, begins: “For that which befalleth the sons of men befalleth beasts…” Quotable but
definitely not the quote on the card!

Instead, the quote comes from Ecclesiasticus, also known as Sirach. Sirach is Deuterocanonical, part of the Roman Catholic and Eastern Orthodox canons but rarely recognized
as canonical by Protestants. All that boils down to “four or five, depending on the Christian tradition used.”

If one accepts the four-card figure, that puts The Bible in a tie for fifth with

Alfred, Lord Tennyson. If one accepts the five-card figure, then The Bible is in a tie for fourth with Edgar Allan Poe. As a compromise, pleasing nobody but
myself, I’ve given it sole possession of fifth place in my list.

Durkwood Boars, Legends (and other printings)

Knight Errant
, Portal (and other printings)

Segovian Leviathan, Legends (and other printings)

Moving from the sacred to the profane, there’s Edgar Allan Poe. This 19th-century American author is the granddaddy of horror writers, and
he’s the unusual writer who’s known for both his poetry and short stories. His writing was part of Magic flavor text from the start: Frozen
Shade quotes from his poem “Silence,” while Phantom Monster uses a passage from another poem, “The Haunted Palace.” His first
short story quote, from “The Pit and the Pendulum,” appears on the 8th
Edition version of Death Pits of Rath. The five distinct cards with Poe quotes borrow from five different works, a tribute to his varied and tumultuous
imagination. He’s also one of the few authors to have real-world flavor text on a land card.

This one surprised meâ€”for an English Romantic poet with only six cards quoting him, he seems to be everywhere. That’s because his
cards were printed early and reprinted often: Scathe Zombies saw print in every core set from Alpha through 10th Edition, and Hypnotic Specter, though
it had a shorter original run, became an iconic and much-feared card. In fact, five of the six cards quoting Coleridge first appeared in Alpha.

Coleridge’s most quoted work is “The Rime of the Ancient Mariner,” which appears on Scathe
Zombies, Wall of Ice, and Will-o’-the-Wisp; his other major poem, “Kubla Khan,”
has a single mention on Sacred Nectar.

When I started my search, I expected The Bard to be in first place, so when he didn’t end up in front, it was a bit of a surprise to me. He does
have credit on two dozen Magic cards, though, putting him in second place.

Hamlet
, Julius Caesar, King Lear, Macbeth, A Midsummer Night’s Dream, Othello, Romeo and Juliet, The Tempest
â€”his most quoted work in Magic is one of his more obscure “problem plays,” Troilus and Cressida. 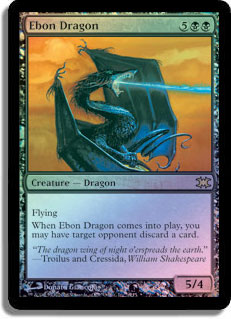 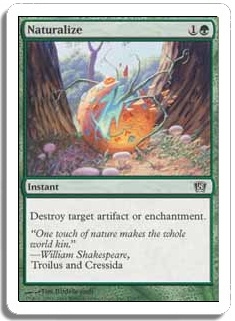 Ebon Dragon, From the Vault: Dragons

If Shakespeare comes in second, then who’s in first? 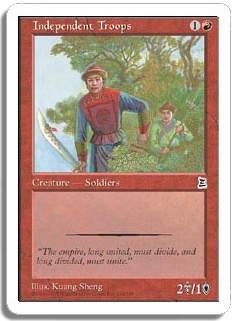 Who? He lived in China during the 14th century by the Western calendar. He was the author of Romance of the Three Kingdoms as a unified work and believed to be
the editor of Water Margin, again as a unified work, thus having a strong
association with two of the Four (or Five) Great Classical Novels of Chinese literature. The easy comparison
is to call him “China’s Shakespeare,” and even that sells short his influence.

His works have a heavy influence on popular culture in China and elsewhere in Asia. Without Water Margin, there would be no Suikoden video games, and without the Romance of the Three Kingdoms, there would
be no Portal Three Kingdoms and arguably no Magic: The Gathering in China.

Magic is allowed in China as a “mind sport,” as described in this interview from Worlds 2010,
and was

first authorized in 1998. (I’ll have to borrow the reporter’s comparison of Magic to the card game bridge.) Portal Three Kingdoms was released in July 1999 and only in the Asia-Pacific
markets. Adapting the mechanics and flavor of Portal to the Romance of the Three Kingdoms, a beloved and intellectual work, was the perfect
entry to the Chinese market. (Starter packs of the game include a booklet that offers a summary of the Three Kingdoms story.)

Luo Guanzhong’s words appear only once outside Portal Three Kingdoms, on the 8th edition version of Peach Garden Oath (which does not credit Luo
Guanzhong or the Romance of the Three Kingdoms directly). Nonetheless, with 40 cards directly quoting from Romance of the Three Kingdoms and many more paraphrasing his stories, Luo Guanzhong is easily the most quoted real-world author in Magic. He
also has the honor of appearing on the most expensive Magic card with real-world flavor text: Imperial Seal.

Control of the Court

I hope you’ve enjoyed this look at the most common sources of real-world flavor text in Magic. I’d like to finish with a casual deck of
mine that was the inspiration for this article, a mono-black build I use to show skeptical non-Magic players how literate Magic can be. After the famous burial area of Westminster Abbey, I call it:

If only there were a Swamp with real-world flavor text, then my deck would be complete. Ah well. I can always hold out for a promo card!