Riiight. What a load of BS. When Randy Johnson was tossed in the second inning (unjustly) of a game during the pennant race Torre had two options:

1) Go out on the field and vigorously defend his pitcher.

2) Chew out Johnson after the game and make it clear that players cannot afford to selfishly hurt the team by complaining to umpires.

He chose option 3: Keep sitting on the bench like a zombie and collect large paychecks. He’s been on auto-pilot all year and that was the proof of it to me. He was never going anywhere because all he has to do is sit on the bench and keep collecting more paychecks. This isn’t football where coaches work for a living. For this he will be elected to the Hall of Fame. Nice job if you can get it, and who quits from that?

Moving on, this is what I would run if States were this Saturday:

[I’ve been calling this deck The Secret of Nimh since I received a more ratty decklist last week. – Knut, sure nobody cares] 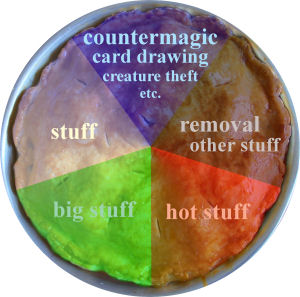 Before I elaborate on the future I want to say that the deck this is based on lacked the Threads of Disloyalty and instead had Nezumi Shortfang. This list is designed to own White creature-based decks. When sideboarding you can remove 9 men (4 Graverobber, 4 Hypnotic Specter, 1 Kokusho) and put in 4 Execute, 2 Threads, 3 Eradicate/Persecute (depending on which you prefer at the time). The Eradicate/Persecutes are not necessary and you can have a phenomenal matchup. Only the three-mana cards are in the sideboard for White Weenie. The rest are there for Blue control. Yes, mono-Blue might once again be the best deck in the format. They took away Vedalken Shackles? Move Threads of Disloyalty into the maindeck. No answer for Hypnotic Specter? Who cares! Make them deal with Meloku and Keiga. Countermagic and card drawing are still the most powerful abilities in Magic, and creature theft is right up there. Blue still has the good part of the color pie and that’s the way life goes. Of course Black can make Blue either counter or suffer the consequences. Keiga? Meet Eradicate. Tapped out to Threads my dude? Persecute. Extraction is a bit trickier and requires you to have some feel for what you need to remove to win. It is more in the sideboard for combo decks and it is possible there are better options. The original listing had Slay, Clutch of the Undercity, and Hideous Laughter in the sideboard. Laughter just doesn’t seem that great when White boosts the toughness of all their men (power too, but not relevant right now). Slay just has surprisingly few good targets. Clutch of the Undercity is actually a tough cut for me. It can become Persecute/Cranial Extraction/Gifts Ungiven/Eradicate/Nekrataal or it can bounce a card and make your opponent lose 3 life. Apart from Worship that isn’t hugely important, but it can be helpful. Kokusho is the weakest of the legends and could be Meloku #2, Kagemaro, Death Denied, or something else entirely.

I’m afraid this just isn’t that complicated a deck. It is about using Umezawa’s Jitte/Gifts Ungiven/Overpowered Legends and killing/stealing anything that moves. Not much more. There is clearly room for some creativity and I encourage you to modify. I would personally have 1 Clutch of the Undercity in the sideboard somehow. [I worked with Seth on this deck for the last week and I agree, though we didn’t talk about this last night. I hate the idea of getting mashed at States by one permanent you just can’t deal with. – Knut]

Some other quick notes:

If there were some way to consistently draw Greater Good…

Footsteps of the Goryo

When this deck draws the cards in the right order it just smashes. If you want to play a little more straight up you can run some other large men (did you know we have Verdant Force available again? I didn’t). I feel like the tools are their but it is hard enough to draw a large man, a draw/discard outlet and a reanimation spell without worrying about Greater Good itself. On the other hand, going off with this deck is literally the most fun you can have without Jessica Alba. 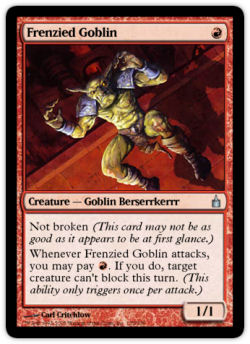 Just because I feel like rambling about Magic, no card betrayed me more than Frenzied Goblin. It isn’t broken! At first I was bitter that it had to be attacking to be useful, so the ability didn’t have haste. Then I learned it only works once! How sad! I do think it is still possible to play aggressive White:

4 Ninja of the Deep Hours

1 Sunhome, Fortress of the Legion

1 Oboro, Palace in the Clouds


Yes, this is a bit different. A case can be made that either the Blue or Red should go and I wouldn’t argue, but I’ve had so much fun with the deck. WW just isn’t supposed to be able to do that and this deck just surprises people. Obviously the numbers are very flexible.

I must ask: Why is Lightning Blast a common and Char a rare? I was completely shocked the first time I actually saw a draft of this format at what was rare and what was common or uncommon. It just struck me as really odd and I wonder how difficult it will be to build certain decks.


I just saw a really cool deck from Adrian Sullivan but I am not at liberty to share it. Hopefully he will write about it post-States.

I still am not completely sure how the Vikings got this bad. I understand the offense lost Moss (which was catastrophic), and lost its best offensive lineman (close to catastrophic), but why has the defense been so awful, wasn’t it supposed to be better?

Unfortunately the Patriots are finally so ravaged by injuries that even if the Colts beat them in Foxboro I will still doubt that the Colts are better than the Patriots were. However, the Colts seem to be well above anyone else in the NFL right now, even if they are playing a fairly soft schedule.

The umpiring has actually been so bad this postseason that I am reminded that the owners almost got away with covering up the 1919 White Sox scandal. In baseball if an umpire is giving one pitcher strikes that the other isn’t getting you have as unfair a game as can be played and that is what happened to the Cardinals game 4. Similarly the Angels were brutally hosed by an umpire that has no rights being in the major leagues this fast let alone in the playoffs. I can only imagine the conspiracy theorists coming out of the woodwork if the Yankees had been the beneficiaries instead of the White Sox. Ditto Mets/Astros although to a lesser degree.

Speaking of New York teams, I am convinced Isaiah Thomas is still completely loyal to the Pistons. Nothing else makes any sense. I guess I should be glad, he’s saving me close to $100 a year on Knicks tickets.

I can’t decide whether hockey is back or just a reasonable facsimile. I won’t know until I actually go to a game. Right now it seems to be something quite similar to hockey, but missing some vital elements, such as the ability to clear offensive players away from the front of the net without a penalty.

Has anyone else noticed that the two political parties currently fighting for power are the Republicans and the bureaucrats? Apart from the prosecutor in Texas who seems to have Delay by the short hairs, the rest of the GOP problems are coming from the lifers who form the backbone of the government. The CIA is so nakedly anti-Bush you would think they would buy ad time in the ’06 elections. Frist and Martha Stewart seem to have a lot in common these days. Michael Luttig is currently wondering how exactly he got passed over twice for the Supreme Court. I must say how does a GOP Senate combined with a GOP president equal a Supreme Court nomination the could go down in flames? It’s far too early to predict ’06, but this is truly one of the weirdest political years I’ve ever seen. GOP infighting just didn’t exist when I was growing up. It was the Reagan credo to never speak ill of a fellow Republican. As coach Vince Lombardi might say “What the Hell is going on out there?”

Did anyone else catch Topalov’s absolute butt kicking at the Fide championships in San Luis? He won six of his first seven rounds, only drawing with Anand. Four of his wins came with black. He then drew out to claim the title. It was positively Fischeresque.

Teen Titans could do a whole season just battling Control Freak. The possibilities are… endless. He’s also just so much more fun than most villains.

I bought Shadow of the Colossus today. I don’t have much free time as is, but I really want to play it this week. It looks gorgeous and I love games that don’t try to do more than they should. No random fights, just you and a lot of really big dudes. And your horse. I’m psyched.

The more I think about it the more I suspect that a few Shortfangs will find their way into my B/U list by Saturday. Not that I am playing. It goes Football/Shadow of the Colossus/Magic. Them’s the breaks.

This is a weird Type II. I hope everyone has fun and States. Good luck and may we have 50 State champions with 50 different archetypes.