Grand Prix Providence told a slightly different story with four copies of B/G Delirium in the Top 8, two copies of Vehicles, and a single copy of W/U Flash. B/R Zombies was the last deck to round out the Top 8.

I participated in the MOCS Playoff event this past weekend, another major event won by B/G Delirium in the hands of Lukas Blohon.

I wrote last week how I was disappointed to have played a version of B/G Delirium at the Pro Tour, but how I actually thought the deck was bad for the Pro Tour and it would be a good deck moving forward.

I put my money where my mouth was playing a nearly identical list to the deck I posted in that article in the MOCS Playoff. I finished with a 5-2 record and was overall happy with the deck choice.

With three decks seeming to be in the driver’s seat in Standard, I think B/G Delirium is the best choice of the three right now. W/U Flash and Vehicles are both solid matchups thanks to Ishkanah, Grafwidow.

Though B/G Delirium posted excellent results, winning a Grand Prix and the MOCS Playoff, a lot of the versions of the deck are drastically different. Let’s take a look at four of these deck lists and compare and contrast the different versions and see if we can come up with the best version.

Let’s use Dave Shiel’s Decklist as the “stock” list, as it most similarly compares to what I posted last week and what I played in the MOCS Playoff:

Oddly enough, before this weekend, I would have said to play fewer Tireless Tracker maindeck.

Tireless Tracker is mediocre against the Vehicles decks but pretty solid across the board other than that. Testing for the Pro Tour, it felt like a Warpath Ghoul too often, but the format has slowed down a bit with less Aetherworks Marvel and less R/G Energy running around. With B/G Delirium sure to take on a bigger portion of the metagame moving forward, I like an increase in numbers to maindeck Tireless Tracker moving forward.

The other distinguishable difference from other decks is the inclusion of Sylvan Advocate over Grim Flayer. Grim Flayer is phenomenal but does have some issues when on the draw. I still think I’d prefer Grim Flayer because casting Ishkanah, Grafwidow with delirium on turn 5 is just too important against the aggressive decks of the field. Grim Flayer also has a much clearer path than usual as a lot of creatures enter the battlefield just to crew a Vehicle, leaving Grim Flayer unimpeded. Additionally, there are a lot of creatures such as Veteran Motorist that trade with Grim Flayer but still allow us to get a critical trigger in to get delirium going. Sylvan Advocate doesn’t efficiently block enough of the creatures in the format better than Grim Flayer for me to make this switch. 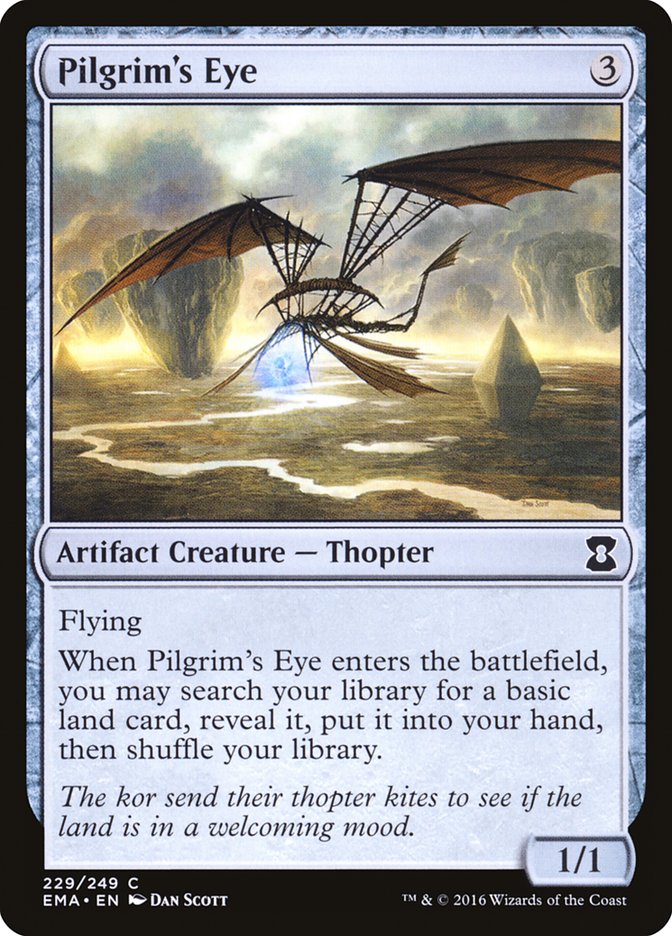 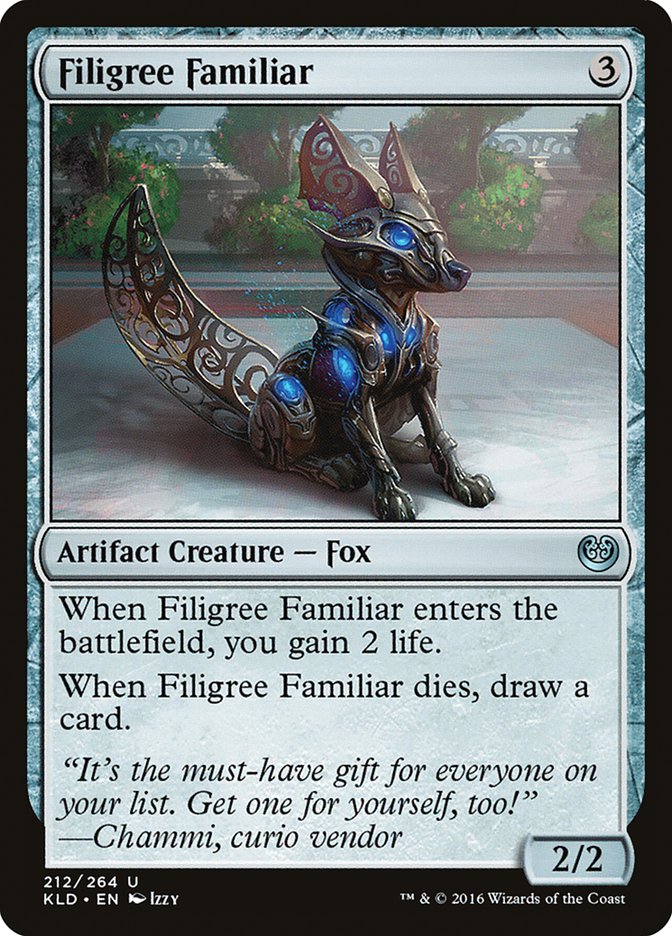 Another difference is the exclusion of an artifact creature such as Pilgrim’s Eye or Filigree Familiar. Drawing Pilgrim’s Eye often feels bad, but it does generally get you delirium quickly. With no Distended Mindbender, it might just be better to include more Tireless Tracker. I would generally like to have at least two artifact creatures for card types, while Yichen only has the single Noxious Gearhulk. 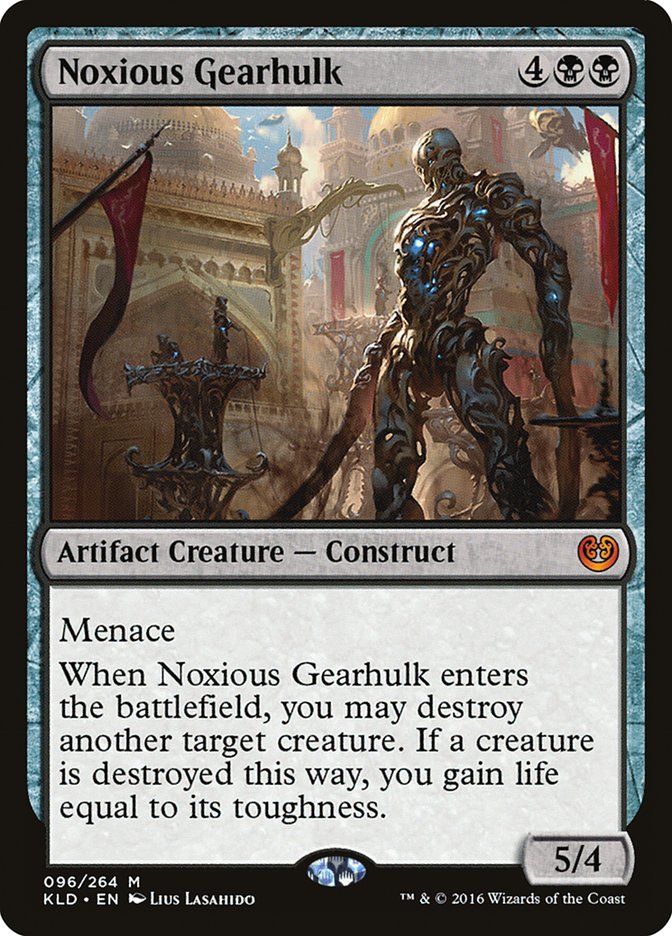 Noxious Gearhulk is pretty average to below-average against some of the creatures in the format. Selfless Spirit and Archangel Avacyn are both huge problems for the card and it can’t even kill Vehicles. However, Noxious Gearhulk is one of the best cards to have in your deck in mirror matches. You can often set up battlefield positions where you have a Liliana, the Last Hope on the battlefield with four or more loyalty and a Noxious Gearhulk in your graveyard in the face of an opposing Emrakul, the Promised End. Just having one copy of Noxious Gearhulk in your deck can make a huge difference in being completely dead to Emrakul, the Promised End or having a reasonable shot at beating a resolved Emrakul.

Moving forward, I’ll certainly maindeck a copy of Noxious Gearhulk as it’s also an artifact to help with delirium. Noxious Gearhulk also lines up really well against Verdurous Gearhulk decks generally by killing a big creature, gaining some life back while also having a 5/4 that can usually trade with the leftover opposing creature.

Transgress the Mind maindeck seems like a reasonable choice moving forward, but in a format that can be so fast, I generally like to attack the battlefield when I can so I don’t fall too far behind, especially in the absence of any sweeper effects like Languish. Ishkanah, Grafwidow is our only real way to catch back up in these spots. If the format slows down, I think Transgress the Mind is a reasonable choice moving forward, but I’d likely leave it in the sideboard.

The major difference between these two decks is the inclusion of Mindwrack Demon in Seth’s decklist. Mindwrack Demon is a card I’ve typically hated. The liability of casting it without delirium and potentially not getting delirium seems like too high of a downside for not enough payoff to me. Delirium, however, is more important than ever without a sweeper effect, because when you fall behind on the battlefield, only Ishkanah, Grafwidow can save you, and it does a good job of that as long as you’ve done your part in getting delirium.

It’s possible Mindwrack Demon is a good way to achieve delirium while also having some impact on the battlefield, unlike a card like Vessel of Nascency where you spend three mana and get no immediate impact on the battlefield. Mindwrack Demon can come out ahead of Gideon, Ally of Zedikar on the play and pressure it in the air, which is a huge upside. Mindwrack Demon also lines up well against another problem planeswalker, Chandra, Torch of Defiance. The more I think about the applications of Mindwrack Demon, the more I’m starting to like it. It’s competing in the four-drop slot with Kalitas, Traitor of Ghet, but maybe there is room for both, like Seth has here.

Lukas also has three Tireless Trackers in his maindeck while only having a single Kalitas, Traitor of Ghet. Lukas is down to two Vessel of Nascency, a trend that all of these decks seem to be moving towards, while including a copy of Sinister Concoction and Dead Weight to replace the missing enchantments. Lukas, like Seth, also cut down to 23 lands but has four copies of Evolving Wilds to accompany his uptick in maindeck Tireless Trackers. Four Evolving Wilds is also likely the reason the Vessel of Nascency numbers went down while the Grapple with the Past numbers went up to a full four. If you’re going to build your deck with four Evolving Wilds, it’s smart to realize you’ll have far fewer turn 1 Vessel of Nascency opportunities.

Tooth Collector is a sweet addition to Lukas’s sideboard, an effective way to essentially kill two one-toughness creatures in a single turn. I’ve been super-impressed with Lilana, the Last Hope against R/W Vehicles and Tooth Collector is doing a lot of the same thing, except you can also Traverse the Ulvenwald for it. I’m excited to try this out.

After analyzing these decks, I’ve learned some things.

Tireless Tracker’s stock went up. When a format slows down and you have time to spend mana cracking Clues, Tireless Tracker is the truth. An efficient threat that also produces tons of card advantage is great when the format settles down. 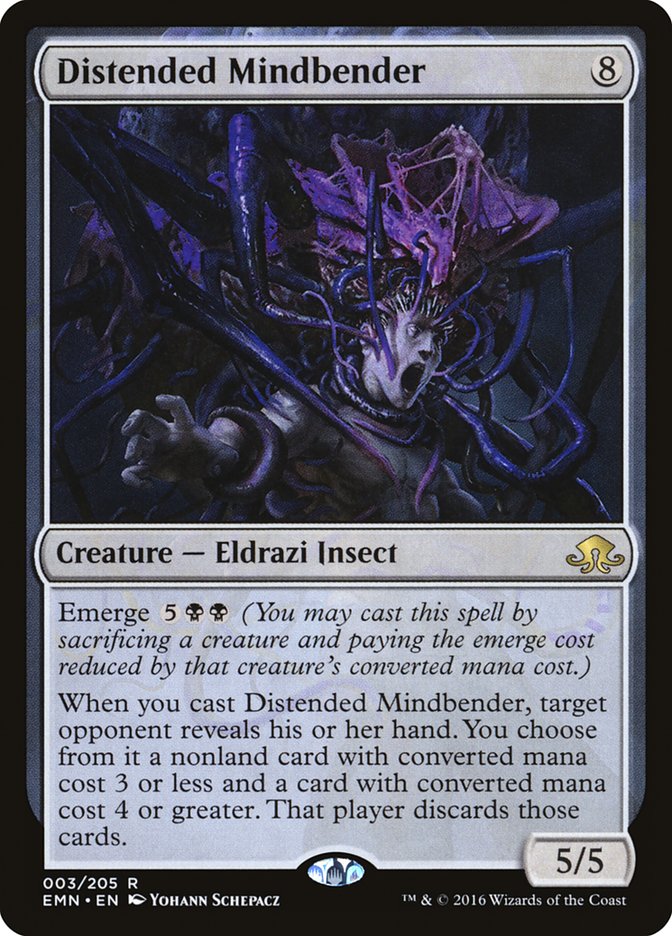 Distended Mindbender is likely bad. We included it at the Pro Tour as a way to interact with Aetherworks Marvel and Temur Emerge, and as a decent card in the mirror. I think it’s dated.

Playing 23 lands is probably correct. The deck has tons of access to lands with Pilgrim’s Eye, Traverse the Ulvenwald, and Grapple with the Past. I can probably trim a land from previous lists. Flooding is a huge cost because it also generally means you’re not achieving delirium.

After playing this weekend, watching coverage, and analyzing these decklists, this is the version of B/G Delirium I want to try moving forward:

Now let’s figure out how to sideboard.

It’s possible you want Transgress the Mind on the play against these decks for Gideon, Ally of Zendikar. I think Gideon is very beatable without it, however.

We can cut a Grapple with the Past for Liliana, the Last Hope as well. It’s possible we want Mindwrack Demon too, but it lines up poorly against Reflector Mage. Instincts say to just cut Mindwrack Demon.

B/G Delirium, W/U Flash, and Vehicles as the format’s standout decks, I think B/G Delirium is the deck to play moving forward. I played it at the Pro Tour and thought it was a mistake, but the metagame has shifted into a place where I think B/G Delirium is a favorite against all of the major decks in the metagame. I think all three decks are good choices, however, and wouldn’t fault anyone for playing any of the three. The last deck I’d be interested in revisiting is B/G Aggro Delirium, but I think it lines up poorly against the traditional bigger build with Emrakul, the Promised End, so I’d be reluctant to play it right now.

Usually I’m a little burnt out after a Pro Tour and don’t really like to play Standard until a few weeks after, but I’m actually really excited to try out some new decks and ideas this time around. Let me know if you have any questions or comments about B/G Delirium moving forward!