Hello, and welcome to this week’s installment of Sullivan’s Satchel. After a seemingly unlimited supply of drama the last few weeks, the Magic community seemed content to focus on Theros Beyond Death, and most of the buzz seemed positive. When the biggest complaint is that maybe a six-mana, two-color rare might be better as a mythic, that’s a resounding success. Even without the cheap heat, plenty of great questions this week —please send yours to mailbag@starcitygames.com. With that:

I’ve seen a lot of discussion about the mana in Pioneer being too bad. Should Wizards consider some emergency addition of dual lands (or something else) to help the format?

I think it is fair to say that Pioneer is a little long on monocolored decks, relative to what’s desirable long-term. Part of that is the power level of Mutavault — even independent of tribal synergies, it’s among the most powerful cards in the format. And part of it is the relative lack of powerful mana fixing, especially among allied-colored combinations. These factors multiply each other — it’s a high bar to play a second color in lieu of Mutavault even if fixing was good. The fixing isn’t, and the card pool is deep enough that additional colors aren’t a prerequisite to cobble together enough playable cards. The sort of Level 1, slug response to this might be “ban Mutavault,” but I think subsidizing tribal, and combat in general, is a good place to spend some power points. 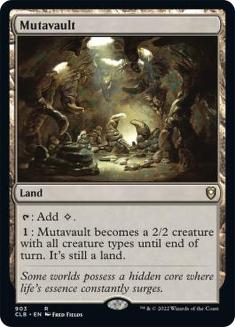 When I say that Pioneer is short on multicolored decks relative to what is “desirable,” it isn’t because the relative lack of them runs counter to expectations. It is because I think multicolored decks are more fun, dynamic, and customizable than monocolored decks, on the balance. Monocolored decks aren’t harmful by any stretch, and lots of players identify very closely with their favorite color, so the goal shouldn’t be to round their representation down to zero. Still, I think the ideal metagames err slightly towards multicolored over mono-, and Pioneer isn’t there right now.

Ultimately, this is fairly low on my list of priorities, and is well below a bar I would consider availing extraordinary measures to change. Even if I think multicolored should get more support, it isn’t an issue in any of Magic’s other competitive formats, and it isn’t a bad thing for each format to have its own character, even if that format has to pay some light cost in absolute quality. Part of the reason to have a bunch of formats is to allow people to experience different cards, incentives, and restrictions, and on the balance I think the temporary novelty is probably net-positive when weighed against the cons.

The larger consideration for me is how quickly non-rotating formats accelerate to their “finish line.” New formats start the same way — people are brewing in a new environment, a couple of outliers get banned, and slowly but surely, with enough tournaments and articles, the format becomes solved. With rare exception, the only things that change this are bannings or a significant injection of power into the format. Both of those options come with tremendous costs, as Modern has demonstrated over the past few years.

Things are novel right now because they are new. When Wizards of the Coast (WotC) introduces some multicolor lands that are powerful (or whatever), things will be novel again, because deckbuilding space opens up. By introducing those cards sooner, WotC would contract the total amount of novelty the format would have before having to utilize the aforementioned extreme measures.  I think that any sort of “emergency” add (like declaring some number of multicolor lands outside the format’s sets to be legal) fails to meet a reasonable standard by such a degree that I won’t address it further.

This state of affairs is temporary, anyway. WotC has a track record of making a lot of pushed multicolor lands. They are aware that this is a bit of a blind spot for Pioneer right now, and could be an opportunity to make one, perhaps several, cycles of lands that hit harder than their power level would typically permit. I think the format would be well-served with better mana fixing in the long-term, but things aren’t so problematic in the present moment to push any panic buttons.

What are your all-time favorite constructed formats?

This is a tricky question because it is hard to divorce being immersed in Organized Play (or just the process of improving) against the quality of the games themselves. For example, my first “competitive” FNM deck was a Smokestack land destruction deck. The list has been lost to the sands of time, but from recollection:

My friend Anand Khare had a similar deck (splash black for Dark Ritual + Yawgmoth’s Will, plus Raze, which is sweet with Yawgmoth’s Will) and after FNM we would go to Dunkin’ Donuts and play hours of this “mirror” match. The games came down to decking not-infrequently These are some of my happiest Magic memories. I doubt I could play a game of it now.

The first Constructed format I really loved, and played at a legitimate competitive level, was Invasion Block Constructed. I suspect the format would hold up okay under the type of scrutiny that present-day formats get played at, though it’s probably not as healthy as I recall. The two defining features of the format, in contrast to previous Block Constructed formats, were plausible mana fixing (both depth and quality) and a deep pool of power, specifically from Apocalypse. Many people played decks that could best be described as “three-color cards I find appealing,” and even if those decks weren’t good in absolute terms there were enough powerful cards that they at least have the veneer of legitimacy. The games had a good blend of “battlefield presence” compared to “accruing advantages on other fronts,” and lots of curious decks populated Grand Prix and Pro Tour Qualifier Top 8s. 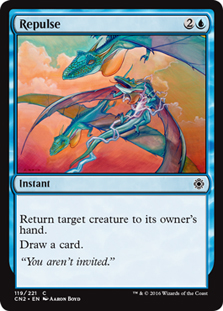 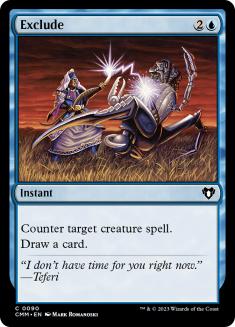 The format wasn’t without issue. Repulse and Exclude were two of the defining (maybe the defining) cards, and they were hostile towards all the Spiritmongers and Lightning Angels that showed up less than their rate and appeal would suggest. Collective Restraint (a foundational part of the Five-Color Domain strategies that were reasonably popular and successful) is well out of bounds by present-day sensibilities. Maybe a higher profile and tighter iteration cycles would have shrunk the number of decks down in a way that didn’t happen in 2001. But I remember a ton of decks and the games being good, and I hadn’t felt that combination before in tournament Magic. I think I would have found tournament Magic to be compelling even if the games were never that good, but Invasion Block Constructed made me love it.

From a coverage perspective, I’ve always preferred a little bit of everything. The first Wasteland mirror inspires a sort of joyful nihilism; a thousand times later and there isn’t much joy left. I thought that Khans of Tarkir was a high water mark for Standard over the last decade or so. Related, I think that Siege Rhino is the perfect place to put a lot of power because people can engage with the “problem” in so many different ways (go under, go over the top, make the game about something else, etc.) and these solutions actually emerged in real life. Thragtusk and Huntmaster of the Fells made for good foundational pieces for similar reasons, but Siege Rhino appeared in a format with a deep pool of mana fixing, meaning people could mix-and-match their perceived answers in a variety of ways. Even with Abzan being at “best deck” status for two years (with some fluctuations and different iterations) the format never felt stale, which is a very hard thing to pull off. 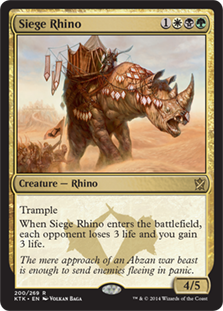 I like Modern the most when the decks feel like a combination of “souped-up Block Constructed” meets “celebration of the large card pool.” Feels like the format’s conceptual ideal state. It’s very hard to manage the play patterns of decks when the card pool gets to that size and power, so I’d rather shoot for “a wide array of decks with personality” than some ideology around what turn the game ends or what the best cards are supposed to be. I’m optimistic the latest round of bannings gets the format back towards that direction.

I want to know the top ten basic mountains.

I guess that’s not a question, and I’m also going to guess that James is asking about artwork. I would not include the Arabian Nights Mountain among my favorite pieces, in spite of how frequently I play with it. That is more of my affinity for old cards and quirky features of early Magic than anything to do with that art in particular, though I do like it fine. I don’t think I can do ten because my rankings fall off a cliff after my Top 3, but here they are:

All three of these Mountains hit the right notes for me: I really enjoy the art, they are all tonally appropriate for the set they were in, and there’s a heavy nostalgia factor. All three are affordable as well, so if you want to drop a little bit of money on a playset of Mountains, I give all of these my recommendation.