Hello, and welcome to this edition of Sullivan’s Satchel.

This deck absolutely slaps right now. I’m on a ten-match win streak on Magic Online (MTGO), which you would perhaps be more familiar with if they posted my recent 5-0 in the deck dump instead of another Burn list with three Sunbaked Canyons, three Fiery Islets, and no blue cards.

I had cut Path to Exile for Tormod’s Crypt but made the switch back. Part of that was Tormod’s Crypt — it only came in versus Living End, which isn’t that bad of a matchup to begin with and against whom main-phase reaction is low-yield due to Grief and Force of Negation. I was losing too frequently to Murktide Regent for my liking, and so now we’re here. I’ve been hesitant to play a Fiery Islet before because of how good Kor Firewalker is in the right matchups, but I wanted to do some exploration with a stray blue source with Prismatic Ending in the sideboard. That element hasn’t come up very much, but the Islet has been good regardless.

The Underworld Cookbook stuff just isn’t that popular anymore and you can hang with the combo decks on a fundamental level. The Izzet Midrange matchup is very positive, especially with Path back in the mix. Prismatic Ending is a lot of coverage against stuff you’re typically bad against without being super-narrow like Wear // Tear. I’m just going to keep doing this for now.

With that, the questions. As always, you can send in yours via Twitter DM @BasicMountain. Normally I would also include [email protected], but that account is locked as far as I can tell, and when I mentioned this to Cedric in his stream chat, a bunch of people called it a “boomer problem.” In any event if anyone on the tech side at SCG is reading this, you know, this is becoming a blocker for the column and I might take a week off or something if it doesn’t get figured out (CEDitor’s Note: It appears “Send me an email” was too difficult a request #boomer).

Because of this, we’re going to do something different. Eric Wong (a Friend of the Satchel™, to be sure) has sent six excellent questions this week, and we’re going to go ahead and answer them all, along with $50 in SCG credit (the usual $25, plus $25 from last week’s rollover.) Additionally, the previous winner still hasn’t received their credit but they sent their question in via email so, you know, sorry if that’s you. I’m doing what I can here to sort it out (mostly complaining on a public platform, hoping to embarrass my employer into taking action.)

Sullivan’s Satchel questions: please feel free to spread these out over multiple weeks, I just wanted to get these out since I have a habit of forgetting good questions to ask:

Given your (in)famous rant on Ravenous Chupacabra, is Infernal Grasp heading into similar “dubious” territory? Or does the fact that the latter is a spell and the former is a creature make a big difference.

The difference between a creature and spell is huge here. Part of my criticism of Chupacabra is the implicit two-for-one; part of it is how easy it is to recur creatures relative to spells. I suspect Infernal Grasp isn’t going to engender the same (theoretical) problems because there are just a lot of ways to kill stuff for two mana, and Infernal Grasp is on pretty loud diminishing returns since you can typically only pay so much life that way against someone who is pressuring you with creatures.

As far as Terminates go, I prefer the “sometimes it doesn’t work but you get something different instead” (Heartless Act) or “it works all the time, but at some cost that has context based on what your opponent is doing” (Infernal Grasp) over the Doom Blades of the world, which are balanced around being blank cards ~20% of the time. There’s room for all of it, and I think the Heartless Act approach is the healthiest of the bunch, but Infernal Grasp is closer to an execution I do like than don’t, if that makes sense.

Given the reception of Lorwyn and Ixalan, are tribal blocks inherently more difficult to design than other faction-based sets like Ravnica, Khans of Tarkir, or Strixhaven? Or are the issues with the former two sets due to other factors and R&D just hasn’t hit found the sweet spot with tribal design?

I think creature-type-matters is a bit trickier to design, because you have to thread the needle between “give everyone the same nuts and bolts stuff we know we need to give them to make this stuff work” and “don’t make all the creature types feel exactly the same,” and I think it puts more pressure on the individual creatures with the supported types to be more powerful than would be ideal in the abstract. I think Lorwyn is especially “noisy”— all the commons call out other stuff in some form or fashion, and there’s a real lack of “normal” cards that communicate what the type is about without some heavy-handed reference.

Ixalan is subtle enough that it doesn’t really come across as tribal in the first place. I think Onslaught does the best job in Magic’s history of making the types feel distinct, and letting the names, tone, and mechanics carry the definition instead of making a million lords and other callouts. That set has another list of problems altogether, but I love the execution of tribal there.

Mark Rosewater stated that the main reason for doing mythic rarity was because they saw other games having more than three rarities. What is the design benefit of having “extra-rare” cards and do you think Magic has net benefited from having mythics?

It benefits design because having two tiers of the “highest” rarity allows the mythics to be more exciting by contrast, and because blind purchase model booster packs purchases tap into addictive behavior and having more lottery tickets makes that more sticky. Anyone claiming a mechanical necessity is full of it, but it’s definitely been a net-positive for Magic’s bottom line. I’m also not a believer that owning every card should be a prerequisite for enjoying the game, which isn’t a consensus opinion among people who dislike mythics, the Reserved List, etc.

What are your thoughts on the four “You Make the Card” designs (Forgotten Ancient, Crucible of Worlds, Vanish into Memory, Waste Not)? I don’t recall you and Cedric going into too much depth on them in the Fifth Dawn and Coldsnap episodes of the podcast, and what do you think about this kind of community-driven, popular democracy method of card design? 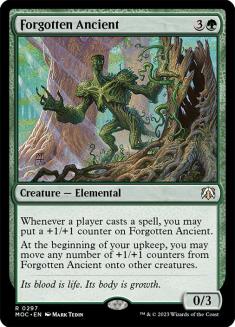 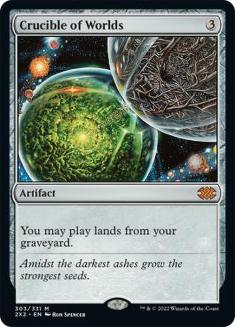 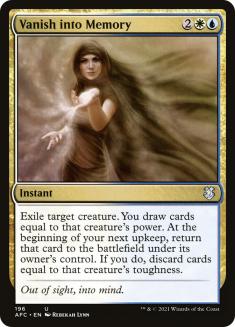 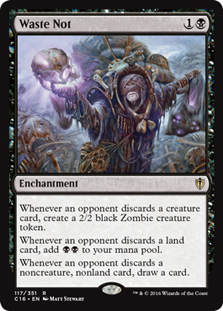 Forgotten Ancient is fun and modest, Crucible of Worlds absolutely sucks, Vanish into Memory is fun and aspirational, and Waste Not is a little unwieldy but inspires some decks that wouldn’t exist otherwise, and a different set of incentives. I wish there was more room for community-driven design, but the logistical burden probably isn’t worth whatever the gains are. I do think it’s fun, and as a set of designs I think those four are of a higher quality than four selected at random, so it doesn’t have to be net-downside on the card file front.

What is the funniest case of pro player mistaken identity you’ve ever witnessed?

About ten years ago, I went to PAX Prime on behalf of Stoneblade Entertainment. A wretched show, but fortunately someone snuck me into the Wizards of the Coast (WotC) party. I was approached by two people who said they were big fans of my work, and who had driven all the way from Calgary, and maybe this is a little weird but could we buy you a drink and chat for a while? I said sure, they were nice enough, the drinks continued to flow, and after about an hour and who knows how many shots I deduce that one of them thinks I’m Patrick Chapin, and the other thinks I’m Paul Rietzl.

At this point I’m too committed to the free drinks, so all I can do is hope they don’t talk to one another to get the whole thing sorted. This evening ends with me storming out once they reveal that Thoughtseize is going to be in Theros, and me getting kicked out of at least two other bars.

Now that you’ve announced being on indefinite hiatus from Magic commentary, does this mean that Cedric will never get the chance to try your eggs?

Cedric is welcome to come to Denver at any time, and my children would be the first to say that for my eggs, it would be worth it. Consider it an open invite.