I’ve been working in Magic content creation full-time for over three years now. Having now produced so many words, spoken and written, I’m starting to develop a pervasive fear of repeating myself. I guess saying the same things over and over could be taken as a signifier of a strong foundational approach to the game that perseveres regardless of the surrounding circumstances. At the same time though, it feels needlessly punishing to my most loyal readers to spend a bunch of time setting up the same premise over and over.

For this reason, I’m keeping my setup this week brief. Come preview season, I look for broken cards. It means I miss a lot, sometimes get halfway there, and occasionally hit it out of the freaking park. Only one card in Innistrad: Midnight Hunt has set my alarm bells ringing thus far. 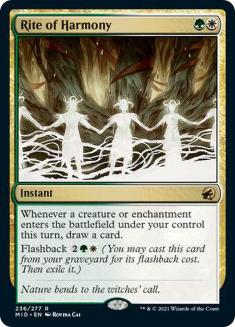 It’s not a big shock that I’m interested in a card with very similar text to Glimpse of Nature — a card presently (wrongfully?) banned in Modern. However, I’ve also built enough terrible Beck // Call decks to know that this text isn’t a free ticket to combo down. If you’ll forgive me for doing a bit of “reciting the card’s text,” I do think contrasting the differences between Rite of Harmony and Glimpse of Nature is an important step for informing our approach come deckbuilding time.

In old Standard, I would have immediately got to work building a Yorion deck to exploit this card. Thankfully though, the sky noodle’s reign of terror has come to an end, and I’m no longer forced to spend every preview season building a bunch of Yorion decks. I don’t immediately see any hard combo potential with creatures in Innistrad: Midnight Hunt so instead we’ll have to look at Rite of Harmony’s potential uses as a value engine. Thankfully, there are some good payoffs here.

Battle for Bretagard is a card I had entirely forgotten about, but after turning it up in my searches, I have to wonder if it is the exact reason that Rite of Harmony is an instant. Casting Rite before Chapter III goes off has the potential to yield big dividends in our deck, and it’s easy to see games played on curve where a Turn 5 Rite is picking us up four or five cards. Of course, we’ve got other go wide payoffs in the form of Toski, Bearer of Secrets and the criminally underplayed Paladin Class. Not only is it working as an anthem, but it’s very easy to visualize end games that come down to simply juicing up a Cave of the Frost Dragon and doing a flying twenty damage to our opponents. Also, we’ll draw a cheap card from Paladin Class after our Rite of Harmony. Why not? 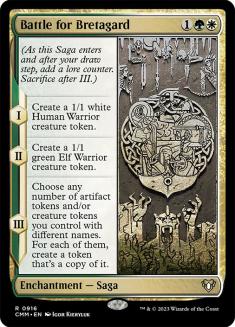 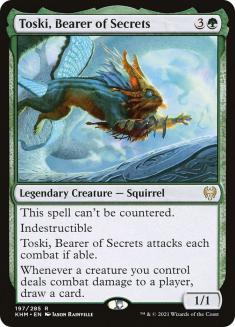 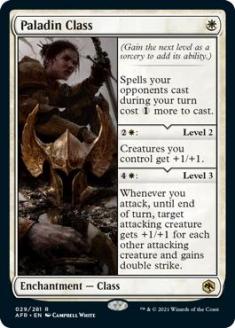 So many of the gameplans here seem solid. We’ve got light disruption, loads of card advantage, and a real immunity to spot removal. Of course, sweepers are strong against any deck looking to get wide, but sideboard Elite Spellbinders, Felidar Retreats, Guardian of Faith, and Curse of Silence all give us some potential to play around whatever the sweeper of choice ends up being. Another weak point now is whatever aggro deck manifests, but Brutal Cathar is going to carry a lot of weight there. Once there’s some more clarity on where the aggro threat is coming from, maybe we can dip into some other answers.

No look at a Glimpse of Nature replacement would be complete without a peek at Elves.

Elves synergies have felt close for a while now, and I think the right mana sink might be just enough to get the job done. Tyvar Kell ensures that we’re never hurting for that mana, and Harald Unites the Elves is almost always worth at least two triggers from a Rite if not more. The biggest explosions are going to come when Tyvar Kell is able to untap a Circle of Dreams Druid with a full battlefield, and that should be extremely possible if you ever get to keep an Elvish Warmaster on the battlefield. These scenarios allow you to go off with a flashbacked Rite, and the fact that Harald Unites the Elves is occasionally going to turn one up as a freebie bodes well for this archetype’s viability.

Can’t Stay Away is very capable of ensuring that key Elves stay on the battlefield, and again, it’s super charged by the fact that we’re already using our graveyard. It’s just awkward that it’s in both of our support colors, so I tried to show some restraint. Could be that the card is too good not to play more copies. 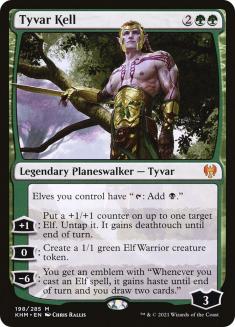 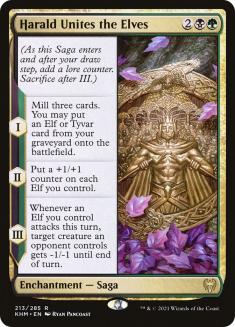 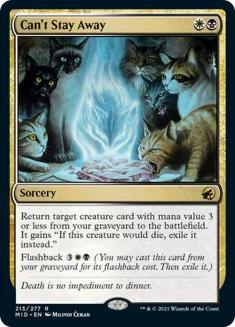 Tajaru Paragon and Skemfar Avenger are also doing the card advantage thing for us, and simultaneously open up beatdown lines just by virtue of adding three power to the battlefield very early. This deck reminds me of classic Elves combo because it’s so ready to present multiple gameplans. If this deck gets another reasonable one-mana Elf, it could very well be one of the top decks in the format. Hope you’re ready to craft those Tyvar Kells.

These decks both seem solid, but we all know you’re here for draw your deck-type nonsense. The good news? It’s entirely doable. The bad news? You’ve got to play a lot of bad cards to get there.

Honestly, I would have bet almost anything that Starnheim Courser and Runeforge Champion did not combine the way I wanted them to. However, since I’m a professional, I booted up Magic Arena and challenged Sparky to a duel. And lo and behold, zero-mana Runes. You probably need a Goldspan Dragon on the battlefield before this translates to anything meaningful, but I also think that Goldspan Dragon plus either one of Runeforge Champion or Starnheim Courser will be enough to get you to a point where you can eventually flashback or find a second Rite of Harmony and go off.

There are a lot of cheap enchantments available in white, and while nobody wants to use Detention Vortex and Candletrap as their removal suite, when you’re just trying to buy time I don’t think they are disqualifying your deck from viability. Heck, in a pinch you can even drop them on your Goldspan Dragon to continue big combo turns.

This is a speculative shell, but again, we note when we have the potential to do degenerate things. Drawing your deck on Turn 4 or 5 definitely qualifies.

So does flipping your deck into the graveyard on Turn 3.

Is this actually better than current Modern Dredge decks? Almost certainly not. It’s way more all-in, more vulnerable to graveyard hate, and I don’t think I’ve found the correct kill condition yet. But like I said, it’s real easy to get your entire deck into your graveyard. If you cast a Rite of Harmony and follow up with a fetchland to return even a single Bloodghast, your opponent is probably taking twelve and facing down an army if you’ve found a dredger in the first two turns. That’s messed up.

We’ve also got access to some new card draw that seems tailor made for the Dredge archetype with Consider and Faithful Mending. Of course, these cards require a shift away from red and towards blue, and that’s going to cost us heavy hitters like Ox of Agonas, Cathartic Reunion, and Conflagrate. If you find a way to complete a kill on Turn 3 though, it just might be worth it.

The other interesting wrinkle that this setup provides is a deck that is closer to tapping into a transformational sideboard plan. Can we just become a Mill deck in the sideboard now that we’re maindecking Hedron Crabs? In some matchups it may be viable, and a hell of a way to steal a tournament before anyone is in on the joke.

Rite of Harmony is the Innistrad: Midnight Hunt card with the highest ceiling thus far. I’m honestly hoping this is another lark, and I’m eventually proven wrong. If it isn’t, get ready to play games with endless cards in hand yet again. Magic is at it’s best when it’s a game of managing resources, and its most broken cards are always the ones that make resource management a moot point. Let’s see where Rite of Harmony falls.