After a few contentious opening weeks of Innistrad: Midnight Hunt where Dimir was dubbed the best thing since sliced mind, then the only thing we could agree on was that Gruul was trash, we’ve finally received our first Arena bots.

Unlike Rakdos in Adventures in Forgotten Realms, I don’t think there’s a single deck that you need to force, but rather a color: blue. Through the opening weekend of Quick Draft, tapping Islands for mana meant your average win rate would be 58.52%, according to 17Lands data, representing 58.14% of all decks.

It’s doing Avengers numbers, only if they showed Avengers on most of the screens at your local theaters and people still went to the movies.

As always, I want to break down where you’ll get value against the Arena AI — the game within the game. The software tends to overrate every rare and most uncommons, so we’ll mostly be focusing on the commons you should see Picks 9-14, affectionately known as the wheel. If I told you that you could have three to five “extra” draft picks compared to other players, would that be something that interests you? 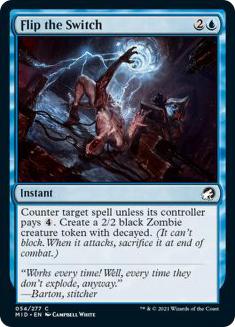 Flip the Switch is a premium common, yet the gap between humans and machines is so large here that even Homer Simpson wouldn’t jump it on a skateboard. This is a top seven overall common in any blue deck according to 17Lands Game In Hand (GIH) win rate, yet it’s going a full three picks later than it should. Three-mana counters are usually the opposite of what you want to do in Limited, so bots are leaving it until Pick 9 and later. Winding up with a couple for free in most pods is a chef’s kiss. 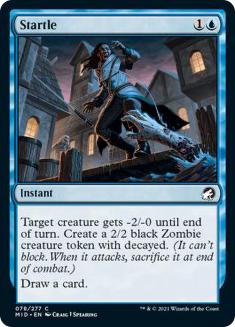 Here we’re wheeling a cantrip that sometimes helps you win combat and leaves a body behind. Sure, blue has some strong commons, but Startle being drafted on average at Pick 9.44 is egregious. This obviously plays best in Dimir and Izzet, where Zombies and spells matter respectively, but you’re happy starting one in any deck. 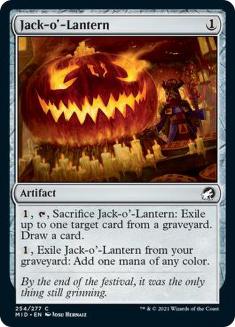 This might come off as a strange suggestion for the core, but I’m currently a big fan of Jack-o’-Lantern in a few different blue builds. First, the bots ignore it completely, so you can have as many pumpkins as you can fit on your porch. Second, it allows you to splash a Light up the Night or Dennick, Pious Apprentice in your Dimir decks without too much of a cost. Finally, having some graveyard interaction isn’t the worst thing in Best-of-One. 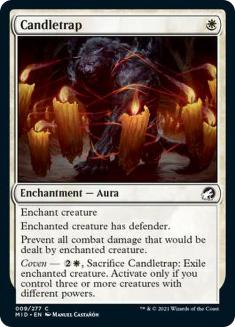 My biggest knock on Azorius is that, like a Kardashian, it struggles without interaction. Fortunately, you can pick up Candletrap around Pick 9. I’ve found coven particularly easy to hit with the help of Homestead Courage, but sometimes you just need to stall a large threat for a turn to win the race. Do I think it’s all that great? No. Am I fine playing one that wheels? I guess. 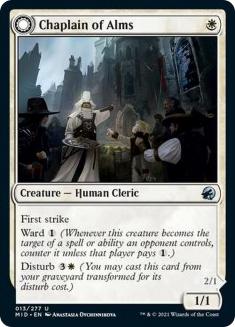 With an Average Taken At (ATA) of 6.39, Chaplain of Alms is going around two full picks later than it does in human drafts. I don’t love the communion-wafer thickness of the body, but you get excellent value when it’s the victim of a mill or pitched to Shipwreck Sifters. Any time the bots are underrating an uncommon, I’m happy to snatch it up.

Overall, Arena isn’t doing things terribly different than human drafters when it comes to Azorius. This comes down to everyone being a little too low on the key commons like Sifters, Blessed Defiance, and Larder Zombie.

You might think I’m kidding, but I’m not. Since sentient beings have decided to avoid green in favor of Esper colors, the bots draft every single verdantly-themed card higher than humans. Other than Pestilent Wolf and Timberland Guide. Not exactly cards that are going to break your deck for you.

To put this in perspective, a Premier Draft pod will take Shadowbeast Sighting around Pick 6.14. Quick Draft is around 3.24. I love Simic when you’re picking up cards like this and Eccentric Farmer a little too late, but that’s only the case if there are no green preferences sitting next to you. The one exception is the spectacular Deathbonnet Sprout, which is available roughly one pick later here.

The decision to go into Simic needs to be heavily based on signals, particularly with a high-value uncommon like Rootcoil Creeper. 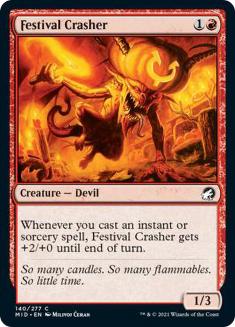 Festival Crasher is a card I’m still seeing wheel too often for my taste, taken at 9.61. It’s a lynchpin of any Izzet Spells deck that needs early two-drops that play nicely on offense or defense. Bots in any other red pairing will avoid the card like it was coughing without a mask on, so consider your festy-besty a solid bet to make it back to you.

Cheap spells that replace themselves are what decks like this are built on, but feel free to hesitate when it comes to Consider, available currently at Pick 9.04. I’m happy to run any number of these and cut lands accordingly as the numbers grow obscene, as it helps you hit your drops in a pinch.

One large caveat with Izzet: the bots are bonkers over Storm Skreelix and Seize the Storm, taking them two full picks ahead of humans. Even seeing a late Skreelix isn’t a sign that it’s open, as the Seize doesn’t wheel in this pod. The biggest tell, it appears, is Delver of Secrets, which is going 2.05 later in Quick Draft. When they’re available late, you’re in the clear. 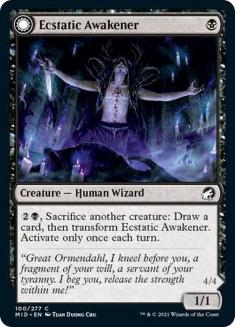 There isn’t a wild difference between evaluation here (-0.68 picks) but Ecstatic Awakener is a card I keep seeing far later than the ATA of Pick 5.47 would indicate. I’m guessing that number reflects a lot of people going “Wait, what?” and moving in on black. In Dimir, Awakener slightly edges out Organ Hoarder for GIH win rate, the latter of which many people are happy to take Pick 1, Pack 1. I particularly love it when we’re loading up on Zombie producers in Startle and Flip the Switch late. 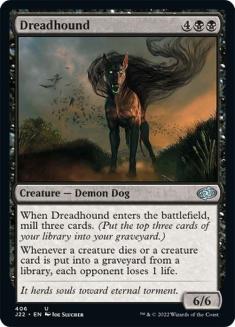 I was surprised to see Dreadhound performing at a similar rate as Nebelgast Intruder and Infernal Grasp. For a deck that doesn’t have a bevy of top-end threats, it’s great to pick one up at Pick 6 and end any game where you have a significant Zombie presence. Humans will take it Pick 3, for reference at to who truly lets the dogs out.

Dimir doesn’t need much help from the bots to be one of the best decks in the format, but beware the trap of Ghoulish Procession. The deck lacks consistent sacrifice outlets to take advantage of the tokens, so avoid the do-nothing enchantment when possible. This is one of the few times the bots are doing better than humans, drafting it three spots later.

We’re locked into Dimir at this point and there’s plenty of options here. I think it’s fair to start by eliminating both No Way Out and Rotten Reunion. Of the two, I’m more likely to start the latter as a way to interact with our opponent’s graveyard, but these are replacement level at best and we should be able to find as many as we need. I’m also not interested in Blood Pact, as this is a format that rewards battlefield presence and finding creatures to give you incremental advantage. Card draw is a poor use of mana broadly.

Rite of Oblivion is very interesting with two Evolving Wilds already selected. I’ve come to sincerely appreciate exiling creatures with the amount of graveyard shenanigans you face in Innistrad: Midnight Hunt. That being said, I really want to save splashing for the bombiest of bombs. This isn’t a color pairing that’s hurting for removal, either, so I’m passing on Rite.

That leaves us with Siege Zombie and Corpse Cobble. Of the two, Siege Zombie is the objectively better card in this deck. With an ATA of 6.27, it’s also the card we’re much more likely to see. I mean, we’re sitting on two already. With the bots propensity to overrate uncommons, I’m taking Corpse Cobble here as the more unique effect. I don’t mind gambling to see if the Siege Zombie wheels.

To be fair, we have other picks this late in the draft, but absolutely none of them should factor into your decision. With zero fixing at this point, I’m not splashing for either the Skaab or Eaten Alive, so let’s go ahead and cross ’em out. Of the remaining creatures, I’m not trying to play Harvesttide Infiltrator if I can help it and agree with Ryan Saxe that Ardent Elementalist is a massive underperformer.

That leaves us with a few different spells to consider. Raze the Effigy is not a card I need three of… ever? As I covered before, Startle should wheel, meaning the correct pick for a grinder is Dire-Strain Rampage. One of the biggest parts of Quick Draft is maximizing the value of your draft, so taking gems or vault progress when possible should always be a consideration. I don’t think there’s twenty gems worth of difference between a deck with Ardent Elementalist and not, so I’m snagging the rare here.

If you’re looking to take the temperature on the early days of Innistrad: Midnight Hunt. I would point out that of the Top 15 cards the bots overvalue, eleven are either green or red. Since I’ve started writing this column, I’ve never witnessed a gulf as wide as this. It’s an Esper world and other decks are just trying to survive.