Innistrad: Midnight Hunt is finally upon us and we can start envisioning the glorious world that is a Standard format without Throne of Eldraine. Creatures with two toughness don’t have to live in fear of Stomp and aggro players everywhere don’t have to warp their decks to have a chance at beating Lovestruck Beast. It’s a new era for Standard, and one that can’t come too soon.

Looking over the cards previewed thus far, I see plenty of graveyard synergies, which is expected from the horror-themed plane, as well as spells-matter cards, so there’s plenty to pique my interest. But at the top of the list is Poppet Stitcher: 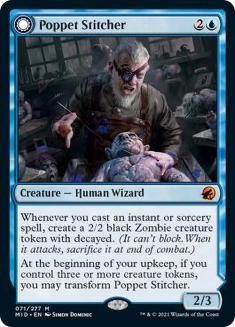 Getting a 2/2 every time you cast an instant or sorcery will quickly get out of hand, so it’s no surprise that the tokens it generates have a significant drawback. The trickiest part of evaluating this card will be just how valuable those creatures are.

By themselves, Zombie tokens with decayed aren’t exciting because they’re essentially glorified burn spells. You’ll get one attack, perhaps at a planeswalker, and then they go away, and that’s assuming your opponent doesn’t have a blocker with three toughness that can get in the way. So you’ll need to do something else to get value from the tokens in order to make Poppet Stitcher worthwhile.

There are plenty of ways to do this, from using sacrifice synergies to generate value from the tokens to mass pump effects to generate a huge attack. But Stitcher comes with a way to upgrade its own creations already baked in, which is the biggest reason I’m high on the card. Simply cast enough spells and Poppet Stitcher will enter the world of management as it transforms into Poppet Factory. 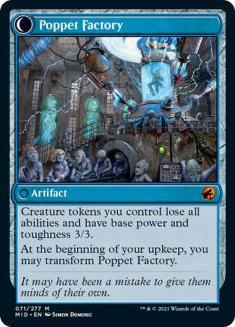 With the additional resources of a Factory, the quality of your poppets improves dramatically, turning into 3/3 creatures that can play both sides of the red zone. Suddenly those irrelevant tokens are major players on the battlefield, making Poppet Stitcher a must-kill threat that in many cases will leave some value behind. That’s a great place to be since the most common low-end scenario is a slightly favorable trade and the best case is a threat that completely takes over the game.

At that point, your opponent will be looking for a sweeper to stabilize the battlefield, which Poppet Factory conveniently dodges, only to let you get back to your roots and start stitching more poppets should you need to rebuild your supply. There’s little hope to come back once Poppet Stitcher gets going.

Ideally you’ll cast Poppet Stitcher on Turn 3, untap with a bunch of spells, and set up to transform into Poppet Factory on Turn 5. That means you’ll want only spells with mana value one or two, and the more ones, the better. A healthy number of cantrips is necessary to keep the spells flowing as well as enough interaction to make sure you don’t fall too far behind while you’re setting up.

The classic combination here is Izzet, and with other powerful options like Expressive Iteration and Demilich to supplement Poppet Stitcher, that’s exactly where I started:

Innistrad: Midnight Hunt is bringing a pair of excellent one-mana spells to supplement this strategy in Consider and Play with Fire, and they really form the backbone of the deck since you need a critical mass of cheap spells to make the spells matter payoffs worthwhile. 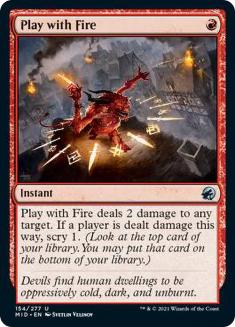 Consider replaces the rotating Opt, and is a clear upgrade for any deck with the barest amount of graveyard synergies. Milling extra spells for Demilich or just Demilich itself can represent a full card of extra value, as is milling any flashback spell. I’d play eight of them if they’d let me, but Wizards of the Coast (WotC) hates fun. And by fun, I of course mean my personal fun.

Play with Fire is more questionable since we already have access to Frost Bite at the same cost that can kill larger creatures like Kazandu Mammoth. But I prefer Play with Fire in this deck for two reasons. First, playing Frost Bite requires you play Volatile Fjord in your manabase, and this deck certainly wants all of its lands to enter the battlefield untapped. Frostboil Snarl may not be that much better, but it definitely is an upgrade, and without Fabled Passage, it’s harder to meet the condition on Frost Bite.

Secondly, Play with Fire’s ability to target anything is valuable in a deck like this that’s trying to cast all of its spells proactively, even the removal. If you play too many creature-only removal spells, you could get stuck with them in hand should your opponent not present a target and be unable to properly enable your cards. This is especially true in control and ramp matchups, which tend to be creature-light, so playing the true burn spell avoids this common pitfall.

The last one-mana spell is certainly less exciting than the first two, but sneakily effective. Secrets of the Key is a flashback spell for your Strategic Plannings and Considers, a one-mana spell for your spell synergies, and offers some card advantage when games go long. Typically these decks struggle to gain a lot of card advantage since they aren’t interested in expensive spells, but you can cast Secrets of the Key early when you need to cast Demilich or trigger Poppet Stitcher, and have the Clue token later in the game to reload should your opponent answer your first wave of threats. It’s not an efficient way to draw three cards, but it does enough to earn a spot here.

The singletons that I chose to round out the list will certainly change as the new metagame takes shape, but they’re all versatile spells that offer unique outs to various permanents. In particular, I think Burning Hands will remain a maindeckable card despite the rotation of Lovestruck Beast and Elder Gargaroth because of the power of the new Gruul Werewolves. 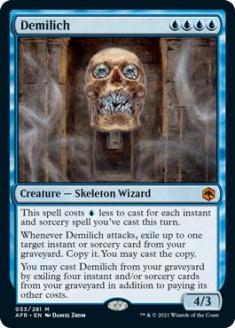 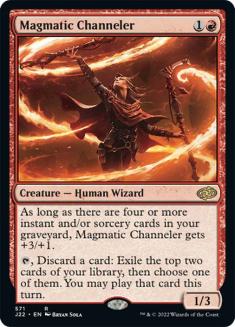 As for the threat base, Demilich and Poppet Stitcher are the core cards. I went with Magmatic Channeler next because I like how it plays early defense against aggressive decks and between Demilich and flashback spells you have quite a few good cards to discard to its ability. There’s some negative synergy between it and Demilich, but if you’re casting Demilich from the graveyard with Magmatic Channeler on the battlefield, you shouldn’t need the size bonus since you’re drawing a ton of extra cards.

Goldspan Dragon rounds it out despite not having a ton of synergy with the deck, simply because it’s so powerful. And you certainly have no shortage of good spells to cast with the extra mana from its Treasures. I wouldn’t be surprised if the number of Dragons goes up as I test the list, but as always I like to start with a list that is focused heavily on the deck’s core synergies.

Next I looked to explore the possibility of using sacrifice synergies to leverage the tokens from Poppet Stitcher. The core of Sedgemoor Witch and Plumb the Forbidden didn’t meet my high expectations from Strixhaven preview season but it can do some powerful things and certainly plays well with Poppet Stitcher. Having an additional token maker also raises the ceiling on Poppet Factory, letting you pump out 3/3s even after Stitcher transforms.

There’s plenty of overlap between the two decks, with the main difference being an ironic de-emphasizing of the graveyard synergies in the black list. This is mainly because Demilich is harder to cast in this list since black is the main color instead of blue. You also don’t have Magmatic Channeler to enable some of the graveyard cards, though milling a Skyclave Shade with a Strategic Planning is one of Magic’s simple pleasures. 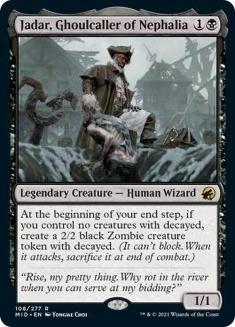 The primary gain from Innistrad: Midnight Hunt by moving into black is Jadar, Ghoulcaller of Nephalia. Like Paulo Vitor Damo da Rosa, I’m quite high on this card and it’s particularly good in this deck. You can sacrifice your decayed tokens to Village Rites or Plumb the Forbidden, or get a head start on building to a Poppet Factory, only needing two spells with Poppet Stitcher instead of three. Of course, once you do have a Poppet Factory, none of your creature tokens will have decayed, so Jadar will pump out a new 3/3 token each turn. It’s the perfect two-drop for this deck.

I’ve also included two copies of the new removal spell Infernal Grasp. Normally I’d play the full four copies of the best one-mana removal spell to keep the curve low, but Bloodchief’s Thirst has the limited-target problem and I wanted some interaction for bigger creatures. Infernal Grasp is a liability in large numbers, but the first copy or two will be excellent since it’s so efficient and versatile. Plus you have Sedgemoor Witch pumping out tokens that gain you life when they die to offset the life loss.

Despite the extra two-mana removal, this list has a lower curve than Izzet, and plenty of card advantage even without Expressive Iteration. The threats aren’t as powerful on their own, but the synergies here are quite strong. I’d like something like Witherbloom Apprentice to raise the potential of Plumb the Forbidden, but splashing isn’t viable with the mana fixing available. I just got the Snarls out of the deck by going from red to black and I’m not about to add any more to try to make a splash work.

Lastly, I wanted to mention one of the key sideboard cards for this deck in Grafted Identity. It’s an excellent way to use decayed Zombie tokens against creature decks, especially big green creatures like Werewolves. It’s powerful enough that I included a copy in the Izzet sideboard as well, but with Jadar and Skyclave Shade, this list takes better advantage of it. I especially like it because the creatures in this list don’t play defense that well, so Grafted Identity can help catch you up should you find yourself far behind on the battlefield on Turn 4.

Innistrad is one of Magic’s most popular planes, and while there are many reasons for that, I’ve always enjoyed visiting because it means a great emphasis on synergy. Whether it’s focusing on a tribe of Zombies or Werewolves or filling up your graveyard for value, the whole is always greater than the sum of its parts in Innistrad.

This latest iteration seems to be no different, and Poppet Stitcher is leading the charge. By itself it doesn’t do a whole lot, but when you build around it with a low curve of instants and sorceries and find ways to get value out of the tokens it produces even without it transforming, you’ll have something quite powerful.