Dominaria United is now for sale, and if you’re anything like me, you’re looking to scoop up some sweet singles from the main set and Commander decks now that people are cracking packs and boxes, and prices are pretty good thanks to an influx of supply.  Commander fans have a ton of new commanders to choose from, with plenty of choices no matter what style of play you enjoy the most. My fellow Commander content creators have put out some great articles to help you with ideas, so be sure to check out Sheldon Menery’s latest:

I really love Studio X’s designs for Commander these days. Rather than just stacking legendary creatures with generic value abilities, they’re much more niche and narrower, which makes them much more interesting to build decks around.  Take, for instance, three new legends for Rakdos fans that have caught my eye: 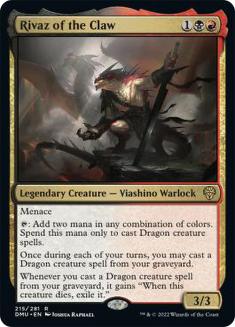 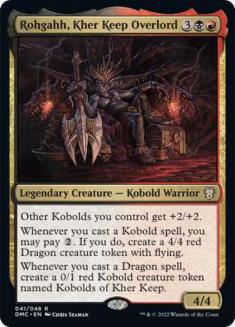 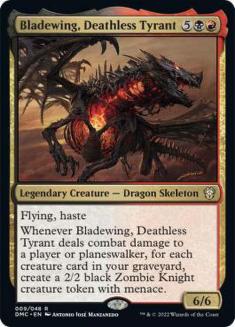 What’s really cool about these three is how they have Dragons on the mind, but in three distinct ways.  I’ll dig into each of them deeper below, but first I wanted to touch on all the various Dragon tribal cards you might want to consider for a new Rakdos Dragon deck.

Unsurprisingly, most of the awesome Dragon tribal cards are firmly in the red side of the color identity.  Commander Legends: Battle for Baldur’s Gate brings some really nice new goodies, including Wrathful Red Dragon, Breath Weapon, and Ganax, Astral Hunter to go alongside old classics like Utvara Hellkite, Spit Flame, and Thunderbreak Regent.  Accessing black unlocks the incredible Crux of Fate, as well as Conspiracy to tie together the Dragon tribe with the supporting creatures that each of the new legends leans into. Dominaria United also brings The Elder Dragon War, another small creature sweeper that provides a little card selection and ends the Saga with a 4/4 Dragon token.

Dragon support the past two years has been quite good, so there is a bounty of good Dragons that provide large bodies and a wide variety of abilities.  Access to black gives us some relatively unused choices, like Immersturm Predator, Ancient Brass Dragon, and the very scary Skithiryx, the Blight Dragon threatening a poison kill.  The new card Brainstealer Dragon provides some nice card advantage and potential off-color spell action.

Even though red provides plenty of Dragons to round out the deck, creatures with the changeling ability are nice ways to tie together the commanders that care about two creatures types: Rohgahh, Kher Keep Overlord especially, but potentially also Bladewing, Deathless Tyrant.  And of course, the amazing Maskwood Nexus will pull everything together quite nicely and even churn out Shapeshifter tokens with changeling when you have extra mana.  Don’t forget the new Black Market Connections creates those sorts of tokens too!

Rivaz of the Claw

Rivaz of the Claw is a nice call back to Zirilan of the Claw, another Viashino creature that cares about Dragons.  You could certainly include Zirilan in the deck if you also have ways to sacrifice the Dragon, blink it, or return it to your hand before it is exiled.

Rivaz isn’t a Dragon, but certainly wants to command a Dragon tribal deck. It’s a mana ramp creature that provides a whopping two mana, but it can only be used to cast Dragon creature spells. It also provides some measure of card advantage by letting you cast a Dragon creature spell from your graveyard once during your turn, but with the caveat that when that creature dies, it’s exiled—much like the rider from Zirilan of the Claw.

To leverage Rivaz’s reanimation ability, we might want to add a few ways to put Dragon creature spells from our library into the graveyard for the late-game. Buried Alive shines here by putting a whopping three Dragons there, and you can bet that Bladewing the Risen would be one of them!

One way to erase the pesky exile rider from Rivaz’s reanimation is to reset the Dragon without killing it.  Conjurer’s Closet and Sword of Hearth and Home are perfect for this, but you can also use Erratic Portal and Getaway Car to bounce the reanimated Dragon back to your hand to recast later.

The new Rakdos legend I’m most excited about it Rohgahh, Kher Keep Overlord!  I own the original Rohgahh of Kher Keep and a fair number of the original Kobold creatures from Legends, so having a good reason to shuffle them together into a deck is amazing!

The thing is, even tapping into Shapeshifters with changeling, there really aren’t enough actual Kobold cards currently to make a dedicated Kobold tribal deck, which makes this card’s design rather ingenious. Instead, just play a bunch of Dragons, and each time you cast one with Rohgahh, Kher Keep Overlord on the battlefield, it comes with a free Kobolds of Kher Keep.  Of course, don’t overlook the changeling cards, since each one can potentially generate three bodies—they count as a Dragon to make a Kobold token, and they also count as a Kobold, so you can pay two generic mana to make a 4/4 Dragon token.

Currently, we’ve got eleven Kobold cards available to us, plus Kher Keep that can generate Kobold tokens when we have extra mana around. Once Game Night 2022 comes out, we’ll definitely want to snag a copy of Nogi, Draco-Zealot, a slam-dunk inclusion for a Rohgahh, Kher Keep Overlord deck. It makes your Dragon spells cheaper to cast, and once you have enough Dragons on the battlefield, it can actually turn into a 5/5 Dragon with flying when it attacks.  It’s a bit of a shame it doesn’t turn into a Kobold Dragon so that it can take advantage of any Kobold tribal boosts too, but it’s still worth playing!

I’d also recommend including the Tribal changeling spells Blades of Velis Vel and Nameless Inversion. Being able to cast them at instant speed means they can create a Kobold and Dragon token out of nowhere to surprise your opponents. Which certainly sounds like fun to me!

Last up is Bladewing, Deathless Tyrant, who doesn’t really care about Dragon spells particularly, but rather just cares about having at least one creature card in the graveyard to generate a Zombie token. If you play other Dragon creatures in your deck, particularly ones that care about other Dragons, eventually they will end up in your graveyard, where Bladewing can take advantage of them to churn out Zombie tokens.

Prime the Graveyard Some More

If you’re not leaning hard on Dragon tribal stuff, there are tons of creatures you can use to prime your graveyard for Bladewing trigger fuel. I leaned on creatures here since, when they die, they’ll count towards the Bladewing trigger too, in a very nice and unholy circle of life and death. I really like Chainer, Nightmare Adept here, since you can trade a creature you don’t need from your hand in order to recast something more threatening from your graveyard.

If you’re including some sacrifice outlets, you might consider creatures that come back from the graveyard on their own.  Gravecrawler in particular is sweet, as Bladewing makes Zombie tokens, which satisfies Gravecrawler’s condition to cast from the graveyard.  Bloodsoaked Champion is another good choice. It can sit in the graveyard to give you a Zombie when Bladewing attacks, which will then satisfy its raid ability to bring it to the battlefield.

Since Bladewing’s ability triggers from combat damage done to your opponent, you can double your fun by getting extra attack steps!  Again, using creatures that do this like Karlach, Fury of Avernus and Hellkite Charger means that when they die later, they can provide Zombie fodder for Bladewing. Another thing to consider is giving Bladewing double strike, with Lizard Blades being perfect for this since it’s an Equipment that’s also a creature.  Embercleave isn’t a creature, but it’s got a great surprise factor that might make it worthwhile.

Another option for Bladewing is to use it to lead a Zombie tribal deck.  Lots of Zombies provide other Zombie creatures various bonuses, and some will eventually make their way to the graveyard, where Bladewing will use them to churn out Zombie tokens that other Zombie tribal cards can make even more threatening. I really like Vizier of the Scorpion because it gives your Zombie tokens deathtouch, which combines to deadly effect with the Zombie tokens with menace that Bladewing makes.  Cryptbreaker is another awesome choice here, since you can discard a creature card that will enhance Bladewing’s trigger, and all the extra tokens will easily let you draw more cards.

Tell me, which of these three new Rakdos legends are you most excited to build around?  What sort of cards will you put in the deck that I may have overlooked here?