Hello, and welcome to this week’s Sullivan’s Satchel. Core Set 2021 just dropped, which I believe is the last set in the pipeline that I didn’t work on. I’m something of a core set enthusiast. I don’t find Magic to be the most fun when it’s a flood of new mechanics and keywords, and I find most core set limited formats to center around nuts-and-bolts stuff, which is what I want from my limited experience. They don’t make them quite like they used to; there’s generally a burden on the core sets to have some mechanical definition, in contrast to the Fifth Editions of my childhood. Still, stuff like prowess is simple and has been repeated enough times, so it can kind of be bundled into the same space as flying or trample.

The last set I would give an unqualified A to was Magic Origins, in large part because it blended simple, enjoyable gameplay with some actually innovative stuff (double-sided creatures that transformed into planeswalkers), and no wild misses for Constructed (I think Jace, Vryn’s Prodigy was problematic more for the surrounding architecture than at a baseline, and nothing else really comes to mind).

Core Set 2021 doesn’t have the same innovation as Magic Origins but it is fun, clean, and doesn’t appear to have any obvious Day 1 outliers for Standard or beyond. The set might serve to demonstrate my current working theory — that some of the cards in the last few sets wasn’t some articulation of “a new normal” regarding rate, but just a couple of misses. It happens. When it happens a few times in a row, it can give the appearance of some intent, but I never thought that was the case. I guess we’ll see, but there’s nothing in the set, at least to me, that looks obviously unsustainable over the course of its Standard life, and “first, do no harm” is a good starting point for any set. With that:

I feel like I’m short on playable cards in my Core Set drafts, or that I see packs without any cards for me. Are you having the same experience? Is this good? I’m finding it very frustrating.

“What is the right number of playables?” is the source of some contention among game design types. There’s going to be some fuzziness, but I think my ideal target would be 25 plausible cards inside of a draft. Fewer than that, and the draft and build might be short on satisfying decisions. More than that, and novice players are likely to be overwhelmed, and more experienced players are likely to presented with a variety of decisions that feel meaningless or arbitrary, yet require the brain space to figure out anyway. “Slightly more than you need” gives the experience of having some agency, and the choices you make feeling impactful but not too daunting. There will be some volatility in those numbers; packs are random and you can’t hit it exactly the same each time. If you err towards 25, part of the range will be 23, or maybe even 22. I still think shooting for that range is appropriate, even at the risk of occasionally leaving people a little bit short.

I haven’t had the experience of coming up short or getting packs with no picks very frequently. I don’t know if this expectation is anchored by previous formats or something else, but I feel like I’m presented a variety of stimulating picks in each draft and usually have a plausible card or two I can cut at the end. Maybe it’s a core set thing — with the mechanics being a little bit less loud you’re presented choices between two fairly simple cards that don’t feel like they support your strategy, even though they do, relative to expectations. My short answer here is that I like the experience I’m having quite a bit and I don’t think it would be improved by slight improvements to cards I usually ignore in the draft or cut during construction, and if anything I’d bet on the opposite.

Any opinions on the Grim Tutor reprint? I don’t think I’ve seen something this expensive printed in a core set before.

I don’t have the best sense of how high of a priority it should be to preserve the value of non-Reserved List cards. I think Grim Tutor is a particularly good option for reprinting in the abstract because it’s an extremely appealing design with some historical punch and isn’t actually very powerful in low-powered formats (should be cut most of the time in booster draft, unlikely to be a problem in the average Standard format, etc.). It is definitely a blow to people who held the old copies, and like I said I don’t have the best idea how to balance that. Maybe it should be the expectation, that anything not on the Reserved List is fair game and that Wizards of the Coast (WotC) will actively seek out ways to leverage it, just like they did with Mana Drain, Rishadan Port, Mana Crypt, and others. 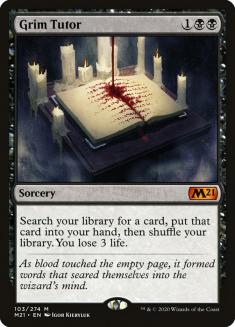 I do like giving it new art, and that along with the new copies having a black border should do some work in preserving the novelty of the older copies. Core sets often sell less well than normal expansions and that plus its mythic rarity might keep the total circulation fairly low. On balance, I think the reprinting is judicious — there just aren’t that many older cards that are highly desired, not on the Reserved List, and not catastrophic for Standard-level Constructed. I think on the balance it makes the world a happier place, and hopefully enough old-school enthusiasts prefer the Starter versions such that the value is at least partially preserved.

There have been a lot of discussions on social media as of late regarding making Magic more inclusive to POC, and I’ve seen a lot of opinions on the issue to say the least. I know I’m not alone in thinking the gathering is one of the best parts of Magic. In your opinion, what are some things the average player can do to help improve inclusion?

Just experiment with shutting up every now and again. I’m serious. Part of feeling comfortable in spaces can manifest as giving yourself license to be oafish and domineering, and that kind of environment, mixed with maybe not looking like everyone else, can make something feel very non-inviting even without something openly hostile or antagonistic taking place.

Don’t ask stupid questions that intimate that someone must have a special reason or at least some story for why they’re at a Magic tournament if they are part of some less-represented demographic. My former partner/wife used to grind PTQs and GPs to some success, played in a few Pro Tours, and still had to endure excruciating interactions from people who “meant well” but definitely weren’t making the environment accommodating, and who had a fraction of the competitive resume she had.

I don’t think there’s one catch-all solution, and calls to action of “be more inclusive” can be hard to put into practice, in part because the environment is damaged by people who aren’t trying to act poorly but do anyway. I guess I’d say try to thread the needle in between “mindful” but not “performatively woke,” and maybe you won’t change representation overnight but you can make things quietly, fractionally more accommodating and it’s good policy besides.

Lastly, the Question of the Week and winner of $25 in SCG credit, from David Thompson:

Jumpstart seems like a fun way to introduce players to the game and to celebrate elements of the game that make Magic great. Let’s take that concept to the real world. If you were to design a series of Magic experiences to introduce players to different ways to play and enjoy the game, what themes would you choose and what activities/experiences would make up those themes?

I enjoyed this question a lot, in part because it requires pulling apart what I think is fun about Magic, or the progression of interests as a Magic player, starting from the beginning of someone’s arc. Let’s assume rules knowledge but nothing besides that (if not, let’s start with “I teach them the rules” and then go from there).