I can’t remember the last time I saw Limited content focused on sideboarding. While Magic Arena’s ranked play is best-of-one, all other forms of Magic require sideboarding.

It’s a fairly popular trope that one of the biggest differences between Constructed and Limited is sideboarding. This isn’t true. In an overwhelming majority of Limited matches, it’s correct to change the configuration of the deck for the second and third games. And, in the scenarios where it’s not correct because the options in the sideboard aren’t enticing, I’d bet that there were numerous opportunities during the draft to pick up more enticing options.

Decks are built in the way that best optimizes win-rate. This is against the whole field of possibilities and permutations. Once it’s time to sideboard, the possibilities and permutations disappear. While there is still some form of uncertainty — the opponent may not draw the bomb that the sideboard card is there to handle — there is significantly more certainty in terms of the expectations of the forthcoming game. The following advice is meant to help with sideboarding decisions. They won’t cover the full slough of possible options, but they outline common misconceptions and heuristics that should make your life just a little bit easier.

The most common example of this is land count. Have you ever been unsure what was correct between sixteen and seventeen lands? That happens to me all the time and I tend to settle on seventeen to be safe. When the decision really is that close, it’s often correct to take out a land on the draw. This is because, in those close scenarios, drawing an extra card changes the math to favor the lower land count.

There are many more examples. Most of them function on a card-by-card basis. For example, many one-drops lose their luster when they cannot be deployed on the play on Turn 1. Maybe it’s correct to slow down an aggressive deck on the draw because of this. Similarly, a slower deck can sideboard into a lower curve when on the play since it’s more likely to be able to capitalize on a fast start.

2. Building off of #1, consider drastically changing the configuration of your deck according to the role you expect to play.

This is the more general corollary to the previous point. On the play versus the draw, a deck can function quite differently. Determining “who’s the beatdown” is a part of every game of Magic, but the fact of the matter is that the person on the play is more likely to be the beatdown. However, there are cases where this role is more nuanced.

Let’s say I win Game 1. The next game I expect to be on the draw. Are there any scenarios where it is correct to sideboard into a faster gameplan on the draw?

Consider my opponent showed me a nearly unbeatable bomb in Game 1. I was able to edge out a victory due to a fast start, but without it there was no way I could have beaten that bomb. In this case, I expect that, in order to win this matchup, I need to assert myself as the beatdown. Is that ideal on the draw? Absolutely not. But it is the best way to get an edge should my opponent draw that bomb.

This also goes the other way. If the expectation for the rest of the match is “if I draw all my cards, I will win,” it’s best to sideboard with prolonging the game as a gameplan. This is where random two-mana 1/3s come into play. They aren’t generally good cards to include in your deck, but they really help facilitate sideboarding according to role.

Lastly, roles aren’t just about who is attacking and who is blocking. Sometimes two late-game decks will both have the tools to beat each other and not care at all about the prospect of damage. This scenario, while infrequent, is necessary to realize before sideboarding. Even good creatures don’t contribute much to the expectation of the matchup. Random bad Divinations and bad counterspells become significantly more valuable than above-rate creatures.

3. Polarizing cards like Disenchant and Plummet are a lot more complicated than “sideboard them in if you see a target.”

Disenchant and Plummet are classic sideboard cards. Their purpose is, almost always, to come in from the sideboard in order to answer a difficult-to-answer card. However, bringing in these cards is a bit more nuanced. 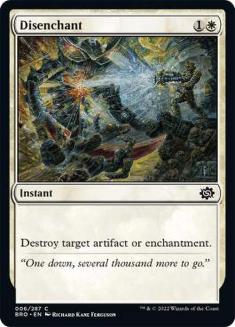 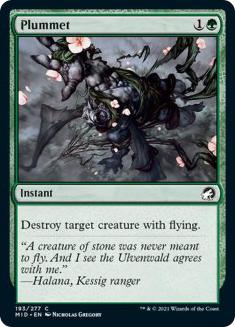 First, it’s important to distinguish a “good target” from just a “target.” I’m never bringing in Broken Wings if I only saw one copy of Tazeem Raptor out of my opponent’s Boros deck. Just because my Plummet or Disenchant has a target doesn’t mean it’s worth the inclusion. They require an abundance of targets or a very problematic one such as Maul of the Skyclave to justify inclusion.

The one exception is expectation. If the Boros deck with Tazeem Raptor example was instead Azorius with Tazeem Raptor, I’m bringing in Broken Wings every time. In fact, even if I didn’t see any flyers, artifacts, or enchantments, I would sideboard in Broken Wings against Azorius. This is because that archetype has access to so many reasonably high-value targets like Shepherd of Heroes, Nahiri’s Binding, and Bubble Snare that I expect every single Azorius player to have quite a few.

4. Building off #2, there are “counters” to everything. When sideboarding, consider if you can “counter” something common or instrumental to your opponent’s gameplan.

While Plummet and Disenchant are the classic examples of sideboard cards, every strategy has cards it’s strong against and cards it’s weak against. Recall the previous example of sideboarding in a two-mana 1/3 when you want to prolong the game. That 1/3 can be thought of as a counter to two-power creatures.

Everything can be thought of as a counter and I strongly recommend attempting to phrase sideboard decisions as, “What can I do that counters what my opponent is trying to do?” I just had an opponent in a Mystery Booster Draft that brought in Millstone against my Approach of the Second Sun deck. The second my opponent cast that Millstone, I immediately thought, “Wow, good sideboarding from my opponent. Winning is going to be very hard from here.” 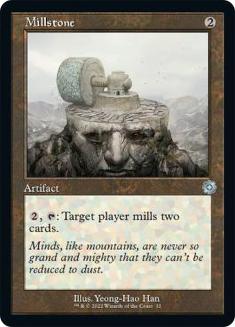 This begs the question of how to deduce what matters and then push that to the next level by figuring out what counters what matters. That is the heart of sideboarding, something Zac Hill has taught me over and over again. In Limited, this often amounts to creating ways to interact with the synergies of an archetype. Blood Beckoning is a solid card, but I rarely play more than one or two. Against Dimir Rogues, I’ll sideboard in four of them. The mill subtheme in Rogues increases the selection from Blood Beckoning, but that’s not enough to justify including so many. However, Dimir Rogues needs to get eight cards milled in order to turn on a variety of synergies and Blood Beckoning removes a card from the graveyard. While this might seem negligible, it has an impact (especially in multiples).

5. The heuristic “cut your worst card for whatever card you sideboard in” is outdated. It’s a fine baseline, but given how frequently it is incorrect, I wouldn’t recommend auto-piloting this decision.

This tip doesn’t come with a useful heuristic but is rather here to tie everything together. There are so many reasons to sideboard, and cards gain so much context within specific matchups. Sideboarding is about creating cohesion regarding the plan for your deck against theirs.

“Cohesion” is a critical word here, because it’s the difference between Limited decks in the last five years and those much older. Limited decks now look a lot more like Constructed decks. Those C- and D-tier cards become B-tier cards with the synergies present. This means that many Limited decks don’t contain dregs anymore. The heuristic for cutting “your worst card” comes from the history of Limited decks containing plenty of bad cards to cut. The problem with this in the modern era is that those “dregs” are very often synergy pieces.

The correct thing to cut is specifically for improvement and replacement with respect to everything I have covered above. If you cannot be the beatdown, you cut aggressive creatures. It doesn’t matter if they’re “better” than the mediocre four-mana 3/2 flyer at common. In the context of the matchup, they’re worse.