If you haven’t, you should start with Emma’s article:

I’ll just shamelessly use Emma’s article as a full introduction.  And hey, instead of padding this section with more words, let’s just get straight to the lists. I’ll even throw in a bonus one. Cool?

While most folks probably scoured Kaladesh Remastered to look at the presence of the outliers – Felidar Guardian, Smuggler’s Copter, Aetherworks Marvel, etc. – I was a lot more interested in my pet cards.  Some are gone, such as Inspiring Statuary, while many others, like Metalwork Colossus, are still intact.

Say what you want about the power level of certain cards in Kaladesh block, but I thought the sets were a joy in terms of awe-inspiring build-arounds. 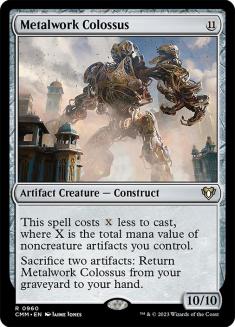 Metalwork Colossus is probably the worst deck I convinced my Pro Tour teammates to play during our run in the “good ol’ days,” but it’s always something that I’ve toyed with in the “off season,” because honestly nothing is really as fun as casting free gigantic creatures.

So, the elephant in the room here is that we don’t have Sanctum of Ugin in Historic, undoubtedly one of the strongest interactions with Metalwork Colossus. On the other hand, we have a far more coherent and powerful supporting cast — this Forsaken Monument shell has gotten a little bit of press already, and instead of being a full-blown Ramp deck with a huge swath of polarized draws, we’re trying to meet somewhere in the middle.

I was inspired to write this article and jump down the rabbit hole brewing by Sarkhan’s Unsealing + Metalwork Colossus. 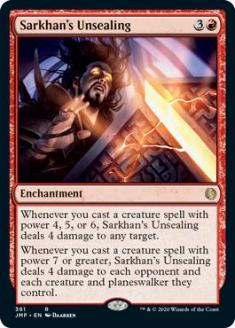 This interaction with Colossus is no joke and instantly puts you way ahead on the battlefield.  The fact that we can “freeroll” a bunch of giant creatures with Stonecoil Serpent and Jegantha ensures that we’ll have a reasonable number of ways to trigger the card, and you have a high potential of flipping games around extremely quickly on top of naturally having some ramp, interaction, and disruption.

I’ll probably be misquoting Brad Nelson here, but he said something like “Skysovereign, Consul Flagship is the type of card that, as a format gets fleshed out, becomes more and more powerful.”

What he was referencing is how, as formats become more midrangey (read: good interaction like Thoughtseize, Fatal Push, and well, frankly, bans enter the format and chip away at the outliers), cards like Skysovereign – his recent example is Shark Typhoon – start to shine as they’re proactive cards that can catch you up and snowball your position while generating some card advantage.

That was a lot of floundering to tell you this: Skysovereign, Consul Flagship is really strong. Don’t sleep on it.

This deck is simple and clean, but it’s yet another example of “seriously, don’t sleep on this stuff.”

Like I was alluding to, as really strong interaction enters the format, the poles of formats slowly start getting chopped off.  Rakdos has so many good tools now between Thoughtseize, Fatal Push, and the injection of high-powered red cards that are in Kaladesh Remastered.

This is certainly inspired by Javier Dominguez’s Worlds deck, but at its core it’s just a proactive strategy that has tons of strong and incidental interaction, as well as resiliency, card advantage, and Chandra, Torch of Defiance. 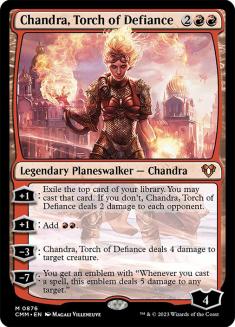 Chandra is one of the strongest planeswalkers of all time, and it is supported by ten proactive creatures that can all interact — Goblin Chainwhirler, Bonecrusher Giant, and Glorybringer.

This deck has some potential holes as it’s currently built, but this deck is extremely malleable and at the end of the day it’s hard to have gaping weaknesses when you can attack, cast planeswalkers, Thoughtseize, and Abrade.

This is my take on Temur Marvel for Historic’s “Anticipated Best Deck.”  I’ve been a little confused to see most folks gravitating towards earlier incarnations of Temur Marvel — choosing cards like Servant of the Conduit and Whirler Virtuoso.  It makes a lot more sense to me to start at the tail end of that Standard format, with Brad Nelson’s (guess you’re just incidentally getting a lot of name-drops today, Brad!) Grand Prix-winning list that was more reminiscent of combo-control.

Patrick Chapin and others are definitely correct to identify Zendikar Rising’s DFCs as a huge draw to this archetype, but I don’t think we really need to go too hard on them.  Increasing your percentage chance to hit an Ulamog is worthwhile, but by default, if you can spin Marvel, it’s pretty likely that even if you “miss” you can keep going.

Instead I really want to build this deck like Wilderness Reclamation.  I have my baseline combo pieces, but every other part of the deck is just building me towards those combo pieces or interacting with my opponent — hence the Growth Spiral and Censor package.  Naturally, since we’re playing blue and green, we also want to be touching some copies of Uro, and those aforementioned cards go great there.

I’m neither convinced that this version is particularly well-built nor that Marvel will be one of the strongest decks in the format.  It’s also weak to Grafdigger’s Cage to the point where going all the way back to Dissenter’s Deliverance or including some copies of Abrade makes a lot of sense to me.  The mana is also strong enough that you can probably play a copy of Blast Zone or two.  Another case of “don’t sleep on it,” but I don’t think Aetherworks Marvel is poised to be a dominant force in Historic, just like it failed to be in Pioneer.

I think it’s finally time for Steel Overseer’s innocuous inclusion in Core Set 2020 to get paid off.  I didn’t really give Bomat Courier its due when discussing the Rakdos Midrange deck earlier.  Bomat Courier is legitimately one of the strongest one-mana creatures of all time.  The potential impact it can have on a game starting from Turn 1 has only been rivaled by creatures like Mother of Runes.  It’s a must-answer threat, and when it can compound synergy on top of it all, it’s worthy of building a deck around. 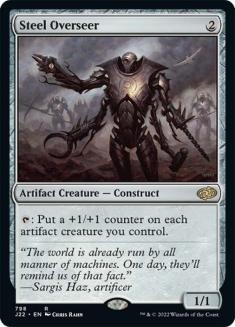 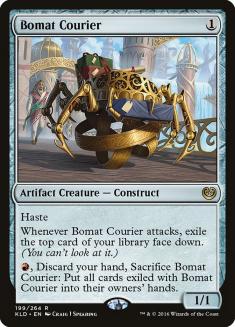 With it, we finally have a critical mass of cheap artifact creatures that are worth playing, and Metallic Rebuke is another critical key piece of interaction a deck like this needs to get over the finish line.

It’s possible that I’m actually playing too many payoffs, and while it’s hard for me to believe that All That Glitters isn’t worth playing here, it does appear to be the weakest if that proves to be the case.

I suspect that there might be too much strong interaction for a deck like this to really get off the ground as one of the fixtures of the format, but Tempered Steel is an extremely strong card and we aren’t forced to play any more chaff.

I didn’t want to save this for last because it’s certainly not the most fun deck that I’m showcasing today, but it might be the best. My original intention was to build a deck around Aetherflux Reservoir, but as far as I could tell, all the roads kept leading down this path.

Paradoxical Outcome basically does everything for this deck — resetting Underworld Breach and drawing a ton of cards between all of your zero-mana artifacts.  There’s no way that I’ve built this correctly, but it’s currently streamlined.  You can still kill people with your classic Excavator loops, but my guess is, instead of having to play nonsense like Saheeli or Lurrus that puts pressure on your manabase and increases the overall converted mana cost of your deck, you can instead just do everything with Outcome and just assemble whatever combination you need through raw velocity to kill your opponent.

You’re certainly vulnerable to hate, but all a deck like this needs is iterating down to its core components and then patching its weaknesses.

Every other content creator has already covered Abzan Counters, so I wanted to take a slightly different approach.  I’ll warn that I think of this decklist more as a proof of concept than something I’d really recommend.  Giving up Mayhem Devil and Collected Company is a huge power gap between this and traditional Jund Sacrifice, but Renegade Rallier and Hidden Stockpile are such relevant components to this macro-archetype that I think they deserve mention.

Fatal Push is also notably so strong in this deck that I think it pushes out the need to play Claim the Firstborn, especially since it can kill the deck’s number one weakness — Yasharn, Implacable Earth.

I briefly wrote about Dimir God-Pharaoh’s Gift after the release of Amonkhet Remastered. While I thought it was a strong deck, there weren’t quite enough pieces to justify it over Mono-Black ultimately.

I’ve changed my mind now, almost solely on the back of Minister of Inquiries, essentially copies of Stitcher’s Supplier 5-8. Dimir God-Pharaoh’s Gift is now extremely fast at milling itself to turn on its namesake.  That paired with Trophy Mage to ensure further consistency in assembling your engine, with Champion of Wits as another mill payoff, makes this deck a well-oiled machine.

I’ve saved my favorite for last.  This deck just looks like so much fun, and I can’t wait to play it.

The improvise package was always something that I was interested in during its tenure in Standard, but the supporting cast lacked in power.  Herald of Anguish can quickly lock up games by itself, while Maverick Thopterist comes in at a high rate and can quickly shut down offenses and bridge you into the end-game.

I’ve always been on the hunt for a home for Sai, Master Thopterist, but he’s frequently been a sore thumb in combo decks — still capable of taking over games, but a somewhat vulnerable creature that doesn’t always coherently pair with the rest of your draw.

I think it’s all finally coalesced into a coherent package.  We’ve got top-notch interaction with Thoughtseize, Fatal Push, and Metallic Rebuke.  Your cheap bridging artifacts are high-impact — Mazemind Tome is both a draw engine and a “mana rock,” while Grafdigger’s Cage is a legitimate lock piece that can pull triple duty here as a mana producer or fed to your various artifact inputs for cards or as a removal spell.

Grixis Improvise can kind of “do it all” while quickly shutting the door on games.  It’s also malleable to metagames.  Want to load up on Cages in your maindeck?  You can.  Need focused exiling, Sorcerous Spyglass, Ratchet Bomb, anything else?  You can justify playing all of it since it all contributes to the primary gameplan.

I think there might be a temptation to go a little bigger with either iteration of Karn, but while building the deck I constantly kept coming back to the fact that this is a really effective disruptive deck that just incidentally gets to play a “seven-drop” as its top-end.  I’m fairly convinced that, at least for now, that’s the right way to treat this strategy.