Kaladesh and Aether Revolt Limited are formats close to my heart. The first time I ever took a plane to travel to a Magic event was right before Kaladesh. I traveled to Montreal with my close friend Ben for a Grand Prix playing Eldritch Moon Limited. After this, I started writing about Limited for a website called Spellsnare run by another NYU student. While that site, and hence those articles, don’t exist anymore, my initial pieces on Kaladesh played a large part in getting me here on StarCityGames.com.

Needless to say, I played a lot of this format. At the time, I was a nobody, and felt I needed to prove myself. Seeing my name next to some of the best in the game was daunting, and I was worried that my voice wouldn’t be taken seriously. While I had been infinite on Magic Online for a while, I wanted to draft more than anybody in order to fuel my content. I believe that triple Kaladesh would have been one of my favorite formats of all time if Renegade Freighter was not a common. A colorless common shouldn’t be better than many of the rares. Luckily, Kaladesh Remastered doesn’t have Renegade Freighter! Instead, there’s a much simpler and less powerful three-drop common Cehicle: Mobile Garrison. 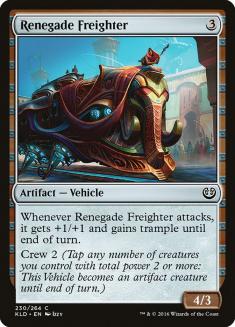 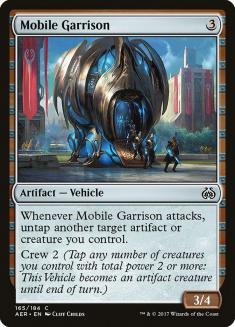 Today, I’ll go through a few starting picks of a Kaladesh Remastered draft. I’m still working through the whole set, and you can expect an outline of the strategies and best cards later this week. Until then, let’s just jump into the draft!

Irontread Crusher was one of the most underrated commons in Aether Revolt. A 6/6 that dodged sorcery-speed removal should catch your eye, but crew 3 is quite steep. It’s not actually in consideration in this pack, but I wanted to bring it up because most people thought this card was quite poor in Aether Revolt and it played much better than that.

Leave in the Dust is a good card, but just a little expensive. Generally, spending more than three mana on a bounce spell isn’t a great idea. Even though Blink of an Eye and Into the Roil were top-tier commons in their respective formats, the lack of modality to cast for two mana really makes Leave in the Dust play worse than you may expect given the kicker bounce spell comparisons.

Both Attune with Aether and Aether Chaser are reasonable picks from this pack and I can’t fault anybody for taking either. Green was the best color in original Kaladesh, and I expect it to be the same in Kaladesh Remastered. Green is the best energy deck, and an extra resource that doesn’t require mana investment provides a significant advantage to the color.

Attune with Aether will be one of, if not the, best green commons. Any card that boils down to “do something I’m not very unhappy with, and make some energy” will be a very good card. Lay of the Land isn’t a great card, but it’s not terrible either. If it’s hard to see the world where Attune with Aether is great, just think of it as “search for a land, gain some form of card advantage.” That energy counts, and it converts to a real card economy in many green decks.

However, I’m going to take Aether Chaser here. While green uses energy better than red, Aether Chaser is both a producer and consumer of energy. This means the card stands alone and hence is good in every single red deck. In my opinion, Aether Chaser was the best common overall in Aether Revolt. The fact that this produces artifact tokens is nothing to scoff at thanks to the extra improvise and artifact synergies. The two-power first strike body is also just above rate for a two-drop to boot! I won’t fault anybody for taking Attune with Aether here, but I’m taking Aether Chaser.

Invigorated Rampage can be a sweet way to end the game for a hyper-aggressive deck, but it’s not very good overall. If you’re mostly a Constructed player, this and Veteran Motorist will jump out at you. But I’d argue they’re the worst cards to take out of the options. Rampage is just not worth a full card enough of the time and the one-toughness body on Motorist is likely problematic and hence not worth the gold speculation. Don’t get me wrong, Motorist is fantastic in any Boros deck, but speculating on Boros is a bit too narrow for a payoff this small. I think many players may initially overrated Motorist because I expect it to be worse in this format than it was in triple Kaladesh. This is because, with improvise, there is an increased density of cards that produce 1/1 Servos and Thopters than there were in triple Kaladesh, like Aether Chaser.

Revoke Privileges is a solid Pacifism variant, and preventing the crewing of Vehicles helps mitigate some of the downsides of removal that doesn’t truly take the creature off the battlefield. A boring card, but an option nonetheless.

Wind-Kin Raiders can range from fantastic to mediocre. At six mana, the card is embarrassing. At five mana, it’s on rate for a common. At four mana, it’s a solid uncommon. Anything less than that is an unbelievably good card. Unfortunately, it would have to take a deck that can reliably cast this card on Turn 4 in order for me to be excited about it. While Aether Chaser may facilitate draws where that’s plausible, I don’t want to speculate on that kind of deck this early when there is such a powerful rare in the pack.

Midnight Oil was the most underrated rare in Kaladesh. There’s so much text on an enchantment that draws cards and historically cards like this are poor. Because of this, many dismissed Midnight Oil. Think of this card like Experimental Frenzy. It’s a card advantage engine that’s meant to be cast once you have used most of the cards in your hand. It’s very good and the clear pick out of this pack.

If you’re completely unfamiliar with this format, you would probably just take Furious Reprisal because it looks like an unbelievably powerful two-for-one that’s the same color as my first pick. As it turns out, this format has fewer valuable small-toughness threats than most. In triple Kaladesh, most of the small creatures are from cards that make tokens. This meant that Furious Reprisal played out much more like a four-mana sorcery-speed conditional removal spell. For context, in almost every red deck, I would rather have a card like Open Fire, which isn’t in the format but gives you some context for Furious Reprisal.

Arborback Stomper is the most powerful card in this pack, but it can’t be played alongside both of the cards in my pool. I think Arborback Stomper is around the same power level as Midnight Oil and I wouldn’t fault anybody for taking it here. However, I believe the correct pick is Fabrication Module.

Fabrication Module is extremely powerful. It’s a phenomenal mana sink that creates a resource that can be turned into Servos, counters, and more. On top of that, this card often moves +1/+1 counters across the battlefield and the threat of activation makes combat impossible. I do think Module is worse than Arborback Stomper, but when you adjust for the fact that it can be played with both cards in my pool and one is already a great energy card, I believe that gives Fabrication Module the edge.