Dominaria United Prerelease weekend is in the books, and hopefully you were able to get your hands on at least a few of the cards you wanted for Commander. This coming weekend will be the full release, and I can’t wait to get my hands on a bunch of new cards for my Commander decks.

Between the main set and the new Commander cards, we’ve got a whopping 75 new legendaries to build decks around, which is just mind-boggling!  What’s nice about legendary designs these days, though, is that they tend to be rather niche in what they do, so what I’ve found in scanning through the list is that some of them speak to me, and some of them don’t.  No matter your play style or preferences, there’s bound to be at least a couple of new legends that you’ll want to build a deck around.

For me, one of the first to really jump out was Meria, Scholar of Antiquity! 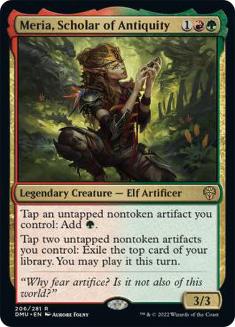 Now hang on a second, isn’t this a Gruul version of Urza, Lord High Artificer?!

I mean, you pretty much had me at “a Gruul version of Urza, Lord High Artificer,” except chock-full of fun and expensive red and green spells feeding off the extra mana instead of pesky and annoying blue spells. There have been many artifact-heavy decks centered around blue. Making a Gruul artifact deck feels like new territory worth exploring.

The whole “play from exile” theme that started in red, which then bled over to black last year with Prosper, Tome-Bound, has now dipped over into green. I have to admit, for me personally, I’m not a huge fan of the “use it or lose it” type of virtual card draw, since if I can’t or don’t want to use it, it bugs me that it’s gone forever.  But once you’ve cast a bunch of big spells with your extra mana and your hand is lacking in action, the second ability can be just what you need to fuel up the gas.

Let’s see what we can dig up for our Meria deck!

First off, with Meria on the battlefield, zero-mana artifacts are effectively Mox Emeralds. 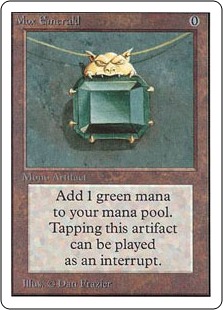 Now, I hear that Mox Emerald is a pretty powerful card, so if you really want to leverage Meria’s power, you’ll want to put in a fair number of zero-mana artifacts that do a good impression of Mox Emerald. It’s fun that Meria is the one who is tapping the artifacts for mana, so you don’t have to worry that Ornithopter or Phyrexian Walker has summoning sickness and can’t be tapped for mana. And how fun is it that Darksteel Relic gets to be an indestructible Mox Emerald with Meria!

I’m a pretty big fan of using Equipment card for cheap artifacts that can be tapped for mana, since tapping them doesn’t decrease their utility, and often tapping an Equipment for mana can pay all or some of its equip cost. This sort of double-dipping on each artifact’s utility really helps ensure that you have plenty of use for your excess mana outside of casting large spells.

While a one-mana Mox isn’t as powerful as a zero-mana Mox, it’s still mana-neutral by immediately paying for itself and thus quite good. This can lead to casting a chain of cheap artifacts that will help you have a big follow-up turn.

Again, I really like Equipment cards here, since they can each pay one of its equip costs, and there are some excellent one-mana Equipment cards that most decks are going to want to run anyway, like Skullclamp, Shadowspear, and Basilisk Collar. Explorer’s Scope is sweet tech here with a one-mana cost and one mana to equip, and when equipped creature attacks, you get to look at the top card of your library. Assuming it’s not a land and is being put onto the battlefield, this is handy intel to have for Meria’s second ability.

If you play in high-powered pods, it’s worth noting that some Stax artifacts play quite nicely with Meria.  Winter Orb, Static Orb and Storage Matrix are symmetrical painful artifacts, but you can break that symmetry by tapping them, which Meria can do!

While I personally wouldn’t build my Meria deck that way, there are some other artifacts Meria can tap in less powerful but certainly fun ways. Genesis Chamber turns off when tapped, so you can ensure you’re the only one benefitting from the extra Myr tokens (though keep in mind that Meria can’t tap artifact tokens for mana). Similarly, Blinkmoth Urn can tap to ensure your opponents won’t benefit from the extra mana, though it certainly is dangerous these days with so many Treasure cards out there.

Scaretiller is another cool card to use in this way, particularly using it to bring back lands that you sacrifice for utility reasons; some of my faves are Mirrorpool, Blighted Woodland, Tyrite Sanctum, Inventors’ Fair, and Field of Ruin.

Mirage Mirror is a neat card that I’d consider tossing in with Meria since it can tap for mana or to exile cards from your library, and then when there’s something worth copying, it can do that too!

Liquimetal Torque has pushed poor Liquimetal Coating to the backbench of Commander playables, since it can naturally tap for mana when you don’t use it to make something into an artifact. But the Gruul colors have some fantastic ways to destroy artifacts, and if you’re playing a fair number of them in the deck, I’d strongly consider playing both of them, especially since the OG Liquimetal Coating can target a problem land if you need to destroy it, something like Cabal Coffers or Maze of Ith.

To further leverage the mana advantage of Meria, we’ll want to include ways to untap our artifacts, and Unwinding Clock is a slam-dunk here (Meria can even tap it for green mana). Curse of Bounty and Seedborn Muse are two more ways to do it.

We’ll want to tap into artifact synergies to broaden the benefits of running so many of them outside Meria shenanigans. I like that Foundry Inspector turns all our one-mana artifacts into true Moxen! And I like that Shimmer Myr lets us play the artifact game at instant speed, helping to avoid some sorcery-speed artifact removal. And I’m always happy to have good reasons to run old favorites like Trading Post and Darksteel Juggernaut!

Not having access to black means we’re a little limited in the “exile matters” cards, but we can definitely use Faldorn, Dread Wolf Herald to make some Wolf tokens and the weird green card Tlincalli Hunter—its ability can help cast a large creature you exile with Meria’s ability and save you a bundle of mana if you need it.

I’m particularly excited with Nalfeshnee’s ability to copy permanents we cast from exile, giving us extra artifacts or a big creature for the turn. I might even consider Sundial of the Infinite so that I can keep the copies around!

Access to green gives us a lot of nifty ways to peek at the top of our library, which takes the gamble out of Meria’s second ability. From old-school cards like Sylvan Library, Scroll Rack, and Mirri’s Guile to new classics like Augur of Autumn and Radha, Heart of Keld, we’ll want some number of these in the deck. Mystic Forge is another consideration, given how many artifacts we’ll be running.

Protecting our battlefield from getting wrecked by a sweeper like an overloaded Vandalblast would be nice, but there’s not much we can do on that front other than Heroic Intervention. Luckily for us, the nature of our gameplan means that we’ll often be able to keep two mana open for that. Deflecting Swat is always a good way to protect from targeted removal.

So much of our gameplan revolves around having Meria on the battlefield, so we’ll want to play plenty of ways to protect her from untimely demises. Equipment like Lightning Greaves, Swiftfoot Boots, and Mirror Shield are ideal since they can tap for Meria’s abilities. One-shot instants like Tamiyo’s Safekeeping are good too, since we’re quite likely to have an extra green mana available. Later in the game, we’re likely to have a bunch of extra mana available, so cards like Slippery Bogbonder and Guardian Augmenter become a consideration.

And here’s a weird one—Wirewood Symbiote only costs a green mana, but you can return Meria to your hand in response to removal, since Meria is an Elf.

If we can’t protect our artifacts from sweeper spells very well, we do have some options for bringing them back from the graveyard. Top of the list is Scrap Mastery, the red version of Living Death for artifacts. Creeping Renaissance is another option, capable of bringing all your artifacts back to your hand for redeployment. And since our deck should be able to generate a ton of mana, Praetor’s Counsel is a viable option. I also really like grindy ways to get artifacts back more slowly with things like Salvaging Station and Scrap Trawler.

What do you think of Meria, Scholar of Antiquity?  Which cards will you be putting in your deck that I may have overlooked?  What other legends from Dominaria United are you excited about?