Drafting Day 2 of the Arena Open was brutal. Of the six rares I saw, two were Errant, Street Artist, and two were Widespread Thieving. My power level was worse than a four-year-old iPhone trying to run Fortnite. I needed to put together an incredibly synergistic deck where everyone was trying to play some combination of the same three colors. I wound up an unceremonious 1-2 after fighting for white with, likely, everyone else. 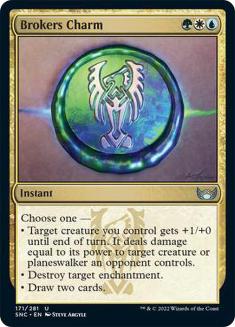 Drafting Bant, aka Brokers, in Streets of New Capenna (SNC) has become the moment your parents joined Facebook and you knew it had become too popular to remain “cool.” Also, I shudder to think that Facebook was once “cool,” but I can’t erase history. As of this writing, 17Lands users have played either Azorius or Selesnya for 51.97% of all games logged with two-color decks.

That’s right: the other eight possible combinations account for less than half of the games. It’s even worse when considering those colors with the other splashed, where it jumps to 53.88% of games played. When it comes to three-color decks, Bant makes up 35.53% of games played. At some point, the best deck becomes the worst deck because of how many people want to draft it.

As I mentioned last week, this leaves Rakdos as an obvious place to find value. It’s the TikTok, where new, “cool” things are possible. I want to take a slightly deeper dive into what makes a successful deck work in this format and what cards we may have been wrong on initially to help you if you find yourself stuck.

Cheap Spells Are Back

I mean, did they ever truly leave? Everyone had Strangle as a solid card, but the faster this deck runs, the more successful I’ve found it. Trophies keep popping up with up to three copies of Cutthroat Contender, a one-drop I had mostly written off early on. The faux-2/1 body for one mana means that opponents can’t afford to stumble with too many tapped lands, while Contender can confidently trade for various two- or three-drops, making it efficient. Here’s a fairly mundane list that pushes them aggressively.

Goldhound also has been making the rounds as the perfect complement to your best two-drop, Body Dropper. Using it for mana and a pump effect all in one makes it sting a little less when you find the Dog a little outclassed on Turn 4 or so. Unlucky Witness also has some utility later when you’d prefer to cash it in, whether it’s helping find a blitzing threat or making sure you avoid more lands. 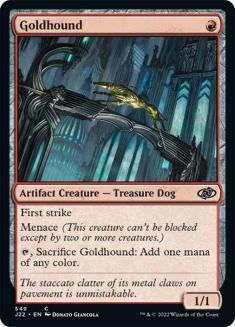 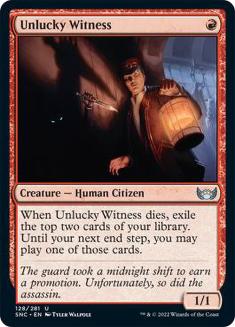 In terms of cheap spells, Sticky Fingers remains powerful in a format where menace makes your combat tricks even better. Fake Your Own Death remains the gold standard, but I’m warming up to Daring Escape or Antagonize, too, if I find myself looking for a final playable. Since so much of Rakdos’s interaction comes at sorcery speed, we need ways to keep our opponents on their toes. Grisly Sigil remains a beating against Bant, but don’t underestimate Whack and Torch Breath, which I’m finding myself casting for one mana more frequently than ever.

Your Two-Drops Are Deep 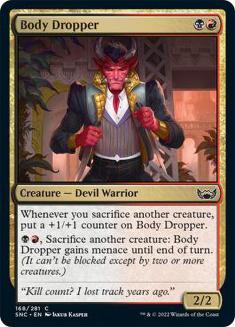 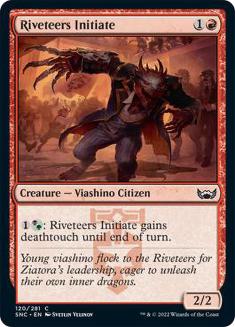 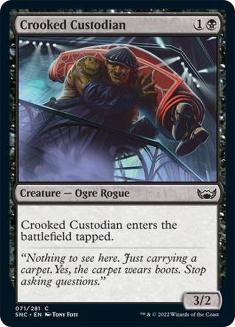 There are so many keywords here, I get dizzy sometimes and Jetmir shows me to his fainting couch. Menace for Body Dropper and Mayhem Patrol. Riveteers Initiate with optional deathtouch (that pairs great with Sticky Fingers, too). Corrupt Court Official forcing the discard. Riveteers Requisitioner with optional blitz. Crooked Custodian as “thicc.” You’re not afraid of getting outclassed early by your Brokers counterparts, that’s for sure.

Witty Roastmaster Is No Joke 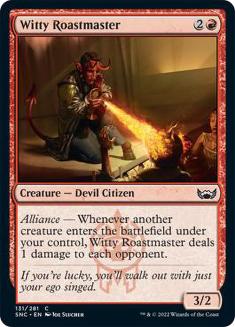 The fun thing about Rakdos is that it generates a lot of bodies when you’re not looking, like low-key Tribbles. Casting Witty Roastmaster and then blitzing out Girder Goons or Pugnacious Pugilist represents a lot of raw damage your opponent needs to answer. Earlier in the format, I found it hard to give these decks reach because I eventually flooded out by blitzing myself into a glut of lands I didn’t have much to do with. Roasty gives your opponent the slow burn you’re looking for and is relatively impervious to their passive removal like Hold for Ransom and Sleep with the Fishes. You love playing multiples.

Blitz Is Brutal for Blockers

I still think people are having trouble blitzing correctly, so I would encourage you to think of it as a purely aggressive mechanic, like exert. Your opponent rarely wants to trade for a card that’s going away regardless, so blitz cards are almost little Lava Axes that give you effects that tend to skew aggressive. Night Clubber is your mythic uncommon in this deck, and there are few cards I’m willing to take over it, including hard removal like Murder. Everything in this set feels like it has one toughness, but being able to blitz out The Club and then fake its death on Turn 5 is hell for opponents. 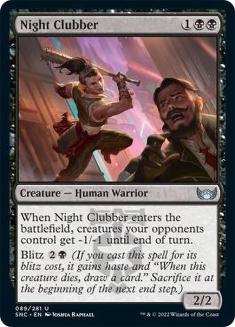 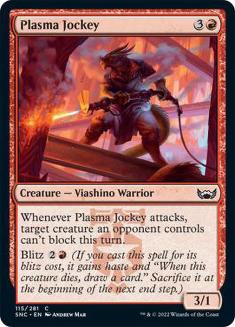 Plasma Jockey continues to be underrated, going a couple of picks too late by the data. So often, you see a single, solid creature come down on your opponent’s side of the battlefield and things grind to a halt. In a deck with a plethora of menace, you love being able to temporarily stun a blocker. Even better if you have a Sizzling Soloist on the battlefield already, like we see in this 7-1 trophy.

You certainly have the option of exploring Riveteers or Maestros, but neither adds much to the speed of the deck. Grixis is one of the most controlling decks in the format, which you see in your three-color creatures like Maestros Diabolist; Cormela, Glamour Thief; or Evelyn, the Covetous: all butt, no brutality. 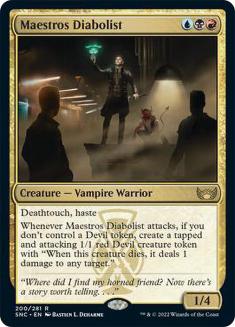 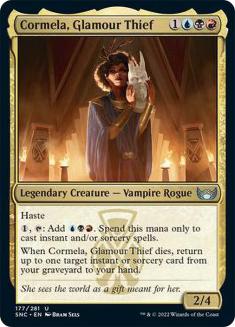 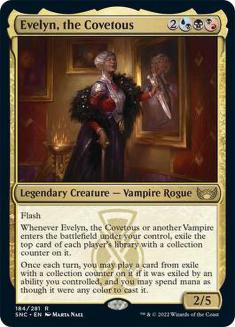 Green wants you to care too much about Treasure, so it makes for a weird splash. Not to mention that adding tapped duals and sacrifice lands slows down your ability to curve out consistently. Ziatora, the Incinerator and Lord Xander, the Collector are fine finishers, but I think it’s a mistake to force the respective Charms in here.

I still really like Brokers, but that’s probably Stockholm syndrome from two weeks ago, when it was still easy to draft. I love you, Bant! More importantly, forcing myself to get away from my habits has made me a better SNC drafter, even if I didn’t get a chance to show it this weekend. If you’re planning on jumping into a seat any time soon, you should know the basics of Rakdos. That is, unless you think your parents are actually going to delete their Facebook accounts.