Many people are fans of playing Standard. But many, many people are not fans of playing Standard. This article is for the latter group. Special thanks to Drew Magary. I’m including this at the top of the article because the denizens of the comment section refuse to acknowledge that I’ve already acknowledged him and this format. Your comment section sucks.

Deep down, somewhere in the cockles of my heart, I thrive off of this. Every single time I get to write a Why Your Deck or Why Your Format Sucks article, I get the warm and fuzzies. I don’t know. Maybe it has something to do with how much I enjoy having Reddit threads written about me. Call me a glutton for punishment. It just feels good. Any time I’m in a bit of a creative lull, my first instinct is to get to my roots: spewing absolute hatred for things. It probably has something to do with me being a Millennial: all jaded and full of constant misery.

So let’s do the damned thing.

Your Format: Battle for Zendikar, Shadows over Innistrad, Kaladesh

The last time I talked about Standard, I got an email saying they were going to punch me in the face at the next Standard event. Since I haven’t been walloped after receiving that, I figured I’d poke the bear again.

Right now you’re in the midst of Smuggler’s Copter Summer. Or fall. I think summer just ended. Season of the Smuggler’s Copter. We’ll just go with whichever one the internet finds catchier. At this point your decklists will almost always start with the following:

Forget all of those awesome Eldrazi cards that you thought you’d get to play with from BfZ, and remove the convoluted notions you may have believed about Zombies or whatever from Innistrad. The Kaladesh “Screw You” Tour is in full swing, and right now we’re practically strapped into the Magic: The Gathering equivalent of the Carousel of Progress. You probably think that there’s a great big beautiful tomorrow shining at the end of this format.

We now live in a world dictated by a two-mana artifact. If I say “Watch this card for ban potential,” people complain that I’m overreacting. If I say “This card is completely Gucci and y’all need to stop freaking out,” the trolls come out and let me know that it has such a massive Standard presence that it makes the format not fun. What I’ve learned? Some folks sure love to complain.

But that’s not the worst of it. Wait until you see how few decks there are out there.

I’d include more on the list above, but my editor and the kind people of SCG would be here for a while, so I’m taking mercy on them. Contrary to how many cards appear above, it’s all just one big charade. Sure, all of them might look interesting and fun with there being planeswalkers, artifacts, creatures, multicolored cards, and whatnot, don’t let that fool you. This format is awful. Everyone is saying so.

The first complaint that I have is that, while these cards are admittedly well-designed and intricate to understand, they aren’t as cool as cards used to be. Standard used to take so much more skill to play than it does now. Have you ever experienced what it was like to play Machine Head against Merfolk? They had Plague Spitter back then. We don’t. I used to be able to Waterfront Bouncer people…

Hold on. I need to message Aaron Sorrells about the potential of a Legacy deck containing Prized Amalgam and Waterfront Bouncer…because value.

You’d think that an immense amount of diversity would breed a healthy Standard format, but it’s actually the least healthy it’s been in years. My last count was somewhere around fifteen decks that are all viable, but that’s actually very unhealthy. You can’t metagame for anything anymore. What am I supposed to do? Throw darts at a wall with pictures of cards I’m supposed to worry about and just metagame for whatever sticks? That plan is terrible. I suck at darts. What if I hit one of my cats on accident? There are just too many variables at play.

The glut of W/U Flash cards make you feel like you’re playing a Modern deck in Standard, since it has a ton of cheap interaction, card quality, pressure, and filtering. The aggressive creatures in R/B Zombies are strong and resilient. Aetherworks Marvel is one of the most interesting combo cards we’ve seen printed in years. Cathartic Reunion ties the entire room together for multiple decks. Torrential Gearhulk is a control player’s dream.

Wait. I’m supposed to be complaining about things and not talking about how good they are. Give me a moment to get back into my flow.

Okay, we get it. You’re the second-best planeswalker of all time. You’re in tons of decks. We now have six more months of playing with you. Nothing about this seems good, except that there are plenty of answers in most colors to Gideon. That part doesn’t suck, I guess.

Sure, it might be one of the most interesting creatures that has seen print in a while. It’s aggressively costed, punishes control decks, turns on Prized Amalgam, and plays very well with the cards you discard to Haunted Dead. But it has a stupid face. I don’t even know what the hell this thing is supposed to be.

Oh, I see how it is. I write that it’s the best one-drop in Magic and everyone calls me stupid. Michael Majors does it and he’s a hero. Thraben Inspector has made me bitter.

Right, so I guess it’s one of the most “diverse” Standard formats we’ve ever had…whatever that means. Tell me if this sounds fun to you:

I think one of the most unfortunate aspects of having this many decks is being rewarded for tight play. I miss just playing a Pack Rat on turn 2 and then winning because I Duressed my opponent’s way of killing it as my first play of the game. Those were the good old days.

I was well-developed. My art, I mean.

Without a doubt the best decks in this format require quite a bit of skill to play, and that includes even the most aggressive decks. The sequencing involved in B/R Zombies can be dizzying, and single play errors will often result in ripples that can cost you the game several turns down the line once the butterfly effect kicks in. Knowing what to scry with Veteran Motorist or which creatures to grow with your Verdurous Gearhulk…all of these decisions are complex and can lead to no game feeling the same, even if you’re playing against the same deck round after round…which you probably won’t be, but hey, everyone is jumping on the W/U Flash deck, so that’s something to be pissed about, right?

You might be thinking, “Hey…this actually doesn’t sound so bad.” You’d be right. I mean, Kaladesh Standard is practically a brewer’s paradise with tons of options to play, room for innovation, and more archetypes represented than in years. There isn’t any hyperbole in that statement, either. We have at least two combo decks, several control decks, a great grouping of aggressive decks, midrange is represented, and for once there’s something for everyone.

This means you have the terrible distinction of testing tons of decks, literally numerous options to fulfill whatever kind of playstyle you prefer, and then you’ll have to play it against the most wildly diverse field in roughly a decade. I can’t imagine this is what WoTC had in mind.

“But Maaaaaark, almost all of those decks play Smuggler’s Copter!”

Yes. Yes, they do. And that is why, no matter how incredible this format is and no matter how much I love hate it, that you are allowed to complain about it. I just read someone on my Facebook saying that this format is stale because every deck plays Copter, and they completely ignored the fact that, while they all play it, it is utilized in a dozen different ways in order to further multiple gameplans. That’s the kind of ignorance I can get behind. Willful and perfect.

A new deck popping up every week is getting pretty tiresome. Do you know how long that list up there took to write and look up? Solid three minutes. Usually I can prattle off the metagame from the top of the old noggin, but this time it actually took work. That’s just terrible.

Aside from Aether Revolt being down the pipe, we’ve just learned that this Standard is going to be quite a bit longer, which means that multiple sets are going to supplement blocks with different themes and open up deck design even further. If you thought it was complicated now, imagine how much deeper the rabbit hole is going to go. At this rate, we’re looking at a Standard that might have an upwards of twenty relatively skill-testing decks in it by the time BfZ rotates out. 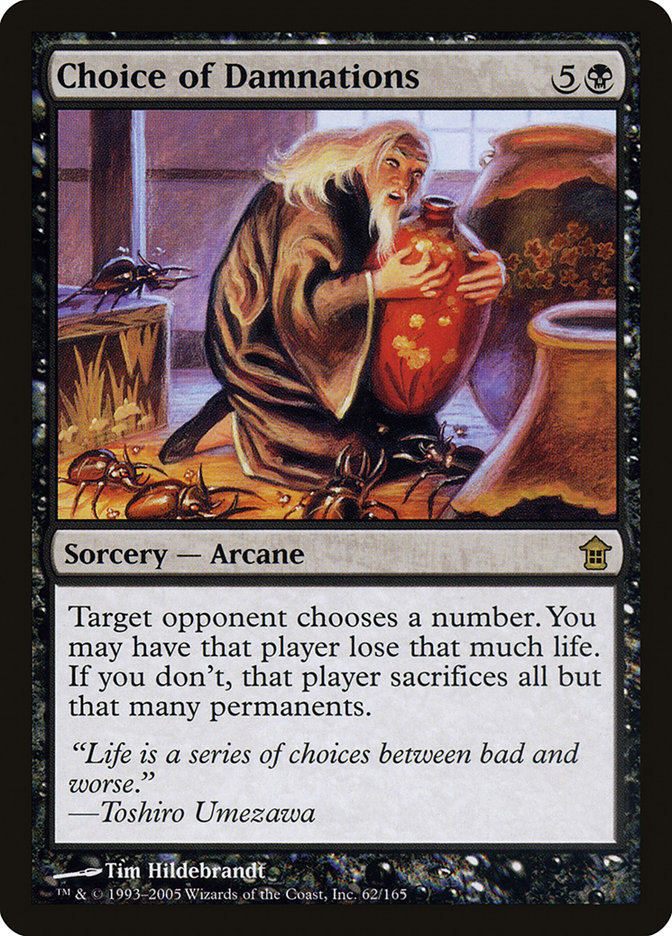 The next SCG Tour Standard stop is in Knoxville, Tennessee. If all goes well you can expect to see me there with the rest of Team Nexus, slinging spells and trying to iron out what the best place to be in Standard is. The consensus of the team is that this is one of the best Standard seasons we’ve had in quite some time, and there’s a lot to be said for that.

The reality is we are in the midst of a renaissance for the most popular format in Magic, and Kaladesh is responsible for the world we live in. At the core, Standard rewards playing a deck very well with victory more often than past iterations have allowed for, because the decks are all so similar and contrasting at the same time. They have multiple intersection points between cards but do remarkably different things, and that makes for far more interesting matches that play out in ways most players aren’t used to. And that’s what is really scary: people rebelling against something they simply don’t understand.

Truth is, this Standard format is what might not suck, which is quite a departure from how I started this thing out. I set out to clown something like I always do, but I kept coming up with reasons why it doesn’t suck.

Congratulations. We officially live in some sort of bizarre paradise where Standard is great and I am wrong. Although according to you all I’m always wrong, so take that with a grain of salt, I suppose.

Buckle in and enjoy yourselves, kiddies. If things keep going this way, I won’t have anything to complain about.