Many people are fans of playing Bant Company. But many, many people are not fans of playing Bant Company. This article is for the latter group. Special thanks to Drew Magary. I’m including this at the top of the article because the denizens of the comment section refuse to acknowledge that I’ve already given him credit for this format. Your comment section sucks.

I took a picture of the Top 8 of #SCGBALT. You guys and gals wanna see it? 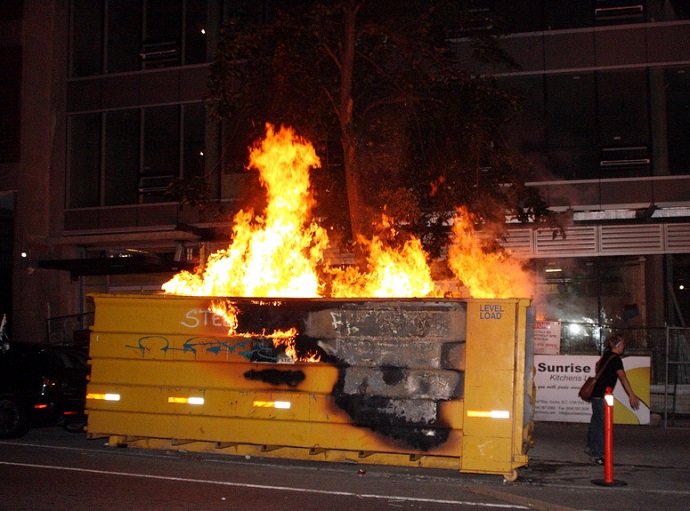 This was an actual, live look-in. Pretty impressive, eh? If you look to the far right you’ll see that person who brought B/W Angels and legitimately thought they were going to run the tables against Bant Company and hoist a trophy. I remember when I had dreams, too. Now adulthood crushes my every hope. Just like playing a non-Bant Company deck in a tournament!

Bant Collected Company is the realization that everything you’ve ever wanted to do in your life you’ve failed at. It’s your grim reminder of mortality. There is death. There is taxes. There is Bant Company. Jesus Wept.

Just remember, folks; it was you all that encouraged me to do this today. Whatever pessimistic genie that gets sprung from this bottle is on your head. Not mine.

Bless your hearts, this deck has been over 40% of the represented Day 2 metagame for the last two SCG Tour® events since the legality of Eldritch Moon. It has taken a combined seven Top 8 slots out of a possible 16, won one of the tournaments, and placed second in the other. Do you know what it took to beat it this week?

Aside from the last two weeks being a hellacious vortex of “end step, I’ll tap four and cast Collected Company,” this deck was casually brutalizing events before it got even better with the latest set.

I don’t agree with bannings very often. I may have talked about them in the pastand why they could be beneficial, but if someone called me at midnight and said “Hey Mark, Collected Company was just banned in Standard,” I wouldn’t necessarily feel pangs of sorrow.

This is like going to the ice cream store, asking what flavors they have, and being told the only ones they have are “mushroom juice,” “onion socks,” “old salami,” and “decaying cabbage.” These choices suck. I don’t want any of them.

But then you go to a different ice cream parlor and they have those same disgusting flavors. They’re everywhere. In fact, 40+% of the ice cream joints in town are actively trying to kill you with the worst confectionaries in history. All of your friends tell you “you either eat mushroom juice or you don’t get to eat ice cream.” Eventually you come to terms with it and sleeve up mushroom juice. It’s terrible.

And that…that is Standard.

Bant Company is a hilarious level of oppression that we aren’t used to seeing. G/W Tokens last season was good, but there were other decks in the format you could play and expect to do reasonably well. U/W Spirits was a little late to the party, but it beat the shinola out of Tokens. There were multiple iterations of Bant Company, W/R Humans, B/W Midrange, and…okay, so that was mostly it. Ramp was kind of good that one time?

But now we’re trapped in some sort of Buffyverse-inspired hell dimension where you either have to play Bant Company or severely warp your deck to beat it. This isn’t unfamiliar, as each format has a “best deck” that requires players to pay it extra attention. However, 40% metagames are alarming and terrifying. They don’t really belong in Magic, and those formats are historically looked at as unhealthy.

Bant Company and the five thousands mirrors you’ll be forced to play are bad for Magic.

These cards were lashed together by some form of ancient fun-hating magic. They are so much more blatantly efficient than everything else in the format that playing anything else is a lot like being a dead person in a marathon. Everyone else has moving legs. You have rigor mortis. Unless they give participation trophies, you’re not getting a medal.

I’ve talked at length about my hatred for Reflector Mage and my respect for Sylvan Advocate, but Spell Queller is the most nonsensical Magic card that they have produced in years. I mean actual years. Being a 2/3 flier makes no sense. Sure. Give it flash. No problem. At that point it would easily be outclassed by anything on the ground. A 2/2 flash creature that counters a spell costing four or less would be…still great. Give it that extra toughness and make sure it has evasion? Absolutely insane.

Wizards has sent a pretty clear message to players that they won’t be creating any Day of Judgment or Wrath of God-type sweepers because they can be stifling to aggressive decks. Pay no mind to the fact that, during the existence of Wrath and Day, aggro decks existed and were considered very good. Forget about that even though it makes sense.

Instead we’re given Languish. Languish. Seriously.

Languish is that guy who peaked in high school. It’s a poor imitation of a sweeper. Like I’ve said before, it’s a fine card…but most of the decks that play it aren’t fine. Spell Queller takes the “best” sweeper in the format and invalidates it. It forces you to cast it on their terms for free if you manage to take out the pesky creature. This is borderline sociopathy here.

The issue is that four is, and always has been, the sweet spot for putting the kibosh on being overrun. Planar Outburst and Descend upon the Sinful aren’t tearing up the competitive scene because they, frankly, aren’t fast enough. R/W Humans exists, so stuffing your deck with clunky mass removal isn’t even an option.

Spell Queller screws up all of that by being an answer in addition to added pressure. Without flying it could rarely attack profitably, which wouldn’t expedite your clock. This creature does. Players will just drop it onto the battlefield for tempo without exiling a spell because it’s good tempo and can apply pressure. Restoration Angel had a similar role. That’s some frightening company to be in.

Then we have this: 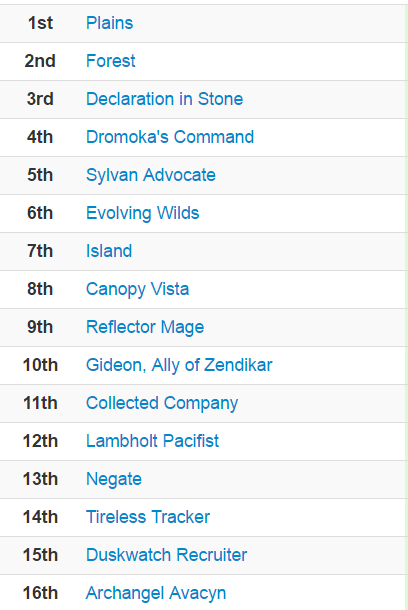 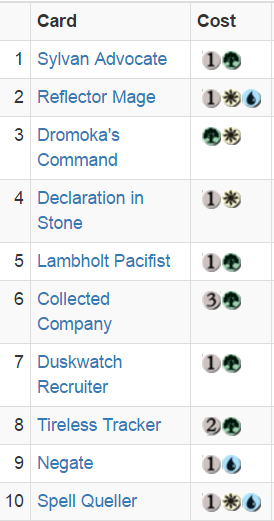 I’d like to thank my homie Gideon for holding it down in the first table and keeping it from being a clean sweep. The second one? Dear God.

Why would I even need to talk about their best cards when their whole deck is made up of the most-played and best cards in Standard? This is damning! How is this a real thing?

I just wrote a touching love letter to Spell Queller, but Selfless Spirit is also making waves. I mentioned Planar Outburst earlier, but I can’t even fathom the level of personal despair that I would sink to if I cast it and someone just looked me right in the eye, tapped four mana, and cast a Collected Company that hit a Selfless Spirit. Without breaking eye contact they’d sacrifice it and save their team. I’d actually just sign the slip there and then. I could be up a game with eleven seconds to go on the round and my opponent couldn’t win in turns…and I’d just scoop.

Thalia, Heretic Cathar is also a huge “screw you” to Magic players. In testing I had to remind my partner no less than four times that the land they were trying to play entered the battlefield tapped. They’d lose because of it. She’s disgusting tempo and allows for massive chunks of life to be taken out of the opposition.

I’ve hated Thalia for years because her first version, Thalia, Guardian of Thraben, was always messing with my spells. Now we have a Thalia that is messing with my creatures and lands. I want them to print a Thalia that says “when you draw a card, put a card from your hand on top of your library.” Hell, make her a spirit and give her flash. Why not at this point? I give up.

What Has Always Sucked:

There was a time when there was Bant Human Company, or Company decks playing Eldrazi Displacer and Matter Reshaper, or traditional Bant Company a la Jim Davis. Now they’ve all been swallowed by one version that lets you mess around with maybe five or six cards. I thought Chris Andersen came out with the wackiest Bant Company deck this weekend, and even that was by the books. 26 land and Nissa, Vastwood Seer? Be still, my heart, but I think he gave me a case of the vapors.

Truthfully, I love the mirror matches. I love playing them. I love watching them. I love watching players way better than me battle them and learning an insane amount about trading, timing, patience, and when to switch roles. They are quite skill-testing, although sometimes they come down to who drew more copies of Spell Queller or Collected Company in Game 1 and then who draws more sideboard cards in Games 2 and 3.

Bant Company also breeds a ton of creativity from the people who are trying to beat it. Gerry Thompson, Todd Anderson, and Shaun McLaren are doing really good work trying to find out the best way to take down Bant. Their lists have cards many players aren’t considering, and even something like this…

…can arrive on the scene and Top 8 a very competitive SCG Tour® stop. Abzan Superfriends probably wasn’t a deck you were expecting to do well, but because of a strong combination of removal, planeswalkers, a newly minted enchantment, and powerful creatures, we’re looking at a deck that could actually be good in a Bant Company metagame. It basically creates a mentality of “us versus them,” and while the Bant side may be thriving, I expect the Pro Tour to provide a steady stream of answers to it…or everyone there will just play it. That would be…just awful. Absolutely awful.

I’ll be talking to some of my friends battling this week to get a feel for what beats Bant Company and what they’ll be using to take down this menace. I’ll also be joining the thousands of you who will be taking part in SCG Regionals this weekend, because it’s one of my favorite tournaments. Together we can beat this deck. Together we can solve this mystery. Together we can…