Last week,
I talked about Stage Theory and how it applied to current Standard
. In this case, white has some great Stage I options and enters into Stage II relatively quickly. The main problem is that white has a difficult time
leaving Stage II, as most of its cards are barely Stage II cards to begin with! While the three-drop slot is loaded with awesome cards, there are only a
couple of options for four-, five-, and six-mana cards.

This isn’t necessarily a bad thing, since cards like Brimaz, King of Oreskos; Banisher Priest; Banishing Light; and Detention Sphere are all great cards.
The real problems start arising when you’re trying to fight other powerful four- and five-mana spells with your three-mana cards. Oftentimes you’ll find
your chance to win is capitalizing on your aggressive draws.

So, while Ephara, God of the Polis; Dictate of Heliod; and Elspeth, Sun’s Champion are fantastic cards, I don’t think they have a home in a white-based
creature deck. Your best bet looks like focusing on the best aspects white has to offer, and that’s probably one-drops.

It’s no surprise to me that the best-finishing white-based decks all had Dryad Militants.

I like the above decklist a lot, although I’ve made some cosmetic changes. Banisher Priest is also not too fantastic with the sideboard Supreme Verdicts,
yet they are basically there for the same matchups. That seems like a deckbuilding error that I would correct in the future.

However, trying to curve Soldier of the Pantheon into Elspeth, Sun’s Champion is incredibly difficult. If you’re on the play, you’ll have seen twelve cards
by Turn 6. That means you could have six lands in play while still playing one spell per turn.

The issue arises when you take into account that the deck doesn’t have many powerful things to do on Turns 4 and 5. Oftentimes, it wants to play two spells
on each of those turns. By Turn 4, you might be hellbent except for the lone Elspeth in your hand, which won’t be castable for multiple turns.

That doesn’t even take into account all the legendary cards in the deck. If you ever draw two Brimaz, Ephara, or Elspeth, your chances of winning are very
slim. All these issues make going from Solider of the Pantheon to Elspeth, Sun’s Champion a pipe dream.

I have a feeling that either Elspeth or Soldier of the Pantheon doesn’t belong in the deck, and because of the roles of the various white cards, I’m
leaning towards Elspeth. White decks need a flatter curve so they can enter into Stage II sooner and cement their advantage once they get there. At that
point, is the above deck any better than this?

Note that Boros Elite is also available if you want to go up to twenty (!) one-drops.

This deck has its own set of issues, Supreme Verdict being one of them. Ben Lundquist played Boros Charm to solve that issue in his version of the deck,
but splashing is certainly not free in a deck where any mana you lose by playing an enters-the-battlefield-tapped land is going to be one less creature you
deploy.

Utilizing the same Soldier-Elspeth theory, I started taking a look at B/G Devotion. They often had the same issue where the curve wasn’t low enough in
general due to an abundance of three-drops, but also because the curve felt a little high. Asking for that perfect draw that topped out at Gray Merchant of
Asphodel was too much to ask for at times. Draw a second Gray Merchant early? Well, better luck next game.

Thankfully, my work was basically done for me already.

Lower curve, better mana (for the most part), and maindeck lifegain? I’m sold.

I played a similar version in a Daily Event and went 4-0. The differences between Zach’s deck and stock (aka Tenjum) B/G Devotion felt positive, but we can
always do better.

Tuesday night I posted this:

A riddle: What is the best way to gain six (ish) life against R/W Burn in Standard? The answer
will be in my article tomorrow.

Do you know the answer? 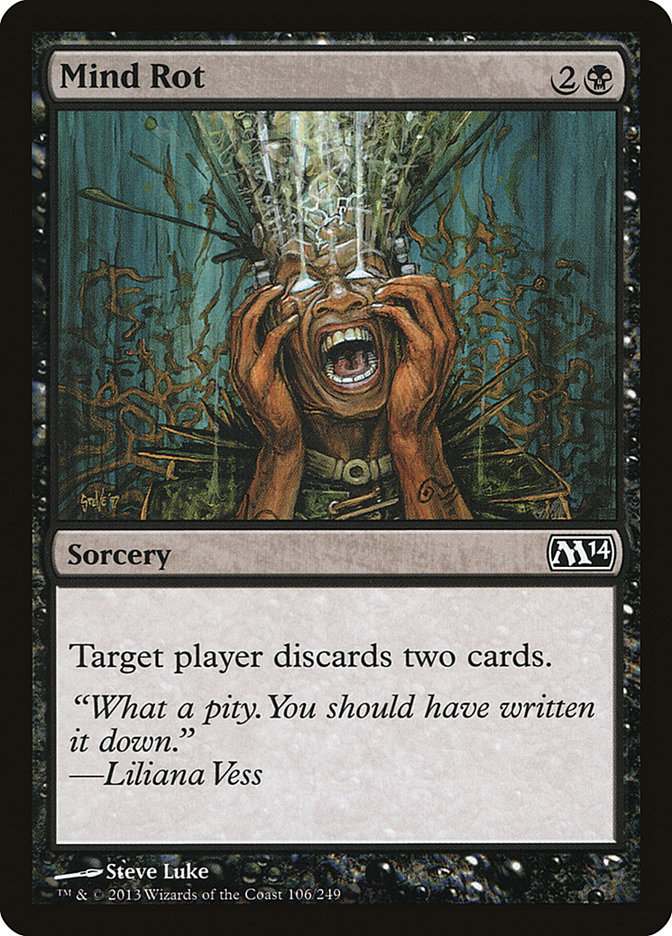 Yes, R/W Burn is a big issue, and no, I don’t think it’s remotely beatable without focusing a significant effort toward beating it. Those sideboards with
nine removal spells could easily have ways to fight Burn as well. You’re just spewing value by not trying.

You might think R/W Burn is a “stupid” deck that anyone could play and you don’t think anyone is going to play it. Well, you are probably wrong on both
counts.

Mind Rot is an experiment. I haven’t gotten a chance to actually test it since I thought about it minutes before writing this article. However, I have high
hopes and will certainly inform the world of my findings once Magic Online comes back up from downtime. There’s some other weird stuff I’m trying, like the
Eidolons in the sideboard, but I won’t know if they are what I’m looking for until I try them.

My logic is that in addition to being good against Burn, it can also be good against other midrange decks and control decks. Most decks are opting to go
with the power over synergy route, and I can’t say that I blame them. However, when they’re choked on resources and don’t have many ways to gain card
advantage, Mind Rot can be brutal.

Of course, Mind Rot is a pretty bad topdeck on turn 10, so you have to be careful about how much discard you actually want to run in your deck, but that’s
a risk I’m willing to at least try.

Honestly, the biggest strike against Mind Rot is that it does nothing to affect the board. I’ve been nickeled and dimed by Lifebane Zombie enough times to
know that oftentimes, a 3/1 beater can be more powerful than a quick two-for-one.

For right now, this is my pick for best deck, which shouldn’t surprise anyone. I feel like green and red both have great decks out there and there’s also
something to the five-color Nightveil Specter strategy. U/W Control is almost certainly great also. I just haven’t gotten to play with it yet. I did just
purchase those Sphinx’s Revelations for this sweet deck though…

I cleaned it up slightly to look like this:

B/X Devotion is not a favorable matchup and that all comes down to mana efficiency. At first I thought it might be because their topdecks were better in
the mid- to late game, so I started sideboarding out Thoughtseize and Sylvan Caryatid and seeing how far that could get me. As it turns out, I played a
couple of games where I could match them card advantage-wise, but fell short because I died before I got to cast the spells in my hand. Sylvan Caryatid
would have been clutch.

I learned a few things from this experiment. The first is that Nightveil Specter plus eight sources that can produce any color of mana is pretty powerful.
The second is that Kiora, the Crashing Wave plus Courser of Kruphix sets up a nice endgame against control where you have a sizeable mana advantage. Kiora
performed much better than Jace, Architect of Thought overall, which is worth noting. The third is that people have no clue what sorts of shenanigans you
could be running with a Mana Confluence/Sylvan Caryatid deck. Feel free to experiment with weird stuff.

While the control matchup is already pretty good, I wonder if the Savage Summoning/Aetherling combo I saw in a U/W Control deck could be useful here. That
got me to wondering if I could shoehorn that into the Four-Color Enchantress decklist I posted a couple weeks ago. If that combo actually ended up being
good, we could probably cut the red and streamline the deck, but it’s just a thought.

Moving on, we have my latest look at red devotion.

As of right now, I still favor the Firedrinker Satyrs maindeck over Stormbreath Dragons. Your results may vary.

Why the white splash instead of black or green? Doesn’t Chained to the Rocks just get Abrupt Decayed when you need it most?

Yes, it does; however, when they don’t have Abrupt Decay, Chained to the Rocks is the best removal spell. Also, the other white cards, such as Banishing
Light and Assemble the Legion are incredibly powerful and solve numerous issues for the deck.

Against Desecration Demon specifically, it’s possible that every single time you use Chained to the Rocks, it gets Abrupt Decayed on the next turn;
however, that’s still a turn where the Demon is out of the way and you might get to play an extra spell to put you even further ahead. Even if they Decay
your Chained to the Rocks, you might already be so far ahead that it no longer matters.

There are also the games where they just don’t have it or are forced to use it on Turn 2 or 3 to stop your onslaught.

Where did Stormbreath Dragon go?

Assemble the Legion might be a stronger card in the matchups you’d want Stormbreath Dragon for.

Without Stormbreath Dragon, why are we still playing Nykthos and the awful, awful Burning-Tree Emissary?

If you go two-drop into Burning-Tree Emissary + Nykthos, Shrine to Nyx on Turn 3, your draw is probably pretty good and you should win. However, there is
some merit to eschewing the potential for free wins and playing the consistently awesome Mutavault instead. One of the main issues I have with Mutavault
over Nykthos is that if you are stuck on RR + Nykthos, you will likely be able to cast Boros Reckoner and eventually Fanatic of Mogis. With Mutavault, that
is not the case, and would likely require a retooling of the deck in general.

Another deck with a Staff in the sideboard? You must really hate Burn!

To be fair, we are in the colors of Warleader’s Helix and could play that instead. I think Staff is going to gain you more life over the course of a game
though.

As for something a little more different…

The original list comes from Eric Hawkins, whom you might remember from my Heliod brews before I left for WotC. If you don’t, because Heliod sucks and
you’ve ignored basically every decklist that contains him, that’s OK too.

Paging Bard Narson, you have a job to do. If anyone can make this not a pile, it’s you.