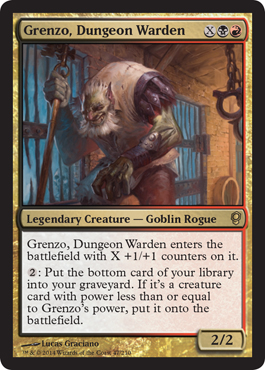 Conspiracy is shaping up to be one of the most intriguing supplemental sets we’ve ever seen, with cards for fans of essentially every format of Magic that
isn’t Standard.

Thankfully, all five of the characters shown on the Conspiracy announcement page are confirmed to be legendary
creatures, ripe for Commanding armies of 100 cards! With our dear friend Grenzo finally revealed, that leaves the Mikaeus-looking gentleman on the right as
the lone mystery. But we’re not here to talk about Grenzo’s allies/enemies/saboteurs/puppets, we’re here to look at the most interesting Goblin Rogue since
Goatnapper took the world by storm in 2007.

What exactly is going on with this guy, anyway? Well he’s essentially an X/X for X. This means that he is never cast late. Nor is he cast early. He arrives
precisely when he means to. Since he lies at any spot in the curve, he can supplement an aggro deck as well as a control deck, allowing flexibility rarely
seen among Rakdos-colored cards. Of course, he is not just a curve filling beater but is also a means to interact with a part of the game that has
not really been explored before (outside of Mental Magic staple Cellar Door):
the bottom of the library.

This ability to flip cards off the bottom of your deck and getting a creature for free is…how do you say…insane. Yes, the average 40-card deck
contains about 15 creatures on the high end. That’s only about a 35% chance to hit a guy, after considering you have Dear Mr. Grenzo in play. But if all it
costs is two mana for The Dungeon Warden to wander about unlocking cells with his Keyblade,
trying to set loose all the miscreants and ne’er-do-wells of the world, well, I’m OK with that. Also, sometimes he opens up a cell and finds an entire
Mountain just sitting in there, minding its own business. Try to picture that. Most creatures aren’t going to have more than three or four power, so after
a scant initial investment, finding not only a creature, but also the mana required to cast it, is quite the deal, I’d say. This is all without even trying
to hit expensive creatures with unnaturally low power for their mana costs (Pentavus, Pontiff of Blight, etc). Did I mention this ability can be used at
the end of an opponent’s turn, making cards such as Zealous Conscripts and Flametongue Kavu even more diabolically awesome?

Of course, his biggest addition to Magic lore will be his pose. Artist Lucas Graciano
already gave us “The Shadowborn Demon Boogie,” as demonstrated here by SCG Premium Author, and lover of Hot Dogs Brian Braun-Duin. 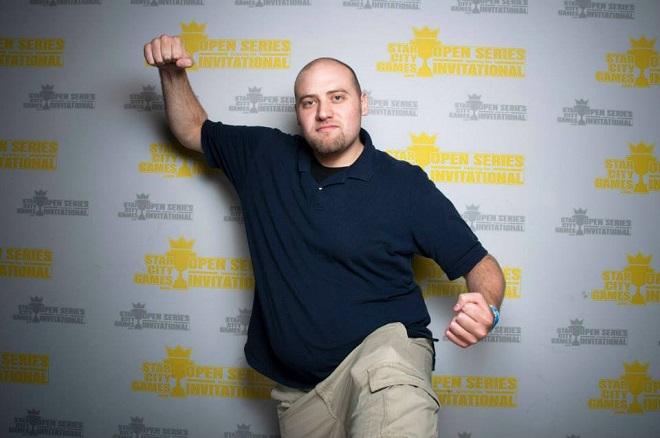 The next person to Top 8 an SCG Open needs to do the “Grenzo Shuffle.” I can only hope that person will be me, whenever I’m not busy slinging 100 cards.

Speaking of 100 cards, it would be remiss of me to mention, nay, provide an example of Dirty G in my favorite format. While my time on Dear Azami was short, yet sweet, I figured this was the perfect chance to give a quick little
runback. So here’s one way to sleeve up Grenzo:

Reito Lantern, eat your heart out.

Grenzo may be a Goblin, but if you want to do a Black and Red Goblin deck, Wort, Boggart Auntie has got you covered there. There is not enough support for
+1/+1 counters in the Rakdos colors, and Rogue is not a full-fledged creature type, so here’s a good ol’ fashioned aggro deck that is not completely
reliant on your Commander, yet still needs him to be in play in order to be running at full sail.

The deck is over half creatures, has a neat little Goblin tutoring process that I imported from my Jaya Ballard deck, and most every creature excluding
the Gods can be cast with a Grenzo with four power. Remember, his ability only compares the power of Grenzo and his newly released charge, so things that
increase the Commander’s power outside of his own +1/+1 counters can be leveraged.

You might notice that outside of the hilariously synergistic Vessel of Endless Rest, there’s no mana ramp. While you honestly don’t need a lot of it to
cast your dinky little creatures, it’s honestly quite refreshing to be released from the tyrannical grasp Sol Ring has on most Commander decks.

Most of these cards are on the weaker side of what you see in Commander, so besides just spewing out your creatures via Grenzo, you’re heavily leaning on
Skullclamp to stop by the 7-11 to fill up on gas and Flipz pretzels. Or you can just get Flayer of the Hatebound in play and get ’em dead.

Wizards of the Coast is finding more and more areas of our game to exploit to sate our everlasting hunger for new experiences. Grenzo’s bottom-of-library
manipulation not only allows us to track what is left in our deck from another viewpoint, it opens up more doors for exploration and weird synergies with
other abilities such as Hideaway and Scry. What about an Oracle of Mul Daya effect for the bottom of our library? Our entire library revealed Dredge style?
Using our opponent’s deck/sideboard against them? While the possibilities in current Magic are technically finite, the guile and emotional intelligence
(Shoutout to the Izzet League) of WotC is near boundless and I’m glad they’ve kept Magic afloat for these 20 some years.

Now I just need to fulfill my personal goal of digging up Niv-Mizzet, Dracogenius with this guy against Justin Parnell in our weekly Cube gatherings. That’ll show him.