First up, we have the deck I featured in a video yesterday,
although a lot can change in a day.

So far, I’m 5-0 and 4-1 in Magic Online Leagues with the deck, although those were with the old lists. Those numbers shouldn’t be taken as gospel because
it’s hard to say whether or not my opponents were bringing their “A” game, their best deck, or playing to the best of their ability. I think it’s safe to
say that I picked up some percentage points based on them not knowing my exact list too.

I took my own advice on the manabase and sleeved up a similar manabase to Paul Dean. This manabase has eighteen black sources, nineteen green, sixteen
white, thirteen red. However, there are only nine fetchable lands and fourteen fetchlands, plus two Nissa, Vastwood Seer, so maybe I need to tone it down a
bit. The odds of you running out of fetchable lands and it mattering is very slim, but it’s possible that your seventh land could be a Flooded Strand
without a land to fetch, which almost certainly is a problem. With this manabase, you have to be more careful about each individual land you fetch, which
is probably mental energy that’s not worth taxing if you can avoid it.

The mana is now good enough for Silkwrap, so I made that change. The other big difference is that I don’t have much of a lategame anymore. Dragonlord
Atarka was not very relevant in many of the matchups I faced, so I relegated it to the sideboard. Languish befell a similar fate. Perhaps I wasn’t playing
against many G/W Megamorph decks, but perhaps they all disappeared. 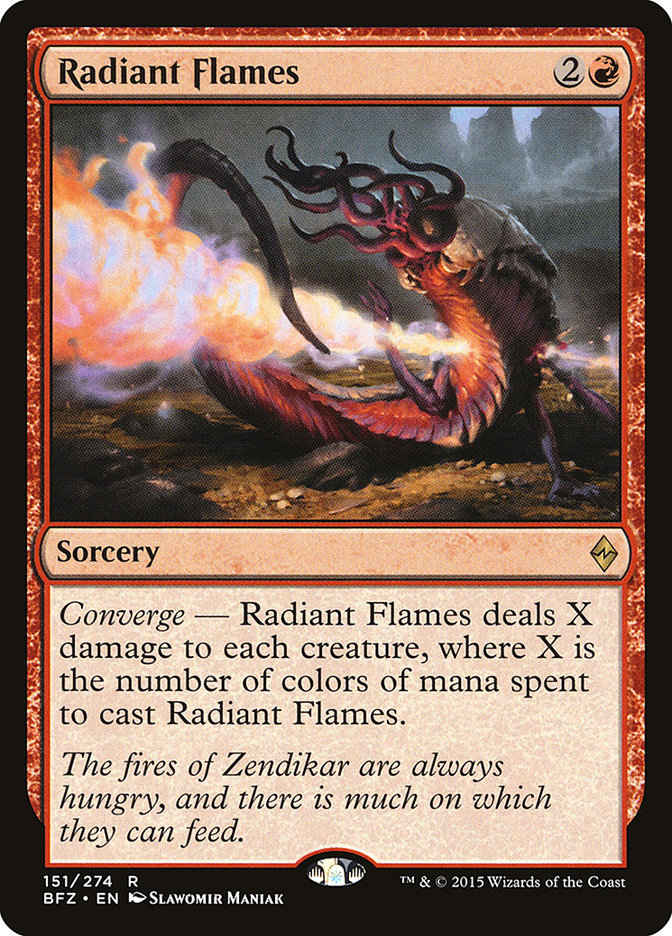 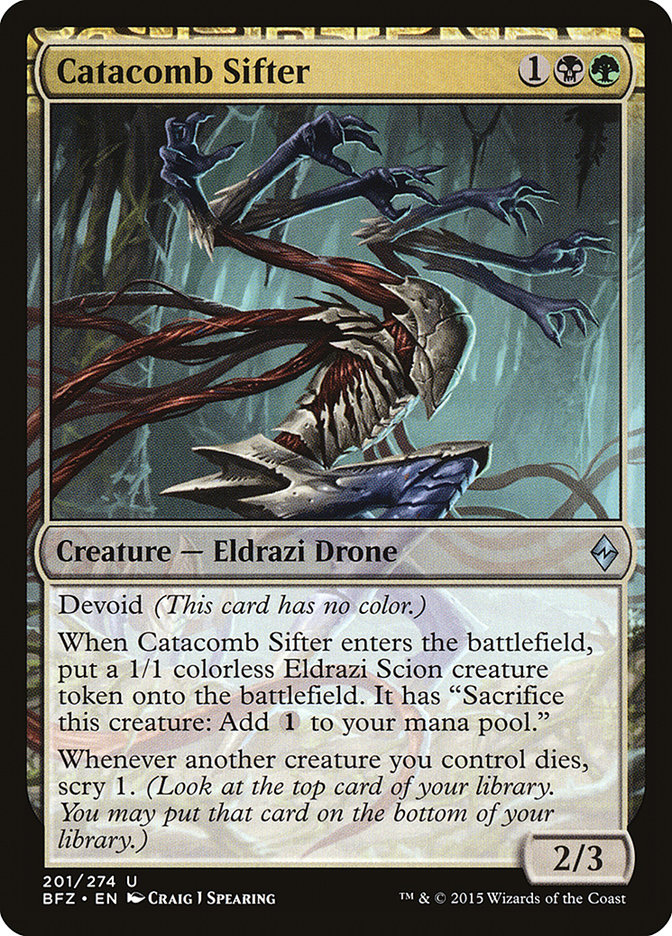 At this point, I’m splashing Radiant Flames, and is that worth it? For starters, I’m going to have red duals in my deck either way, and so far the Flames
have been excellent. Of course, I could go down a different route with more Catacomb Sifters and some Wingmate Rocs, and that’s something I’ll be trying
next. Either way, one thing about my Abzan lists that is going to be a constant moving forward is Catacomb Sifter. It is by far the best card no one is
playing right now.

The second deck I like is an update from Fabrizio Anteri’s Pro Tour Battle for Zendikar deck, which he used to finish second
in the recent MOCS.

It’s also similar to this deck:

I changed some stuff.

The big difference is Secure the Wastes, which is a card I sort of overlooked. We had that card in and out of a few decks, but never tried to make it a
focal point alongside Gideon, Ally of Zendikar, and that was likely a mistake. It’s already done well enough in Sam Black’s Bant Tokens deck that people
are playing Virulent Plague, and maybe these decks are still a little too weak to that card. We might have to wait until people stop playing them to break
out the Secure the Wastes, but I’ll be ready.

From playing Standard, I’ve learned two things, both of which are very important: 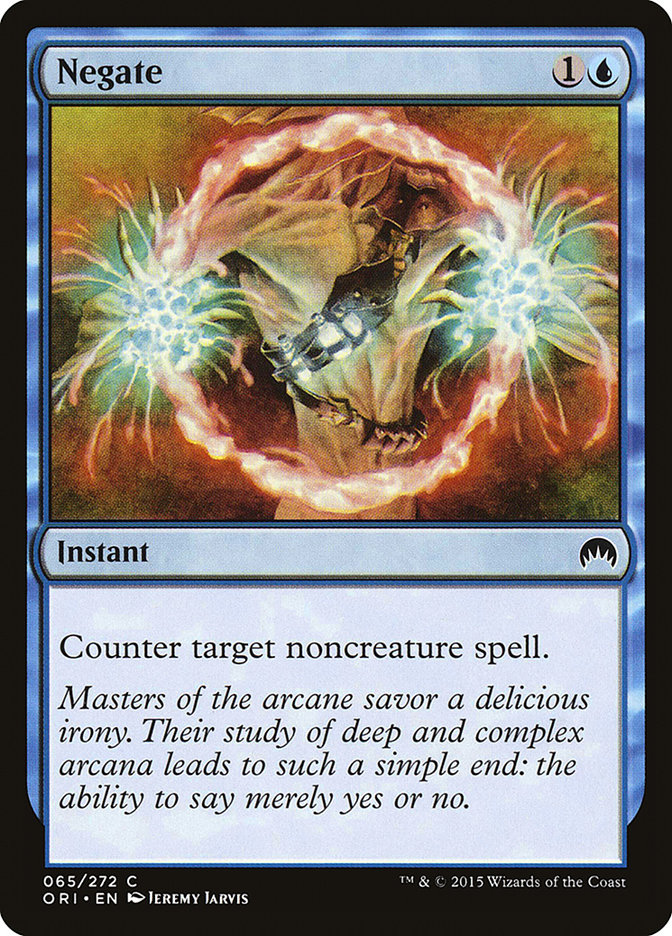 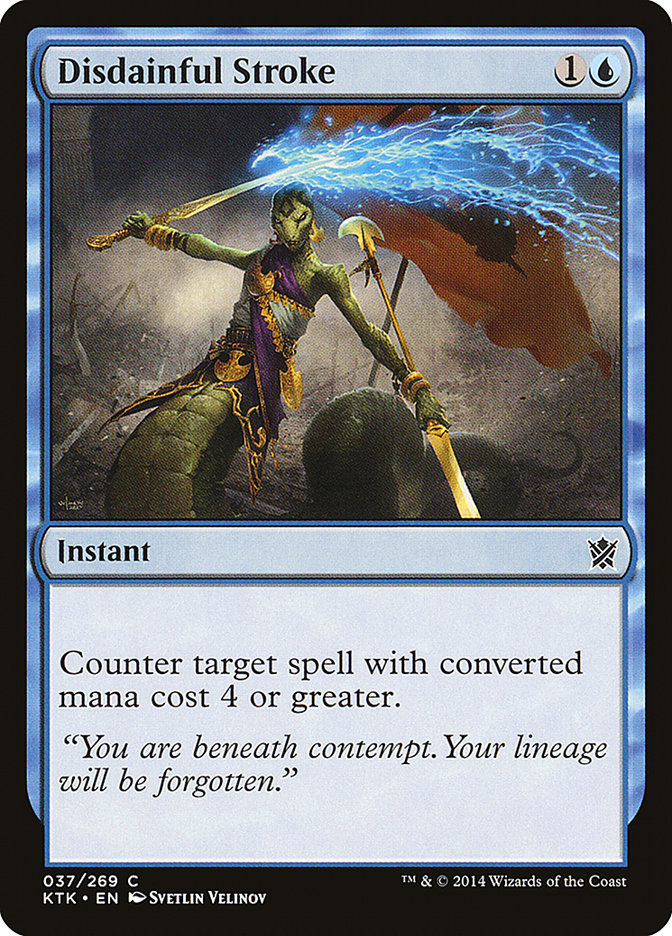 You want something to hit big cards out of your sideboard, and counterspells are typically the cleanest answers. Most people opt for Disdainful Stroke, but
I think that’s wrong. We’re not countering Siege Rhinos and Dragonlord Atarkas anymore since those can be dealt with in other ways. Negate is the card you
actually want.

Duress and/or Dispel are both excellent as well.

Painful Truths is right where I want to be. 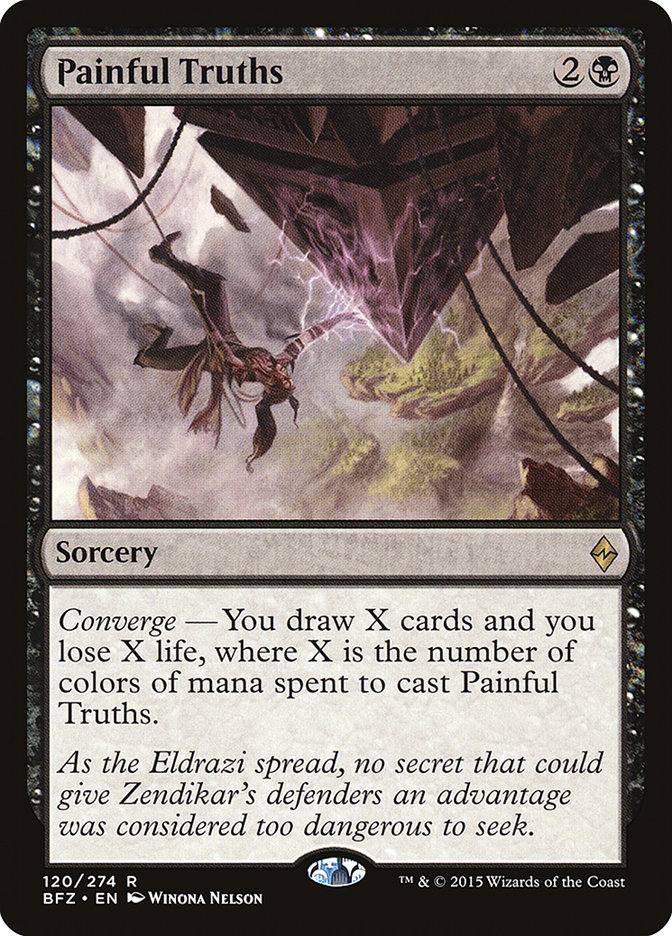 Holy moly is this card good. Three life is not cheap, but if your deck has a bunch of incidental lifegain, it won’t feel like a big deal. Even the tempo
deck, Jeskai Black, can’t really take advantage of you losing three life if you’re untapping and killing both their creatures.

Drawing three cards is such a great way to ensure you hit your land drops, curve out, and win the battle of attrition. Treasure Cruise and Dig Through Time
are both excellent, but if you play Painful Truths over those cards, you get to spend your graveyard on things like Murderous Cut and Tasigur, the Golden
Fang.

As for Modern, I’d play one of two decks. The first is Grixis, but we’ll get to that in a bit. First, I’d like to talk about version 1.0 of a deck that I
think will be good at some point. Oddly enough, it’s borrowing a lot of ideas from things that are going on in Standard.

The idea is to play a bunch of resilient threats, including some things like make tokens like Lingering Souls and things that pump them up like Gideon,
Ally of Zendikar and Sorin, Solemn Visitor. That should give you an advantage against decks like Grixis and Jund. Against the combo decks, I have light
disruption, but mostly I’m just trying to present a fast clock.

My deck is built trying to have a shot against everything, which is worth noting for Modern. Decks like Burn, G/R Tron, and Amulet Bloom are difficult to
beat for decks like Abzan, but with this build, I think it’s possible to be reasonable against each of those decks. Realistically, it might be better to
skimp on one of those matchups, but for now, I’m aiming high.

Against Burn, you could go a few different ways. Kill their early creatures so they don’t have any cards that deal you more than 3-4 damage per card.
Letting Goblin Guide or Eidolon of the Great Revel hang around is a surefire way to lose to Burn. The only other option, aside from playing Lightning Bolt,
is to make them irrelevant with big creatures or gain a bunch of life. While this deck can Path to Exile a Goblin Guide, it’s not exactly what you want to
be doing. You could also load up on Feed the Clan, but that’s an incredibly narrow card, and Modern is a wide open format, so I’d prefer to not do that if
I didn’t have to.

So what am I doing? In the maindeck, there’s a pile of Tarmogoyfs and Knight of the Reliquaries, which should function as Moats once they come down. Knight
can search for Vault of the Archangel, but it’s still a weird dance when Skullcrack is involved. Sorin, Solemn Visitor can also put in some work. There are
also the Dromoka’s Commands, which solve the issue of trying to fade the topdecked lethal burn spell, which is a situation that comes up frequently in the
Tarmogoyf versus Goblin Guide matchup. 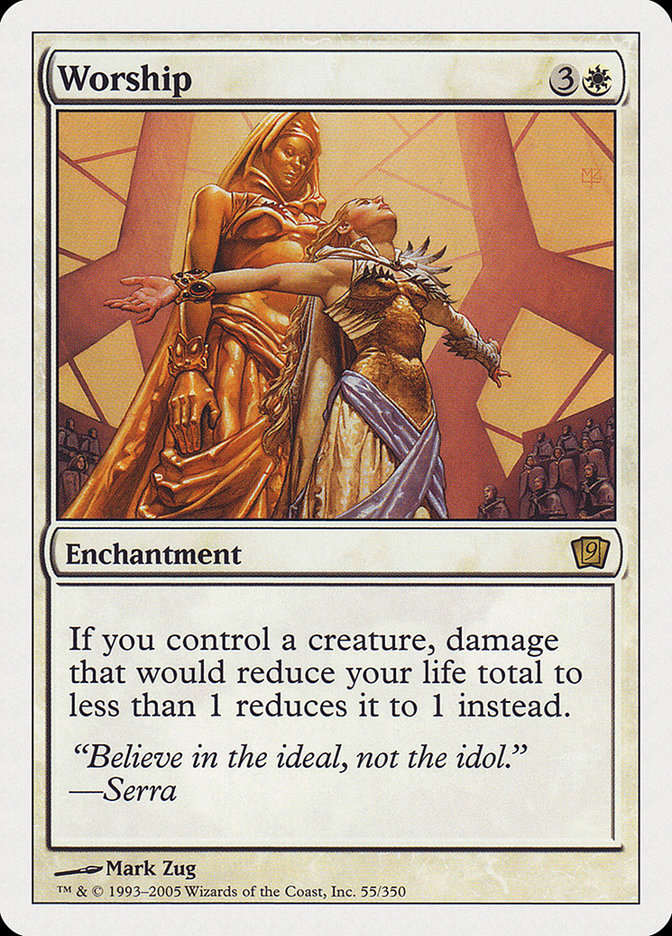 After sideboard, I have this nifty card called Worship. Now, it might seem narrow, similar to Feed the Clan, but it actually has much broader applications.
Things like G/W Hexproof and Affinity also have a difficult time beating a Worship, especially when the deck with Worship also has Lingering Souls.
Affinity can still get you with Inkmoth Nexus, but hopefully that’s all you need to deal with. Either you can block it in the air or kill them all with
Path to Exile and Ghost Quarter. For Burn specifically, there are also some Duresses, mainly to take out Skullcrack, but also to just trade profitably with
a burn spell, and there’s the singleton Leyline of Sanctity.

The plan against G/R Tron is to play a Turn 2 Knight of the Reliquary and start Ghost Quartering them. In practice with similar decks, this has been a
viable strategy. Sometimes you’re on the draw and they have the nuts, but I think you’re a favorite. If you don’t have an accelerant, Stony Silence can
slow them down. Gaddock Teeg also does a number on G/R Tron.

Amulet Bloom isn’t so easy unfortunately. Worship might actually be great against them though, at least in one of the sideboard games, because they
typically cut the Hive Minds against B/G/X decks. If they do bring the Hive Minds back in, hopefully you can keep them off-balance with discard. If you
wanted to hate on them, Aven Mindcensor is likely your best card.

While my approach of trying to beat everything might be misguided, I do believe there is something here with Sticky Abzan. If I wanted to skimp on G/R Tron
hate, cutting Knight of the Reliquary for a card that is more synergetic would be give me a lot of flexibility in deckbuilding. Maybe I’d end up with
something sweet.

While Abzan is likely great, Grixis is where my heart is.

This is an update to my Grand Prix Oklahoma City deck, except with more of an emphasis on beating Burn. Those Vampiric Links are swappable with Leyline of
the Void if you’re scared of random graveyard decks like Dredgevine, Aristocrats, Living End, or the mirror. I am terrified of those decks, but maybe I
should be more worried about Burn?

Not much has changed in Modern, as far as I can tell. If Scapeshift is getting more popular, I think that bodes well for the deck with Hymn to Tourach and
Stone Rain. Radiant Flames is a nice upgrade from Battle for Zendikar. I like the idea of it being a scalable sweeper effect. Sometimes you want
to take out a horde of Spirits but don’t want to kill your Jace, Vryn’s Prodigy. While hitting RRR in order to cast Radiant Flames for one isn’t easy, it’s
definitely doable, and I think that makes it better than something like Pyroclasm. Then again, they could be more Izzet Staticasters instead.

I’m playing some weirder cards this time around, some of which warrant testing. Most of the cards are easy enough to figure out how useful they’re going to
be. The vast majority of how I build my deck is going to be based on what the metagame is. If you could tell me exactly what your matchups were going to
be, I would probably be able to build you a Grixis deck to beat them all.

If I were playing in Grand Prix Indianapolis, I would play Abzan Red. I could see just playing Jeskai Black though. Todd Anderson keeps telling me that
Jeskai Black is basically Flash and that’s a good way to get me interested. If I were playing in the main event at #SCGDFW, I’d like to say that I’d play
Grixis, but I might audible to Abzan.