How To Beat Jeskai 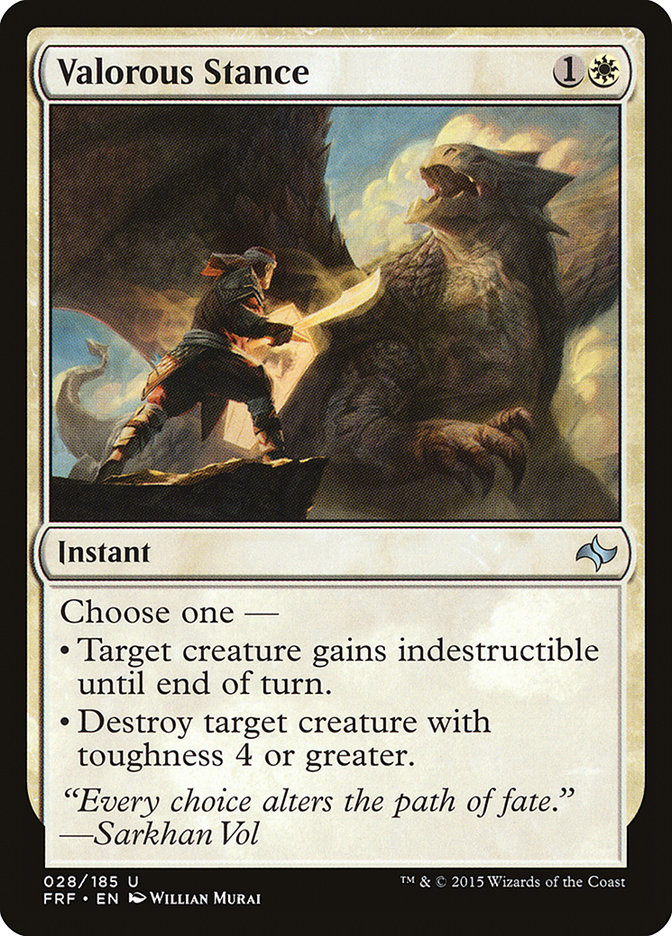 Right now, the answer is either go wide or play things that line up well against their removal. Each of the Jeskai decks in Top 8 contained Valorous Stance, a card whose usefulness certainly wanes once people stop walking into it. If you take a look at the G/W Megamorph deck, you’ll notice that basically none of the creatures are weak to Valorous Stance. If you’re playing Jeskai, you likely shouldn’t be loading up on that effect simply because of G/W Megamorph’s presence in the metagame.

That doesn’t mean that Jeskai just has to stop playing things that kills big creatures, because then you might run afoul of fringe stuff like Dragonlord Dromoka. If you’re a Jeskai player, the answer to the weird stuff is probably Crackling Doom, which most people are playing at this point anyway. So, why exactly, do you need Valorous Stance when it’s potentially a dead card against the other most popular matchups? You don’t exactly want Valorous Stance against the mirror either.

It’s a fine line to walk between tuning your deck to beat the popular decks and tuning your deck to only beat the popular decks. If you’re playing Jeskai and Valorous Stance isn’t good against the most popular decks, you may or may not be able to cut it from your maindeck entirely. I find it better to hedge against the field more often than not, even if it means sacrificing some percentage points in the mirror. For example, if you play one Valorous Stance and another card that does Valorous Stance’s job but is also playable in the mirror, you should be in a good spot.

Right now, we should be looking for things that exploit holes in the popular decks. Decks like The Aristocrats (specifically those with Abzan Ascendancy) and Atarka Red can swarm past Jeskai’s removal suite. However, that strategy only works in Game One scenarios as Jeskai typically brings in some amount of Radiant Flames. Stealing Game One is likely, but those decks need a solid plan against sweepers after sideboard. Having things that don’t die to Radiant Flames is key, as is having ways to deal with Jace and Mantis Rider. If you have all that, Jeskai should be a relatively easy matchup.

Jeskai isn’t a deck that is rock solid. It relies on small creatures to do the bulk of the heavy lifting; if you can stop Jeskai from gaining traction, they’ll have a tough time leveraging their pile of removal into a win. Oftentimes they are trying to clock you with a Mantis Rider while they keep themselves alive, but without that Mantis Rider they won’t be able to kill you before you kill them. They aren’t a true control deck, and they can’t answer everything. Leaving Jace, Vryn’s Prodigy unchecked is one of the easiest ways for Jeskai to bury their opponents, so have ways to interact with Jace or Mantis Rider if possible.

Another thing to note is that Jeskai specifically hates things like Silkwrap. If you’re killing their creatures, at least they can bring them back with Ojutai’s Command or delve them away with Treasure Cruise. They don’t mind trading cards in the short term, but they need to actually trade.

How To Beat G/W Megamorph

This one is trickier. On the one hand, G/W Megamorph is weak to Radiant Flames, but on the other, there’s Gideon, Ally of Zendikar, Wingmate Roc, Deathmist Raptor, and Dromoka’s Command that don’t really care about it. G/W Megamorph, as Cedric Phillips showed us yesterday, is (probably) the best deck in Standard right now. I don’t buy into the splashing hullabaloo, but it’s certainly an option.

From my experience, midrange decks that are slightly bigger have the edge, such as the Bring to Light deck I played at #SCGINDY. I easily defeated two G/W Megamorph decks, although my last-minute addition of Silumgar, the Drifting Death helped immensely. G/W Megamorph is a deck that’s tough to keep down. They have card advantage and sticky creatures, so we can’t rely on removal to keep them down. Your best bet is using removal to keep them off balance while you pound them with a Siege Rhino or something. Silumgar, the Drifting Death comes down just early enough, shrugs off their removal, and blocks any non-Deathmist Raptor creature of theirs. It’s simply one of the best finishers against them.

Atarka Red is pretty great against G/W Megamorph since they can go under it with Monastery Swiftspear and removal, go around it with Dragon Fodder or Hordeling Outburst, or even just go through it with Temur Battle Rage. G/W Megamorph can’t stabilize in time and has very few ways to interact with any of Atarka Red’s gameplans. Whether or not G/W Megamorph will win the match against Atarka Red greatly hinges in how they perform in the sideboard games where they actually have a fighting chance.

Evolutionary Leap and Mastery of the Unseen are G/W Megamorph’s ways of beating the bigger decks, but those cards often lose to a powerful threat. For example, if Esper Dragons has Dragonlord Ojutai hitting you, Abzan has a pile of Siege Rhinos, or Bring to Light has Silumgar, the Drifting Death, they can typically keep your board clear long enough to kill you. Additionally, those enchantments are basically only good when you have excess mana to spend on them. Granted, that isn’t difficult with 25 land plus Nissa, Vastwood Seer, but it’s an important point. Sometimes you’re stuck on four and your cards just don’t help you.

It might seem like G/W Megamorph has all the tools, but it’s still weak to sweepers plus big threats, especially fliers.

Jeskai and G/W Megamorph are both exploitable. Together, they make up a large portion of the metagame, and they both have a similar weakness – they don’t do well against decks that are trying to go over the top. Ulamog, the Ceaseless Hunger might be great at Pro Tour Battle for Zendikar. Rally the Ancestors might be another excellent sleeper choice.

This is likely not a good list, but it basically has everything I’d want. If the Pro Tour further solidifies the metagame, tuning a deck like this might yield good results. The two-mana ramp spells are all creatures, which are all vulnerable to the early removal people have to play in order to deal with Jace. Instead of ramping hard early, this deck tries to bridge the gap between two and four mana by using removal. By slowing the game down you’re effectively doing what ramping does, which is give you access to more mana while you are still at a healthy life total.

Ramp decks have a plethora of options, including a heavier Eldrazi package with Conduit of Ruin, From Beyond, and Oblivion Sower. Nissa, Vastwood Seer might make a nice roadblock that’s also a threat against controlling decks. You could try Ugin, the Spirit Dragon at the top end with Shrine of the Forsaken Gods. Overall, I’m not sure what the best build of this deck is for the metagame.

The other option is to go under them. Atarka Red certainly does that best, but there might be other options. I just don’t know what they are.

One of the reasons the format might seem stagnant already is the lack of exploration with Battle for Zendikar cards. Wasteland Strangler was one card in particular that I was looking at just because of how good it is against Jeskai and G/W Megamorph.

This deck was pretty sweet, but it was kind of a clunker. However, turn-three Knight of the White Orchid into Silkwrap, Transgress the Mind, a sideboarded Disdainful Stroke, or even just leveling up my Hangarback Walker was excellent. If you could follow that up with a Wingmate Roc, you’d be in excellent shape. With thirteen ways to exile your opponent’s stuff Wasteland Strangler was basically always online, which definitely makes it an appealing card.

Archangel of Tithes is another card that might just be awesome. Several of the G/W Megamorph decks had them in their sideboards last weekend, and I can’t imagine a deck like Atarka Red ever beating it. Perhaps two in the maindeck is low, but I was concerned with the number of expensive spells in the deck.

This deck lead to an interesting question: if the format appears to be full of creatures, how far can we slant our decks towards beating them when control is theoretically still a thing? Esper Dragons had a great weekend at #SCGINDY, although it was nowhere to be seen at #SCGATL. That was probably because G/W Megamorph was out in such force, but what if Esper Dragons could fix that matchup?

This weekend is my second Pro Tour after returning to the competitive Magic scene, and I couldn’t be more excited. In the last one, I was live for Top Eight with a few rounds to go but ultimately fell short. I’m hoping to improve on that this time. In the meantime, we need to move this Standard format forward! Jeskai and G/W Megamorph can be beaten… we just have to find the way.

I’m going to do my part at Pro Tour Battle For Zendikar, but I can’t make any promises.