Can you believe they made a better version of Plasm Capture? 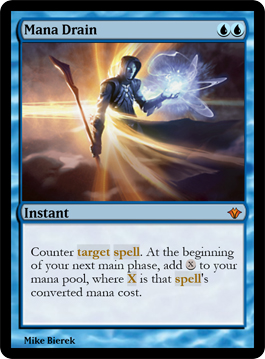 “What do you mean, they took out mana burn?”

Now this, my friends, is a card. It just may have been the spell that gave blue players the reputation of being egotistical, condescending
elitists, which is only sometimes unfounded. Even though I, like most of us who don’t have decks the price of flying cars, only see it sparingly in cubes and Commander, man, when I do, do I feel….emotional.
And this is coming from some new-blood youngster who started in Zendikar. Price aside, maybe it’s a good thing this was only printed once.

While the art on this version is actually comprehensible, I can’t help but feel that they missed an opportunity to have Jace wielding arguably some of the
best countermagic ever. Just slap some patronizing flavor text on there, and you have an unpassable card! Okay, just maybe it’s already unpassable, and
just maybe I’m a bit biased, but that’s beside the point.

But let’s take a step back from current magic, and into the days of yore. Once upon a time there was a deck called…um…The Deck, and was crafted by
Brian Weissman. In the classic (innovative at the time) U/W style, your goal was to win by not dying. And look what card was one of the few four-ofs.

Even twenty years ago, people knew they were on to something

special. Now, it may not draw you physical pieces of cardboard, but it does give you a large helping of the game’s most essential resource, mana, all while
being a “removal” spell. Sort of like how Bloodbraid Elf can give you a Black Lotus and a Gray Ogre, which essentially matches The Drain’s power, and
viability, if you look at any of my past cube decks.

By today’s standards, everybody would understand this sort of effect would be broken. Heck, even Counterspell, the “fixed” version of this card from
Legends with weird Matrix art, is lauded as too good for present times. It may not be one of the Legendary Power Nine, but it sure as heck has a lot more
going for it than Timetwister.

If Modern Masters is any precedent, Vintage Masters is looking to be an extremely fun Limited format. Sure, it’s not on physical paper, but the cards are
just a wee bit better than Grizzly Bears, and you get to cast cards such as Dr. M.D. in an actual game of Limited. Plus, I know we’re all glad that the
“Special” rarity is only for online, and not going to create another Lotus Cobra debacle.

Thankfully, outside of the rare Vintage tournament, Mana Drain lives on in my beloved Commander. Counterspells generally aren’t that good, as you’re only
hindering one person out of your three opponents instead of helping yourself, but this one gets a pass. You haven’t truly lived until you’ve countered your
own card off of Mosswort Bridge in order to cast a better one in your hand.

Magic was an entirely different game back then, and holding UU open may have evolved over the years from Counterspell to Mana Drain to Deprive to Nullify,
but it doesn’t matter if you’re countering Bartel Runeaxe, or Jace, the Mind Sculptor. The result is still the same: immense frustration for your
opponents. And isn’t that really why we blue mages play the game?