Magic can be a very expensive game to play at a competitive levelâ€”doubly so if we maintain a collection of cards in real life and on Magic Online. For many of us, drafting is one of the most enjoyable Magic formats, but it can be prohibitively expensive. Especially online, where trading often is regulated by the accessibility of bot networks, it can be difficult to enjoy ourselves while also obtaining the cards we need unless we grind a soft format like Block Constructed and turn the prize packs into cards.

Triple small-set drafts are an excellent means of straddling the fence; while they aren’t the official draft format (and thus many people who intend to compete at the highest levels will want to practice the real format), they still can provide a significant level of fun while simultaneously helping us build our collections for a reduced cost. This is doubly the case for Dark Ascension, because like Worldwake, it will not be part of the formal draft format once May rolls around. This means that the quantities of rare and mythic cards from this set likely will be lower than those for many other sets, causing the prices of chase rares and mythics artificially to inflate later this year or next year.

This also means that we should consider what Magic author Blake Rasmussen once called the Duck Yew Point when looking at triple DKA draftsâ€”we might, in fact, consider adopting his analysis as a general principle:

“I should note that the Duck Yew Point, the point at which a rare draft becomes the correct draft, is a fallback point and in no way your optimal drafting strategy, at least not if your intention is to win the draft. Choosing Pithing Needle over Essence Drain or Tidings is pretty much guaranteed to make your deck worse. As such, I don’t actually recommend rare drafting. However, the trick is to find that point, the DYP, where rare drafting increases the expected value (EV) of the draft, because increasing your EV is everything when looking to make money online.”

While his entire article is recommended reading, we can break down drafting a format like triple DKA into two components: 1) the fun of drafting and 2) the goal of producing an EV equal to or higher than the cost of entry.

On Magic Online, the maximum cost of a draft like triple DKA is two tix plus three booster packs (we’ll assume we’re purchasing them from the Magic Online store instead of shaving 30-40 cents off of the cost by purchasing tickets from external vendors at a .95:1 ratio and then packs from bots at a 3.8x:3.99 ratio). This means that our initial investment in a draft is $13.97. Because we’re restricted to the less lucrative 4-3-2-2 payout format, we only can recoup our cost if we a) come in second place and draft at least two tix worth of cards, b) come in third or fourth place and draft at least six tix worth of cards, c) lose in the first round and draft at least 14 tix worth of cards, or d) win the draft. Interestingly, winning the draft often may be the more likely outcome than recouping our entire cost through picks.

The good news is that any triple small set draft has a high threshold of redundancy. What I mean by this is that because there are so few cards from which the booster packs can be created, there are very few unique effects at the common rarity that cannot safely be passed in order to pick a higher EV card. While most of us would always pick something like Havengul Lich, Huntmaster of the Fells, or Sorin, Lord of Innistrad over a common in a 4-3-2-2 draft, some of us might waver when choosing between, say, a Fires of Undeath pack 2 when we’re in black/red and a Dungeon Geists or Geralf’s Messenger (or Gravecrawler or Thalia, Guardian of Thraben). Even more of us would significantly waver given the same choice between a Fires of Undeath and a Drogskol Captain, Diregraf Captain, Lingering Souls, or Strangleroot Geist. Then again, when Gut Shot was the Standard go-to card it was selling for over three tix online, and Dismember still retains a value over two-and-a-half tix.

Triple Dark Ascension is a unique environment in which we might possibly increase our overall EV by selectively value-drafting more often than we would in most other formats.

But let’s put that theory into practice. I took some time over the weekend to draft triple Dark Ascension six times. As a ruleâ€”to function as an experiment for this articleâ€”given a choice between a high value card (defined as one of the four uncommons listed above or a rare/mythic with a value over one-and-a-half tix) and a playable common, I always tried to select the high value card (only three times in three drafts did I need a specific common badly enough to select it over the higher value card). Excluding for a moment the value of the cards that I picked, I’ll track my EV across the six drafts.

Because I’m using most of the packs that I win to draft again, though, our actual EV from packs is much lower than we might expect. Viewing a six-draft sequence as simple input-output, I paid $27.96 for six drafts and ended up with four packs ($15.96), a net loss of $12. Thus, I’ve only broken even if I was able to draft at least $12 in cards. Using current Magic Online ticket prices from MTGO Traders:

In many cases, I was unable to play the value cards that I drafted in my deck unfortunately. However, our total value in cards amounts to roughly $43.50, much of which comes from the single Huntmaster of the Fells. I fully expect the cost on the Captains as well as the Strangleroot Geist to increase within the next year, but using current prices we essentially drafted six times and made $31.50 in profit.

While professional players will be able to post better averages than my 50% draft win percentage, these numbers do illustrate the general futility of 4-3-2-2 drafts. However, they also illustrate that it is possible to win in this format while liberally applying the Duck Yew principle in order to gain a bit of EV.

But let’s say that we want to draft triple DKA anyway, for fun and to bolster our collection from this set. There are a few interesting tidbits that I gleaned from my drafts. In order to examine these in more depth, let’s look at the actual draft decks.

(1-1) In my first draft, which was my first experience with the set, I foolishly assumed that Screeching Skaab had flying (yes, RTFC…but it’s not often that blue gets a 2/1 creature that sits on the ground and has no activated abilities). By the time I realized my mistake, it was too late. The deck performed reasonably well, with multiple Farbog Boneflinger doing work in conjunction with Undying Evil. However, there are a lot of common creatures with more than two toughness in this format, enough that Farbog Boneflinger probably isn’t the windmill slam that I first assumed it to be. I was dispatched in round 2 by some Hollowhenge Beast. This inspired my second draft…

(3-0) Hollowhenge Beast is the real deal. There are few cards that deal with it, and one of them (Burden of Guilt) currently is undervalued (I don’t think that I should be picking these up 13th pick). Wild Hunger similarly is undervalued. I won all three of my matches this draft on the back of Wild Hunger because it makes combat math incredibly difficult. Finally, as expected, Strangleroot Geist on turn 2 is one of the best plays in the formatâ€”originally I thought that he was slightly better than Highborn Ghoul, but he’s actually a lot better. There are simply too many ways to remove a one- or two-toughness creature in this format. I enjoyed playing R/G so much I did it again…

(3-0) Despite sharing two colors, this deck is very different from the last, using significantly more controlling elements (four copies of Fires of Undeath). While this let me breeze past my white- and blue-based opponents, my opponent in the finals had some very large green creatures, and it was only the strength of my rares (double Flayer of the Hatebound is incredibly unfair) that let me win the draft. This experience served to further emphasize the importance that the creatures we play have undying, have more than two toughness, or provide significant utility (e.g., Dawntreader Elk). Of course, I hadn’t learned this lesson yet because I proceeded to draft this…

(1-1) Experientially this was my weakest deck. Highborn Ghouls are quick and easy fodder for Forge[/author] Devil”][author name="Forge"]Forge[/author] Devil, Tragic Slip (non-Morbid), Fires of Undeath, and, most damningly, Warden of the Wall. While it’s possible to draft an aggressive R/B deck in triple DKA, this isn’t the way to go about it. I still wasn’t over Highborn Ghoul, though, because I tried them one last time… 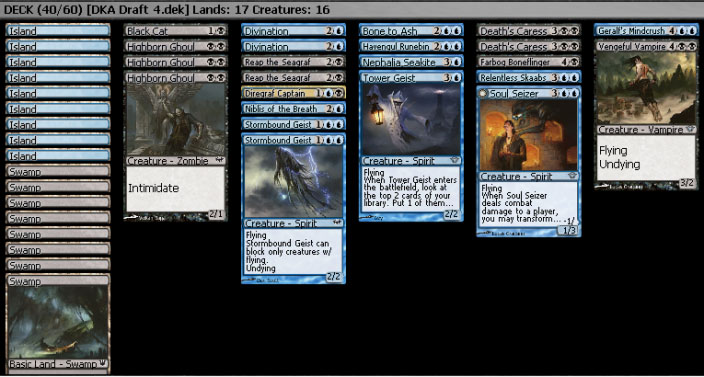 (1-1) This deck actually made a lot better use of Highborn Ghoul, with two ways to make them more substantial. In fact, I think that this may be the direction in which we want to take aggressive non-R/G decks in the format because Stormbound Geist is frustrating to remove if we’re aggressive and Death’s Caress can do what Farbog Boneflinger cannot: remove giant opposing monsters. I lost in the second round of this draft to a player with multiple on-color rares and mythics, and I don’t think that this was a 1-1 deck (probably 2-1). That having been said, I finally decided to keep the blue components that I liked and return to the green base…

(3-0) This deck simply did not feel fair. Rather, Feed the Pack did not feel fair. After having played this card, I think that it’s almost always a first pick (I haven’t seen how others have evaluated it yet, and it may be worse in the actual draft format rather than triple DKA). The ability to turn a Headless Skaab into six 2/2 creatures or to attack with a Stormbound Geist, turn it into two 2/2 wolves, and then have a 3/3 flyer is absolutely absurd. Aside from Alpha Brawl or a Ray of Revelation, there really isn’t any removal that can help our opponent regain traction if we get even the slightest bit ahead with Feed the Pack. In addition, having five cards at the four-casting-cost slot at instant speed each with significantly different modes made the deck very reactive and made combat a nightmare for my opponents. However, I was less than impressed with the Chant, and probably would bench it were I to play the deck again.

One thing that has always helped me when approaching a new format is simply to look at deck compositions and to match them to their records; this provides an idea of the synergies and combinations of cards that tend to work well, especially in a format like this one where specialized archetypes (e.g., Spider Spawning) are much less prevalent. As such, I hope that this broad overview has been useful!