Welcome back to another installment of Too Much Information! Our data-gathering has fallen a little bit behind the times at the office, but I’m working
to catch up. It’s tough to keep up with a tournament every weekend in addition to all of the normal tasks I have at Star City Games, so bear with me as
the metagame analysis continues. There have been some exciting developments since Washington, D.C., but you have to know where it all began before you
can understand what’s happened since. Washington, D.C. experienced a record-high number of players in the Standard Open, so the metagame was
particularly juicy. Click here for the full spreadsheet. 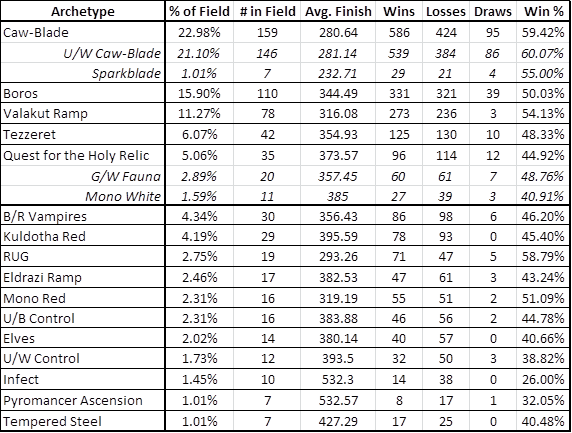 I don’t have a lot to say about this data set before diving in. The only truly peculiar thing is that players continue to not play RUG in spite of its
reasonably successful results. Kuldotha Red experienced a major dip following Indianapolis as a result of the Pro Tour in Paris, and Tezzeret has
become one of the more popular decks in the format. I cut off Tier 1 at 5% as usual, leaving a couple of former champions shivering in the cold. It’s a
Squadron Hawk’s format, boysâ€”respect.

The Open in D.C. marked the beginning of the splashing trend for Caw-Blade, wherein Gerry Thompson demonstrated that the Caw-Blade mana base could
afford a third color at the cost of Tectonic Edges. While this archetype and the U/W/B variety have since caught on, it wasn’t very popular early on
because only Gerry and a few friends were even playing it for the most part. Obviously, Gerry’s addition of red to the mana base earned him success at
this event, as he walked away with the first-place trophy.

The primary incentive to add a color is in an attempt to gain an edge in the mirror match, where Tectonic Edge is at its weakest, and spot removal is
at a premium. Cunning Sparkmage is especially strong, killing Squadron Hawk effectively while only earning a Day of Judgment as an answer, or a
particularly awkward Gideon Jura. A lesser-seen talent of the Sparkmage is his ability to pick up a Sword and run into combat with haste, but it can
come up. Edgar Flores, since an established Caw-Blade master, with multiple Standard Open Top 8s, has continued to defend the U/W core. He doesn’t
believe the splash makes up for the weakened mana base or the loss of Tectonic Edge in the Valakut and RUG matchups, and his result indicates that
there may be some merit to that decision.

Either way, Caw-Blade has demonstrated itself to be one of the winningest decks in the format, struggling only against hyper-aggressive decks where its
tempo elements risk falling short. Even then, the matchups are often acceptably close, which means you’d better have a good reason to not be playing
this deck.

Boros was the other big deck from PT Paris, and its popularity has soared after posting two Top 8 finishes in that event. Hero of Oxid Ridge has seen
widespread adoption, improving matchups against anything with Squadron Hawk and also providing an edge in matchups like Eldrazi Greenâ€”nice Plant
tokens! Boros has not fared well in these tournaments, as the aggressive deck is high variance and relatively easy to adapt to. The preponderance of
spot removal that results from players working to beat Caw-Blade is at its best in this matchup, and its equipment is taking similar splash damage.

When trying to beat the most popular deck will also give you a good Boros matchup completely by accident, it’s probably time to put the Steppe Lynxes
down. Boros does not look like a good choice for upcoming Open events, as Valakut Ramp is on the rise, and most of your better matchups occupy the
lower tiers.

Players walked into PT Paris gunning for Valakut, and they found their markâ€”the archetype was shot down in flames. Since then, their sights have
shifted to Caw-Blade, which has given Valakut space to reemerge. Spot removal is at its worst against the ramp deck, and players are literally
splashing Lightning Bolts into their decks. That makes it a good time to be casting Primeval Titan, and the archetype has experienced growing success
as it lumbers around in the Top 16 of most Opens.

Knowing your enemy goes a long way towards winning the match with Valakut, and finding the right configuration of sideboard slots is important. Acidic
Slime seems quite productive, and I’m personally a huge fan of Summoning Trap. So many decks are trying to fight you fair, and Green Sun’s Zenith is
not the best when Caw-Blade is packing Spell Pierces and Flashfreezes. The Trap gives you an additional ability to threaten the Titan and a subsequent
victory, so I’d anticipate seeing more of it in the coming months.

It’s not a surprise that the newest planeswalker to hit the scene has been so popular. Patrick Chapin and Martin Juza showed players two very different
ways to use the new guy on the block, and both have shown up over the past couple weeks. As a known quantity, the deck has suffered in the Swiss
rounds, and it hasn’t helped that all those ways to destroy Sword of Feast and Famine happen to be quite reasonable against Tezzeret as well.

The Tezzeret deck clearly lacks inevitably, as one can see by examining its win percentages above. It’s excellent at stabilizing and then crushing
aggressive opponents, but Caw-Blade and Valakut have been running over the archetype. The Kuldotha Forgemaster build has a significantly better Valakut
Ramp matchup, so you may want to start looking at that deck. Valakut has a difficult time beating a Mindslaver, especially when you can fetch it up as
early as turn 5. These decks are a lot of fun to operate, and players have only just begun to tap into Tezzeret’s potential.

Quest has been subsisting on Tier 2 for quite some time, but it’s slowly climbing the ranks in the Open Series. There are a number of noteworthy
reasons for its ascent. It appears to boast a reasonable Caw-Blade matchup on the back of its potent aggression and durability to Day of Judgment while
also accessing Disenchant effects and Squadron Hawks of its own. The deck is inexpensive, playing no blue planeswalkers or 6/6 Titans, which makes it
easy to assemble for most players. Plus, it’s just fun!

I like the G/W version the most. Quest can punish players for keeping weak hands quite well, and the fact that Caw-Blade players are relying on Divine
Offering means that the Quest itself can sit in play quite safe. Once the opponent taps out for Jace or Day of Judgment, you just pop and go thanks to
Stirring Wildwood. The G/W varieties can also access Vengevine, a very strong creature against the Caw-Blade strategy. I’m not in love with this deck,
but it’s worth keeping an eye on. Some technology developments or a new card in “Action” could easily put it among the contenders.

RUG posted a double finals finish in San Jose and has been championed by Alex Bertoncini, Ben Wienburg, and a handful of other players. It consistently
performs well in each Open Series, and yet its popularity continues to remain quite low. When Valakut switched to Green Sun’s Zenith en masse, I was
sure that RUG would finally vault into the upper levels, but that has yet to happen. Considering how soft U/W Caw-Blade is to a Lotus Cobra on the
playâ€”that is, they have stone zero ways to stop itâ€”I’m a bit confused.

RUG’s design has shifted in the past month, with Garruk Wildspeaker growing standard and the fatties becoming Precursor Golem and Inferno Titan. All of
these cards are excellent against Caw-Blade, with Garruk’s Overrun offering a surprising threat level for even a couple Cobras and a Ravine. It seems
like a fine time to be living the RUG life, but players don’t really seem to agree. Peculiar, isn’t it? I anticipate RUG rising, but that’s been true
for a few weeks now and has yet to be proven right.

We’ve all heard a great deal about Edison already, and by the time you read this, Memphis will be in the books. A Legacy update will be coming for you
sometime after Dallas or LA, while the next Standard update will have just Edison. I may combine Dallas and Memphis, depending on our time frame, but
that’s still uncertain. It’s a busy time to be in coverage, but I hope you guys are having fun following the Open Series around the country. At any
rate, see you this weekend in Dallas.

Tune into SCGLive to see Gavin Verhey and Joe Panuska bringing you the scoops and stories from the event floor, along with plenty of live matches! Make
sure to follow @ SCGLive for live Twitter updates from the floor.