This past weekend was an important weekend for Constructed Magic. StarCityGames.com held an Open Series event the first weekend that the new set was tournament legal, as it has for practically every new set since the inception of the Open Series. Standard (and occasionally Legacy) events tend to take their cues from this first Open Series event. This weekend’s event was in Nashville, and it was won by a deck with literally no cards from Born of the Gods.

Despite this, Born of the Gods still had a dramatic impact on the weekend. At #SCGNASH, one of the most immediate result was the rebirth of the Pack Rat debate. How many Pack Rats are correct to play in a Pack Rat deck? In the previous Standard, over time we moved from a de facto two Pack Rats to the full set of four Pack Rats. Pack Rat was simply so powerful that it could completely tilt a game out of control, but it could really only be punished for it by U/W Control in the form of Detention Sphere and Supreme Verdict (at least if we are talking about mainstream decks).

And so while the debate about the Rat remained unresolved in Nashville, there was another event over the weekend that featured a player who perhaps has strong opinions on the question. This other event was the Super Sunday Series Championship at Wizards of the Coast headquarters, and it was won by none other than Owen Turtenwald, who as we all know has really been rocking the Pack Rats.

The Super Sunday Series is really pretty remarkable. At each of the 2013 Grand Prix in the US, a Sunday tournament was held, with the winner receiving an invitation to play at Wizards of the Coast headquarters for a share of $20,000. First place was $6,000, but what is really remarkable is that all of the players who attended received airfare and meals paid for. With less than forty players playing for $20,000, if you’re only concerned with the “value” of the event, it’s a pretty incredible one. If you’re going to, say, Grand Prix Richmond, there will be a Super Sunday Series Qualifier on Sunday, and you can attend the 2015 Sunday Super Series Championship if you win it. I was already thinking about Richmond, but this event has me thinking about it even more.

While I wasn’t able to attend the event this year and fought it out instead in Nashville, I heard that it was a total blast for the players. I wanted to share one of the most impressive comments the tournament organizer, Alan Hochman, received about the event: “You guys are doing something incredible, and this is the most amazing weekend of Magic any of us have ever had.” My old friend Roberto Gonzales (of Bow Tie Mafia fame) attended the event, and he had this to say: “The energy and effort that the organizers put into the tournament was amazing. If every Magic tournament was run this way, I’d never leave the tournament site.”

Hearing something like that, I know I’ve sometimes skipped the Super Sunday Series Qualifiers at Grand Prix where I’m not playing in day 2, but I don’t think I’m going to make that mistake again! Of course, when you’re playing in a 40-ish person tournament for $20K, it really is the kind of event that is unlike the experiences that very nearly all of us have ever had.

Owen Turtenwald’s win of that invitational event is where I want to begin, particularly since he is practically Willard. 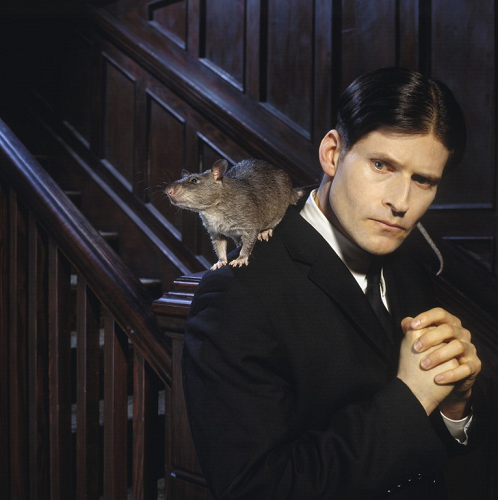 Owen won the first Super Sunday Series Championship, playing Mono-Black Devotion in the Standard portion of the event. That being said, the event included multiple formats (Theros/Born of the Gods Draft and Standard), and the Top 8 was Modern Masters Draft, so even though Owen was the winner of the event we can’t infer too much about whether or not Mono-Black Devotion is the best deck or not. (Though obviously the real best deck is my U/W Control deck, right?)

Gone are the Pharika’s Cures and reduced are the Devour Fleshes. The big reason why is the inclusion of this block of cards:

The biggest thing worthy of note in my opinion though is that Owen decided that four Pack Rats is still the way to go. Bile Blight has been a big part of the argument about why the deck needs to drop its Pack Rat count. The essential argument basically works like this: Pack Rat is a liability against U/W Control, but in the other matchups it can be a devastating part of a game; now that it can be a liability against black decks of all stripes (but particularly Mono-Black Devotion), you have “two-thirds” of the metagame where it isn’t optimal. Thus you should cut the count to a more conservative amount.

Now, for my part, I do have some minor questions about the deck. While I think that the main four Rats makes sense, I’m not a hundred percent sold on the number of Temples in the deck. I find myself wondering if the proper number is two (like played by Brian Braun-Duin in his Grand Prix Louisville championship deck) or three or even five or six. My gut says five, but I haven’t tested it yet. I’d be curious to hear from anyone who has tried to push this envelop.

That is a minor quibble. There’s a much bigger thing to think about though. I’ve already touched upon the fact that while Owen won the event he won the Top 8 through his Modern Masters drafting skills. Mixed formats are hard to decipher when it comes to figuring out what decks actually did well. A big part of this is that even if you isolate only the Standard (or whichever) portion you can’t really know how well decks are performing because some players might have simply had weaker resistance or stronger resistance than their records indicate because the initial seeding of the format is not tied directly to the performance of that deck but rather that player and this mismatch is compounded round after round.

That said, you can still be better served by looking at the isolated results of a format rather than the comprehensive results. In so doing, here is your “Standard Top 8” from the Sunday Super Series Championship:

That is five, count ’em, five Pack Rat decks. And they are all running four Pack Rats. Even more remarkable, though, is this: there were only three B/W Midrange decks in the event (alternately called Orzhov Midrange and Orzhov Control in the coverage), and they all were in the Top 8 finishers of the event. Even with an event so small, that is quite remarkable.

Especially when we take note of the two B/W decks in Nashville, this strikes me as a really big deal. In Nashville, I didn’t see that many B/W decks, but they still floated to the top. So what do these decks look like?

As I was looking at these decks, I was struck by the similarity of them to the Orzhov deck that I worked with Collin La Fleur on that I gave to my friend Jonathan Brostoff for #SCGMKE late last year. While the list I gave him was certainly much rougher than these lists and he didn’t do the blue splash that I love in the deck, the major ideas of these decks are basically the same: Blood Baron of Vizkopa can be absurd, so take advantage of that.

The Pack Rat memo had not yet been fully received by anyone at that point. Currently, in looking at these lists, I’m sure I’d have to make room for a combination of four Pack Rats and four Mutavaults, but the other concepts of the deck certainly ring out. One of the interesting things about these lists is that they tend to share a lot of minor points in common: ten to twelve removal spells, about fifteen threats, and good access to card advantage. 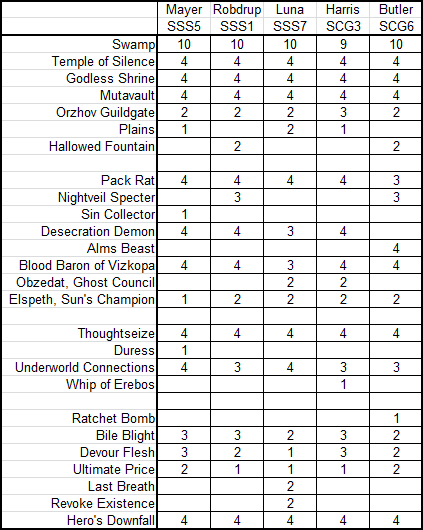 If we take a look at the Underworld Connections, for example, we can see that when people chose not to run four they found another slot to explicitly be card advantage. In Harris’ deck we see a Whip of Obzedat, and Butler and Robdrup run three Nightveil Specters.

If we take that extra step and make an amalgamation of all of these successful decks, we could get a great “generic” deck to work with. About five years ago, I wrote an article about how to create what I called “amalgamated” decklists; I still think it is a great tool for finding a successful deck. This is different than merely making an “average” decklist by adding all the numbers together, dividing, and going on from there. To make an amalgamated decklist, you need to see what they’re doing and follow through on those decisions so that you don’t end up destroying the needs of the deck through “rounding errors.”

Finishing this process would give us the following deck:

This deck to me looks like it would be able to be played in a Magic tournament right now and perform very well. Now, there are many things about this deck that I actually don’t like. If you ask me, this deck should look at Owen Turtenwald’s list and copy some of the ideas that clearly work from it. Thus my build would make use of 4 Nightveil Specter and a 4 Bile Blight / 2 Devour Flesh split for example. I do however agree with the move slightly away from Underworld Connections, a card that has continually underwhelmed me and that even Owen has claimed numerous times he doesn’t care for.

My own version, inspired by the amalgamated list and my own list from the past, would probably also be a bit more aggressive with the mana and just completely cut Underworld Connections (crazy, I know) and look something like this:

While I definitely don’t think that B/W Midrange is a wildly different archetype than Mono-Black Devotion, at least at its core, I do think that it approaches the “mirror” a little differently. As Mono-Black Devotion seems unlikely to go away soon, adjusting to B/W is a real option. How will your deck adapt to deal with four maindeck Blood Baron of Vizkopas in an incredibly powerful deck in the new metagame? Answering that question is something that all decks are going to have to think about moving forward.