The Season Two Invitational of the Open Series is in Columbus, Ohio this weekend, and it’s clear that there’s a new top dog:

Chris VanMeter’s dominance in the recent Opens has led to an invite to the Players’ Championship and has even gained a reluctant endorsement by Brad Nelson himself. It’s powerful,
full of mythics, and has a great proactive game. It’s tough to sideboard against and attacks on multiple axes between the efficient creatures and the
planeswalkers. It has good removal with Mizzium Mortars and Dreadbore and has card advantage in Courser of Kruphix, planeswalkers, and Rakdos’s Return.

How do you beat this monster? Well the manabase has a ton of shock lands to ensure their starting life total isn’t exactly 20; more so around the 14-16
range. You need something to punish such frivolous use of their precious life. Jund of all ages has had the flaw of being weak to the extremes of
hyper-aggression and full-blown control

Even if it’s only decent against the best deck, it’s great against the decks that beat the best deck, which I believe will be a resurgence of
Mono-Black Devotion like Todd Anderson advocates and Sphinx’s Revelation style control. The Invitational is a big enough
event to have a leveling game (for those who’ve played Werewolf). For every tournament, there will be a best deck and people will come with ways to beat
it. Sometimes, it’s a clear Rock-Paper-Scissors. Here, I believe that people will try to go over the top of each other, leaving an open window for
hyper-aggression to take over.

Boss Sligh is a good deck for big tournaments. People play scared and want to be in control of their destiny. They know that extreme aggro exists and will
give up percentages to those archetypes in hopes to play good Magic against the field in the long run. I’ve played the R/G version at the StarCityGames
Invitationals in Las Vegas and Charlotte to reasonable success and see myself sticking to what works in the future.

So a little bit on the card choices….

Blinding Flare has been a nice one, doing most of the work that Seismic Stomp did in the past. If they only have one blocker, it’s better. What pushes it
over the top is the ability to cast it on Akroan Crusader for a 1/1 haste Soldier token making the card less situational. The ability to create pressure
while enabling an attack has been awesome for me.

This build goes back to the roots of twenty one-drops and three sweet Rubblebelt Maakas to make blocking a nightmare. Courser of Kruphix is everywhere with
the rise of Jund Monsters and Junk Constellation. Busting through high toughness creatures is at a premium. The Rubblebelt Maakas compliment the full set
of Legion Loyalists well. But what are Legion Loyalists really good against? Master of Waves tokens.

Mono-Blue Devotion has been a rival of mine, and I’m happy to be well-suited to fight them off this time. Even without green and Skylashers, this build has
been plowing through countless Frostburn Weirds and Nightveil Specters in testing. What looks like a terrible matchup on paper has turned out to be pretty
good, especially if they now have to worry about Jund Monsters more.

I anticipate that the solution to a metagame of those decks will be U/W Sphinx’s Revelation decks that include Esper. If all goes as planned, then Boss
Sligh is in a prime position to go under everybody. If they’re cutting Detention Spheres and running Planar Cleansing, I can’t jump high enough for joy.

M15 Spoilers have come out and two cards in particular so far stick out to me to impact standard. Patrick Chapin addressed the how the Avatars will change the game but I’m more focused on the cheaper
cards. 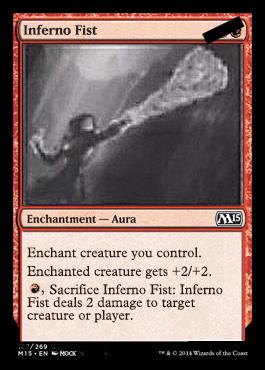 I’ve heard everything from this costing R and 1R and from and the power and toughness bonus being anything from +2/+0, +2/+1, and +2/+2. At its best and
cheapest it’s outright amazing. Depending on its true stats, this could be a big player in Boss Sligh reducing the need to play reach cards like Shock or
Lightning Strike as much.

3 Eidolon of the Great Revel

I’ve seen some people jamming Thunderous Might as a conditionally more powerful Madcap Skills. The card never did enough in my eyes and the upside of
giving +4/+0 or more never seemed to work out in practice. Inferno Fist will provide most of the same function while having additional utility.

Check it out on a creature with first strike. On an Ash Zealot, we can attack into Desecration Demon and sacrifice the Inferno Fist after first strike
damage if they choose to block. With Legion Loyalist, a shock after first strike damage has resolved will make blocking impossibly difficult to calculate.
Fortunately for you, the answer is typically easy – just jam with everybody and see what they do.

Mono-Black Control has been seeing less play lately. Maybe it’s because it didn’t gain much from Journey into Nyx or that the metagame has solved its
oppression, but overwhelming Pack Rat kills are at an all-time low in months. Maybe finally in M15, we’ll see this gem give it a push: 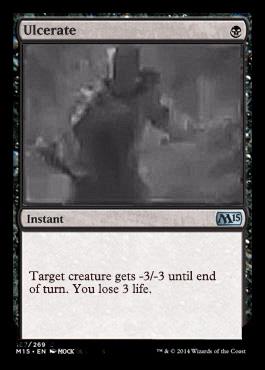 Vendetta saw its share of play back in the day, and this looks rather similar at first glance. A one-mana removal spell has been something that Mono-Black
Devotion has wanted for a while. Something like Disfigure or Dead Weight has been sorely missing from Standard. I myself went so far as to try M14’s Wring
Flesh in my quest to fight aggro more effectively.

Ulcerate comes with a hefty cost. Three life can suck when you’re getting beaten down, especially if R/W Burn is still a thing comes that time. Ulcerating
a Chandra’s Phoenix for example might just give you pains in your own stomach.

It really depends on the number of Nightveil Specters still running around. Bile Blight is great at getting the occasional 2-for-1 and clearing a swarm of
Elspeth tokens, but its main appeal is that it’s a 2-drop removal spell that could get the flying 2/3 in mirror matches.

3 Staff of the Death Magus

I remember after my first break from Magic, I came back to playing around 2005. I saw a Murray “The Mauler” Evans token in a booster pack of Mirrodin. I
played with the guy, as a peer, on the same Magic Online team so long ago. I wanted to get good enough to have a token in a booster pack… or to win a Magic
Invitational and get to design my very own card.

Then they discontinued the Invitational.

The StarCityGames Invitational series has been my chance to complete a dream of mine. I came up short in Charlotte, losing to Jessy Hefner’s RUG Delver in
the quarterfinals while piloting Infect. In the pre-match interview, they asked if I had put any thought into what token I would make. I had put months
(perhaps years) of thought into it. I wanted a token that represented the archetypes that I embraced, either the 1/1 red Soldier token that Akroan Crusader
makes or to break the mold with a poison counter, which hasn’t been seen since Scars of Mirrodin block. For me, the immortalizing token was a bigger deal
than the money, or even the Players’ Championship invite. For me, it’s something better than any trophy or any short-term headline can offer.

I’m excited for the Columbus Invitational this weekend. It’s a pleasant surprise that it’s at Origins this year, an event I’ve never had the privilege to
attend. In fact, the only gaming convention I’ve ever made was GenCon which was an absolute blast, and I’m looking forward to seeing what all the fuss is
about at this one!