Last time we met, I was pretty hyped on Jund Aggro. It’s a few weeks later and I’m still sure that it’s the deck that you want to be playing. While the broader results for the deck have not been stellar, I believe that has a lot to do with how few people are playing it. You are doing some of the most powerful things in the format and doing all of them by turn five. Tragic Slip has fallen off the map due to the rise of Strangleroot Geist and Voice of Resurgence. Everyone has turned many of their Tragic Slips into Pillar of Flames, which makes an Aristocrat very happy.

Domri Rade is one of the best planeswalkers in the format. I was originally skeptical, as a deck like Jund Aggro playing around 28 creatures can miss a lot on the +1 ability. I soon discovered that you almost don’t even care. It hits a creature a large amount of the time, and in a lot of matchups the ultimate is unbeatable and not that hard to achieve.

A common win condition against Junk Reanimator is to put them on the back foot and just keep ticking up a Domri Rade from turn three onward. If they try to send creatures into it to keep it in check, they risk taking large chunks of damage from your creatures. Against control, Domri can slip under counterspells and bury your opponent in card advantage.

Don’t underestimate Domri’s versatility though. It is also a decent card versus many of the aggressive decks. You can use Rampagers and Flinthoof Boars to fight mana dorks, Burning-Tree Emissaries, and other small creatures that are bothering you.

The hardest decision I’ve had as far as the deck is deciding on what variant of the deck I want to play. There are really three major variants that have stood out to me. The first is similar to the list that I featured two weeks ago:

The big distinction in this list is the choice of Gyre Sage and Borderland Ranger. In my opinion, both of those cards are the worst non-land cards in the deck. Borderland Ranger really does its job well and is an important role-player in this list, but three mana for a 2/2 is a really bad rate. Gyre Sage allows for some awesome starts involving turn-two Gyre Sage, turn-three Burning-Tree Emissary plus a four drop, but it is generally clunky and any game where you draw two leaves you with a pretty much dead card in hand. Even in games where it’s doing his best Tarmogoyf impressions, it can be easily outclassed by creatures like Thragtusk.

Since I’m not playing Bonfire of the Damned, which I’ll get to later, the ramp usually matters very little. It does help to have a little extra mana laying around from time to time, but Gyre Sage is just clunky and inconsistent. One last point about this list is that playing Borderland Ranger essentially requires you to play a basic Swamp which is by far the worst card in the deck.

The other lists eschew the two bad cards in order to use things like Farseek. While I believe Farseek to be amazing on its own, it really just didn’t mesh with the deck well. I’ll talk a bit more about Farseek once I show you the other lists. Next up is the list that Brian Kibler and friends played at Grand Prix: Miami.

William Jensen moneyed with the list at Grand Prix: Miami, putting up a solid showing. Brian said both on my Facebook and in his article that the list was insane, but a lot of losses came from his poor play. The big differences in this list were the removal of the bad cards I spoke about to make room for Farseek and Strangleroot Geist. He also cut Burning-Tree Emissary, as once you cut Gyre Sage the Emissaries becomes much worse. Huntmaster of the Fells also took the place of Ghor-Clan Rampager.

Moving on, Strangleroot Geist is a fantastic card, but we never really had room in the manabase to support it effectively. Turn-three Huntmaster of the Fells is also an amazing play that this deck can make, making better use of the ramp. Turn-three Ghor-Clan Rampager is awesome, but certainly less insane than Huntmaster. This list seems to have less punching power because of Huntmaster being so fragile, but has a lot more staying power. Huntmaster also makes stabilizing against the quicker aggro decks much easier.

This list also plays Bonfire of the Damned, which my other lists don’t. I have always been on the fence between Bonfire and Mizzium Mortars. I have a few big reasons that lead me back to Mizzium Mortars though. The first is that I seem to non-Miracle Bonfire on turns one and two way too often. It’s probably just me being results-oriented, but it does happen a lot when I play the card. It also does very little in a lot of the games where you don’t Miracle it. Sometimes a Bonfire for two is all you need, but a lot of the time you want to kill X/3’s and X/4’s. The direct damage from Bonfire of the Damned can be nice, but it is just too inconsistent for my taste.

Finally, here is the hybrid list that I put together:

I played a bunch of games with Kibler’s list, but it really lacked the explosiveness that I wanted from the deck. Without it, you’re just a much slower aggro deck and a much worse midrange deck. The only reason I liked the list were available in any of the lists: Falkenrath Aristocrat and Thundermaw Hellite.

This list tried to keep the explosiveness by cutting the Strangleroot Geists for Burning-Tree Emissaries. Turn-two Emissary into Farseek sounded way too good to pass up. I originally tried to keep the Huntmasters, but after a while they got weeded back out of the list. Ghor-Clan Rampager just gave the deck too much punch and we couldn’t afford too many expensive spells. Varolz, the Scar-Striped was a card I liked, but like Huntmaster he just didn’t pack enough power up-front. He was one of the last to go though.

After playing with both this list and Kibler’s list for a while, I was divided on Farseek. The card was so powerful and consistent in what it did, but it just never felt like it meshed well. Nothing felt cohesive when I was playing with the card.

I knew Anthony was going to be going to the StayCityGames.Com Open in Worcester, and we talked nonstop about the deck. He was at the same point I was with Farseek and in the end decided to switch back to the original list last minute. He started off 7-1, but unfortunately fell off towards the end and ended 7-3 on the day. 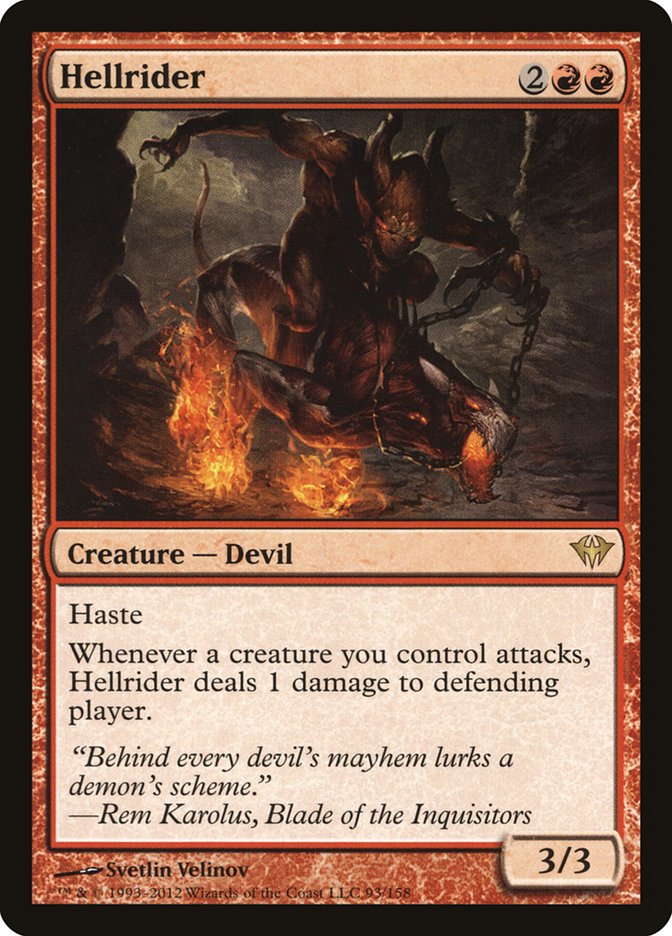 One big thing from his event is that he said Hellrider was the best sideboard card all day. It was a little piece of tech I resurrected not too long ago. The reasoning behind it is that in a lot of your matchups, one of your four-drops is pretty mediocre. Falkenrath Aristocrat is bad versus Junk Reanimator, for example, and Ghor-Clan Rampager is bad versus control decks without Restoration Angel. The problem is that you rarely want to go below seven four-drops. Hellrider is less powerful but more versatile and fills the holes well. There are even matchups where you want to just play all eleven four-drops and jam, like UWR Flash.

While M14 is on its way to the shelves, I still think this deck is a competitive and viable choice. If I had a Standard tournament tomorrow, it is very likely that I would be on the first list I showed you. Before we finish for today, I want to talk about some ideas I have for M14 Standard. While I don’t think that the set is going to completely destroy the format, it does have some interesting cards. Most notably, Doom Blade, Young Pyromancer, the new Slivers, and Gladecover Scout.

Doom Blade is an interesting card that I think might be a go-to removal spell in Standard for a while. There aren’t too many unbeatable black creatures running around right now, and at that rate it may be more versatile than a lot of the two-drop instant speed removal running around. By the way, Falkenrath Aristocrat loves a Doom Blade. The StarCityGames.com Invitational in New Jersey is happening soon and I need to figure out something to play. The first things I want to look at are Jund Aggro and Jund Midrange, as I have the most experience with those. I’ll be trying out Doom Blade in the removal slots and seeing how it goes.

Young Pyromancer is not as good as the hype makes him seem. It’s not that the card itself isn’t awesome, but I just don’t see much of a viable home for him. Nonetheless, I decided to throw together some “Standard Storm” lists involving the card. While none of the lists have really come to where I want them yet, it is certainly something to look at.

Young Pyromancer loves singing himself a Battle Hymn, and Beck//Call is no slouch. In these decks, Burn at the Stake is the standard win condition. I would look towards RUG lists involving the aforementioned cards as well as maybe Young Wolf and Burning-Tree Emissary. A more token-oriented list with white instead of green could also be another direction to take the deck.

I threw together a Naya Slivers list that tries to start off with a couple of the good small creatures, hopefully including Manaweft Sliver which is super insane. Then you try to close out the game with a big creature such as Bonescythe Sliver, Thorncaster Sliver, or Megantic Sliver. I also included Bonfire of the Damned, because you can beat big creatures but you need the small chump blockers out of the way. Mutavault also allows you to play more lands without losing some aggressive potential. Here is where I’m at with the list now, but keep in mind that this is with little testing or experience.

Finally, an idea my friends and I have been talking about is an update to Bant Hexproof. I’m not sure exactly what new cards the deck wants though. Gladecover Scout may have hexproof, but it just might not be powerful enough. Witchstalker is another interesting card, but I’m not sure how often it will be anything but a-three mana 3/3 with hexproof. That may still be good enough, though; I always hated Loxodon Smiter in the deck, and as long as the deck can support double green, Witchstalker may have a place.

That’s all I have for this week. If you have any ideas for some competitive decks after M14 roles out, I’d love to see them. While I don’t think the format will change drastically, it will definitely add some cool new toys to the format. I look forward to the invitational and hopefully I do better than I usually do. If you’re going, see you there!