Today’s article comes from a chat I had with a reader who wrote in. (I like hearing from you @jdbeety on Twitter and in my Facebook comments. Talk to me!) He was curious about the minor (two-color) gods of Theros and whether I thought they were underrepresented in the sets released so far.

I had the opposite opinion and think Wizards has done a good job of making sure the minor gods are represented. That said, the minor gods have received varying levels of recognition, and some remain almost complete mysteries. My goal is to bring together the publicly available information about the minor gods of Theros and give a bit of commentary on each.

A Brief Note On The Major Gods

They are the five major gods with major functions, one for each color. (For a full breakdown, check out Part 1 of the “Planeswalker’s Guide to Theros.”) Two-thirds of the way through Theros block most of them have name recognition. There is an imbalance however in the level of recognition.

This works on multiple axes, including that of storyline (Vorthos) and tournament play (Spike). Suppose I were to walk around a StarCityGames.com Standard Open and ask the competitors “in Theros, who is the god of the sea?” Most would reply “Thassa.” Her card is much used in blue-based devotion decks, and players are used to hearing her name.

In Vorthos terms however Thassa is relatively unimportant to the storyline except for the planeswalker Kiora doing her best Thassa impersonation. Heliod, who’s recruited Elspeth for his own purposes, is far more significant to the core narrative of Theros block. 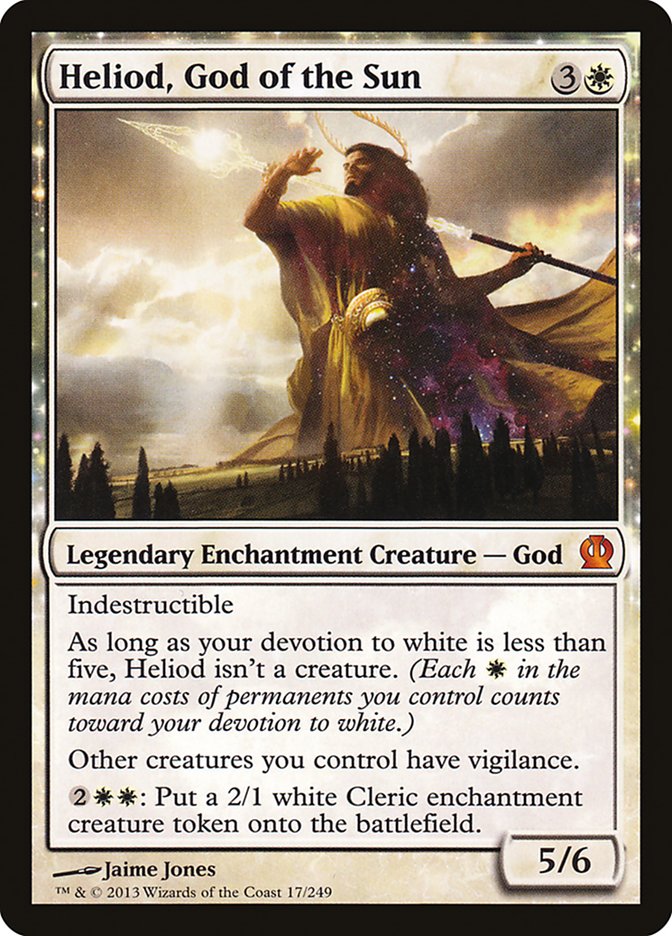 Said narrative involves the newest minor god of Theros, one who made a rather rude entrance to the pantheon.

Xenagos, God of Revels, the R/G god introduced as the planeswalker Xenagos, the Reveler, discovered that on other planes the gods of Theros hold no sway. What’s a disillusioned satyr to do? Cook up a series of magic rituals that will culminate in his ascension to godhood, that’s what.

Xenagos is the block’s antagonist, but as Doug Beyer has pointed out, he’s not just a straw villain. He’s trying to destroy a corrupt and dangerous ruling system, a narrative found within the Greek pantheon; the king of the gods, Zeus, overthrew his father Cronus, who had devoured Zeus’ siblings to try to get rid of any potential usurpers.

Xenagos also wants to make Theros his proverbial ashtray, which is also in line with the Greek pantheon, as Zeus would do whatever and whomever he liked.

Xenagos appears on Fanatic of Xenagos as well as the two cards given above, and he’s quoted on Annul, Destructive Revelry, and Reckless Reveler. He’s mentioned in the flavor text of Mischief and Mayhem, where Elspeth says mean things about him. His is a Temple of Abandon, and he won’t stop until Theros is one big squicky party or another planeswalker takes him down. Get your snacks ready.

Karametra, God of Harvests is the G/W god. (Like the rest of the non-Xenagos allied-color minor gods, she’s covered in “The Gods of Born of the Gods” on Daily MTG.) She’s also one of the most visible minor gods in the cards of Theros and Born of the Gods, as she is the protector deity of Setessa, one of the major cities of the plane.

She has three named cards with her eponymous mythic, Karametra’s Acolyte, and Karametra’s Favor. She also is referenced in the flavor text for Bronze Sable, Reap What Is Sown, and Setessan Battle Priest. More indirect references include the name Skyreaping, which evokes the harvest.

Karametra is the calm side of civilization, but as “The Gods of Born of the Gods” notes, “she is not a pacifist.” She’s also the mama bear defending her cubs, and an aggressor who forgets that could make a fatal mistake. 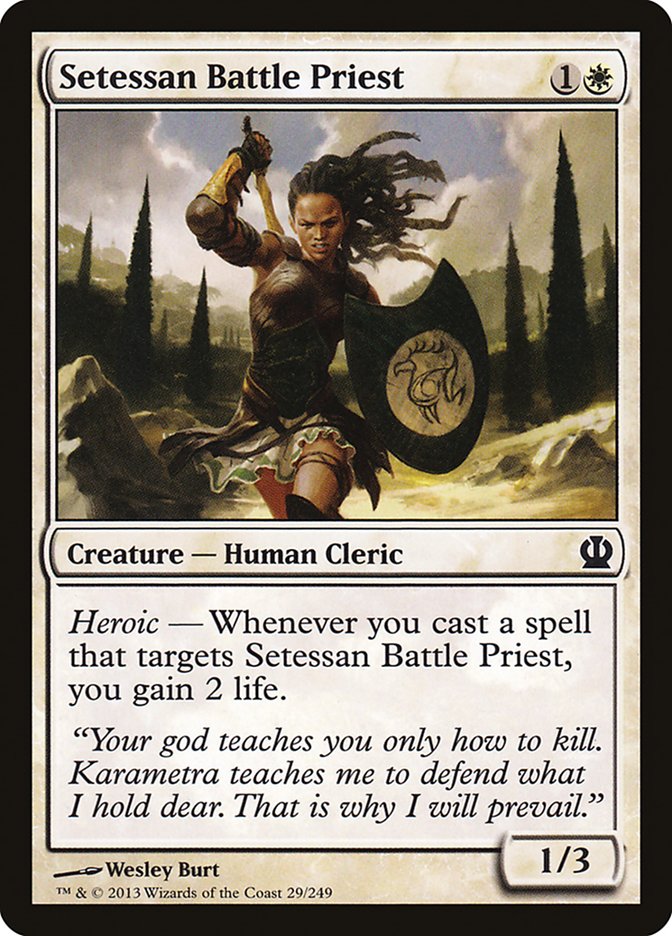 Ephara, God of the Polis is the W/U god. As with many other manifestations of white and blue mana together (the Alara shards of Bant and Esper, the Azorius guild on Ravnica), she is a force of civilization.

Unlike Karametra, Ephara’s blue side is progressive rather than harmonious. The city where she is most revered, Meletis, is famed for its philosophers rather than its agriculture.

In addition to her mythic rare, Ephara’s Enlightenment, Ephara’s Radiance, and Ephara’s Warden take her name in their own. No flavor text directly adds to Ephara’s “count,” though she appears prominently on the pediment of the Temple of Enlightenment.

Phenax, God of Deception is the U/B god and one of the less talked about deities in the pantheon. That’s probably just how Phenax likes it because he’s (per Daily MTG) “the god of cheats and liars” and an all-around unsavory immortal.

Phenax’s appearance is interesting to me. He wears a gold mask like the Returned who “cheat” the death god Erebos by slipping out of the Underworld and away from his control. Based on the flavor text for Black Oak of Odunos, Phenax and Erebos aren’t exactly best buddies. 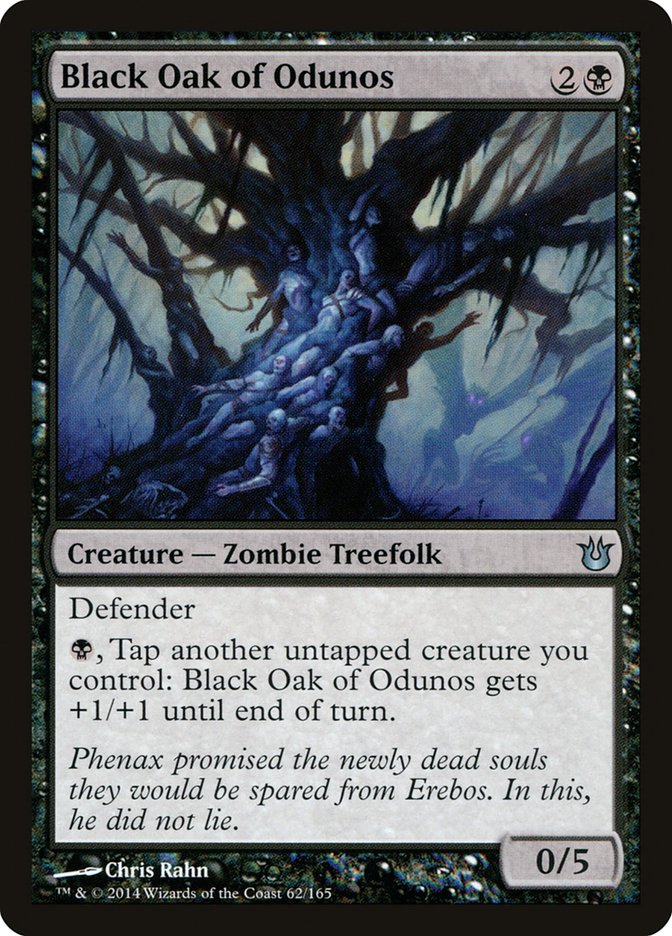 “In this, he did not lie.” What a magnificent jerk.

Beyond that flavor text reference, Phenax appears only on his own card and in the name of Disciple of Phenax. So far he’s been quiet. Will he have a final trick up his sleeve in Journey into Nyx?

Mogis, God of Slaughter is the B/R god and the last of the allied-color gods. While Mogis looks like a minotaur, the minotaurs themselves would have been unable to dream him up as a deity; to put it simply, they aren’t smart enough.

Once humans and other sapient species dreamed up a minotaur god of the sick side of war, though, the minotaurs adopted Mogis as their god of choice, and Mogis in turn adopted the minotaurs.

Most of the gods of Theros aren’t considered family relations, unlike the Greek pantheon, but Mogis has been described specifically as the twin brother of the other war god of Theros, Iroas. There’s no brotherly love lost between the two, as talked about at the end of “The Walls of Akros.”

As far as titles go, Mogis is named on his mythic as well as Fanatic of Mogis, Mogis’s Marauder (notably a Human and not a Minotaur), and Warchanter of Mogis. Two Theros cards, Borderland Minotaur and Deathbellow Raider, refer to Mogis in their flavor texts as well. Six cards for Mogis may seem like a lot compared to most of the other minor gods, but having an entire species to himself helps.

None of these gods have had their God cards released yet, but they have been mentioned on other cards. Even so, they remain more mysterious than their counterparts with official biographies.

Iroas is a victory god of sorts, aligned with the W/R color combination if Priest of Iroas is any indication. This would go along with the Akroan king Anax’s orientation toward the same colors, and he is (or at least was) a devotee of the god of victory.

It’s also worth noting that with the exception of W/B each color combination including white has a patron deity of a particular city: blue for Meletis, red for Akros, and green for Setessa.

The twin brother of Mogis, as noted above, Iroas also has a half-beast form, that of the centaur, which can be seen clearly on both the Priest of Iroas and the Hero of Iroas. These are the only two cards that incorporate his name in theirs, though Arena Athlete mentions him in its flavor text for a total of three cards. 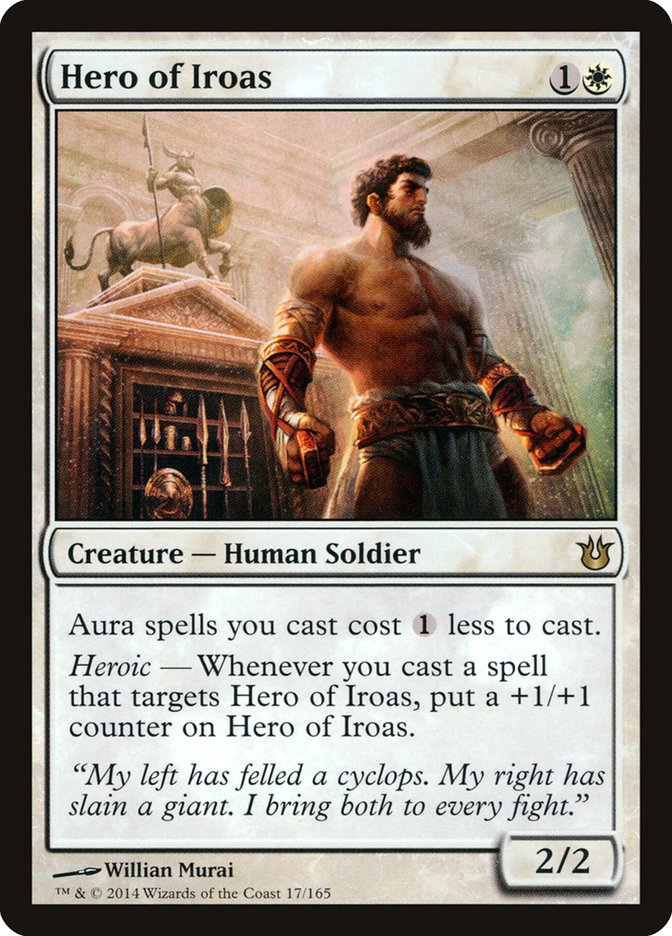 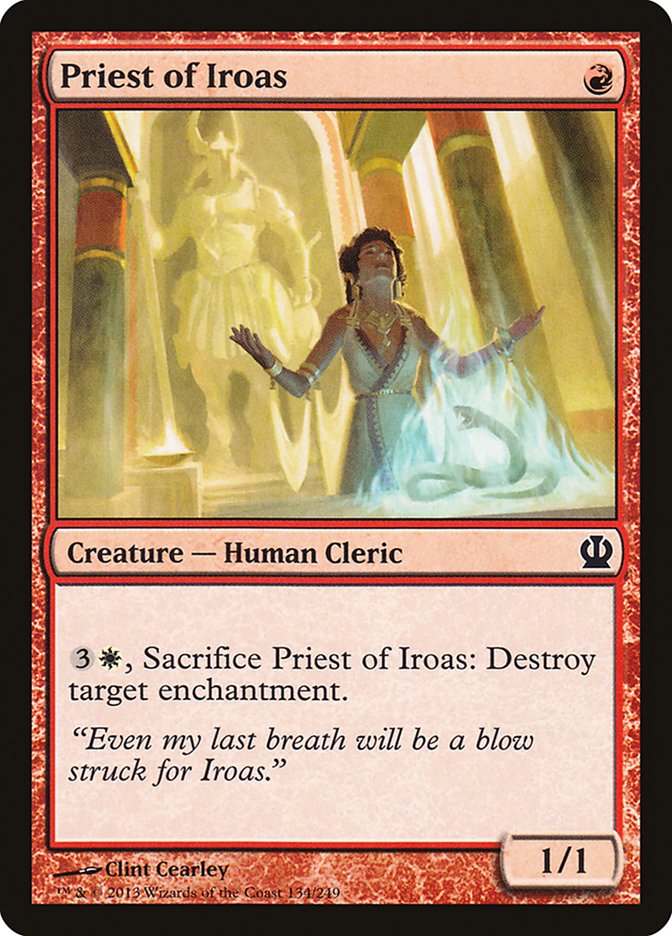 Keranos, the U/R god, could have many epithets attached to him. He seems at once to be a god of lightning and prophecy; on Bolt of Keranos he is described as the “god of epiphany.” In Akros, Queen Cymede is a devotee of Keranos and serves as the brains to Anax’s brawn in the royal power couple, though she’s pretty good with a weapon herself.

Bolt of Keranos and Stormcaller of Keranos use his name. Three more cards reference him in their flavor text: Divination, Lightning Strike, and Steam Augury.

Unlike Iroas, the full form of Keranos is unknown. Lightning Strike gives the most complete portrait of him, confirming he is male and depicting his arm as a storm cloud. Fickle even by the gods’ standards, Keranos will be an interesting deity to watch when Journey into Nyx rolls around.

Kruphix, who seems to be the U/G god based on his related cards, is enigmatic. Judging by Courser of Kruphix and Prophet of Kruphix, he seems to have connections to both nature and time, yet he is not an experimenter in the mode of the Simic of Ravnica.

Agent of Horizons, a green Human Rogue (quite the unusual combination), mentions his acolytes traveling along the delicate patterns of the forest. There’s a whole lot going on with Kruphix, but he doesn’t seem to have a single defining feature yet. Perhaps Journey into Nyx will offer some clarity. 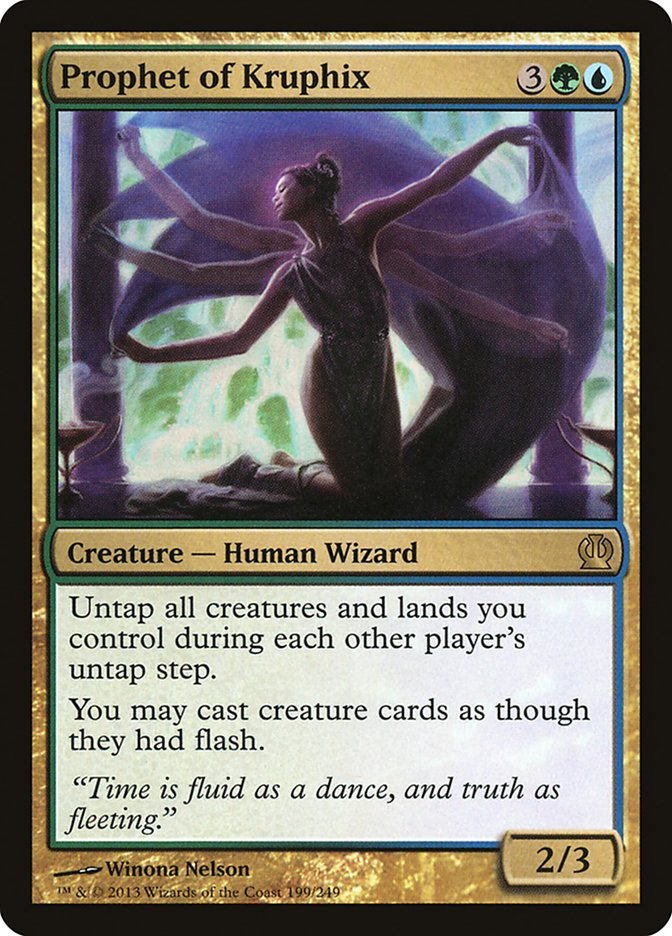 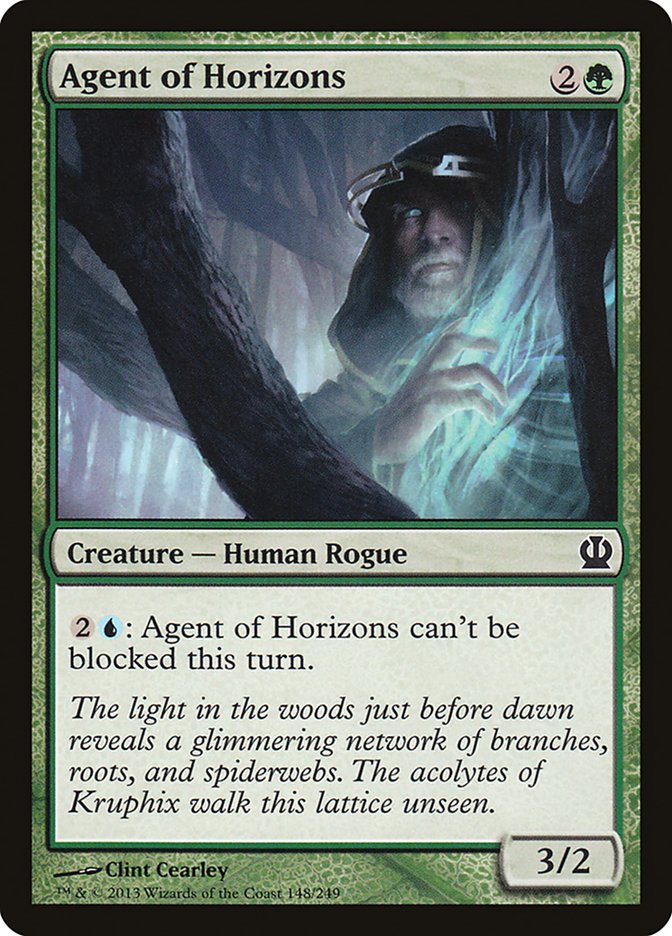 Pharika, the G/B god, presides over medicine and poison. This may seem like a contradiction until one remembers that many substances are medicines in small doses and poison in large doses or when used incorrectly, such as digitoxin.

So far Pharika’s biggest impact hasn’t been on Magic cards, but rather on its beyond the cardboard storyline. In Jenna Helland’s story “The Lost Confession,” when Elspeth planeswalks away from New Phyrexia, she lands on Theros, a plane she’d visited before, close to a temple of Pharika staffed with snake-loving healer priests.

The two cards with Pharika in their names, Pharika’s Cure and Pharika’s Mender, mention that knife edge between medicine and poison. Three more cards reference Pharika in their flavor text. Asphyxiate and Necrobite are straightforward, while Viper’s Kiss shows Aescalos to be the deadpan snarker of the plane, the Theran answer to Jaya Ballard.

Athreos is the W/B god, at once the least and most mysterious of all the minor deities of Theros. His name appears on only one card, Scholar of Athreos, and counting flavor text adds only one other, Sentry of the Underworld. Between them though Athreos’ function comes through clearly. 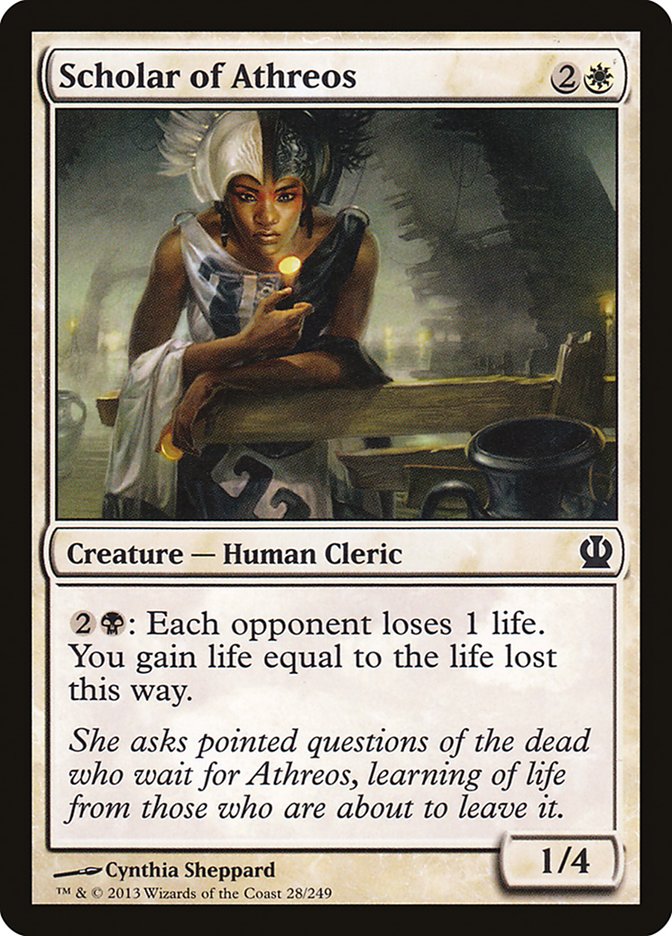 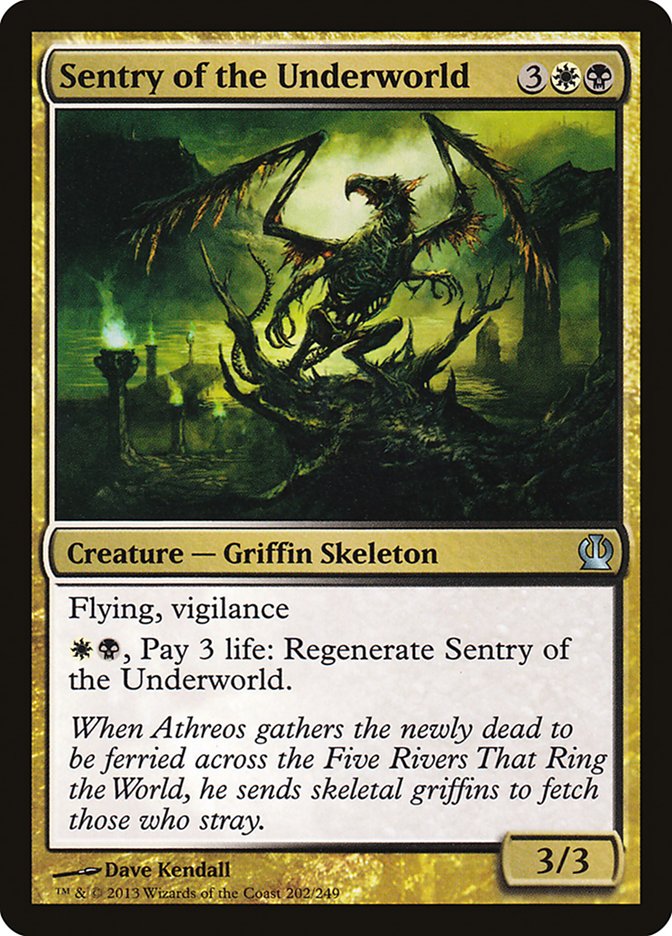 At first blush Athreos seems a dead ringer for Charon, the ferryman of the Underworld in Greek mythology. That said, no other minor deity is an exact replica of its Greek inspiration. As with other enemy-color divinities, it falls to Journey into Nyx to fill in some blanks.

Children Of A Minor God

Which of the minor deities of Theros is your favorite? Whose Journey into Nyx mythic do you think will be most powerful? Let me know in the Facebook comments below.