Sometimes, it can be hard to break through the monotony of building decks. How many times have we relied on using the same cards over and over again? I
find this particularly true in Commander, where we all lean on the same reliable stuff. Virtually all of my Commander lists begin with stuff like Command
Tower and Sol Ring. And when my Commanders tend to be similar, the decks are as well. I don’t often build decks in real life that aren’t my style, so my
decks have even more cards in common.

And that’s where a project like Random Commander comes in! I simply head over to Gatherer, and hit “Random Card.” I’ll keep smashing that button until a
legendary creature pops up. Assuming it’s legal, I will then be forced into using it as the legendary creature I build a deck around. It’ll require me to
stretch my deckbuilding muscles in new directions.

So it’s time to spin the wheel, and see what legendary creature I flip…

On the 16th time I hit random card on Gatherer, I spy it. My legendary creature has arrived in all of his glory and splendor. The Primus has spoken. 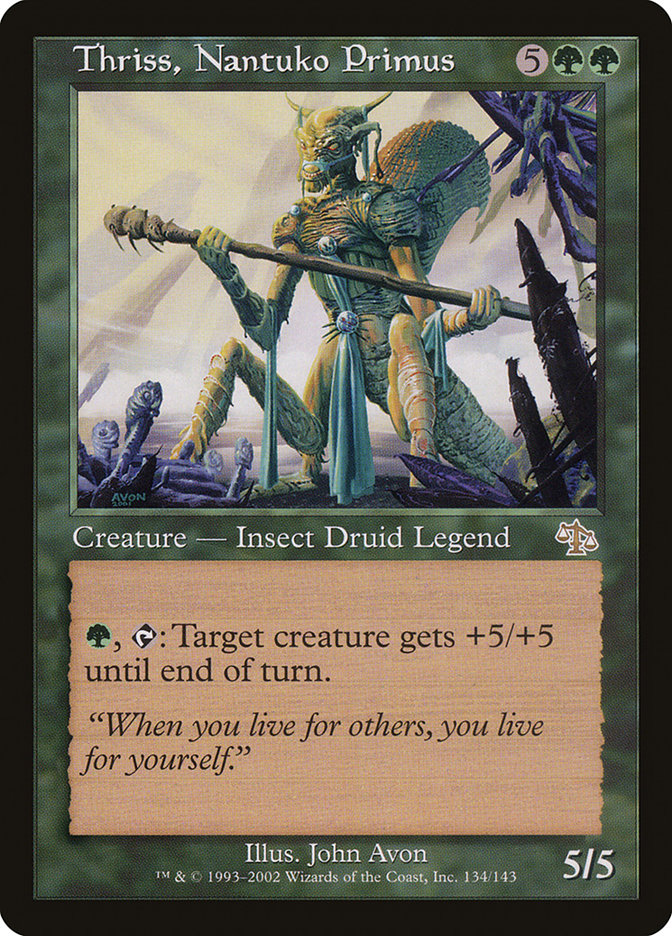 Now, in what ways could I take our good Primus friend? Well, I could make an insect deck, I suppose. But I’m not sure I’m feeling a tribal deck today. I
could make an infect deck, but that seems a bit obvious and boring. Let’s have fun with it!

And there’s our deck, all neatly wrapped and ready to go!


I thought green’s recent adoration of the fight mechanic was a wonderful fit to what Thriss can do. With the Primus of All backing you, who would lose in
the ring? I didn’t want too many cards cluttering up the deck, but I thought it was a good place to start.

Obviously, Arena is flavorful, fun, and repeatable, so I hit it up first. I also liked Durkwood Tracker to fight other attackers off, and Ulvenwald Tracker
to fight with something else that’s a bit beefier. For similar reasons, check out the Nessian Wilds Ravager. When it comes into play, do you want to give
me a 12/12 beater or a free fight? And that fight could end up with an 11/11 guy just by Thriss’ing him up. (Yes, Thriss is now officially a verb!).
Fighting is also a great reason to run Darksteel Plate. That way, the guy you send into the Arena can’t die.

I also looked for fun ways to abuse green creatures that care about their power and/or toughness. Obviously, we can’t run red, so things like Spikeshot
Elder are out. But that’s alright! We still have some nice options. One of my favorite is Aerie Ouphes. Thriss them, and then you can sacrifice them to
dole out 8 damage to someone’s flying dork – and they come back for another go. You also have stuff like Viridian Joiner.

Any Thriss deck needs to have creatures with trample. After all, if you are amping up people, you want to ensure that smashing face will ensue, and chump
blockers need not apply. Not every great synergy with Thriss has trample, so let’s alleviate that. The obvious choice is Nylea, God of the Hunt. She’ll
always give you trample, she’s hard to take off the field, you can pump extra mana into her as a pseudo Overrun, and this is a mono-green deck! You can
turn her into a creature fairly easily. I also wanted trample in a few other places. Take Baru, Fist of Krosa. Did you drop a Forest? Great! Then your
creatures grow and get trample for the turn! We also have Roughshod Mentor and Akroma’s Memorial. Trampling fun can now ensue.

I began to look for other fun ways to sneak in synergy with Thriss, like Hydra Omnivore. Deal 13 damage to one person and other foes take it too! Tornado
Elemental and Rhox will deal damage even if blocked so again, a Thriss pump will make them downright nasty (and the Tornado Elemental will clear out the
skies too). We have a lot of these fun little tricks in the deck.

I also added Nantuko Mentor, because Thriss’s court needs an advisor! Plus, it’ll often be nastier than Thriss (especially if you’ve already used the
Primus). Can you imagine, just as one example, attacking with your 22/22 Tornado Elemental? It doesn’t matter what blocker you bring to the table, someone
is taking 22 damage to the face!

In order to enhance these fun experiences, I included the typical suite of untapping for Commander decks. You have the stereotypical list – Magewright’s
Stone, Thousand-Year Elixir, Seeker of Skybreak, Puppet Strings, Staff of Domination, Rings of Brighthearth, and Scryb Ranger. Normally, you might expect
these folks with combo elements or nasty tap abilities like Visara the Dreadful; Arcanis the Omnipotent; Captain Sisay, and such. But nope! Today, we are
using these Spike/Johnny tools in the most Timmy way! We are going to make our creatures even bigger in order to smash your face!

Again, that’s one of the fun things about a random Commander project, I wouldn’t normally have thought of using that toolset with Thriss… and yet, the
beats will occur.

While this deck is not a tribal insect deck, I did toss a few druids into the mix. I don’t have enough to steal anyone’s lands with Gilt-Leaf Archdruid.
It’s in here just to draw cards. That’s good, because stealing your lands is very un-friendly at a lot of multiplayer tables.

We have a few ways of blowing out mana – Viridian Joiner, Sakiko, Mother of Summer, and Seedborn Muse. In addition to Staff of Domination, I gave us a
handful of ways to use spare mana here and there, such as Everflowing Chalice and Silklash Spider.

Outside of the creature base, I really expected to have some big creatures, and our cards take advantage of it. The commonly played Commander engine
Greater Good makes so much sense in here I can’t not play it. The same is true of Garruk, Primal Hunter, Hunter’s Insight, Momentous Fall, and Soul’s
Majesty. All of them can draw cards somehow based on the power or damage dealt by a creature. These cards, along with Thriss, give the deck some massive
card drawing potential.

This is a deck that is very sensitive to creature removal, especially mass removal. I added what I could – the aforementioned Plate, Asceticism, Archetype
of Endurance, Swiftfoot Boots, and Yavimaya Hollow. I didn’t think I’d have enough bodies to sacrifice to Eldrazi Monument or it’d be in here too. These
guys will help to keep our team safe from targeted removal (and regenerate from other damage). Sure, I tossed in the ubiquitous Eternal Witness, and I
could push this with things like Nim Deathmantle or Cauldron of Souls. But the ones I have are fine. I wish I could have found space for Spearbreaker
Behemoth.

I also wish green had a Withstand Death effect for all creatures, like Rootborn Defenses. But since it doesn’t, I’m running Creeping Renaissance to bring
back all of your dead creatures to your hand for another go.

Next, I began to flesh out the deck with land fetching and removal. In went typical guys like Acidic Slime and Krosan Grip against Cultivate and Yavimaya
Elder (who is a druid). I even tossed in Krosan Tusker to cycle for a Forest and a card early, or to play later and give Thriss another playmate.

And the deck was virtually done. In went a few important things – Rancor, Bow of Nylea, Mosswort Bridge, Swarmyard, One Dozen Eyes, and Beacon of Creation.
I had mostly forests in the deck, so the Beacon is a strong token maker. Those creatures will get amped by Gaea’s Anthem, Garruk Wildspeaker, Nylea, Baru,
and other effects. The rest fleshed out the deck in a variety of ways.

I had space for one trick card I’d love to run here – Vitalize. The deck obviously has a lot of tapping and attacking going on. I’d love to tap everything
and look open. Then someone attacks and I begin to tap some mana. 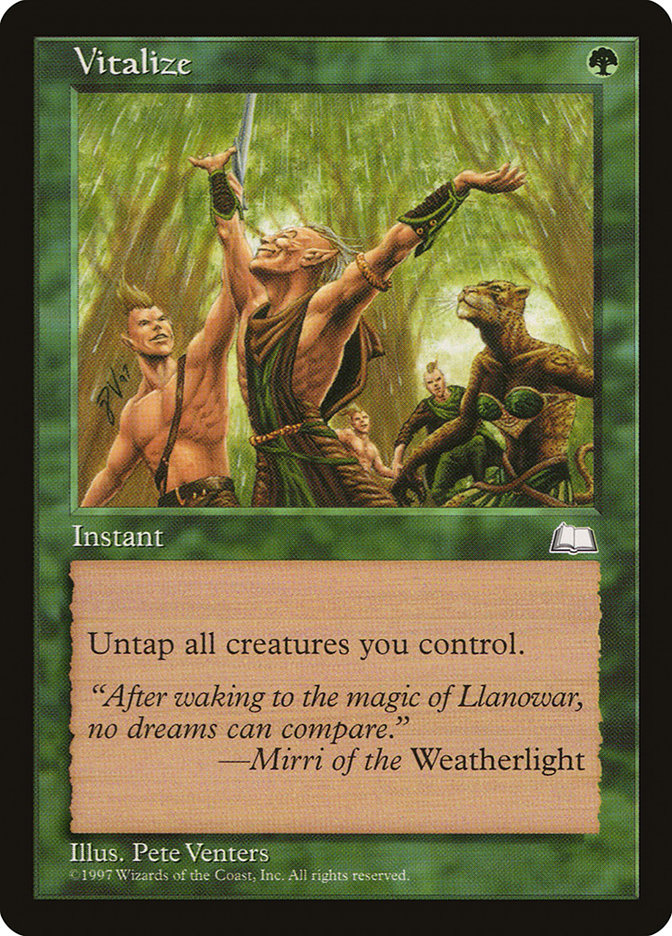 “Did I just walk into a Moment’s Peace?”

“Nope, not at all…you know I don’t like to run those things…”

And my eyes will spark as I play something very different, something much more Timmy. I untap my guys, and then gang smash the attackers with big beefy
guys that are enraged by the fact that someone would dare to attack me. Thriss will make them bigger and suddenly we blast the army and swing next turn
over the pieces and kill the Commander who deigned to look our way.

Or you could just use to untap things like Patron of the Orochi, Thriss, Joiner, and other fun creatures. But I prefer to hope for the above scenario!

And that concludes my Thriss deck. It was randomly selected by Gatherer, and I have to admit that I really enjoyed it. I hope you did too! There are a
passel of cards that work well with Thriss, but that I couldn’t unpack. As you begin to explore, I suspect you will find quite a few that I didn’t even
think of.

Thriss doesn’t have to be about insects or infect or other crazy stuff. It can just be about hitting someone with a really large Rhox or Krosan Tusker. So
enjoy the beatings!

I hope you liked the deck and the project. Let me know what you thought! Did you like the direction I went? Would have gone elsewhere? Are there some cards
I used that you didn’t think of? And finally, as always, thanks ever so much for reading!