I like seeing new legendary creatures that explore new ground. Marchesa, the Black Rose does something new. As does Muzzio, Visionary Architect; Brago, King Eternal; and Grenzo, Dungeon Warden. Conspiracy gets an “A-” for their commanders from me. Good job!

And M15 has a cycle of newly-minted mono-colored guys. The first (and last) time we saw a newly printed cycle of Core Commanders was fairly inconsistent. Some were hits as Commanders (Krenzo, Mob Boss and Talrand, Sky Summoner). Others were misses (Nefarox, Overlord of Grixis and Odric, Master Tactician).

Hopefully this set will swing and hit at least a single in the park, if not a full home run. We want runners on bases. With Conspiracy giving us some strong goods, hopefully the next set will too. 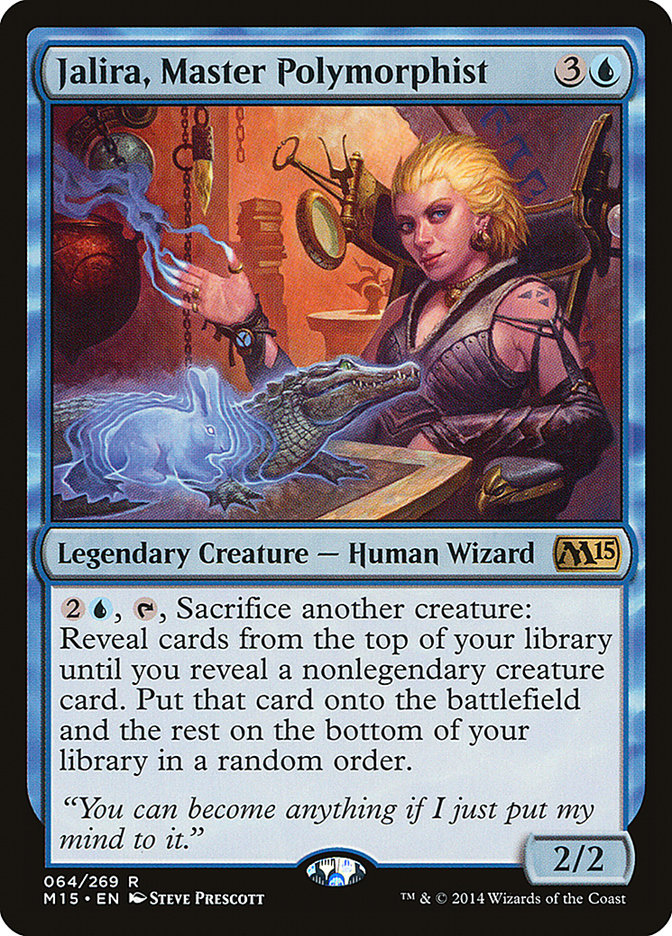 What does Jalira do that’s new? She’s a Proteus Staff on a stick.

Now, she is more limited than the Staff in many ways. She cannot put a legendary creature in play, so she’ll skip past Kozilek, Butcher of Truth or The Unspeakable. She also cannot Polymorph an opposing creature – sorry, just your own. And she won’t sacrifice herself either.

So sure, she’s more limited. But there are two major ways she’s much, much, much better than Proteus Staff.

First of all, she’s a legendary creature. That means she can reliably be played early and always in Commander. You can get her out every game.

But, it’s her second ability that’s really keen. While Proteus Staff can only be used as a sorcery, there are no such restrictions on her.

She is tricky. And she explores Polymorphing from a new direction.

So, let’s build a deck around our new friend!

What to call it?

No not that deck title. Anything but puns…

No, let’s steer clear of movie titles in my deck titles.

“A Polymorph a Day Keeps the Doctor Away?”

As we investigated above, Jalira cannot pull out the Eldrazi legendary dorks, or things like Akroma. That’s okay. We’ll be fine with guys like Darksteel Colossus and Inkwell Leviathan. (I even tossed in Ulamog anyway, since it can be played reasonably, and it works with the other Polymorph effects).

I decided to take Jalira in four major directions – token-making, creature stealing, library manipulation, and sacrifice engines. I felt each of these angles helped to enhance the power of Jalira.

Tokens will give us more fodder for Jalira – which is great because we won’t be forced to spend an entire card sacrificing real creatures. Plus, we will always have fuel for the fire. Since we are making more creatures, more sacrifice engines should prove handy. We can also steal a creature to sacrifice it to Jalira or our other engines. Finally, we have library manipulation to give us better information and ability to set up Jalira.

As you can see, those four avenues of attack open up some power for Jalira.

Let’s do these in reverse order. Blue has a ton of library manipulation. Sure, green might have Sylvan Library or Mirri’s Guile, but blue has basically everything else. Take a gander at Soothsaying as just one example. We have scry, which can set us up via Mystic Speculation, buying it back over and over again. We also have some scry stuff with Cryptic Annelid, Thassa, or Dissolve. Now add in stuff like Halimar Depths, Soldevi Excavations, and such. In slides the Divining Top and the essential Scroll Rack. We can set things up very nicely indeed.

What makes this deck work is that both Starfish cards work here! Sigiled Starfish is a fine early wall-ish critter with its 0/3 body and it can tap to scry, setting up a nice Jalira. It’s a nice adjunct to the deck. But Spiny Starfish? It blocks, regenerates, and then makes a 0/1 Starfish token that you can sacrifice to Jalira to use her Polymorph effect. That’s awesome!

So let’s explore other token-making, along with the Starfish. We can spit them out with Wall of Kelp too! It fits the Starfish theme and makes 0/1 dorks. Then we can toss in Sarpadian Empires and Volrath’s Lab, Meloku and Master of Waves. We make a lot of creatures.

Let’s give a special shout out to Homarid Spawning Bed, which does double duty in this deck. First of all, if you have a blue creature out, you can sacrifice it to this thing, so it’s a duplicate sac engine. In addition, it spits out a bunch of healthy 1/1 camarids. It both makes dorks for others folks and sacrifices too, so it plays two roles on the team. Good job! See also Helm of Possession – both a sac engine and a creature stealer.

Other sacrifice engines include Miren or Carnage Altar. You could also run Altar of Dementia or Blasting Station and such. I like these – they work well for a Polymorphing theme. We need card draw to unearth the synergetic combo stuff and lifegain to keep up in the rat race.

Creature stealing waves its head. This is an obvious place for Vedalken Shackles. With this many Islands in the deck, steal away my friends. Steal away! Treachery can steal and untap your stuff to keep going. We can also tap Beguiler of Wills or Callous Oppressor to steal stuff for the sacrificing.

And that’s not all of the combo-tastic-ness we have! Take a look at the evoke guys – AEthersnipe and Mulldrifter. Now play them with their cheap evoke cost. They arrive, and then put the evoke trigger on the stack with their enters-the-battlefield trigger. Sacrifice them to something like Homarid Spawning Bed, Carnage Altar, or Jalira. You finish with your sacrifice trigger and the ETB trigger from the guy for a mana-light investment.

Now let’s head in with stuff like Desertion, Flow of Ideas, Sol Ring and Inundate, to round out the needs of the deck.

We already have the beaters to Polymorph into, as well as fun stuff like backup Polymorphs! In heads Reweave and… well… Polymorph itself!

Take a look at Day of the Dragons. ‘Nuff said! It turns the entire horde of dorks we’ve made into 5/5 flying dragons!

I won’t discuss every card here, I want you to ponder why some are here. You’ll figure it out! (Sometimes the answer is easy. Fog Bank blocks stuff. Everflowing Chalice makes mana.)

And there are tons of other cards to consider too! Other options include Jace, the Mind Sculptor, Discombobulate, Omenspeaker, Augury Owl, Prognostic Sphinx, Sage of Epityr, Looter il-kor, Benthicore, Master Thief, Sower of Temptation, Old Man of the Sea, Aerie Worshipers, Diamond Valley, Take Possession, Ashnod’s Altar, and many more.

So make a deck around one of the new dorks from Magic 2015, shuffle up, and have some fun!

P.S. – The title of today’s deck comes from a very obscure source. When I was a child, a famous organist came and played at my local church. (I think his name was Ronald or Ron or something.) In addition to playing a lot of classic standards, he also played a few pieces he had written. One piece was just him playing the pedals of the organ, and not using his hands at all. It was fascinating to watch. He named the song “Pedaling Through China.” He claimed, jokingly, that most organists have no sense of humor, and gave him a cold shoulder due to that name. That really struck with me, and I use that title even through today. In fact, I used it for a deck for SCG way back in 2006. Since the word of today’s column, Polymorphing, began with “P” like Pedaling, and since it seems like a new verb in Magic nomenclature, that concept hit me, and I knew I had my title.