Is there a better feeling in Magic than flashing in a Fleetfeather Cockatrice mid-combat to block your opponent’s best creature? The answer is no. There
certainly isn’t. Blocking just feels so good.

My favorite types of games of Magic are those where I can sit back defensively and grind my opponent out of resources before I eventually develop enough of
an advantage to push the offensive. I like to sit and wait and let the fight come to me. I like when my opponent goes into the combat step, tanks for a
long time, and then decides “No. No, I guess I can’t profitably attack this turn.” That’s when I’ve won. It may not happen for another five turns, but I’ve
won.

I could go on and on about how awesome blocking is. I could tell you about how shoving a Thragtusk in front of a creature was the sexiest thing you could
do in 2013. I could talk about blocking in Constructed or even Block Constructed for hours. I’d love to do so. I’d love to take a trip down Nostalgia Lane
because, you see, those days are a relic of the past, and all I can do now is just relive the old days. This gameplan just doesn’t work anymore. You can’t
see me right now, but there is a single tear slowly running down my cheek.

Sylvan Caryatid and Courser of Kruphix might be defensive creatures at heart, but if there is one thing that I have learned from testing this upcoming
Standard format, it is that the best chance you have to win in this format is to be proactive. Just kill your opponent. Don’t durdle. Don’t get fancy. Just
attack.

There’s a strong chance I play something like this deck at the Open Series this weekend in New Jersey. While this may be a Courser and Caryatid deck, make
no mistake, this deck likes to attack. 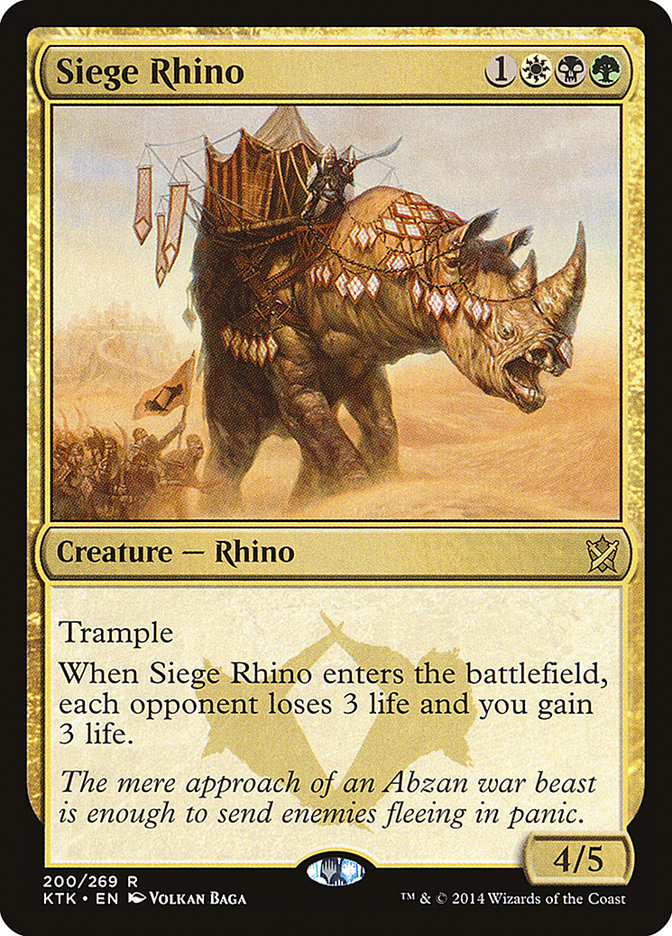 Nissa doesn’t make 4/4 lands with trample to play defense. Sorin’s +1 ability was designed to let you attack and not die on the swing back.

Whoa. Scary thought, indeed. Well, if they are just going to be a meanie pants and attack me, then I guess I’ll just go belly up and die. Tit for tat.

It was gross. Goblin Rabblemaster is a hell of a card.

In testing this Abzan deck against other decks, it turned out that whichever player ended up being able to take the aggressive role in the games was
winning nearly every time.

Turn 3 Siege Rhino on the play was game. But if my opponent cast a Rabblemaster on turn 3 and my board was just a Sylvan Caryatid… well, it didn’t seem to
matter how good my hand was, I probably wasn’t coming back. 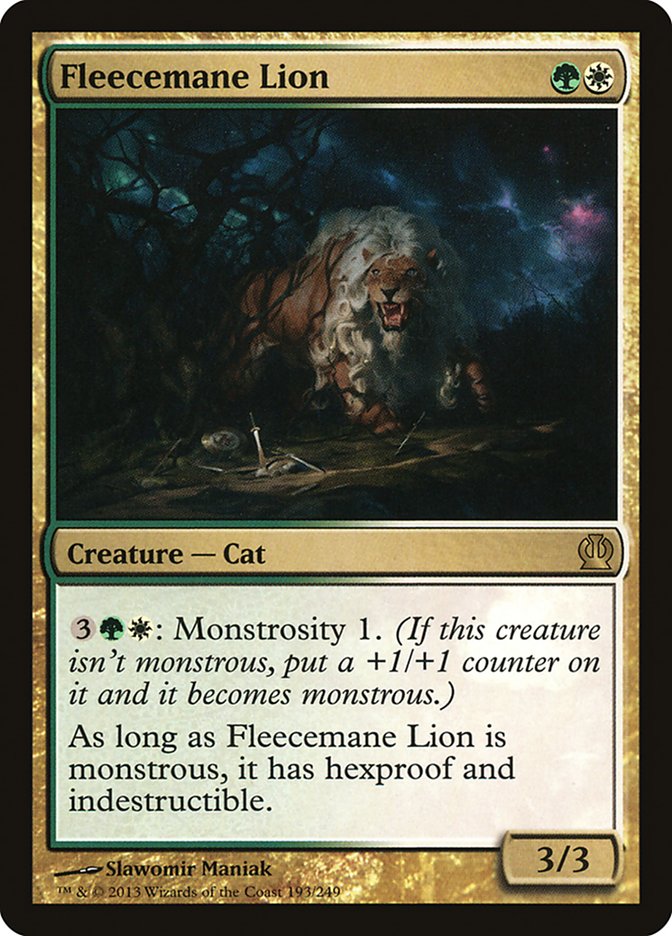 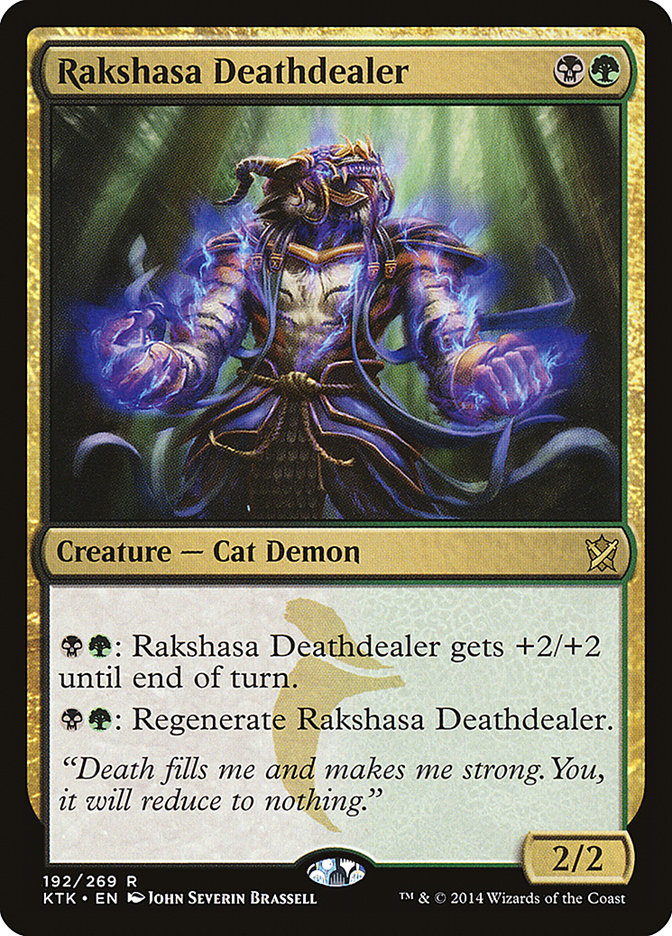 Fleecemane Lion became such an important card because you could cast it on turn 2 and deter your opponent from wanting to cast a Rabblemaster. In fact, I
was finding that a turn 2 Fleecemane Lion was actually better than a Sylvan Caryatid in a lot of situations. Having that early board presence was so
important, that I started to want to play some copies of Rakshasa Deathdealer as another copy of Fleecemane Lion. In other words, a two drop creature that
can come down early, brick Rabblemaster for a turn, and still attack through Courser of Kruphix and Sylvan Caryatid going long was proving important.

The early damage from Fleecemane Lion was also turning out to be extremely relevant. Putting your opponent down to nine life before they “stabilize” was
actually the same as killing them in a lot of situations. If they are scared to attack you, then it is only a matter of time before you can draw a Sorin to
kill them or just play enough copies of Siege Rhinocerous to drain them out.

Stabilizing in this format is a tough sell to me. We had so many games in testing where one player would lock up the board at something like 9-11 life.
They would sit back on their four removal spells and feel comfortable. Six turns later, they died to some Lightning Strikes and a Stoke the Flames.

There isn’t a Sphinx’s Revelation. There isn’t Blood Baron of Vizkopa. Gray Merchant of Asphodel isn’t the same as it was before. Thragtusk doesn’t exist.
Batterskull isn’t around. Every point of damage you take is real. It’s hard to sit back and play defense and feel good about it. It doesn’t take much to
just die out of nowhere.

But you do know what feels good? This little guy. 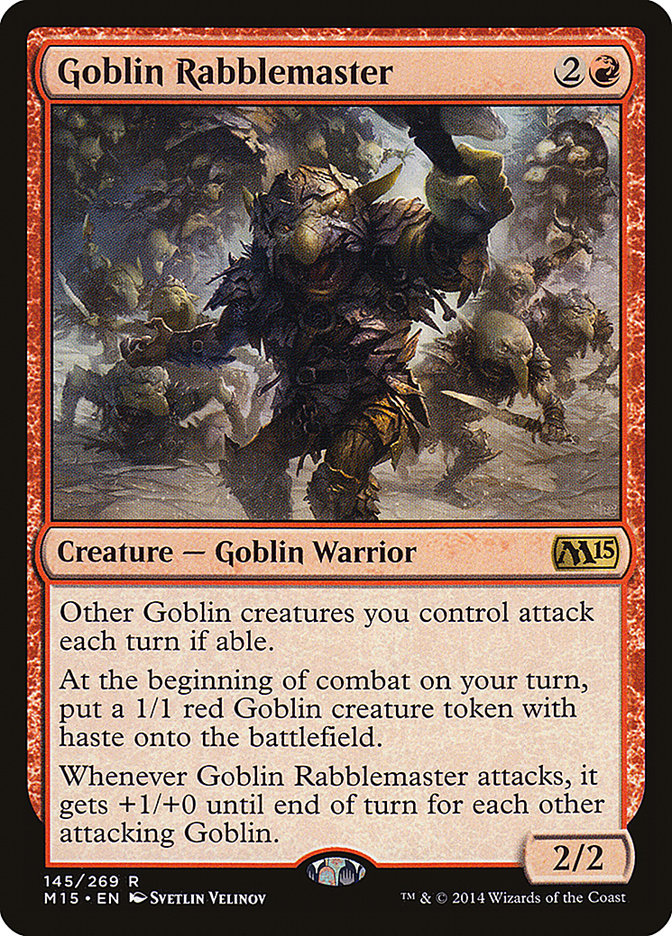 The feeling of making a goblin token with Rabblemaster and attacking with it into an empty board is euphoric. The dread you feel when your opponent untaps
and plays their third land is real. The feeling of relief that washes over you when they don’t have a Rabblemaster is hard to explain.

They always have it. Life is unfair. There is no justice.

Thankfully, I’ve got good news. This time, you can be the one that has it. All it takes is putting four copies of Goblin Rabblemaster into your deck and
voila. You too can smash your opponent’s hopes and dreams on the back of the little gray ogre that could. Combat? Trigger?

This is my most recent update to the Mardu midrange shell that I’ve been working on. You may notice that it looks quite a bit different than some of the
takes in my last article. The main thing that has changed is that I’ve gone back
to a more aggressive approach. I still am not a fan of aggressive one drops in a deck that is basically roped into playing a bunch of lands that come into
play tapped.

With that being said, that doesn’t mean that you have to play a defensive gameplan. You don’t need one drops to still be dedicated to the plan of attacking
your opponent. As a result, my removal spells have undergone a drastic shift. Gone are the days of Bile Blight and Hero’s Downfall. Instead, I toned black
down to be a splash color and focused more on removal options that can also serve as burn spells. With the exception of Banishing Light, which I felt was a
necessary catch-all, all of my removal spells are capable of also dealing damage to my opponent. In the case of Crackling Doom, it’s both removal and
damage.

The creature base has also changed. Now, with a lineup of Rabblemaster, Brimaz, Butcher of the Horde, and Stormbreath Dragon, I am well suited to end a
game very quickly. The game plan remains the same. I want to Thoughtseize, Despise, and kill my opponent’s creatures and then hammer the game home quickly
with powerful and often hasty threats. With the exception of Brimaz, all of my creatures are capable of dealing damage to my opponent on the first turn
they enter play. That damage adds up. Painlands. Fetchlands. Crackling Doom. Stormbreath Dragon. It doesn’t take that much to kill them from there, even if
they are sitting on a bunch of removal spells.

My old Mardu lists were trying too hard to control the game. The new list has given up on that unachievable ideal. Now, I just want to mess up their early
game and then kill them before they recover. “I’ll Thoughtseize your Sylvan Caryatid. Pass back? Goblin Rabblemaster. Oh, Polukranos? I’ll Crackling Doom
you. Attack for six more.”

Standard isn’t about taking control of a game and grinding your opponent out anymore. It’s about taking an early advantage and hammering it home before
they can recover. Thoughtseize and Goblin Rabblemaster are best friends in that regard. They don’t mess around.

One thing that worries me though, is that if attacking is just the best thing you can do, why even bother playing a deck like this Mardu deck? Doesn’t it
just lose to other decks that can attack better? Maybe the deck we should all be playing looks more like this.

I have only gotten a couple of games in with this deck. I’m sure that there are a lot of ways this list could be improved, and at least for an
inexperienced red mage like myself, that kind of improvement can only come from testing. The sideboard is a mess, and the right mix of burn spells, pump
spells, and creatures is hard to know. It may come as a surprise, but I’ve spent a lot of time thinking about Mono-Red, and I’ve come up with about 3-4
different ways to build the deck. All of them have merits and drawbacks.

Regardless of build though, one thing is clear. I like the concept of being able to attack your opponent early in the game before they get their strategy
going and then once they finally stabilize, you can just kill them with the fourteen burn spells. With all the three color mana bases, comes into play
tapped lands, and incidental damage that players will deal to themselves with painlands and fetchlands, maybe simple really is the way to go.

Eidolon of the Great Revel deals a lot of damage. Goblin Rabblemaster deals a lot of damage. Ashcloud Phoenix is a powerful threat and one of the best
cards in the set. With the exception of Foundry Street Denizen (who should maybe just not be there), these cards all pack a punch, and they do so early
before your opponent can really interact well.

All of the good removal spells in the format cost three mana. Lightning Strike and Bile Blight are the only universally powerful ones that cost less.
People are going to have a lot of slow draws in this format, and maybe now is the perfect time to just kill them before their cards matter.

This format is weird to me. One drop creatures haven’t been powerful, and one of the best creatures is a 2/4 for three mana that gains life. It seems like
the format should be a slow, grindy affair. Despite that, one thing still seems abundantly clear in all of the testing I’ve done.

The best thing you can do is attack. You don’t have to play one drops, but you should still want to attack.

This weekend, I’ll be playing in the Open Series in New Jersey. It’s the first tournament with Khans of Tarkir legal, and I couldn’t be more excited. It’s
only a day before the tournament, and I still don’t know exactly what deck I am going to play. But regardless of what cards I eventually sleeve up, you can
count on one thing. I’m going to be turning my creatures sideways.

This time, I’ll leave the blocking to someone else.