I wanted to bring you some red-hot new tech for States, I really did. I had an idea, and it had synergy, and it served a strategic goal, and it sounded just crazy enough to work. Sadly it didn’t work, at least not in the way I wanted it to, so I’ll probably end up playing Gifts or Blue control or something this Saturday. I thought I’d share the idea with you, though, so you can play with it yourself and maybe create a States-winning deck on your own.

The idea was very simple: use Weathered Wayfarer together with the “bouncing” common dual lands in Ravnica. Both cards serve the same purpose, and reinforce each other in the direction of that purpose: they let you make all of your mana drops, at the cost of having fewer lands on the table than the opponent. They could also form a nice card advantage engine for a control deck. 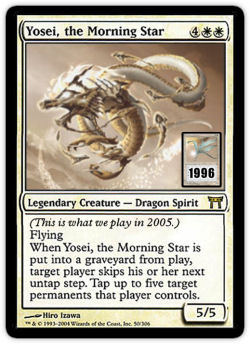 I eventually settled on Red/White with Boros Garrison. This would in turn allow you to run Thoughts of Ruin, which is synergistic with your combo since there will almost always be extra land in your hand when you cast it. I thought my best win condition would be Blinking Spirit, until I remembered that this isn’t 1996 anymore, so I fell back on the old reliable Yosei. To power out the legendary dragon, some serious artifact mana would be necessary. That gives us this decklist:

I’ll discuss what you would sideboard, and certain issues like the lack of Sensei’s Divining Top, a little later. First, a little info on playing the deck. Even if you win the die roll, you’d prefer to draw first, to guarantee a Wayfarer activation should you draw him. (the only exception would be if your opponent was running Boros or some other very fast, very aggressive deck). You then intend to play:

Turn 2: Use Wayfarer on upkeep for Boros Garrison, play the Garrison.

Turn 3: Re-play the Plains, which will allow you to play some artifact mana and/or use Wayfarer on your opponent’s end step.

Turn 4: Take control of the game with either Wrath of God or Thoughts of Ruin.

Alternatively, you can simply play artifact mana on turn 2 or 3, with the intention of casting Wrath or Thoughts on the following turn. After you have cast Thoughts or Wrath, then you will have bought enough time to get to Yosei (in theory, anyway).

Only rarely will you be able to make mana all the way up to Yosei and then cast Thoughts of Ruin. Against the control decks I expect to see in this format, you shouldn’t even bother to try for that. They will have used Sakura-Tribe Elder, Farseek, Kodama’s Reach, etc., to get quite a mana advantage on you while you are diddling around with your Wayfarer. If you wait around to cast Thoughts of Ruin, you could be facing Kokusho or Grave-shell Scarab or something similar and then it will be too late.

So, is this deck good? Objectively, I have to say no. The good news is that you stomp most forms of beatdown; aggressive decks in the format don’t have a good way to deal with Wrath, and you can burn down most creatures that try to pick up a Jitte.


The bad news starts with combo decks; most of them will be running light countermagic, which means that your primary plan against them (Thoughts of Ruin, derf) is not going to always succeed. Since your winning methods are limited, if they get the proper countermagic draw you could be simply screwed. However, if you can resolve Thoughts, you’ll almost certainly win, and you can pack some bullets in your sideboard for them.

Even worse is game one against mono-Blue; it’s obviously wretched for you, and if they are maindecking Threads of Disloyalty, you won’t even get to out-mana them. However, you have a good sideboarding plan of cutting Yosei and Thoughts of Ruin for Boseiju and Blaze. You might recall that Mike Flores recommended a similar strategy with his “Kuroda” Red deck for Regionals, and that deck didn’t even have Weathered Wayfarer at its disposal.

Your Yosei win condition is vulnerable to Cranial Extraction, which is bad, but the worse part is that your opponent often doesn’t need to be worried about the dragon. They have a free spell, and enough cards to pitch to it, that they can remove Yosei even if Thoughts of Ruin manascrewed them. They’ll be happy to pay the price for doing so; in many games, Gifts simply accepted the tap-down, and because the W/R deck is usually lacking in pressure beyond the first Yosei, the Gifts deck’s inevitability with infinite Kagemaro dominated the long game even in the face of Armageddons and 5/5 flying Time Walks. 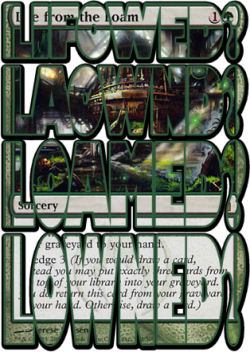 As mentioned above, you need 2 Boseiju and 4 Blaze against Blue-based control. Against Gifts and other Green-based control, I think you have to go with a four-of anti-land creature, to avoid being owned by Life From the Loam (Lowned?). The only question is if that creature should be Hokori, Dust Drinker or Zo-Zu the Punisher. You put a gun to my head Saturday morning, I’ll say Hokori, because he goes better with your Plains-heavy mana base. You’re still having problems either way, though, because you don’t really have a good answer to Sickening Shoal.


Against aggro, you will probably be taking out Thoughts of Ruin. You don’t need to bring in too much – Wrath and twelve burn spells are plenty of creature sanction. I would recommend selling out versus Umezawa’s Jitte and Glorious Anthem; basically the only way you can lose is if you get a Wrath-light draw and the opponent gets a draw which can abuse one of those two cards. Seed Spark seems like the answer; you could even use it as an alternate win condition with Spectral Searchlight, or by splashing a single G/W land.

With a couple of slots remaining, I decided to throw in a pair of Devouring Light, as an extra out against Jitte and a nice answer to various Dragons of the Hunted and Evening Star variety. That gives us this sideboard:

2 Boseiju, who Shelters All

By the end of testing, those Shocks were looking very ripe for the axe. They are the weakest card in the deck by far, and you do seem to need some help in the form of Sensei’s Divining Top. However, I was concerned about not having enough shuffle effects for the Top, and also Shock was pretty good against Isamaru, Hypnotic Specter, and Jushi Apprentice, all cards that I expect to see heavy play at States.


To solve the shuffle effect problem, I also considered a version of the deck with Shock and Signet cut for Top and Gift of Estates. Gift isn’t a terrible card, but it’s also a sorcery, which I don’t like so much. For this reason I decided to pass on it, but it might be something you’d like to investigate on your own.

One radical change which I considered was using Green instead of White. This gives you access to Birds of Paradise and Llanowar Elves, which accelerate you quite a bit better than the artifact mana in the W/R version. However, they’re also vulnerable to Wrath, and you lose your Thoughts of Ruin disruption as well as your burn. Again, I decided to pass, but I did go so far as to sketch out the following decklist that you might want to toy with:

3
“>Kodama of the North Tree

So, the deck is not great, especially against the most dominant deck of the previous Block season. However, that’s not to say that you couldn’t do okay with this deck at States. It’s an experimental format, where people have not yet found the best uses for cards from the new set. Example: after I started Virginia States 3-0 last year, in round 4 I faced a fellow whose hot new tech for Affinity was Sensei’s Divining Top with no shuffle effects (for some reason, he was surprised that he eventually ended up with three useless cards on top of his library).


As long as you can stomp most of the aggro decks – which this deck can do, in spades – you can hope to take the control players by surprise or hope that they haven’t yet found the right tech (such as Life From the Loam).

Couple that with some tinkering and experimentation of your own, and you just might have something to take your State championships by surprise. Such is the attraction of States, for the casual player and professional alike. Well, okay, probably not the professional, since they need to be testing for PT: LA next week, but you know what I mean.

You might be curious about the Gifts deck that was dominating testing so much. Well, here it is:

3 Life From The Loam

That’s right, no Divining Tops. Life From the Loam is that good, plus I figured lots of people will be taking aim at Gifts with Suppression Field and Pithing Needle. The only question is if I can afford to cut down to one Life From the Loam; against a Mono-Blue deck I’d really like to draw it normally, but in most other matchups I simply want to Gifts for a copy and start the engine that way.

Until next time, here’s hoping you have better luck with Weathered Wayfarer than I did.

This article written while watching the Major League Baseball playoffs. I’m a Cubs fan, but if you forced me to pick one non-Cubs team, the White Sox would be it.