Way back when I first started working at StarCityGames.com, the Open Series had yet to visit the state capital of Ohio. Can you believe that?

Magic has a deep and storied history with Columbus. Right at the beginning, Magic: The Gathering won the Origins Award for Fantasy or Science Fiction Board Game of 1993. Since then the bond between Origins and Magic has been strong, continuing to this day with the Origins Game Fair’s partnership with the Open Series, including this summer’s Invitational on the weekend of June 13-15, 2014!

Magic’s third-ever professional event took place in Columbus, put on in conjunction with US Nationals over Independence Day weekend in 1996. This was a part of "Necro summer," which saw Necropotence decks dwarf the competition in tournament after tournament. In fact, the archetype was so dominant that the finals of Nationals that year featured a Necro-on-Necro matchup of Dennis Bentley versus George Baxter. In stark contrast, the Pro Tour was Ice Age Block Constructed, a wide open and unpredictable format eventually won by a seventeen-year-old Olle Rade (now a member of the Magic Pro Tour Hall of Fame and Wizards written coverage team!) with a red and green midrange deck featuring eight Spiders!

But that’s enough about ancient history. A little recent history is in order!

After last weekend the biggest mover on the SCG Players’ Championship Leaderboard was (to no one’s surprise at all) Tyler Wilkerson. Just look at this jump!

You read that right: plus 838! Bolstered by his near back-to-back wins, winning the Standard Open and finishing in the Top 4 of Legacy, Tyler Wilkerson blasted his way onto the map. Alas, he did not capture the elusive twofer. And somewhere Gerry Thompson popped a bottle of champagne.

Also making headway was StarCityGames.com writer Harry Corvese, and after his article last week explaining this new type of grind, it’s no surprise to see him traveling down to Florida and picking up twelve spots in the rankings to move into 47th. And with his solid finishes in both formats, including a Top 8 appearance in the Legacy Open, Pro Tour Gatecrash Top 8 competitor Stephen Mann moves up into 46th, just a nudge in front of Mr. Corvese. Grind harder, Harry!

There will be even more moving and shaking in the standings this week as several of the Top 16 of this season’s players will be hoping for more. So stay tuned!

But that, as Rafiki says, does not matter. It is in the past. Let us look forward to this weekend’s festivities!

Our home this weekend, as it so often is, will be the Greater Columbus Convention Center, Terrace Ballrooms 4 and 5 on the North end of the building. (The map below is aligned at a 90-degree angle. To see it aligned with north up, lean your head to the left). 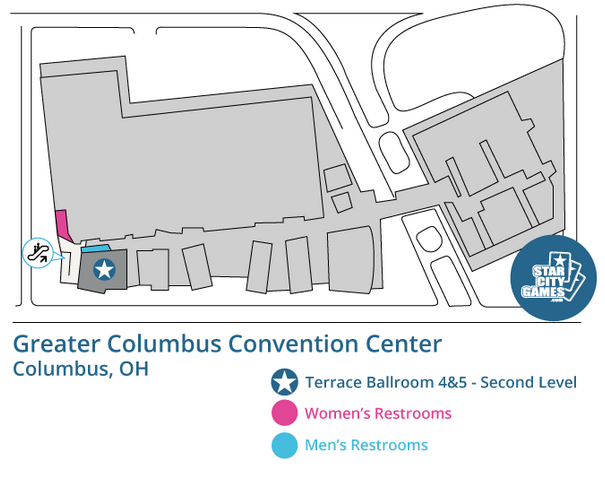 There are some wonderful restaurants near the Convention Center. I highly suggest going to the North Market for lunch. It’s only a block or so away and features 35 local restaurants, vendors, and merchants offering everything from pizza, sushi, and bratwurst to a fresh fish market, a wine shop and fresh baked bread. Then for dinner Barley’s Brewing Company Ale House No. 1 right across High Street from the event site (467 North High Street  Columbus, OH) is always a hit when I take out of town guests out for a night of brew pub style food and award-winning Barley’s beer, which is brewed right on site.

This weekend the Columbus Convention Center will also be playing host to Columbus Winter Beerfest. This event is always popular and highly attended, so plan for more difficulty parking and larger crowds. The GCCC is a huge venue that can contain us both, but it’s good to be aware.

Also, if the event doesn’t go your way, you can draught while you draft! Tap lands while you tap kegs! Pick up some IPA while you 3v3 team draft some IPA!

It just wouldn’t be a weekend of Magic tournament coverage without @SCGLive, and it wouldn’t be SCGLive without our talented commentators! This weekend our one-two punch of Cedric Phillips and Patrick Sullivan team up once more to deliver the best Magic coverage in the business. They will be joined in the Sideboard by myself as well as our newest Event Coverage Coordinator Nick Miller! Nick is a great friend of mine from way back, and with a resume that features nearly a decade in sports journalism, you can expect great things from him as well. The hashtag for the event is #SCGCOL, and you should be sure to follow us on Twitter for news, match coverage, deck techs, analysis, and cartwheels.

So close, Ced. So close.

Good luck, have fun, and welcome to the heart of it all!