There are two things that the city of Indianapolis needs to understand.

First, you do not leave a playoff football game when your team is losing and there are still ten or more minutes left on the clock. Period. It doesn’t matter if you’re cold; get some mittens and a blanket. It doesn’t matter if your team is losing by four touchdowns; you sit there and boo as is your god-given right. Those tickets were $200 at least.

Second is salt trucks. I don’t know what was up with Marion County, but everyone else south of the Great Lakes seemed to know that a massive storm system was about to come and dump all over everyone. All the counties to the east of Marion displayed evidence that they understood the concept of salting and plowing roads, but it seemed that all the good people of Indy wanted to do was declare it illegal to go outside and wait for the sting of leaving the Colts game early to dissipate.

When I made the decision to go to SCG Open Series: Indianapolis this past weekend, it was 9:30 PM Friday night, and I was sitting at home on my couch losing in the first round of a Cube draft. I thought I was in the process of settling for an uneventful weekend of football and Magic Online when the Internet began to flicker and I lost confidence in half of that equation. Not quite ten minutes later I was in my car and driving. I spent the first two of the six hours on the road in silence just piloting my vehicle. Spending time that way is not difficult for me; I enjoy a good think, and luckily there was quite a bit to think about.

Recently SCG Organized Play added a piece to their Open Series product that may make it worth more of your time and energy to play in SCG events every weekend instead of traveling to Pro Tour Qualifiers and faraway Grand Prix. With the addition of the SCG Players’ Championship, the Open Series finally has a system in place to emulate Wizards Organized Play. If you’re able to travel freely to multiple Open Series, the benefits associated with various levels of success can leave you with a high-level Magic experience that’s closer to the Pro Tour than ever before.

The SCG Invitational is a "Triple A" Pro Tour.

Qualifying for the Pro Tour is tough. If you happen to frequent some of the PTQs in Pennsylvania, New York, and the Ohio Valley, we’re talking 200-300 players tough. The only prize that matters is the one you get for first place, and stories of players that have come agonizingly close only to fail have been a dominant part of the community conversation for years now.

SCG Invitationals are near-exact replicas of Pro Tours. There is a five-digit first prize, a 300+ person invitation-only field, and three days of competition across multiple formats. This is the formula for success in today’s large tournament environment, and qualification is well within reach of the average player.

It’s quite a thing to sit around your local shop with the belief that you are the best player in the room. It’s the kind of thing that makes young wizards from all over the world thirst for competition at the PTQ level and beyond. Unfortunately it’s rare that dominance at the local shop level ever equates into success at the Pro Tour.

PTQs are a bottleneck of ambition and mid-level talent. It’s understood that unless we’re interested 1,000+ person Pro Tours limited slots for qualification are a must. Not so with the SCG Invitational. In its infancy the Invitational awarded an additional $25,000 to its competitors, but it was scaled back due in part to small field size. This shows a clear room for growth and allows the SCG Open Series to offer us events with an invitation to participant ratio more in line with what many wish the PTQ scene provided. One, two, and sometimes four invitations can be given away in a single event and all from the comfort of your local shop, where you reign supreme.

SCG Open Points give you additional outs to losing in crucial matches.

Throughout last year and part of 2012, the following meme became popular in connection with players who had gone to great lengths while still not qualifying for the Pro Tour. 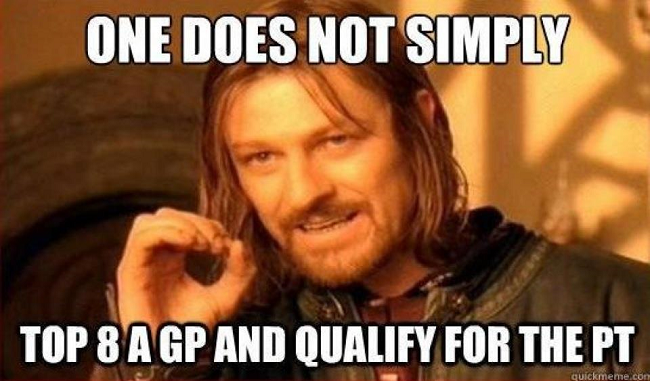 I myself made the Top 8 of two Grand Prix inside of three weeks and still came away uninvited to Pro Tour Gatecrash. One of them (Grand Prix Philadelphia—yes, the one with the hurricane) even had almost 2000 people. Luckily I was rewarded when public outcry grew loud enough to justify a round of emergency invites and special considerations.

Other stories came out, such as one in Europe about a player who made Top 8 of five PTQs in five different countries and still was not qualified. Recent SCG Invitational winner Max Brown accomplished something similar here in the states but was overlooked (!) after what must have been a decision that "five different countries" had a much better ring to it than "five different states" even though the distance traveled was comparable for anyone who has ever looked at a map of Europe.

Many problem solvers came up with proposed solutions involving a point system for PTQs, but for obvious reasons the sweeping reform necessary for implementation was never considered. Not so with the SCG Open Series. Points are awarded for strong finishes as well as participation in larger events, and in time players who truly have the drive to succeed will be paid off with the opportunity to battle in an SCG Invitational.

The SCG Players’ Championship lets the big fish flex their muscles in a pond of reasonable size.

Remember how I described that feeling of believing you’re the best in your local shop? Put 700 people in that shop and call it a convention center instead. Owen Turtenwald knows what I’m talking about.

Can I get a what what?

The prize money given out at the SCG Players’ Championship is almost identical to the way we crown the World Champion every year these days, and while the Open Series is currently tailored to Americans (east of the Mississippi and near the Mason-Dixon line), the competition features without question many of the best players in the world.

The size of the field at the average Open remains significantly smaller than the average Grand Prix, and many quality players will not travel far for them. This means that players can expect smaller and softer fields for tournaments that feel essentially like Grand Prix.

Season 1 of the 2014 Grand Prix schedule is light on American events.

As of right now, the only Grand Prix that will be held in the continental United States between now and the end of March are Grand Prix Sacramento and Grand Prix Richmond. This means that for most players there is only one Grand Prix option depending on what part of the country they live in. That leaves eight weekends available for grinders to fill with events. The SCG Open Series has something for you to compete in almost every weekend between now and then.

The addition of the SCG Players’ Championship has not yet impacted the plans of many top players.

On Wednesday I started a conversation with friends via Facebook regarding the addition of the SCG Players’ Championship to the Open Series. The question was:

"How will the addition of the SCG Players’ Championship affect your attendance of Opens and local IQs?"

Of the 25 responses I received, only a few players said that they would be attending more tournaments as a result. No one responded that they would attend fewer events, and the overwhelming response came in the category of "same amount." Many players drew comparison to the old Player’s Club benefits that made it worthwhile to fly around the country to different Open Series, but most players said that while the new system is akin to the old the personal incentive still isn’t quite there.

What this means for you is that if you live in an area of the country with easy access to multiple Open Series the game is afoot. While some of the Open Point totals on the current SCG Players’ Championship Leaderboard may seem out of reach (certainly few will aspire to catch William Jensen until some of the seasonal rotations occur), it’s the players in the bottom half of that grouping that are going to be feeling the pressure to compete.

So I will give you aspiring grinders the same advice I have given to many athletes in the field of sport: pick someone out. Find someone on that leader board that you can draw comparison with. Maybe they live near you; maybe they look like you. Or maybe, just maybe, they made you feel silly one time when they beat you at some event somewhere. Perfect. Beat them. Go forth with confidence and determination. Be better than they are and never lose sight of your goal until the task is complete and it’s your name up there on that leaderboard above theirs.

And finally, the Player’s Club.

The biggest difference that remains between SCG Organized Play and Wizards Organized Play is the benefits associated with each program’s respective players club. This likely comes as the result of a difference in what goals each program is trying to accomplish. The goal of Wizards is to reward a limited number of players with enough incentive to continue aspiring to be the best at the highest levels of the game. The goal of SCG is to grow involvement in the Open Series. Thus the rewards associated with each differs drastically.

A world with an SCG Player’s Club that provides greater incentive would look very similar to the landscape of the Open Series circa 2011 when it was dominated by a handful of players willing to put SCG Tour® naments first before Wizards ones. A debate on the topic of whether or not that benefits the greater good of the game has many sides. I don’t profess to be an expert on any of them, but I will say this. As a competitor, I’m always looking for new and better ways to compete. Hopefully the recent changes to the Open Series will produce enough involvement that we can consider a return to those more lucrative Player’s Club days in the future.

The addition of the SCG Players’ Championship to the Open Series has shaken the landscape of competitive Magic in the United States. While it’s not yet on the level of being more worthwhile for players than Pro Tours and Grand Prix, it’s absolutely an improvement on those environments for aspiring, middling, and even second-tier professional players. I know that with a fresh year of competition upon us I personally already have a player on the current SCG Players’ Championship Leaderboard in my crosshairs.