Craig isn’t afraid to go much more controlling than most people are comfortable with in his White Weenie strategies, and this deck is really looking to play a minor control game early with Searing Spear and Banisher Priest while setting up huge attacks with Silverblade Paladin and Sublime Archangel. This deck is built to take advantage of Slayers’ Stronghold in a way most people haven’t really tried to do before but which is definitely familiar to Craig. 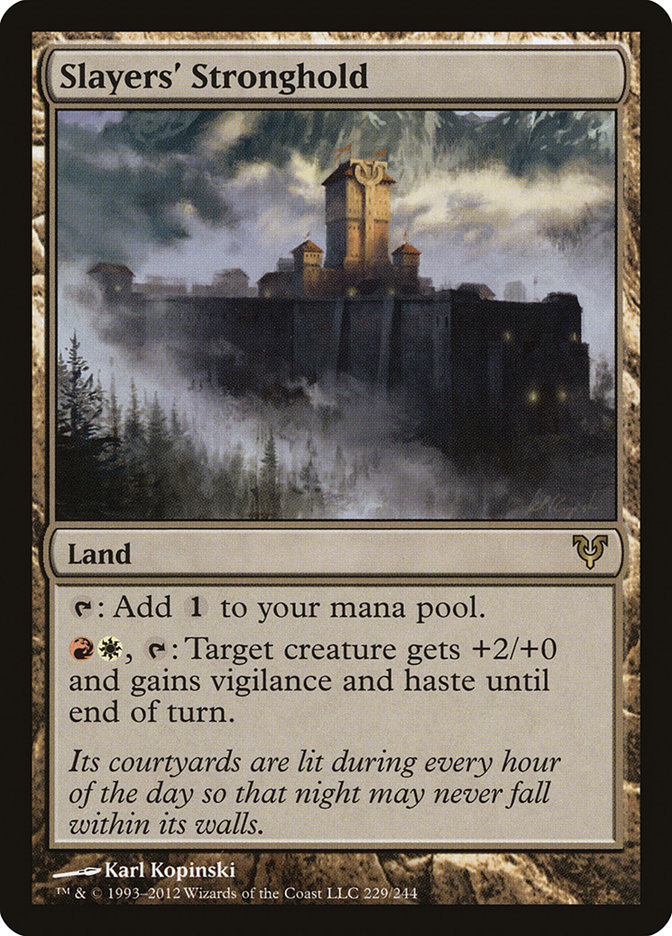 Outside of Slayers’ Stronghold, the primary card driving Craig’s deck is Brave the Elements, which makes investing so much mana in a creature in a format where there’s plenty of removal much less dangerous because he can get ahead by protecting his creatures for a single mana. Patrick Chapin commented on the lack of Boros Charm to counter Supreme Verdict, but I think Craig is happy to play against Supreme Verdict, where the fact that his curve is so high stops him from running into it too hard and his Slayers’ Strongholds really get to shine since he can just pressure with one powerful hasted threat at a time with any creature in his deck.

I’m not sure how much of a future this deck has, but I’d caution against the narrative “this deck showed up at the World Championship and then just died off.” I’m guessing it didn’t get the early press of Kibler’s deck because Craig went 2-1 while Brian went 3-0 and because Brian’s ideas have a way to spreading. I don’t know that Craig’s deck is the real deal, but it probably plays out differently than you expect just by looking at the list. I suggest giving it a try if you’re a fan of attacking with creatures.

Brian Kibler deck is likely to start the Burning Earth revolution we’ve been waiting for. If it was just a sideboard card out of Mono-Red Aggro, people wouldn’t really need to properly respect the card, but if Kibler’s deck continues to be the force it currently looks to be (and I see no reason why it wouldn’t), people won’t be able to just concede to Burning Earth. I think we’re about to see a substantial rise in the prevalence and number of one- and two-color decks in Standard, which would be awesome because it would mean people are building a lot of new decks.

As a result, I think that looking to the World Championship for guidance going forward is already outdated. I can’t think of another tournament where the most played deck only won a third of its matches. Normal formats just don’t allow that to happen because players don’t choose to play a deck unless it’s been doing well. The results really make it look like the competitors here were just trying to get too clever by choosing the deck that has a lot of play rather than really figuring out the best deck—of course, that’s an easy narrative to sell in hindsight. In reality, it did look to be a reasonable choice going in, especially when one remembers that just before the deck did win a Grand Prix.

Regardless, I think if I want to play a blue control deck going forward, I’d look to play one that’s better against Burning Earth.

Fortunately for those of us looking ahead to a world where our decks are going to have to prominently feature basic lands, the Magic World Cup featured a Unified Standard portion, and there was no way to divide the dual lands for that format such that every player could play three colors (while having access to all of their dual lands), so every team had to feature at least one one- or two-color deck.

This is part of why Kibler’s deck caught on in such a big way, but it was far from the only two-color deck we saw in the tournament.

Starting at the top, we have France, the winning team (congratulations, Raph!—and the rest of the team of course). France played only a single three-color deck, choosing the consistent format-dominating Jund over Brian Kibler R/G deck either because it was a deck they knew to be good or because they’d prepared and tested in advance and didn’t want to jump ship at the last minute.

Their other decks were U/W Flash and Mono-Green Aggro. I like the look of the U/W Flash deck Yann Guthmann piloted. 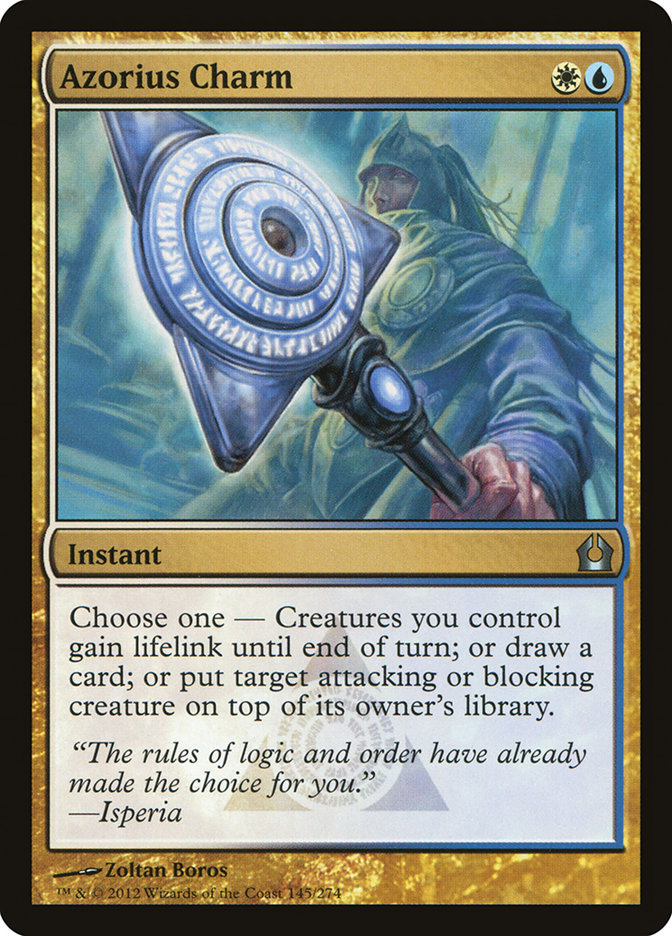 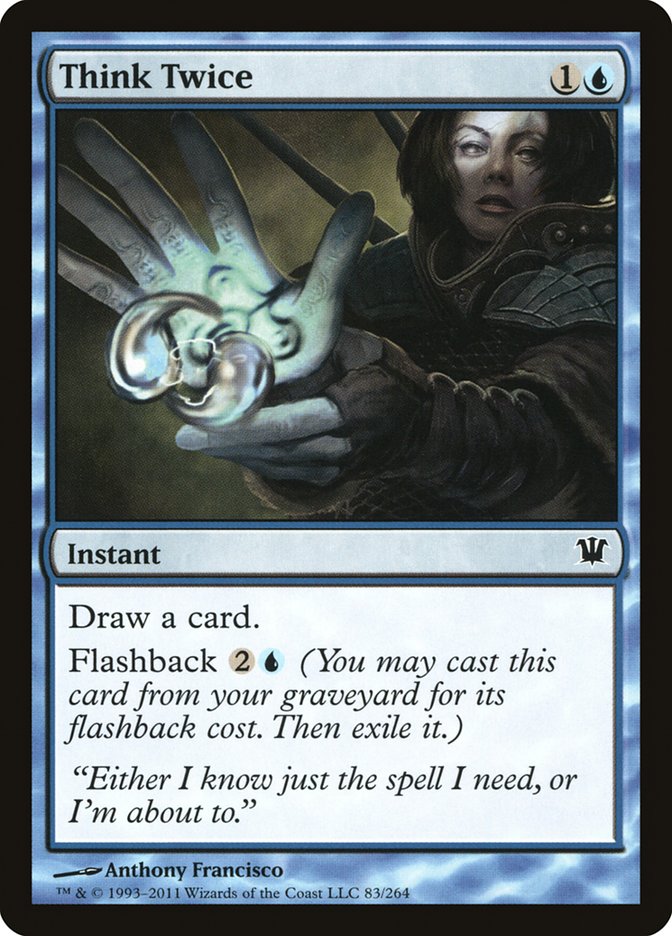 I’m conflicted on two Azorius Charms / two Think Twices. On one hand, those are both cards I’d like to see more of, but on the other hand, you can only play so many cheap cycling cards. Yann’s playing three Thought Scours, which make a lot of sense with Moorland Haunt and Runechanter’s Pike, and I like including those cards.

Another choice I don’t love here is the exclusion of Ratchet Bomb from the 75. I can’t tell you exactly what I think he needs it for, but I’d definitely like to have access to it myself.

Ultimately, I come away from this deck feeling like it’s not perfectly constructed but that it does a good job of demonstrating that there are more than enough cards for U/W if that’s the two-color direction you choose to go with.

Next we have Raphael Levy Mono-Green Aggro deck, and it definitely looks like Raph’s kind of deck.

If you follow the evolution of Mono-Green Aggro from Richard Ngyuen’s third-place finish at the StarCityGames.com Standard Open in Richmond:

Zvi captured and committed to the big mana approach of Richard’s deck, while Raph focuses on the other half, dropping the top of the curve and adding Avacyn Restored Limited all-star Druid’s Familiar to a streamlined aggressive shell. 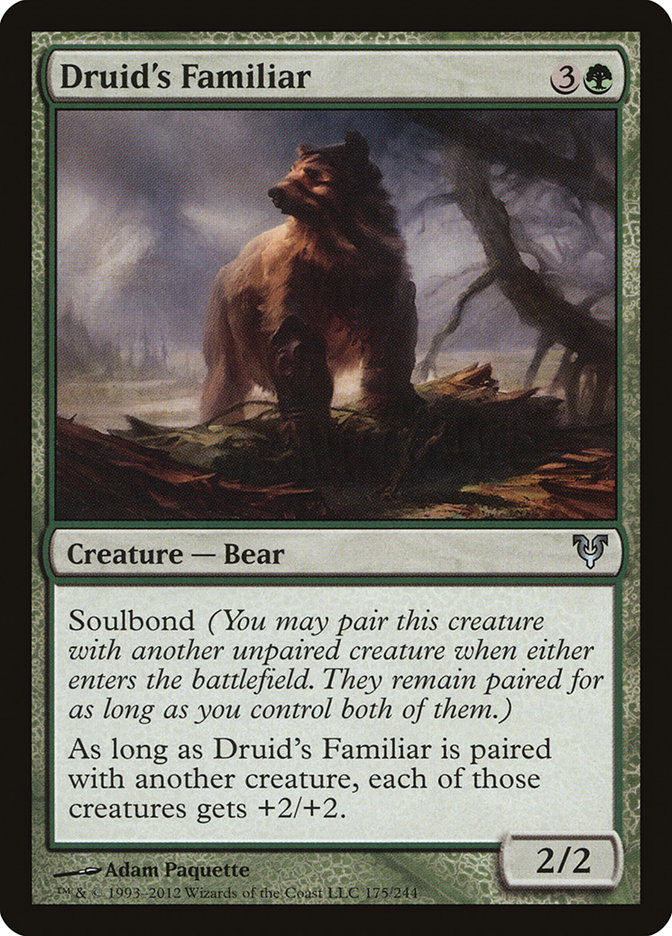 I like most of Raph’s choices, with a note that I’m a little skeptical about Druid’s Familiar rather than just paying one extra mana to get Kalonian Hydra and I might like to see more Scavenging Oozes. I get that without removal of his own it’s not as good as it is in Jund, where he won’t always be putting creatures in the graveyard, and that it’s a late game card when he’s probably looking for something that will pressure more early. But the power level of the card is just so high, and I think he can reasonably expect that many of his creatures will die one way or another.

Oh. I just realized that he was on a Unified Standard team with Jund, so he just got the leftover Scavenging Ooze. It’s likely that if you play this deck in an individual event, you want to cut the Druid’s Familiars for two more Scavenging Oozes.

I would be delighted if this deck is good. I’ve wanted to see Disciple of Bolas succeed in Standard since it was first spoiled, and Desecration Demon and Thragtusk have been the frontrunners for best creatures to sacrifice. I also love Sign in Blood in this deck and the fact that it gets to play Mutilate, particularly with creatures that are big enough to live through it.

I think the strangest choice here is Tree of Redemption because I’ve never seen it played just for value without being able to increase its toughness somehow in order to gain life every turn. It might be good enough just as a blocker, but it feels like such a missed opportunity not to have the ability to profitably tap the Tree every turn.

I think my biggest fear with the deck is that against Jund I’m not sure what the plan is to beat a Rakdos’s Return. It’s possible to topdeck out of it, but I feel like a lot of games will get to the point where they Rakdos’s Return your hand, drop an Olivia Voldaren, and just win.

I guess that means I’d probably want Witchbane Orb in the sideboard to complement Duress to protect against a topdecked Rakdos’s Return.

Finally, we see an interesting choice from the Czech Republic’s Stanislav Cifka in U/B Control. The once-popular Standard deck has barely been played since the printing of Sphinx’s Revelation, but Cifka uses Opportunity as a supplement to Forbidden Alchemy and Think Twice to replace Sphinx’s Revelation, with Tribute to Hunger as supplemental life gain.

Coming off of a World Championship flooded with U/W/R Flash, it’s easy to see why one might want to play a control deck that can use Nephalia Drownyard. Between Forbidden Alchemy, Opportunity, and Snapcaster Mage, this deck has plenty of velocity to never run out of things to do with its mana, which says to me that it passes the viability test on cutting Sphinx’s Revelation. Yes, this has enough card draw that it wouldn’t just be better to splash for Sphinx’s Revelation, particularly in a world with Burning Earth. I really like the card-advantage package here.

Another thing that I like is the dedicated use of Ratchet Bomb and Curse of Death’s Hold to help make up for the lack of Supreme Verdict. As with most U/B Control decks, the deck dedicates a huge number of slots to spot removal for creatures, but with Duress and Negate out of the sideboard in addition to Drownyard, I think this deck will generally be very well positioned against other control decks.

Forbidden Alchemy offers an important kind of protection against Rakdos’s Return in that even if they make you discard your entire hand, it in the graveyard can often get you back on your feet against Jund. Using a ton of removal spells on Thragtusks and Huntmaster of the Fells can be annoying, but counterspells help there. If you’re willing to take a bit of damage, Ratchet Bomb is a very clean answer to a flipped Huntmaster of the Fells and its Wolf token.

It’s certainly possible that Jund will hold as the deck to beat through the end of this Standard format, but I’m optimistic that we might still see substantial shifts in the decks run alongside it. If you’re looking to pick up something new, I’d strongly recommend looking to stick to one or two colors, and it’d be great if you’re prepared to fight red and green creatures.