Welcome to the Mox Insights preview for the Season One Invitational! Today, we’re excited to bring you a massive Standard analysis leading the final tournament of Season One of the SCG Tour. We have combined the data for Day 2 of SCG Richmond and SCG Syracuse, along with the complete matchup data from the first Arena Mythic Championship Qualifier tournament. After that, we’ll talk briefly about what players should expect from Modern.

This is going to be a lot, so let’s dive right in!

This has easily been one of the most dynamic Standard formats in a long time. While we haven’t been tracking Standard as a group for too long, as longtime players, we can assure you that this has been something really special. Each week has seen new decks emerging to attack the metagame, which has also presented some challenges when we break down this data for you. Small sample sizes are challenging to draw meaningful inferences from, not to mention the ever-shifting line and midrange-style planeswalkers arms race that is a constant presence in this format. We first tried to look at the data through the lens of archetypes: 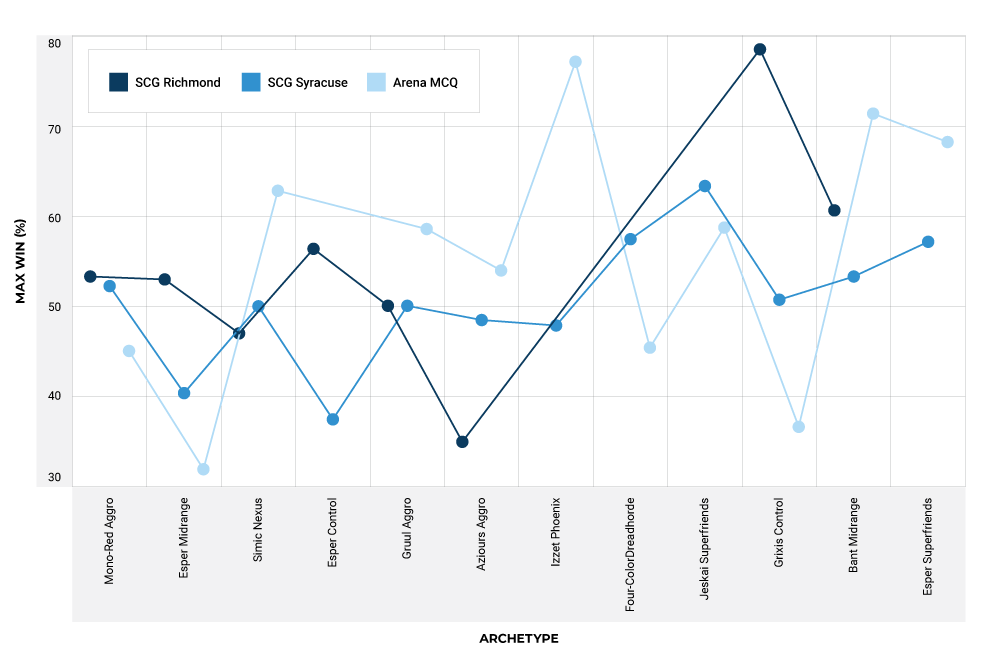 These were relatively consistent in terms of the major archetypes that were being represented and doing well. While this might not show any significant changes, our grouping for this included at least four different decks per archetype, the smallest being the control archetype. If you want options in this Standard format to fit your play style and preference, you can find them.

We shifted then to looking at the Top 12 most-represented decks over these three events, charting first their popularity: 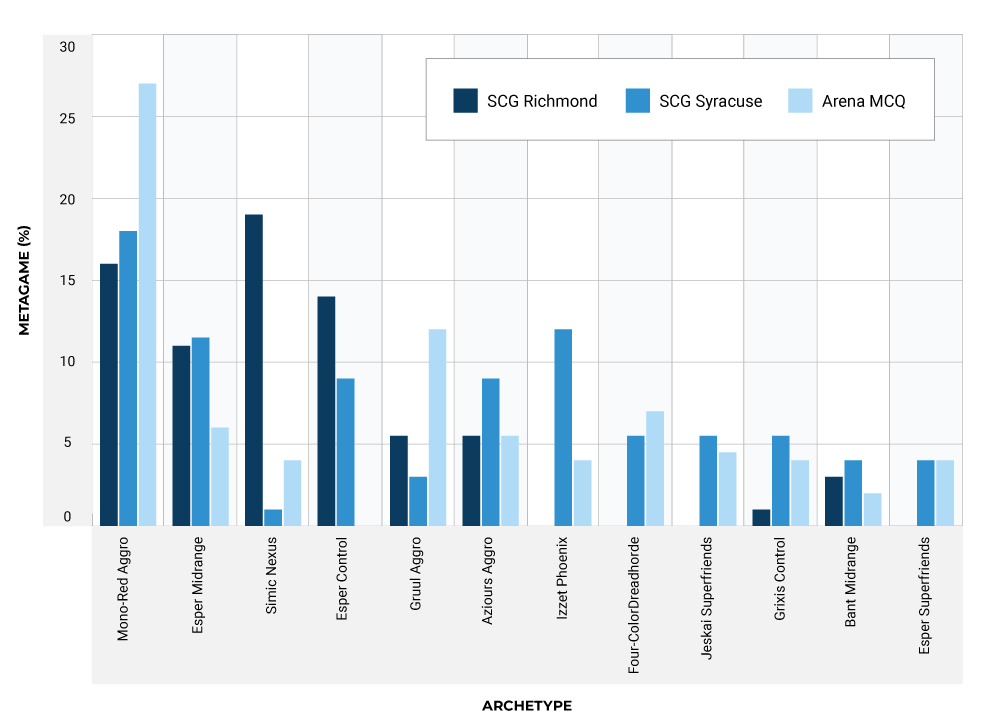 Here, we’re showing you the overall win rate of the decks versus their presence in the metagame: 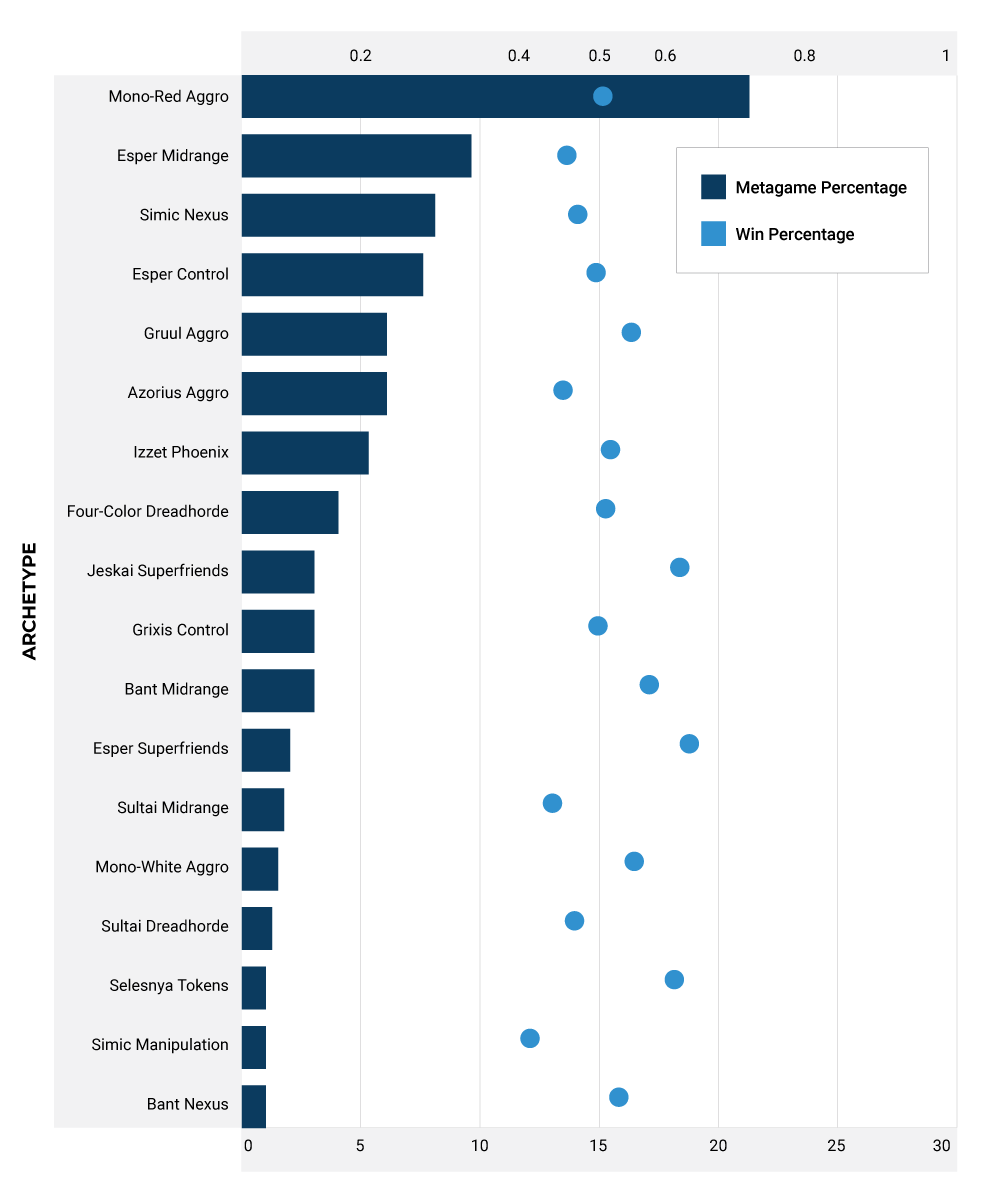 Several stories start to emerge from this. The first thing we noticed was the precipitous decline of Simic Nexus and the ascending popularity of Mono-Red Aggro. And yet, as Mono-Red rose in popularity, its win rate decreased. We might expect something like this to happen as players pick up the deck, that its overall win rate goes down, but Mono-Red suffered deeply at the Arena MCQ as players seemed to finally give it the respect it deserved. 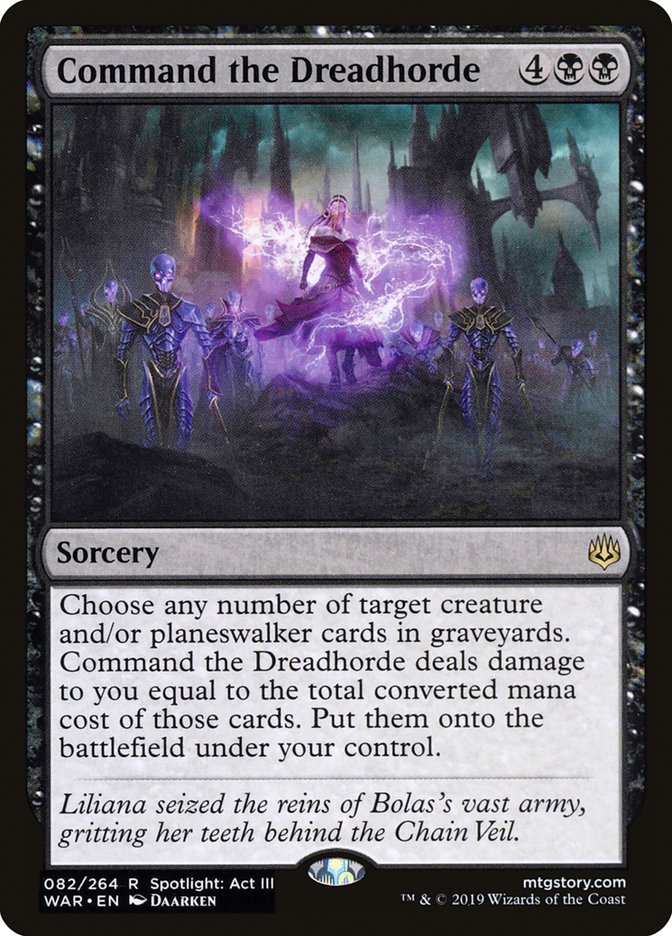 What this has done, however, is open up two lines of attack. First off, it led Izzet Phoenix to pick up significant metagame success. While it performed poorly at SCG Syracuse, Izzet Phoenix was one of the top two best-performing decks at the Arena MCQ, along with Bant Midrange. The second angle was the rise of Nissa, Who Shakes the World decks, where specific Command the Dreadhorde archetypes moved from four-color to Sultai Dreadhorde, and various rebuilds of Simic Nexus and Mass Manipulation strategies. Just as responsible for the rise of Nissa, Who Shakes the World strategies, though, was Teferi, Time Raveler.

Make no mistake: Teferi, Time Raveler is the pillar around which this Standard format has moved. His proliferation in decks has deeply influenced things like Esper Control, which entirely vanished from the metagame by time of the Arena MCQ. He has allowed for the growth of many sorcery-speed strategies, such as Command the Dreadhorde, that would not have existed in a world where control strategies could be successful.

We’re going to run through some of the top-tier strategies before we dig into the combined archetype performance of the Standard decks.

This list from Ethan Gaieski is fairly typical of the current configuration of Mono-Red lists. Mono-Red players have settled in the camp that Experimental Frenzy is the primary four-drop of choice, with some number of Chandras seasoned to taste. Players have varied their sideboard strategies around Dire Fleet Daredevil, Legion Warboss, and Tibalt, Rakish Instigator. The one consensus shift has been Risk Factor being removed from sideboards entirely as players have leaned into the four-drops in red as their way to fight and stick with longer games. This is the absolute Level 1 of the format, even more so than our next deck, Esper Midrange.

Going into the Invitational, Mono-Red has unfortunately never been worse-positioned. You might see mainstay players like Gaieski run Mono-Red back, but it will be one of the most difficult fields for Mono-Red players after the explosion of Gruul at Grand Prix Kansas City.

This build from Grand Prix Kansas City winner Ben Friedman is a reflection of a re-work of the Esper Midrange deck that Martin Muller popularized, shifting from Thief of Sanity to Basilica Bell-Haunt as a strategy to fight both Mono-Red and Jeskai Superfriends, but also a card that was already good against animated lands out of Nissa, Who Shakes the World decks. We originally were down on Esper Midrange, but many players posted success with it, so we had to ask if our prediction that Esper Midrange was not where you wanted to be was accurate. Muller and Ondrej Strasky have been hovering around the top of the Arena Mythic Ladder with similar builds of Esper Midrange; Ben Friedman won a Grand Prix with it.

The rest of the players? Not as hot. Look at these win rates:

Esper Midrange has posted a consistent decline since Richmond, even as its metagame share has shrunk. There could be many reasons why. Gerry Thompson’s contention was that the early iterations were misbuilt. It might be that being a known quantity really is a test of player skill to move around the meta and be ahead of the meta. If you’re planning on Esper Midrange as your deck of choice for the weekend, you should know that the winds are not in your favor.

In response to Esper Midrange and Mono Red’s popularity (ranging anywhere from 25-30% of the metagame) on the Arena ladder, Gruul decks started rapidly gaining popularity as players went through multiple iterations of the deck, from low-green, highly aggressive builds to very bulky planeswalker-powered Gruul midrange decks, such as Michael Byars’s second-place-finishing deck.

The Immortal Sun is a nod to the rest of the format and Living Twister is one of the greatest blockers of all time, with the burn and fliers to help control the battlefield as well as close the game quickly. Gruul has exploded on the ladder but just as quickly has featured the return of one of its predators, which we’ll talk about later.

Izzet Phoenix has been an interesting mainstay of the format since it started winning Magic Online MCQs. It ran that back by crushing the Arena MCQ with a 76% win rate, the highest out of any major archetype in the field. This eighth-place list from Top 8 finisher Andrew Ziggas is a bit different from other Phoenix builds in its use of God-Eternal Kefnet, but make no mistake: Izzet Phoenix is an underrated and underplayed, at least in relation to its win-rate.

With Izzet Phoenix on the potential upswing, it might be time for Mono-White Aggro and Azorius Aggro to return to the meta. Azorius has posted a slowly improving win-rate versus the field, with strong potential versus Izzet Phoenix and Gruul. 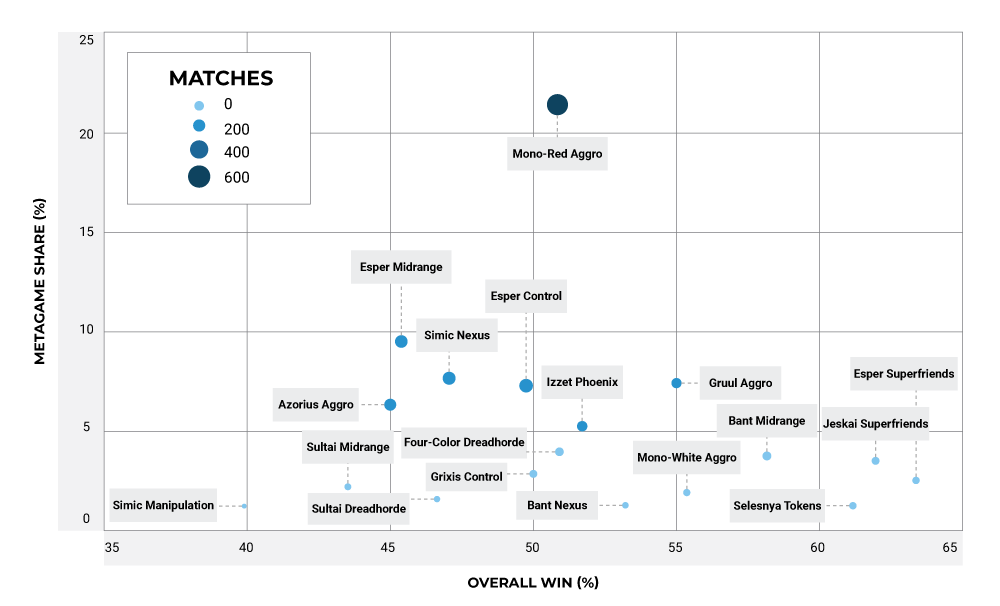 When we combine the results from each event, that leads to some interesting conclusions. First off, Jeskai Superfriends might still be coasting on its performance at SCG Richmond, so we want to put an asterisk on that result.

Gruul Aggro looks to be one of the best choices going into the Invitational specifically because of its performance against the big two of Mono-Red and Esper Midrange. Gruul’s bad matchups like Grixis Control and traditional Sultai Midrange are such small proportions of the field, they’re not even worth considering, and both those decks are bad against the aforementioned top two decks around which most of the meta is moving. If you don’t know what to play, Gruul is an extremely safe option.

Bant Midrange is another one of the decks that has strong potential; it clowned on Mono Red at the Arena MCQ, which is where much of that 2-1 win rate comes from. Right now, little is being written about the deck, so it’s a relatively unknown commodity, but we do know that the Bant Flash decks that were early in Standard have fallen by the wayside in favor of tap-out midrange strategies.

A rogue option for those who can’t quit the Nexus life style is a rebuilt version, just as we had discussed in our previous analysis of SCG Richmond:

Turner Madick’s list ditches Wilderness Reclamation in the world of Teferi, Time Raveler and leans hard, with the option to turn into a Mass Manipulation deck post-sideboard against a Dreadhorde or Esper Superfriends/Midrange strategy.

For much of our commentary on Modern, we’d refer you to our breakdown on SCG Louisville. We don’t anticipate much changing since last week, since SCG Louisville is the only significant paper Modern event since War for the Spark released.

While Standard might be changing, in Modern, things are actually stabilizing for the most part back towards an equilibrium. Izzet Phoenix and Humans are still the top decks of the format and will be significant presences in the Modern side of the invitational. Taking a deck that is weak against either of these is a recipe for disaster for your Modern rounds. We also firmly believe Dredge is an excellent choice to attack either of these decks and we anticipate Dredge numbers to be at least slightly higher percentage of the field than Dredge was in Louisville.

While we’re not tracking the data from these, we wanted to show a couple of decks that we think have promise from the SCG Classics since War for the Spark released if you’re not interested in playing Izzet Phoenix, Humans, or Dredge.

This Azorius Control list from Jeremy Bertarioni is already moving towards some of the conclusions that are percolating around Azorius Control, emphasizing the presence of Narset, Parter of Veils and less into Teferi, Time Raveler. Bertarioni’s list is moving in the right directions for his sideboard as well: Cataclysmic Gearhulk as a fourth sweeper versus Humans and a Restoration Angel package that can get brought in for nearly any matchup are strong choices to make a deep run.

The other “rogue” option that we’d like to recommend is TitanShift.

Consistency is important in Modern. TitanShift has been a consistent presence in the top-finishing decks, even if it isn’t an overwhelming performer versus the field. TitanShift has put a single copy in multiple Grand Prix Top 8s and SCG Opens, this past weekend including one in the Classic as well. Both versions from this past weekend leaned into Khalni Heart Expedition builds that focused tightly on a combo kill. All this combined with a resilient, forward gameplan makes TitanShift a strong contender for someone looking to navigate the Modern side of the Invitational.

We’ll be back to give you a breakdown of the Invitational to see what players actually brought to the tables, but know that for Modern, we’re about to go on a whirlwind of moving meta as Modern Horizons is released, into Core 2020 and the implementation of the London mulligan rule, which we do anticipate will shift some numbers around. Humans performed very well at MC London, but it had the advantage of open decklists at the time. Either way, Modern is in for a significant shake-up in the coming months. Standard will continue to churn, but we’re looking to explore the Fandom Legends event.

As always, we’ll be here on Star City Games to bring you more Mox Insights.