As you wonder about the Tenth District, scurrying about on some tedious errand for your guild, a glimmer inexplicably catches your eye. Near a gutter,
dank not only with the usual wear and tear but also with the water you found it in, lies a book of sorts. It’s adorned with far more many metal hinges
and latches than necessary, and the leatherish backing is dyed a now-faded cobalt and fuchsia. It seems to be heavily traveled book, and if nobody’s
around to claim it (you glanced around), you might as well save it from a Golgari scavenger. It’s only the right thing to do. As you continue forth on
your assignment, the book seems to understand your curiosity, and it opens itself effortlessly almost as if you’re invited in.

The Multiverse is an interesting place.

I wanted to test my newly configured and reinforced mizzium thermo-aetheric mana conversion rig, so I figured I’d venture out on another jaunt into the
Blind Eternities to determine its structural integrity during a planeswalk. I somehow landed in a plane I could never even begin to comprehend. It was
called “Indianapolis,” and they were having their yearly ritual of celebrating games. I regard games much as I do my experiments combining my spark-given
powers with my guild’s gizmometry: they must be honed through research, diligence, and more often than not, by just pumping as much time or mana into it as
possible to see what happens. So I embraced my inner Dimir and acted as a native resident of the plane both in terms of actions and thoughts, a relatively
easy thing to do for somebody as powerful as I am; even the Firemind is unaware of my ability to visit other realms. Using my Spatial Electrofractalyzer, I
was able to record an immense amount of data, and I will record it here for further analysis.

The festival seemed to last for four days, which is extremely long for this sort of thing. Also with these particular four days being the best in gaming,
they required a hall unlike any other, and you really need to be there to see for yourself.

Yes, there is even more space than what is shown here. The hall was truly gigantic, and where I spent most of my time.

Now what all does this hall contain? Really anything you can desire. But the following entries are but a small sample of examples. 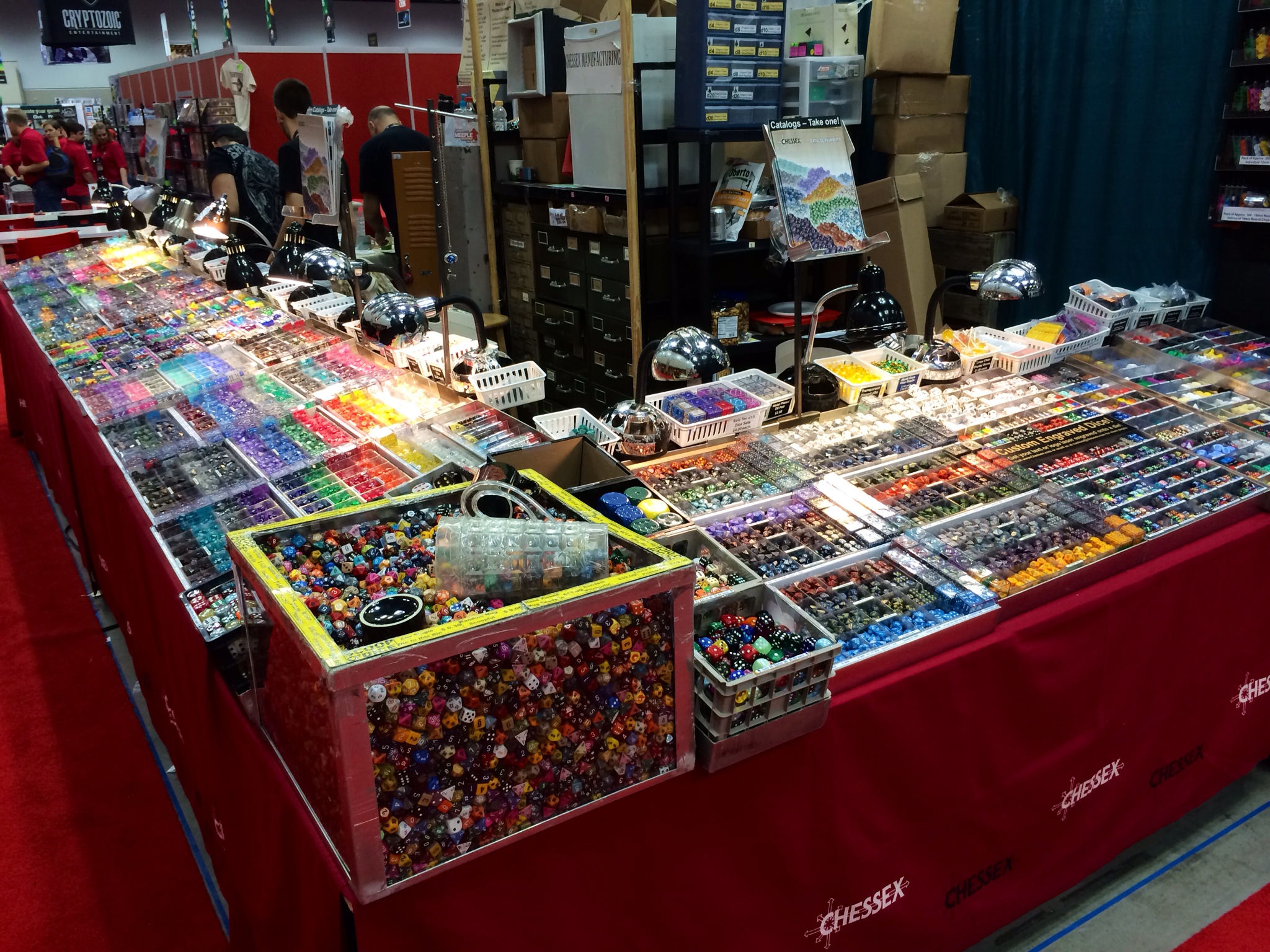 These handheld random number generators come in a multitude of sides and a cornucopia of colors. I myself purchased some extremely large six-sided dice. In
red and blue, in case anybody was wondering. 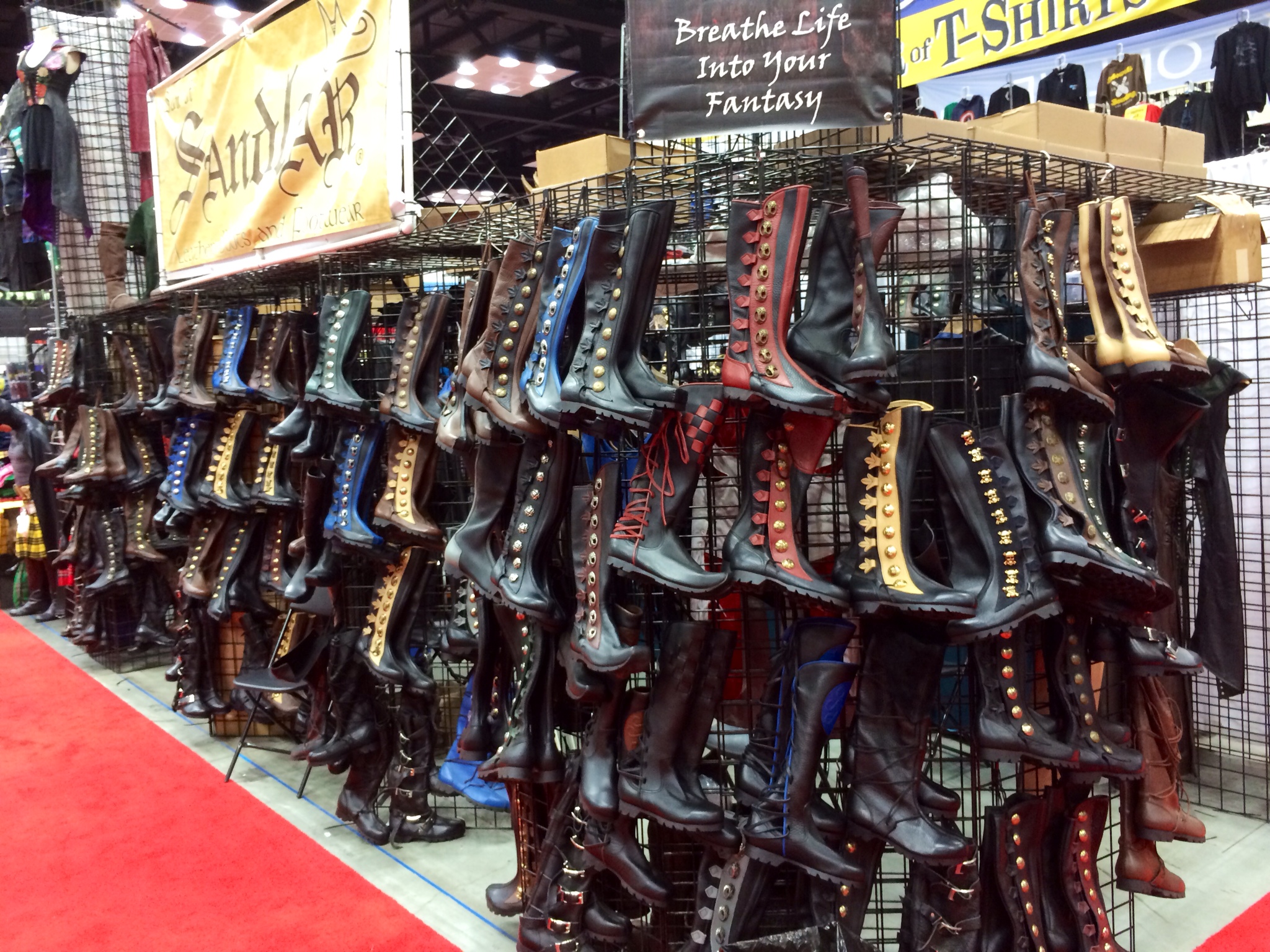 I just picked up some new boots from this Gruul shop called “Ceratok Stock.” Otherwise, this booth would have come in handy (footy?). 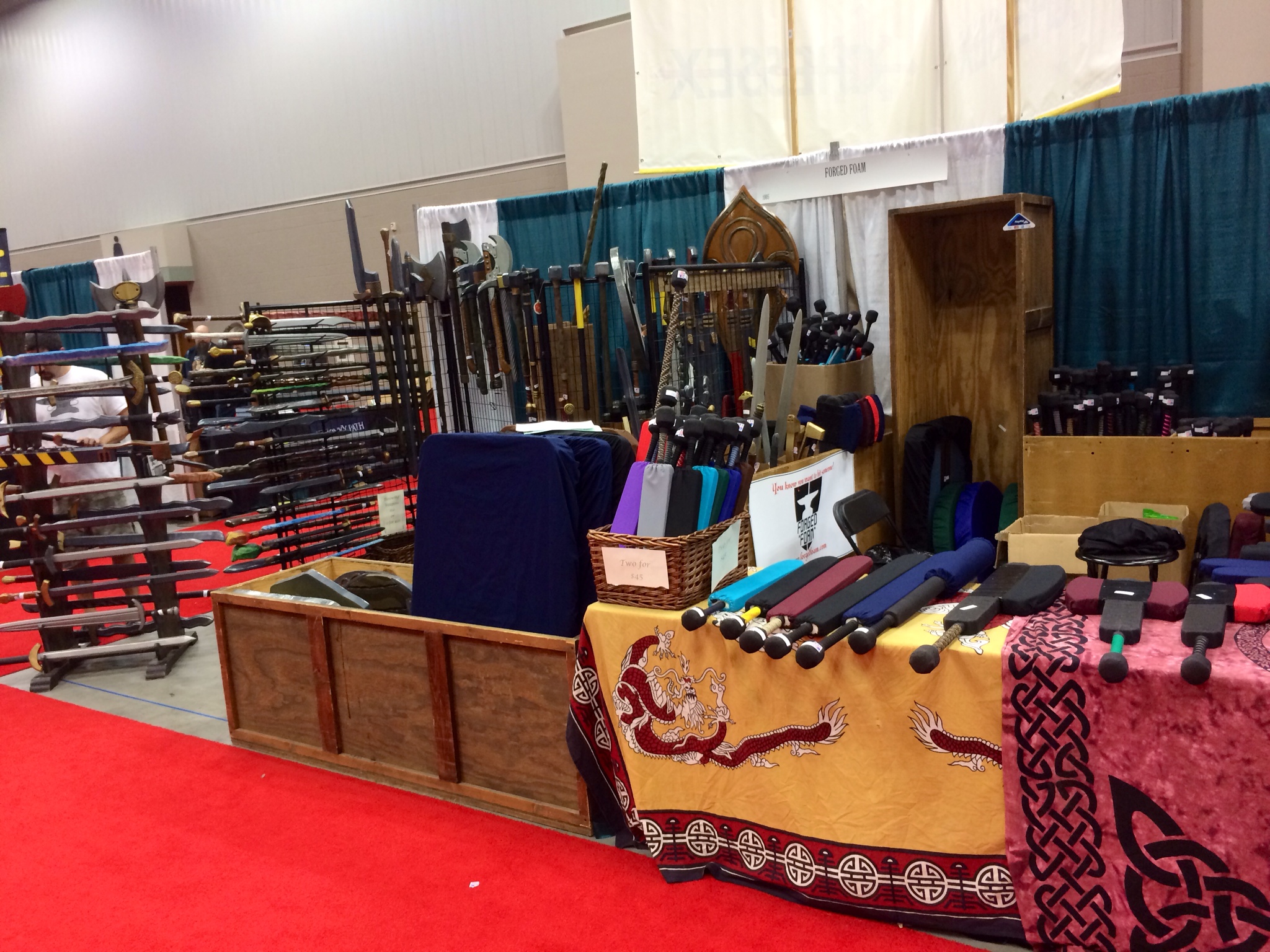 This plane enjoys mock battles, and one can arm himself or herself for casual or “professional” combat in precise Belegarth-approved equipment. Just get
the blue and red ones. 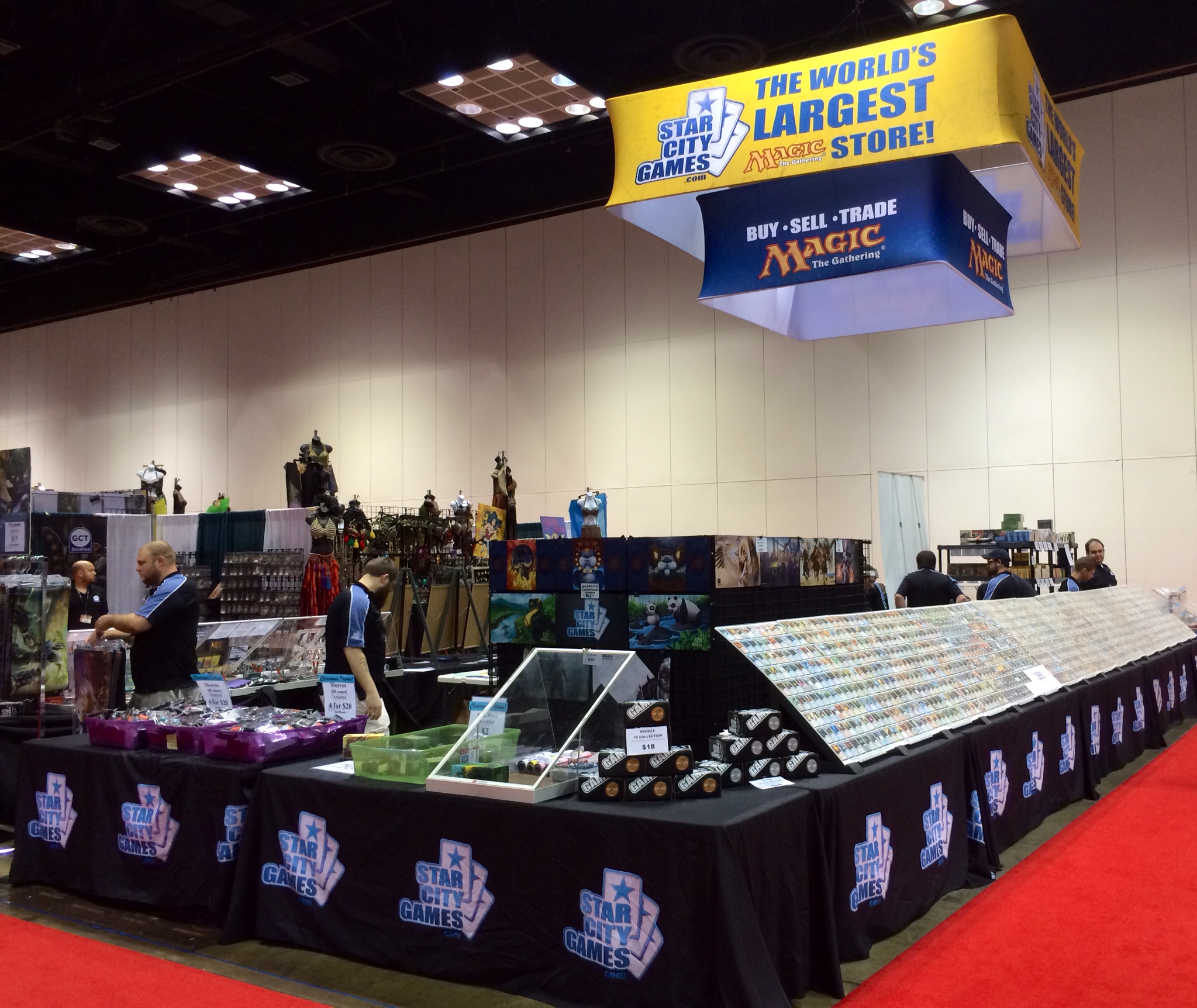 This booth was extremely large and popular. I don’t know why, but I felt a certain attachment to it. It’s like reading about the Katazar-Razblat Elemental
Symposium all over again!

All this was great and all, but let’s not forget about the real draw to this festival: the games. The most popular game known amongst this plane’s
inhabitants is Magic: The Gathering. As such, I shall be comparing my findings with it, much akin to pairing the Nerual Schisatrode and mizzium-sphere
array matrices. 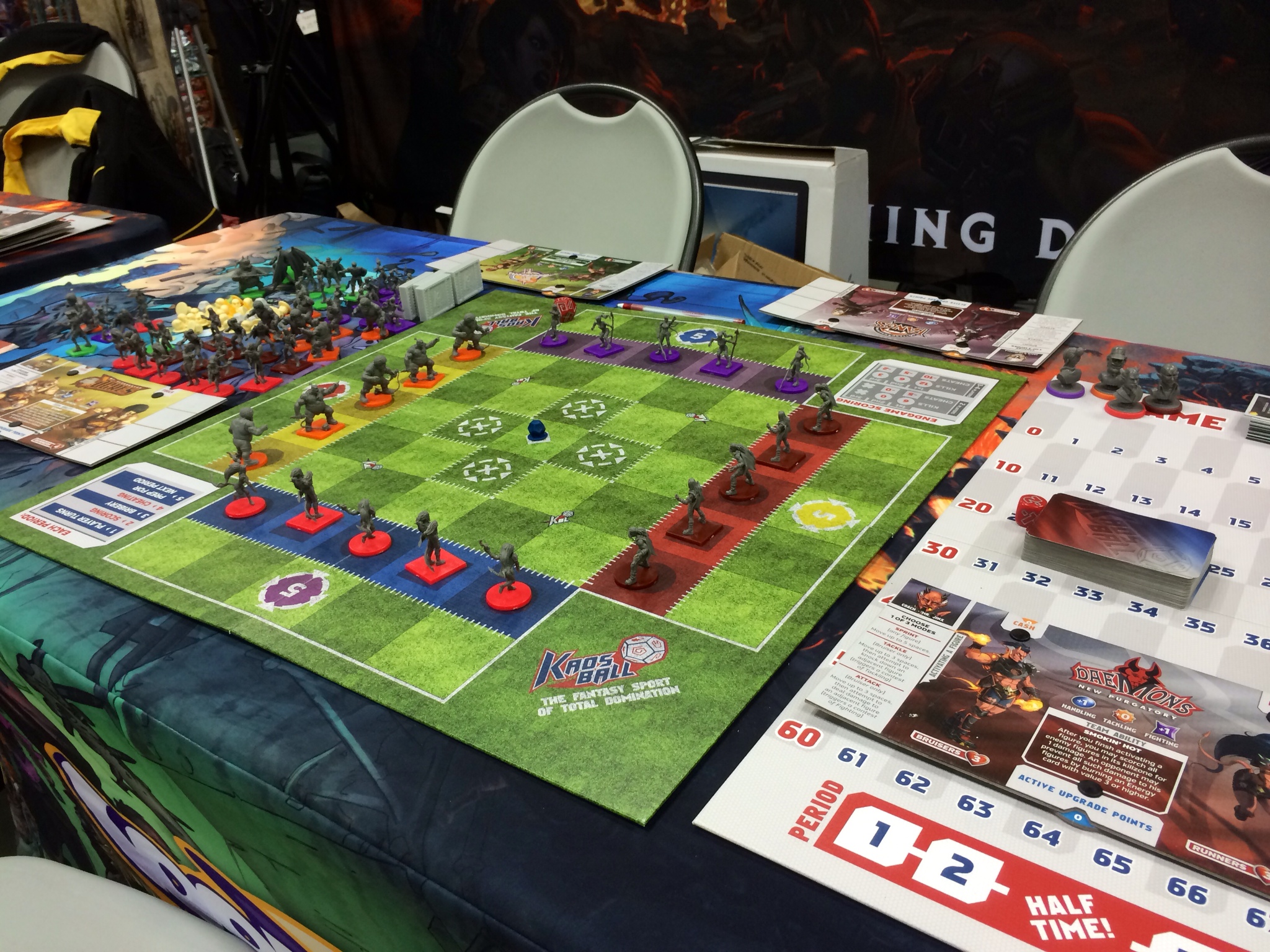 This game is called Kaosball and is an area control and hand management game in the guise of an anime rugby miniature game. Just like Magic, it contains
drafting, which is a critical element of interactivity and replayability. Why do so many people enjoy drafting over and over? It’s different every time,
and decisions are often complex and can matter even toward the end of the game. The very personality of the game, combined with the ability to
myself demonstrate this activity of ball handling, fighting, and high customization of teams and abilities right there on the festival floor, made this one
of my favorites. They even had a “steampunk” team, which look similar to guildmages, just without any knowledge of the Nivian Prime Postulates. 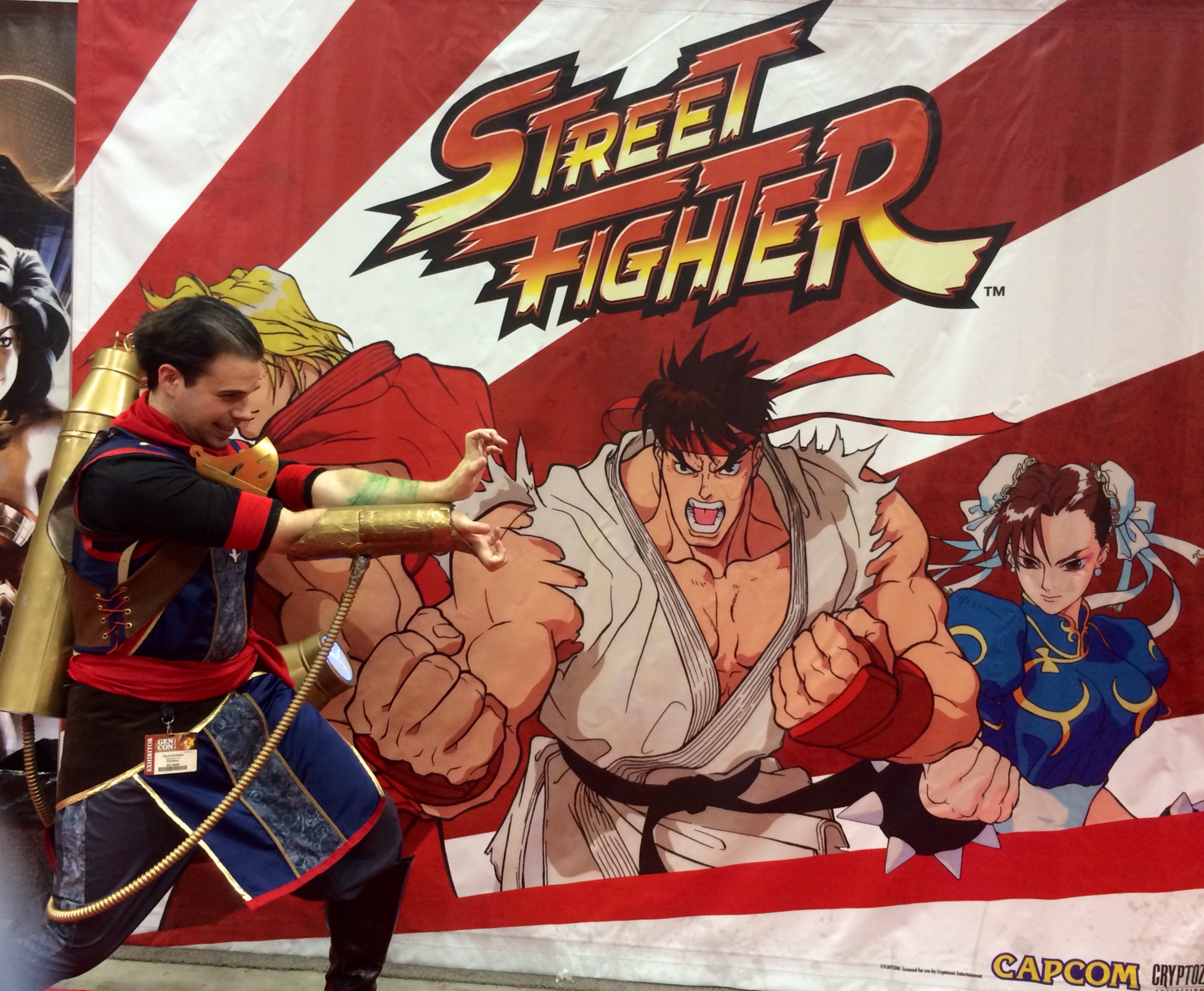 This is a deckbuilding game in which everybody starts off with ten boring cards, and then acquires exciting ones every turn, which allows them to
eventually gain scoring cards to win the game. Before you enter any Magic event, you create a deck of 75 exact cards to wreak havoc. In these games,
everybody is building them simultaneously, which calls for you to predict the metagame on the fly. They are relatively fast and include lots of card
drawing, which in and of itself is a fun thing to do. These games can somewhat get repetitive but can be alleviated with expansions, as in how Magic gets
200+ new cards every couple of months. 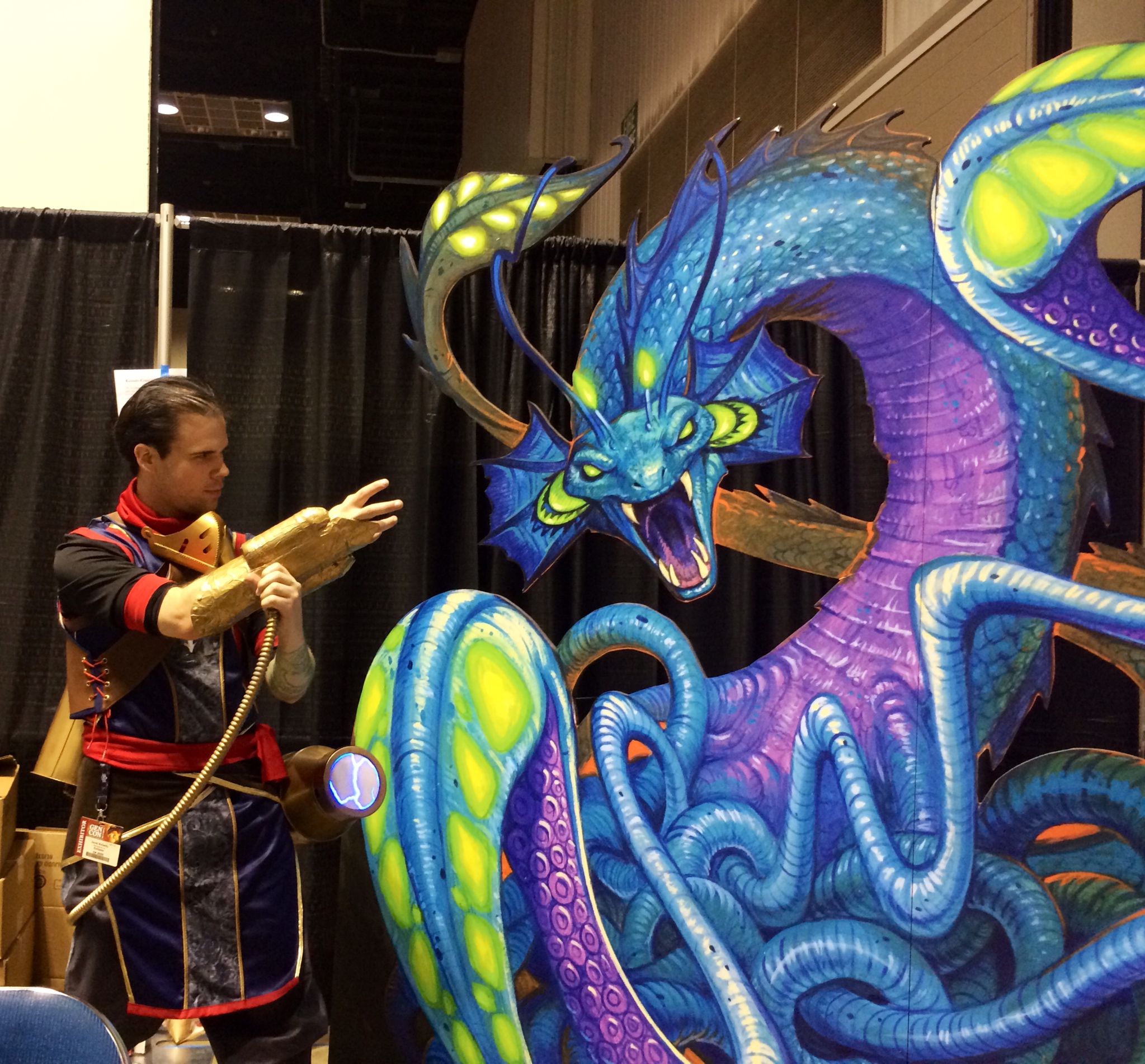 Kaijudo is a game much more akin to Magic but seems to be aimed at a much younger audience. Your life is a more “interactive” affair, and instead of lands,
any card may be played as a similar resource once a turn. While this does remove mana screw, one of the most feared enemies of the Multiverse, think of all
the exciting stories you’ve heard or been a part of regarding Magic. Often they involve drawing the right spell or coming back from an unwinnable board
position. The interweaving of spells and lands makes for a more chaotic, random experience, and thus amps up the likelihood of newer players defeating
experienced players, which is healthy for the longevity of the game. Finding the sweet spot between controlled decisions and random elements in a game is
of extreme importance. That being said, Kaijudo is indeed a fun and well-designed game but contains far more decision-making than what you would expect
from such colorful art. 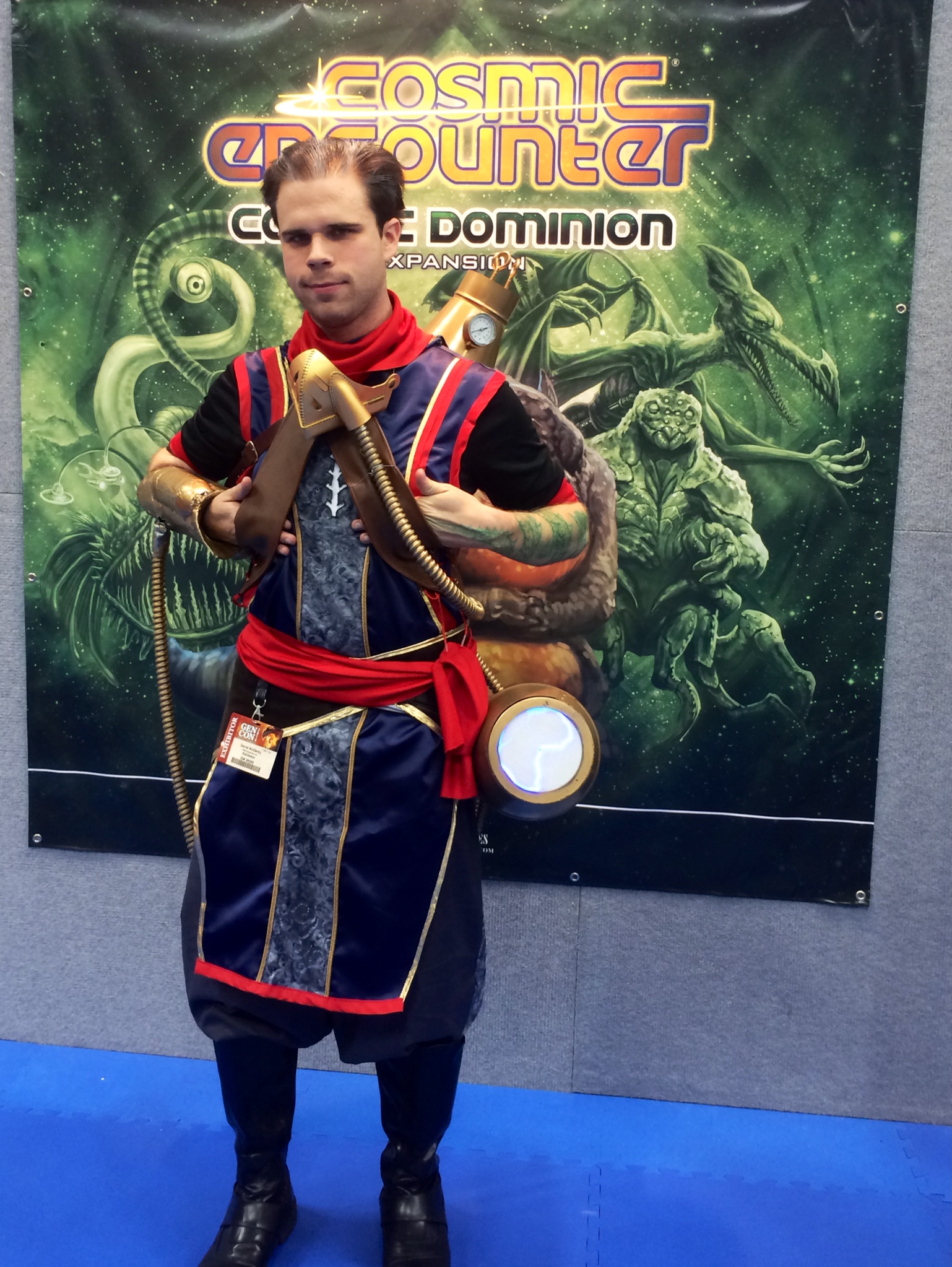 Cosmic Encounter is an ancient game of space politics. I’m not the biggest fan of multiplayer games such as this, as if often comes down to who seems the
least threatening until the very end. Therefore, it’s much less about how well you play and how much of a threat you seem to be. This can
be alleviated with games where everybody is forced to interact with people the same amount, and mechanics where you “help yourselves” instead of “hurting
others.” Even with all this, Cosmic Encounter was one of the main influences for Richard Garfield when he created Magic. Each player race breaks the rules
of the game in one way or another. What if the very playing cards could do that? 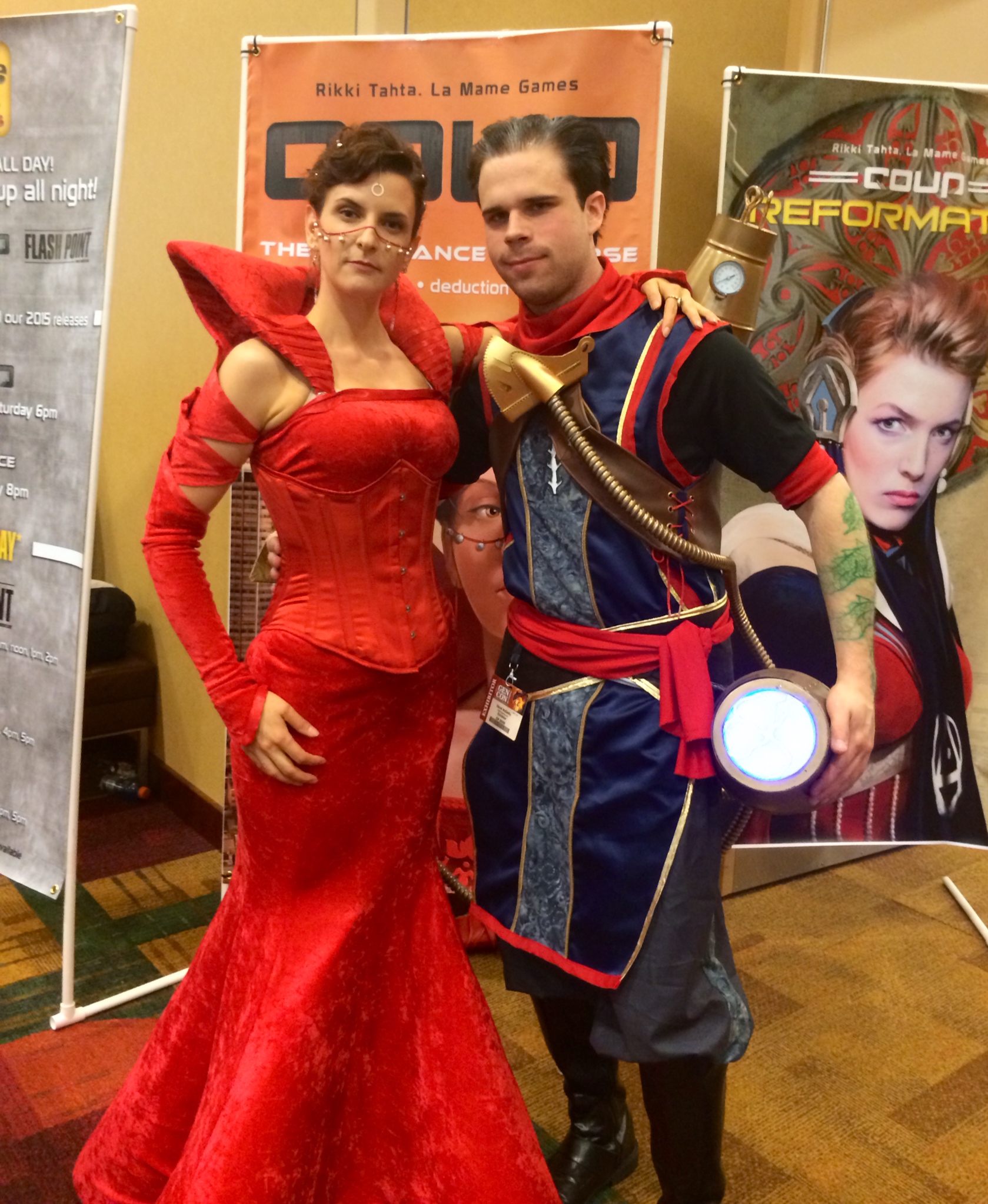 Coup is an extremely simple fifteen-card bluffing game. Each player gets two cards of five different “jobs” and goes about trying to gain currency to kill
the other players one card at a time. Each job allows different actions, but the thing is, you can do any action you want! If anybody calls you out on it,
somebody is going to lose a card, either by you being caught red-handed, or somebody whom you sold your truth on. It’s not only a game of heavy bluffing
but prediction and pattern recognition. In Magic, during playtesting, often you’ll run into the same predicament. Eventually you learn how matchups go, and
you learn what’s really important either in the short or the long term, and you can apply this knowledge during an actual tournament. The skills of trying
to represent false information can also be applied in both games (and games in general). So what if you have two Contessa cards (the pictured woman), or
just an Island and a Mountain? These cards don’t actually give you any real actions to do. But that doesn’t mean you can’t still sow information
that can be used at a later time. Simplicity in a game cannot be understated, much like how electropropulsion magnetronics is the only real theory needed
for a blazekite.

Like I said, this festival contains other objects of interest. I have concluded the need to begin further research on these subjects: 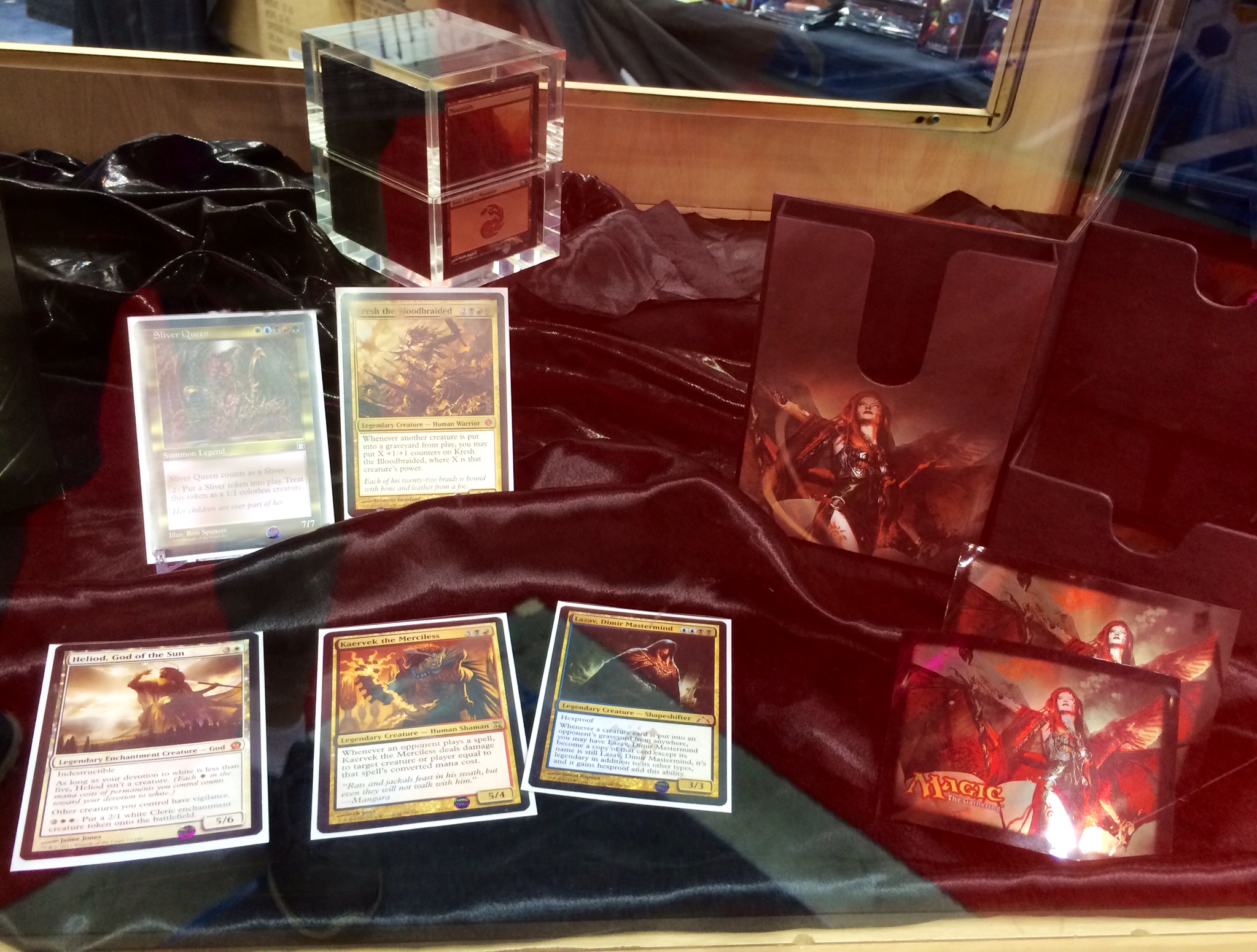 New Magic card protectors? The art depicted is quite the popular character, and I’m sure everybody is
eagerly awaiting their release. 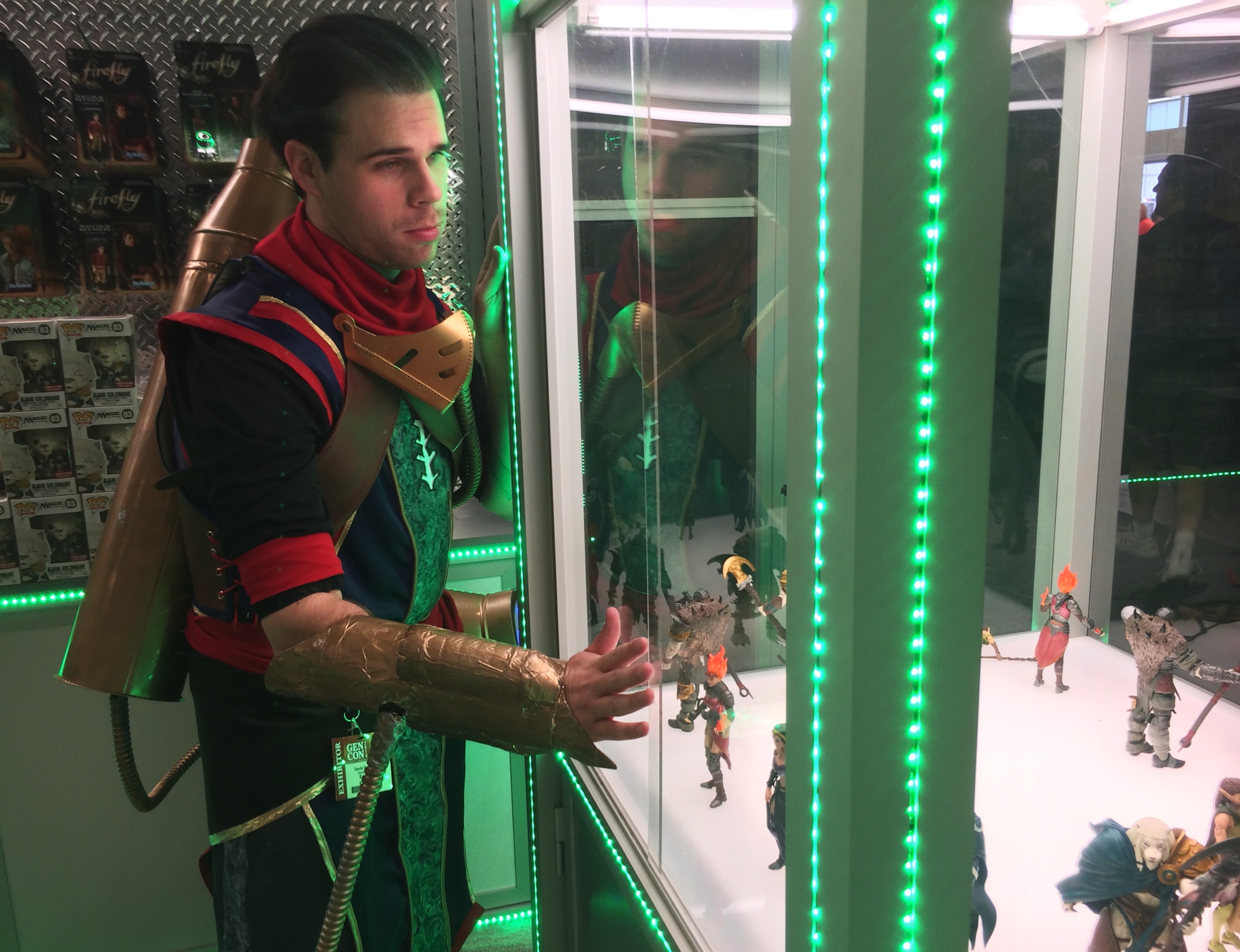 I feel an immense sadness when looking at these, and I hope that one day, a certain steampunk wizard guy can be added to their ranks. Moving on.

I was also able to interact with a plethora of different races and people from all corners of Dominia. This was one of my favorite parts, even though I may
not seem like a people person. A planeswalker’s got a reputation to keep, ya know? 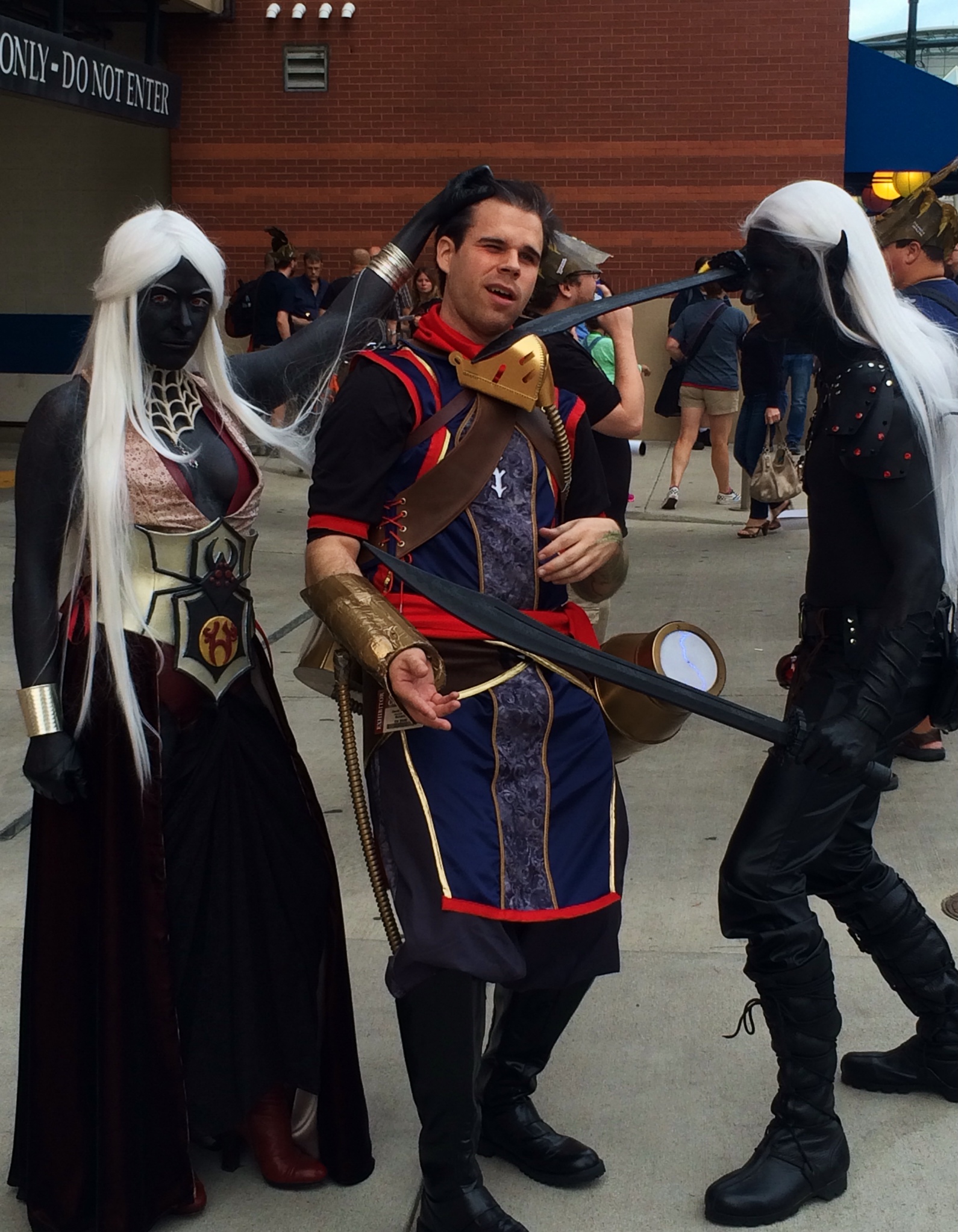 Wizards of the Coast held a gathering for the newest edition of Dungeons & Dragons. I apparently wondered at bit too far into The Underdark and didn’t
heed the sign seen in the background. 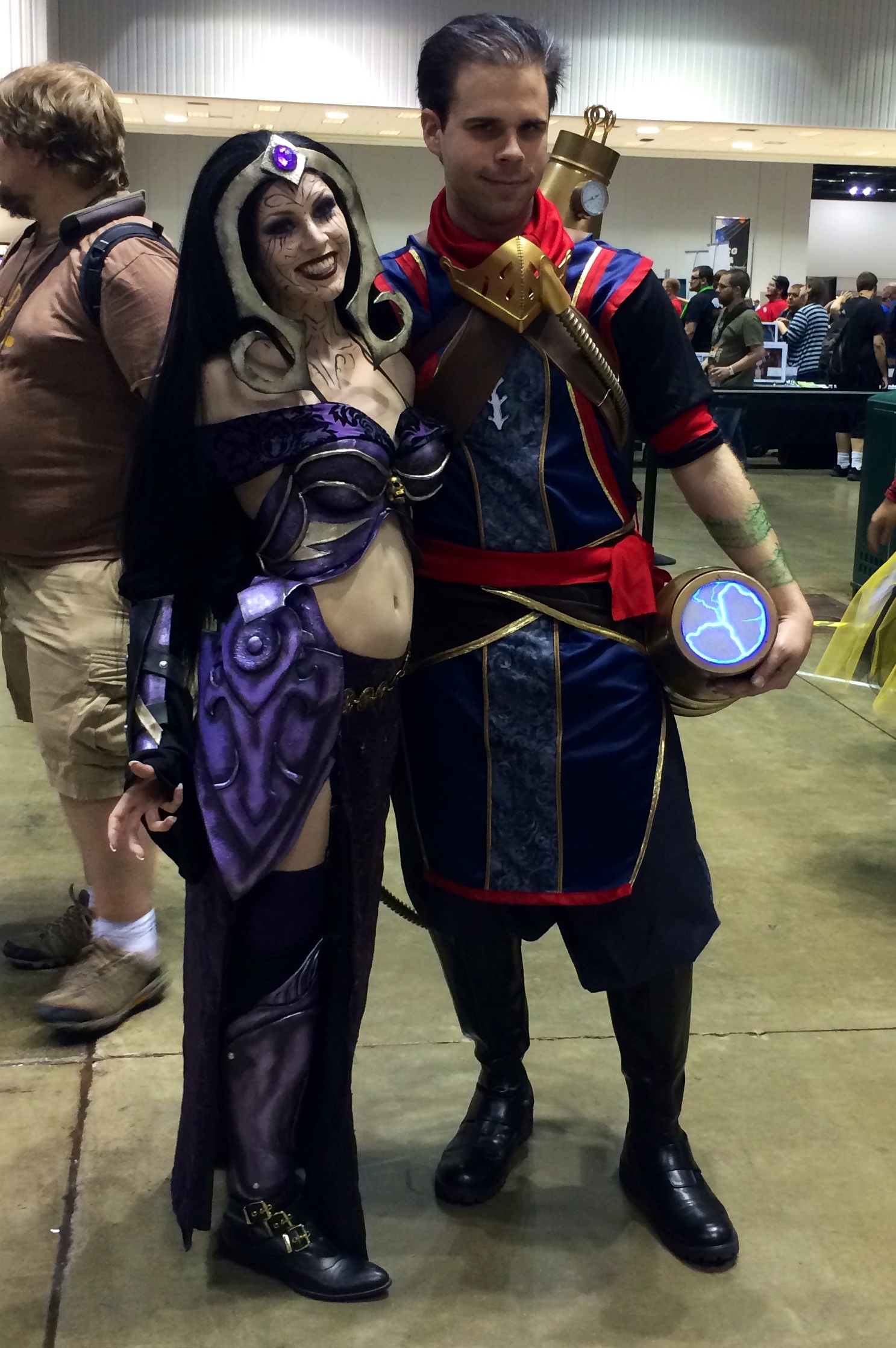 Finally, a fellow Planeswalker! Despite what I’ve heard about the necromantic Liliana Vess, she seemed extremely friendly and was a genuinely fun person to
interact with. She almost seemed to be more associated with white mana then what her clothes would convey. Do people ever dress in colors of mana they are
not proficient in? 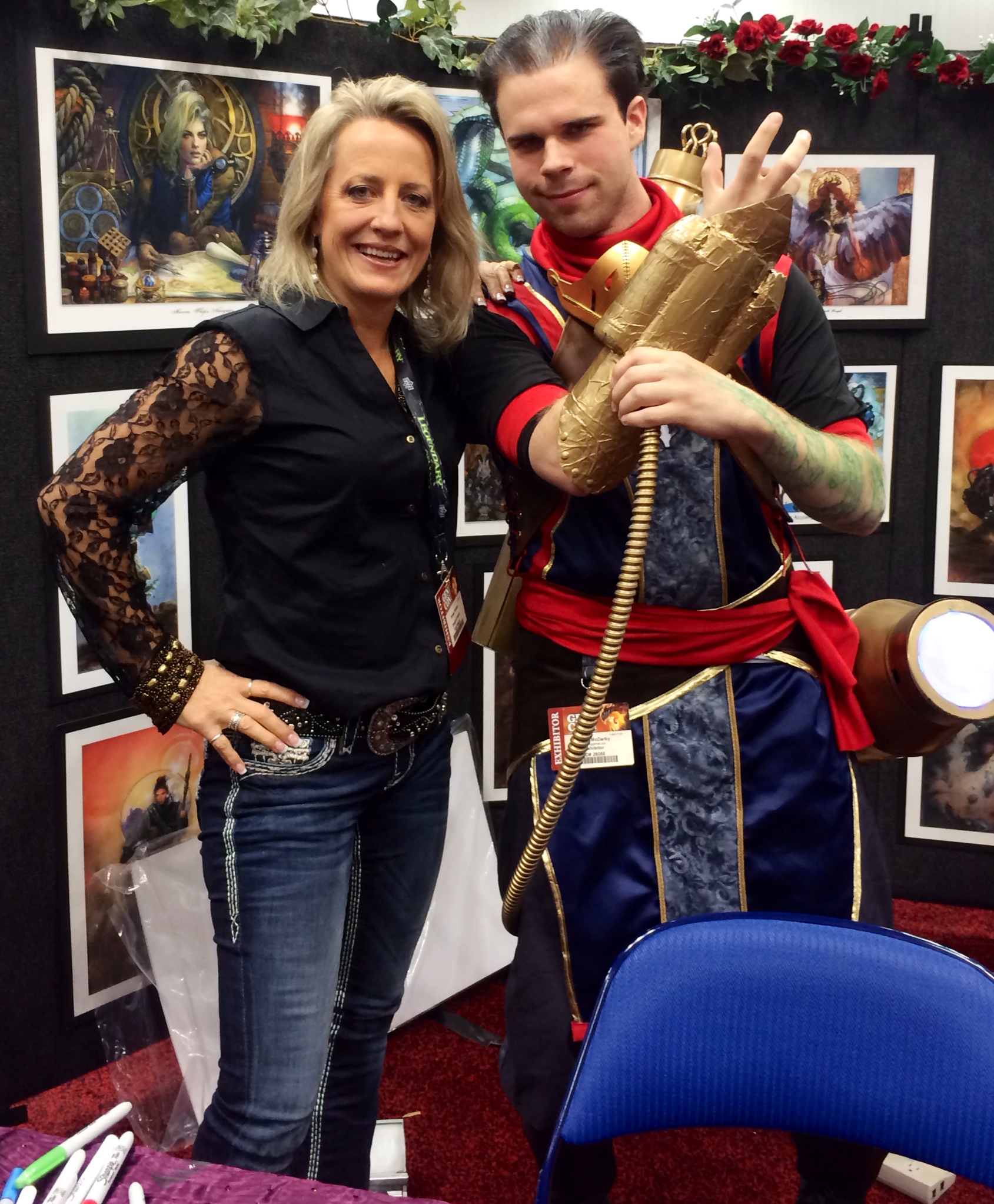 She seems to be a creator of mine in some way, and her artistic Genius was unbounded. I was Blasted away by her work. 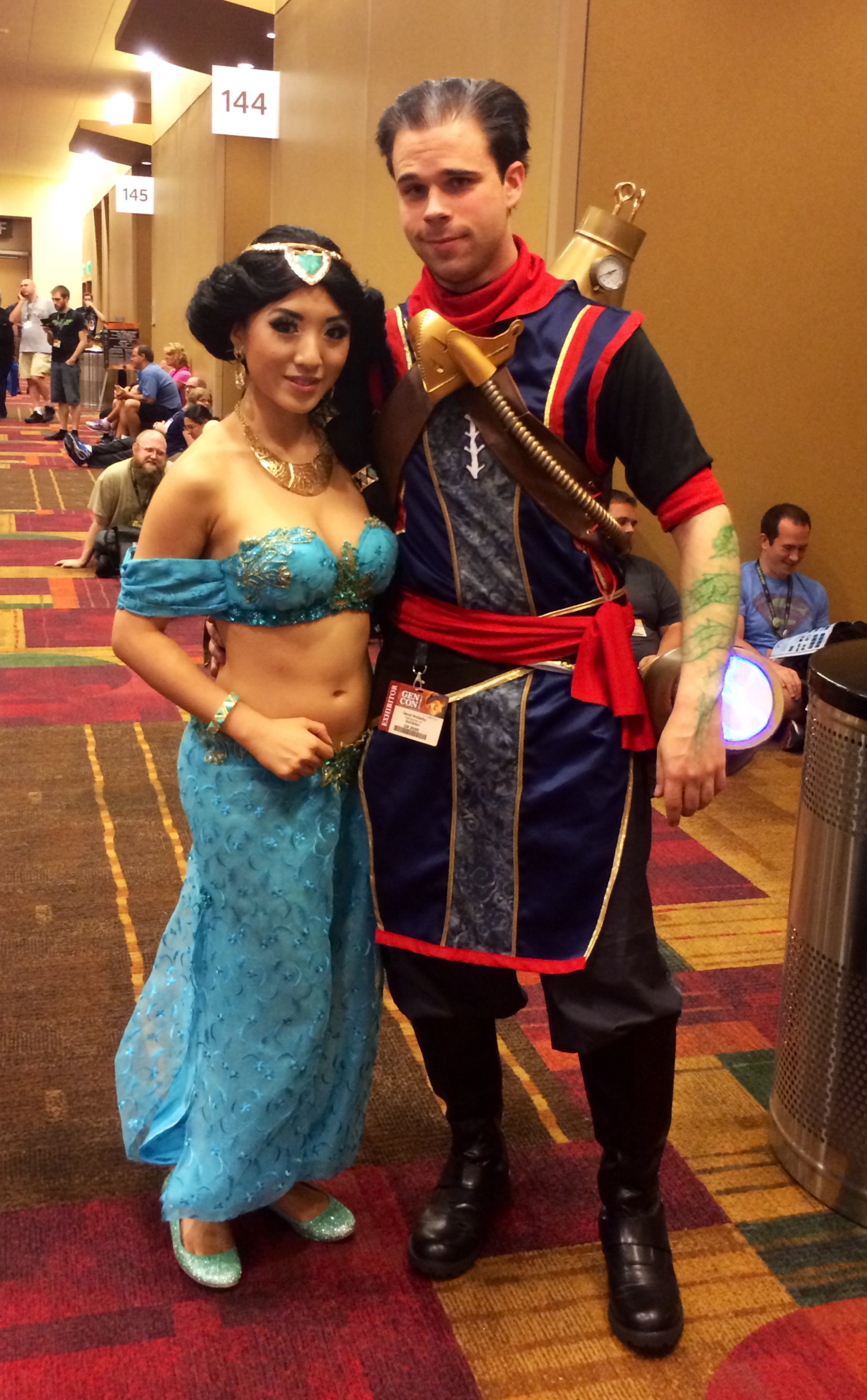 One thing I enjoy about my life is the ability to see A Whole New World whenever I want. 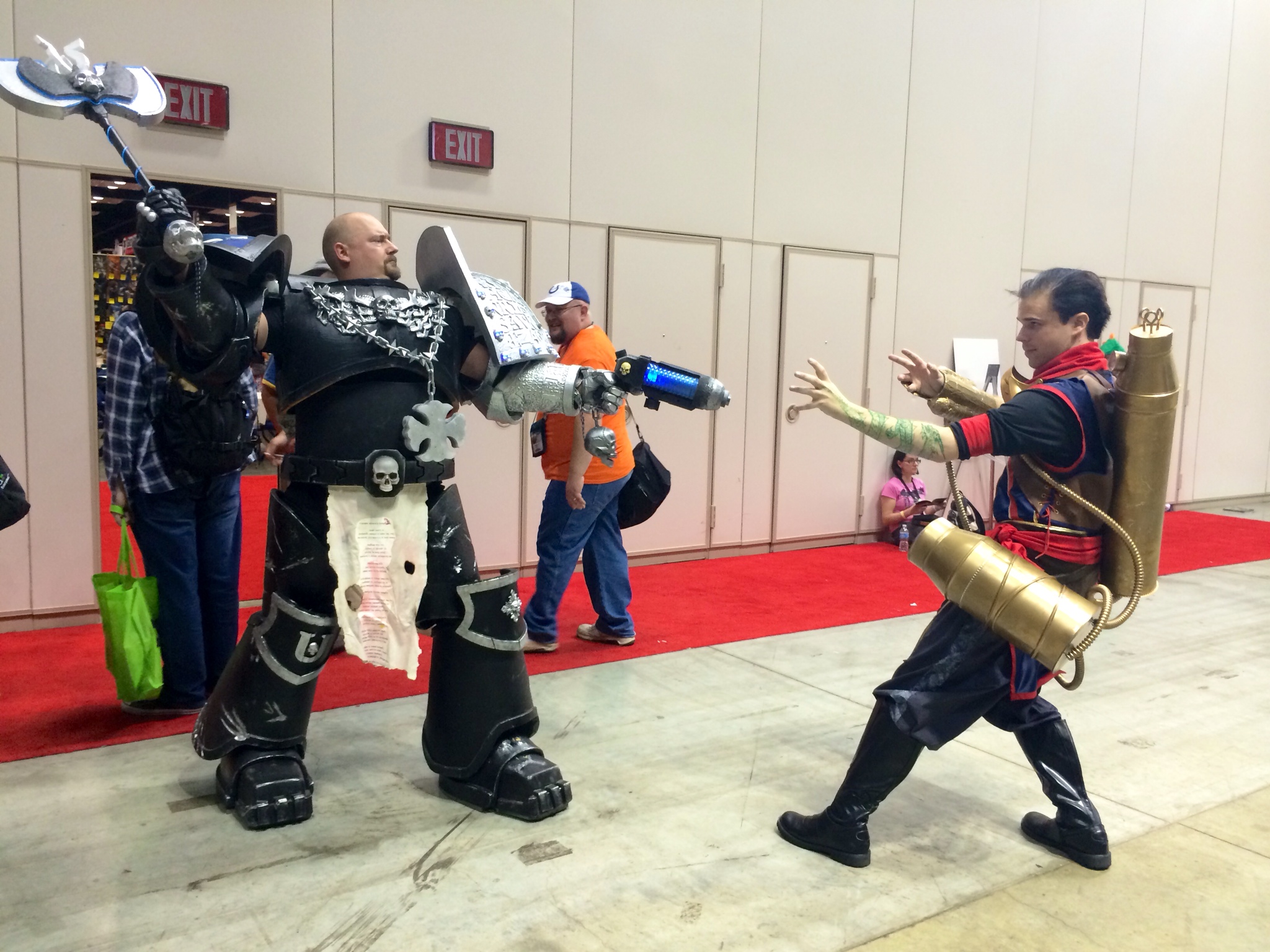 Of course, not all encounters are friendly. This one kept shouting “For the Emperor!” as he charted me. Thankfully most armors are made of metal.

And thus, concludes my research notes on this subject. Even I cannot hide my absence from the Dracogenius indefinitely. While I’m not entirely sure what
results these findings will yield, I am certain they were vital in some way to something or somebody out there. The Multiverse is diverse, and it in are
games of all shapes and sizes. Understanding Magic can help you understand other games, but it is a two-way street. Broaden your mind and dive into the
unknown; this isn’t just Izzet-minded ideology. It’s cross-guild axiom of intangible importance. You’ll be glad that you did.


The rest of the pages are either blank, charred out, or wet with an unknown substance. All this talk of games and weird creatures clearly must be a
work of fiction, even as convincing as these pictures are. There isn’t any place like that on Ravnica that you’ve ever heard of, and even if there was,
you don’t have time for such nonsense; you suddenly remember your charge was delivering a letter to the Embassy of the Guildpact. But just as you turn
around back from the direction you came, you sense that you’re quite alone in what used to be a bustling thoroughfare. The sky darkens and a clap of
thunder would have scared you if not for the voice that came with it, laced with impatience and scorn. ”

I believe you have something of mine…”