Some decks are inspired by the commander. Other decks use a commander to support the strategy, but it is not central to the goal. Some decks straddle the line between these two approaches. My Dromoka, the Eternal deck is an example of this type of deck. The deck functions, but the commander enables the deck to perform better. 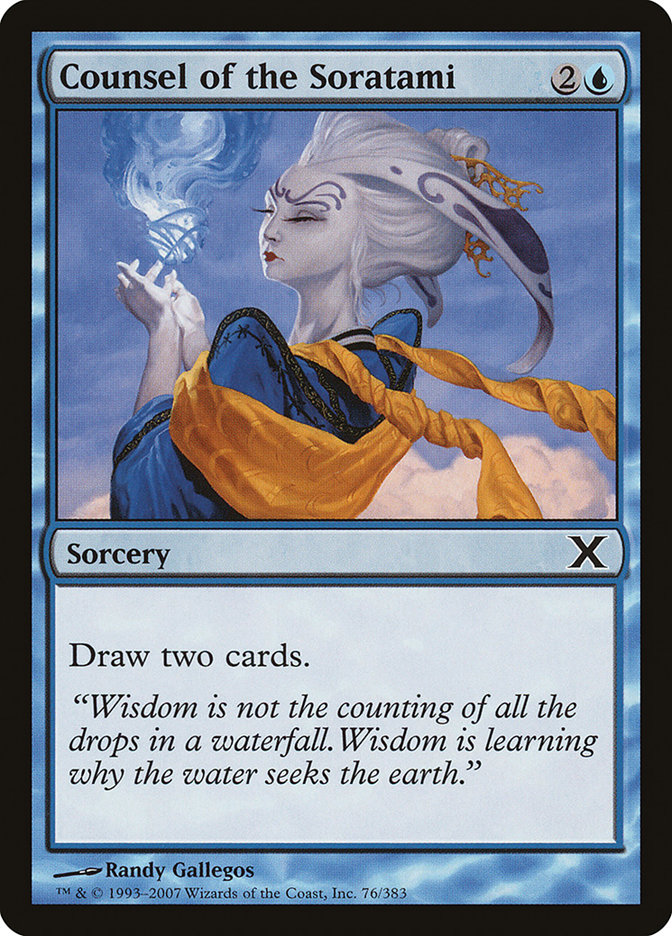 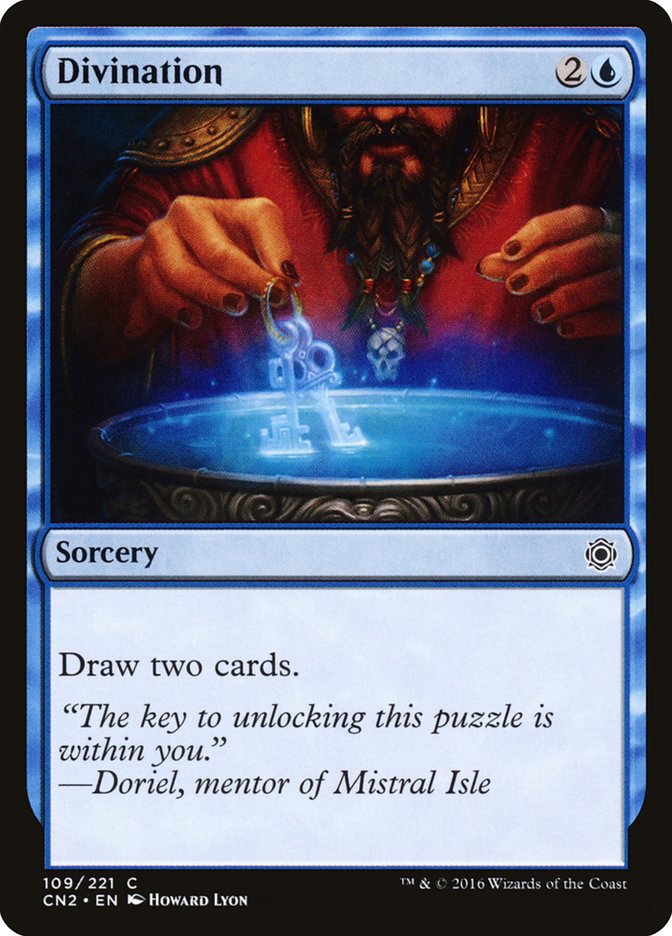 My deck started as a thought experiment. The basis was this: is it possible to make a viable Commander deck with every card consisting of functional reprints? I wanted a deck full of pairs of cards. If I played Divination, then I would play Counsel of the Soratami to make the pair. I wasn’t sure which colors seemed best, but green and white have many functional reprints and color shifted reprints.

I started checking which possible commanders interested me, and G/W caught my eye again. There may be other combinations that work better for this deck, but I was set. The only thing that would change my focus for the deck would be card availability. Some pairings are easy, like Llanowar Elves and Elvish Mystic, Cultivate and Kodama’s Reach, Neck Snap and Divine Verdict. For this deck I counted colorshifted reprints; Naturalize and Disenchant count as a pair for this deck. Some slight changes would count as well, such as Kodama’s Reach having the Arcane subtype where Cultivate does not, or the change on Armadillo Cloak with Unflinching Courage. This now gave the deck some more solid options. 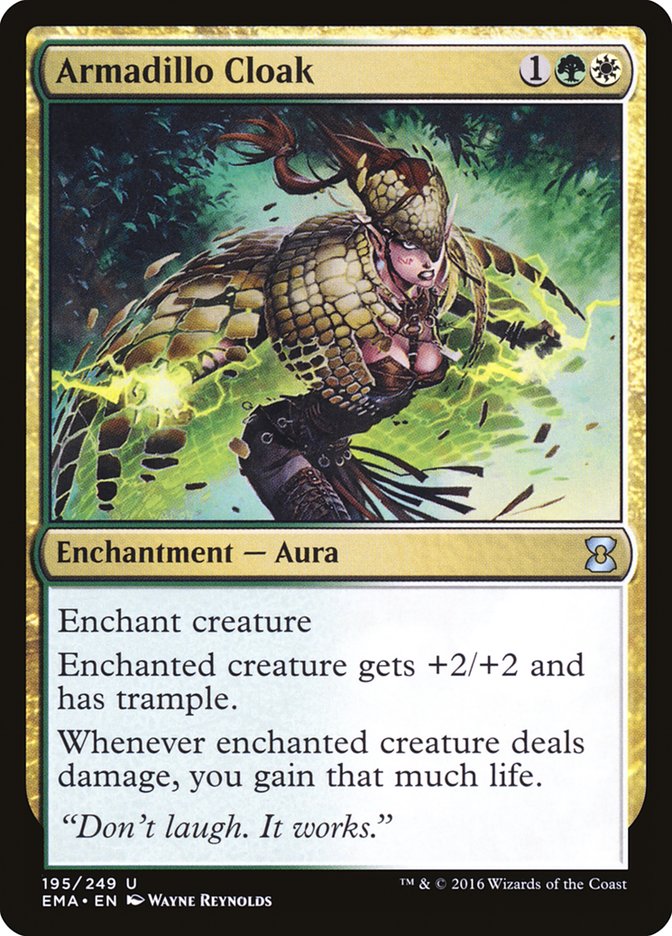 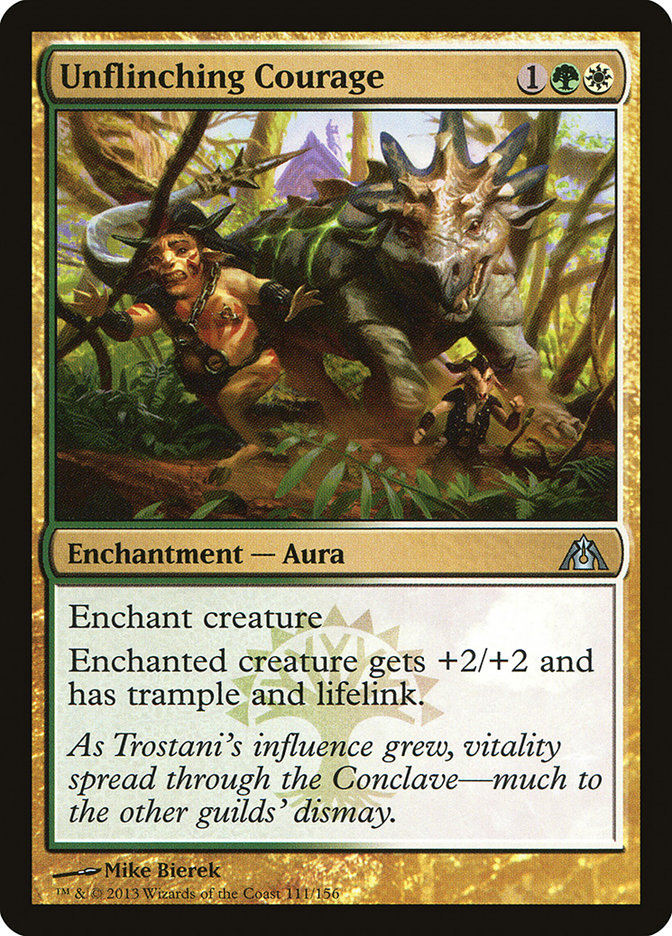 Armed with a big list of cards, I dug through my boxes and boxes of cards. Fun fact: most functional reprints aren’t rares or awesome cards. Instead the reprints tend to be commons and utility pieces. So basically, I dug through all the reject boxes that I have accumulated. I started gathering cards and building my deck.

To make the math work, I settled on 37 lands. This left 62 cards for the deck. Each card would have a pair, so I needed to find 31 cards with functional reprints. This was actually easier than would be believed. The trick was finding cards that weren’t just Grizzly Bears variants. 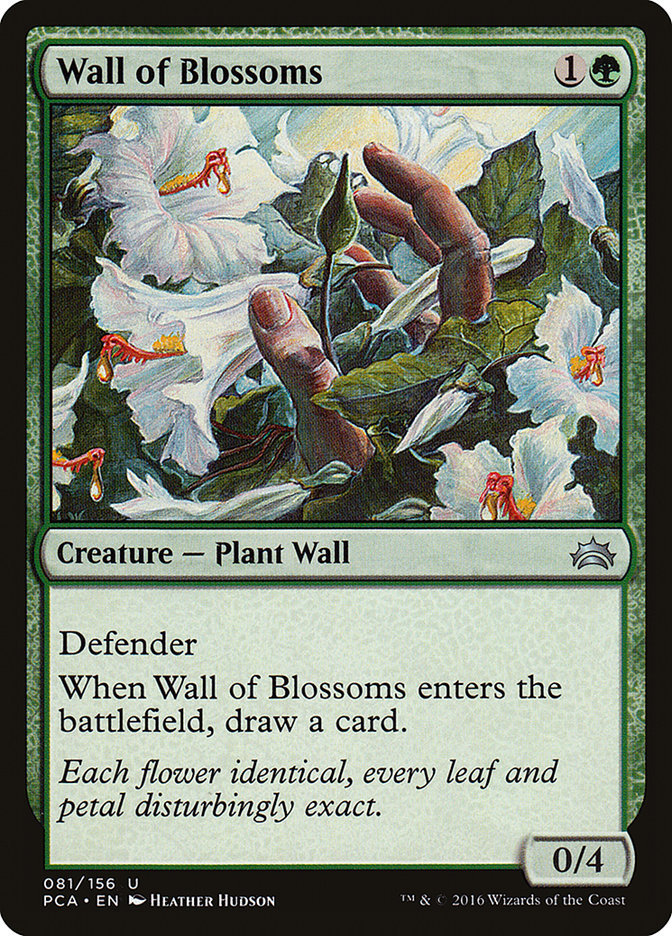 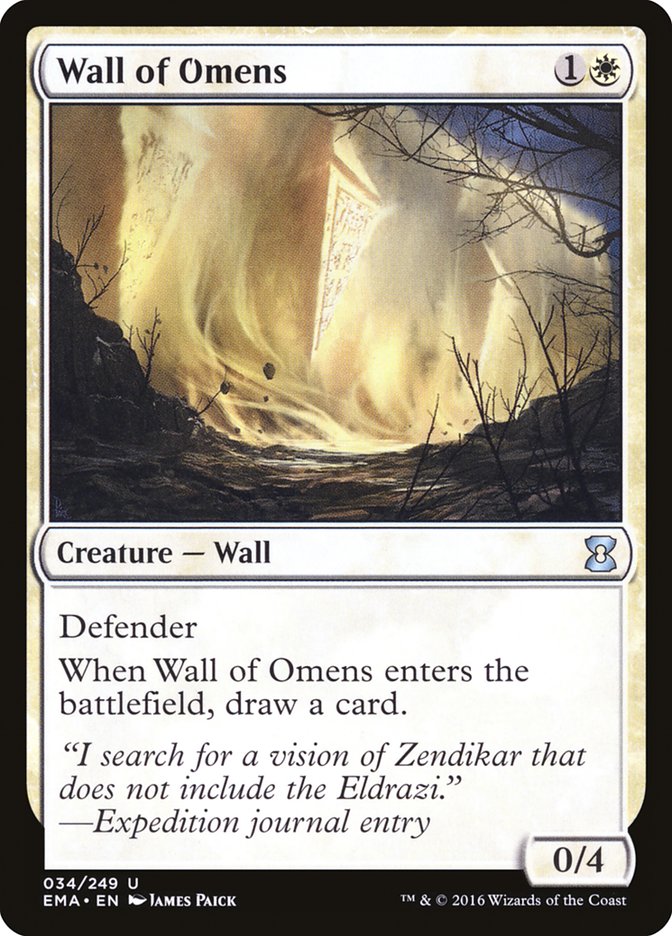 The challenge with the deck was actually a surprising one. It wasn’t establishing battlefield presence or removing problem cards. The challenge was the complete lack of card advantage. It’s the main reason I have the Wall of Omens / Wall of Blossoms and Striped Bears / Shaman of Spring. Stampeding Wildebeests/ Stampeding Serow can reset them. This was about the best bit of card advantage I could muster. The green bounce effect also supported Ironshell Beetle / Satyr Grovedancer and some other small support bits. 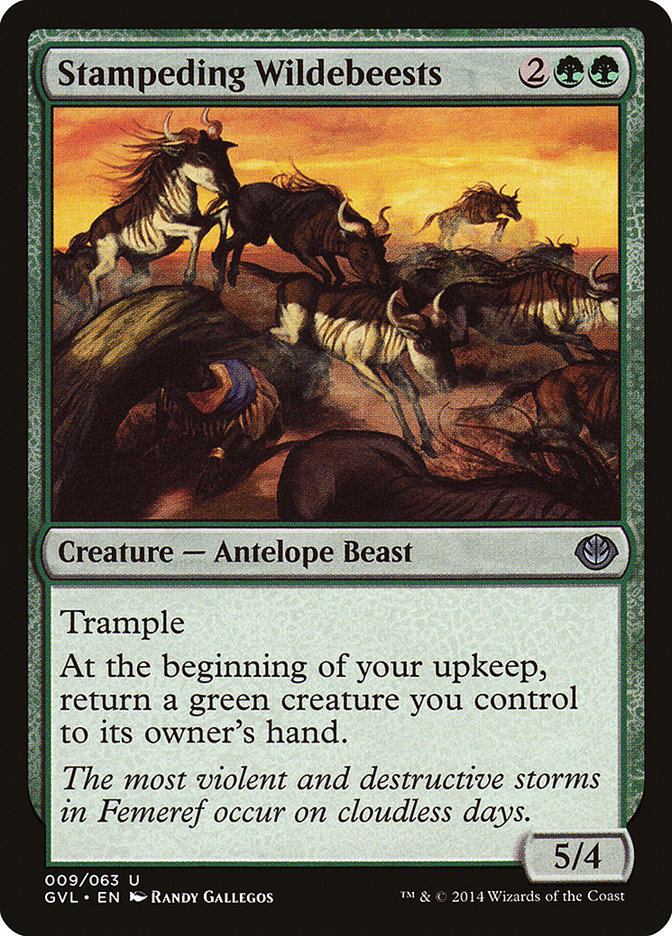 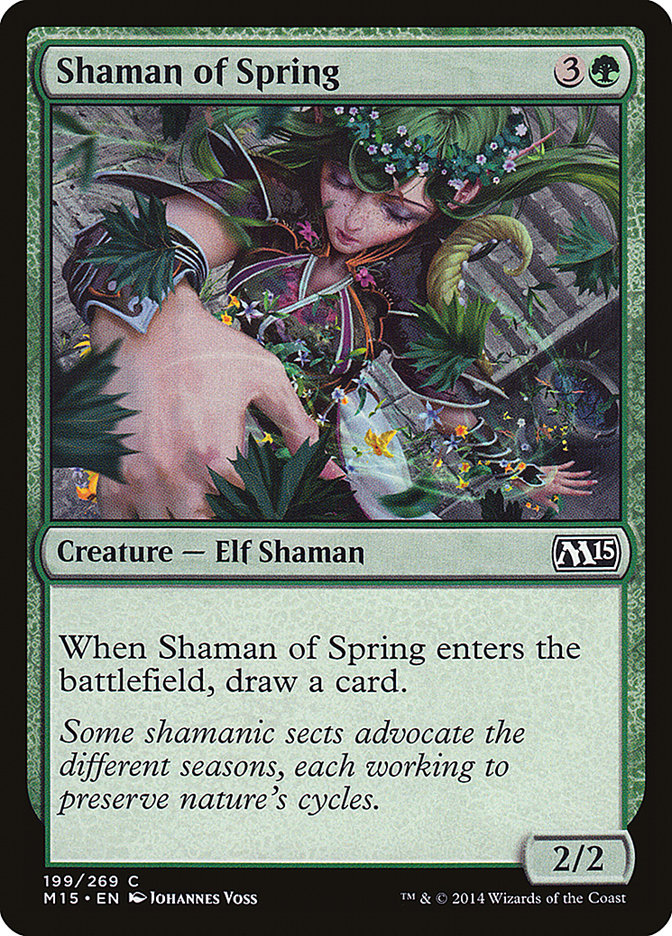 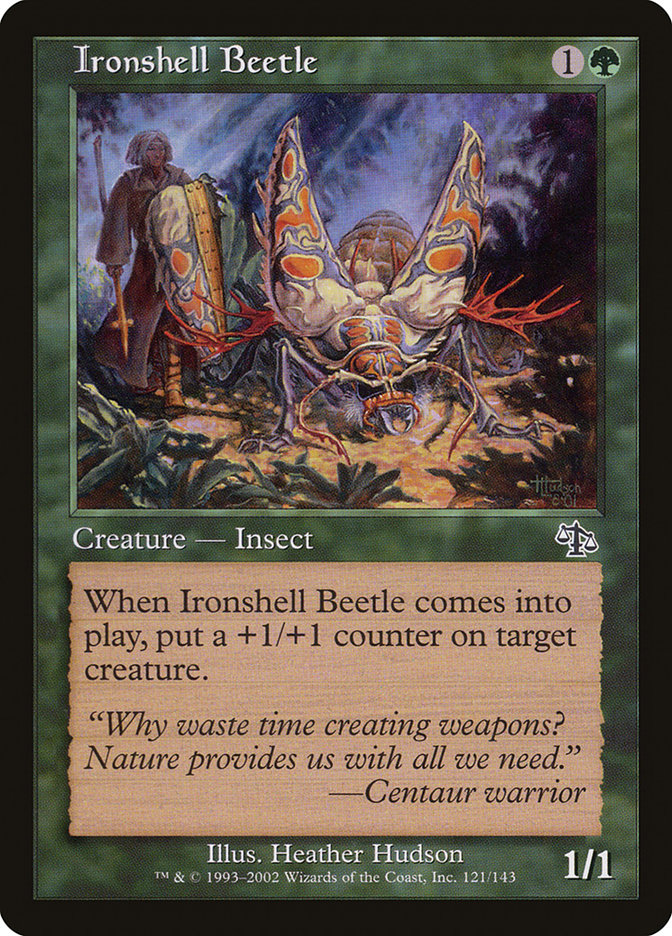 The deck still struggles with card advantage, which made my choice of commander matter more. Dromoka, the Eternal can get me into a game with no other battlefield position; other Selesnya commanders didn’t offer the same options. It’s a good feeling to have Dromoka, the Eternal as a backup plan.

The first step towards making the deck work was making the mana work. A few mana creatures and ramp spells help, like Llanowar Elves and its reprint in Elvish Mystic. But the real powerhouses are Fyndhorn Elder and Greenweaver Druid combined with Kodama’s Reach and Cultivate. Getting to five mana means I can usually play two spells a turn. It also means a missed land drop is a rough turn, not something that puts the deck devastatingly behind. 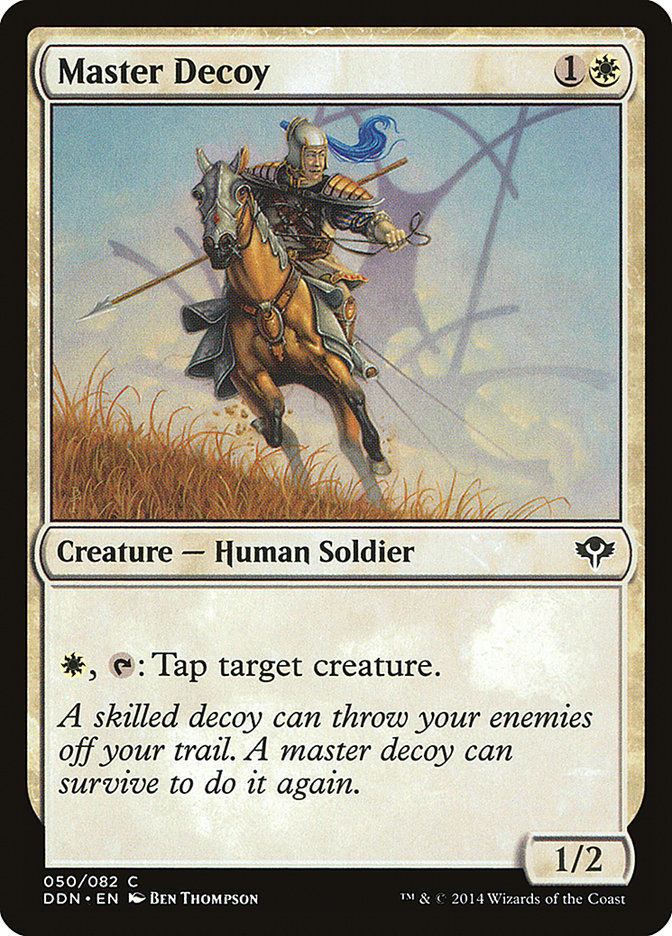 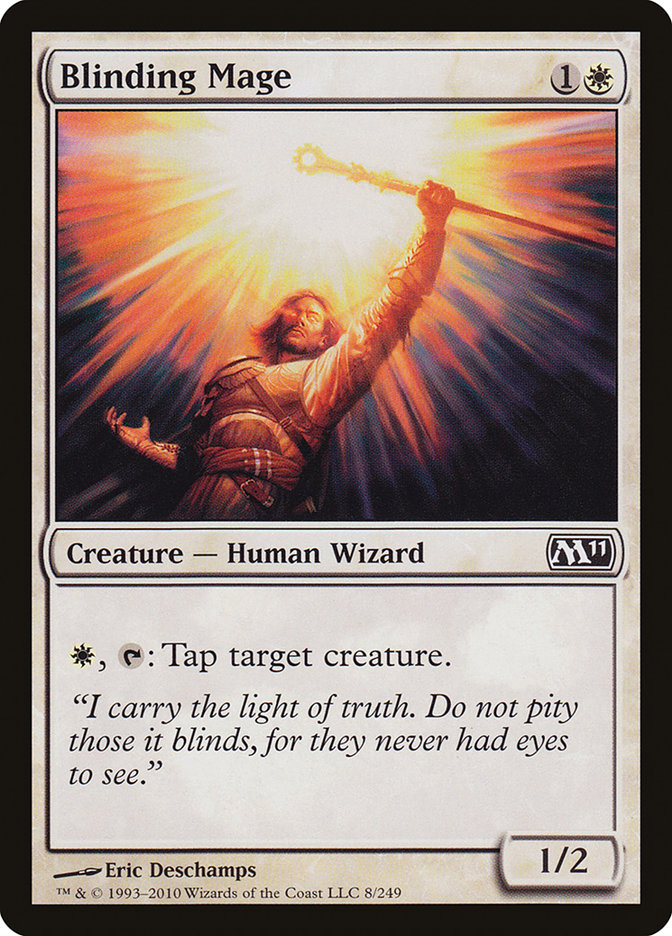 The next step was adding a good mix of removal options for creatures and other permanents. For this, I counted tappers like Master Decoy and Goldmeadow Harrier and their counterparts. Keeping a big scary creature locked down is almost as good as getting rid of it. Green and white are particularly good at dealing with artifacts and enchantments. Using Disenchant and Naturalize, Seal of Cleansing and Seal of Primordium, Indrik Stomphowler and Conclave Naturalists provides several options. I even have catch-all answers like Oblivion Ring and Banishing Light.

For the deck, I stretched the functional reprint policy a bit. Colorshifted cards like Soul Warden and Essence Warden help fill in the deck. Mixing in mostly functional reprints with small template changes helped as well; otherwise I wouldn’t have Unflinching Courage and Armadillo Cloak. The rest of the deck was just cards I liked. Suntail Hawk and Pegasus Charger have partners to take to the skies, while Giant Spider and Towering Indrik hold back the ground-pounders. Giant Warthog and Moss Kami provide large bodies that Commander almost requires.

Most of the deck is just little things that work. When a deck is low to the ground with a mana curve, you can get a surprising easy start. The deck is in the casual tier of Commander but has performed very well against more powerful decks. Many times Commander players focus on huge splashy plays and synergies that durdle into something powerful. Sometimes you just need to get lean and focus on the basics. Efficient creatures backed up with some pump effects can pressure opponents enough to allow the deck or someone else to punch through. 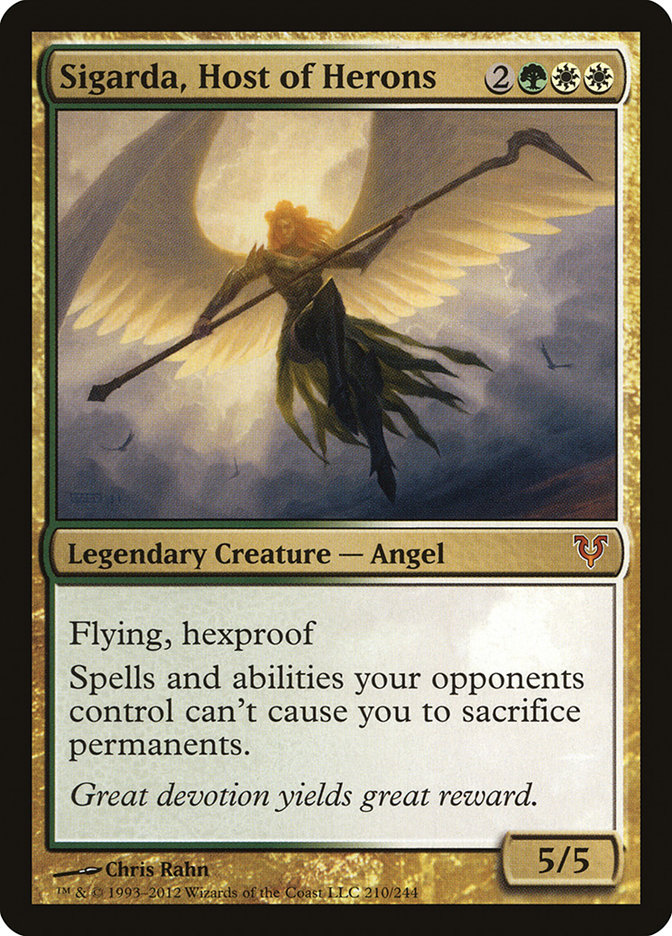 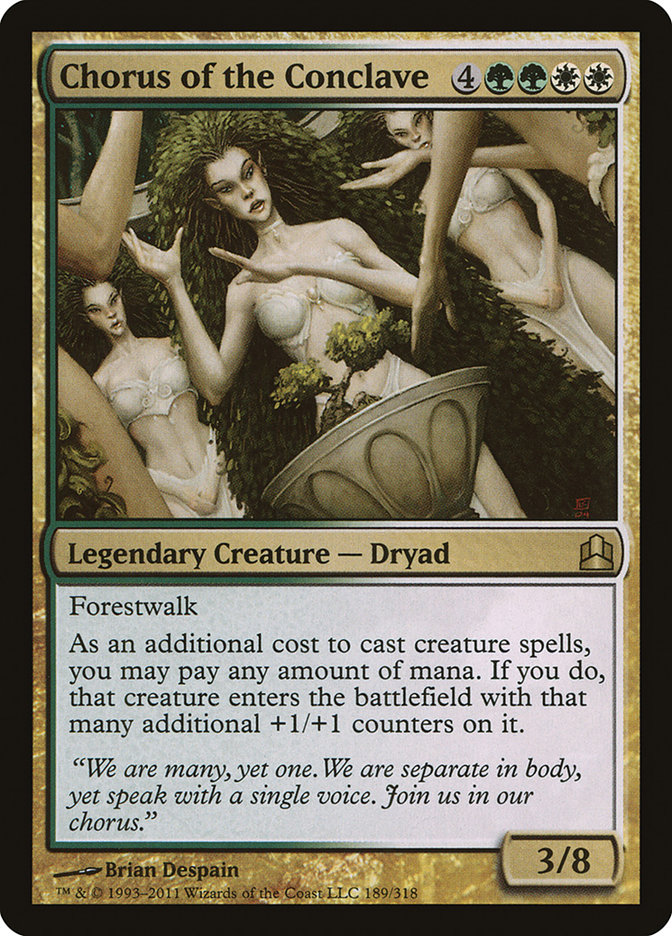 There are many powerful commander options for a G/W deck. The Selesnya pair has loads of great commanders. Originally I was looking at Sigarda, Host of Herons, but she did nothing to aid my functional reprints. The sacrifice prevention is nice, but I wasn’t facing Grave Pact effects too regularly and the ones I did see weren’t too troublesome. She may be among the best Selesnya commanders, but not for this deck. Sigarda, Heron’s Grace is similarly less than helpful in the deck.

Dragonlord Dromoka would do very little. Do you want to counter Suntail Hawk? If so, I consider it a win. Lifelink is nice, but I wanted a commander that can support all the functional reprints. To support the janky creatures in the deck, Chorus of the Conclave could certainly be useful. However, the mana cost is prohibitive. I can dump a ton of mana to make Suntail Hawk a behemoth, but only after I cast an eight-mana creature and untap. This is too risky for me. 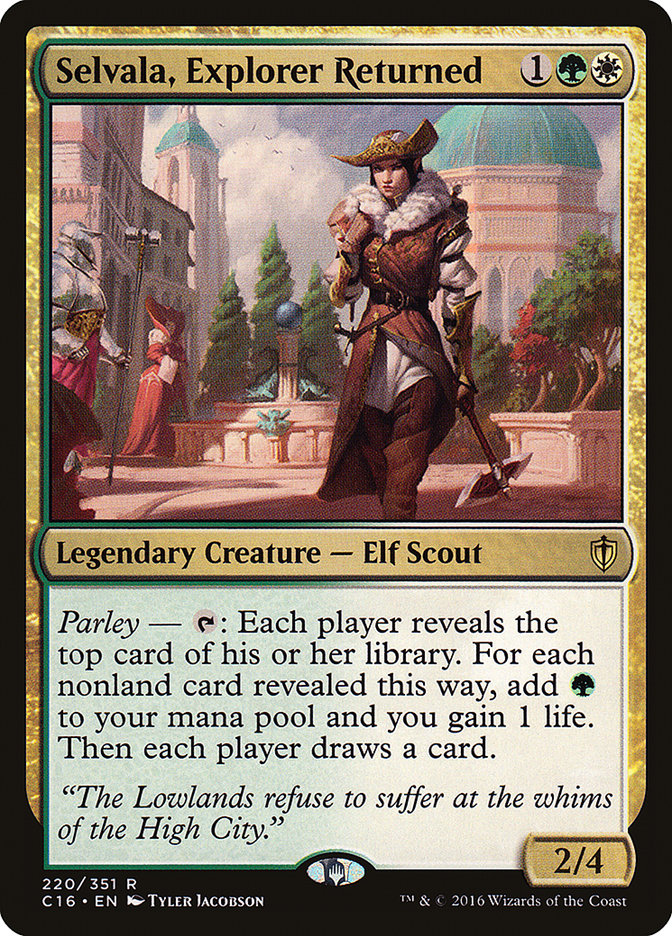 Selvala, Explorer Returned was another strong choice. The mana would be beneficial, but I really was looking to use parley to help make a buffer against my opponents via cards for everyone and lifegain for me.

The other main option was Dromoka, the Eternal. Her bolster effect would enable me to turn Suntail Hawk into a 3/3 flyer. Flying 3/3 creatures win games in Legacy, and I can work with a small army of 3/3, 4/4, and 5/5 creatures. Dromoka also provided a plan B for the deck, as she could bolster herself if I had no battlefield position. One single bolster trigger means she kills in three hits. This is old-school Elder Dragon levels of damage, like Nicol Bolas levels of awesome.

I settled on Dromoka, the Eternal. I goldfished a few hands with both Selvala and Dromoka as commander. Selvala just didn’t give enough boost to the deck. Dromoka assisted all the little critters and made the deck work well.

Sticking to Your Guns

When I told people my plans, they were always ready to tell my why Dromoka was the wrong choice, or how I should build the deck in a different way. 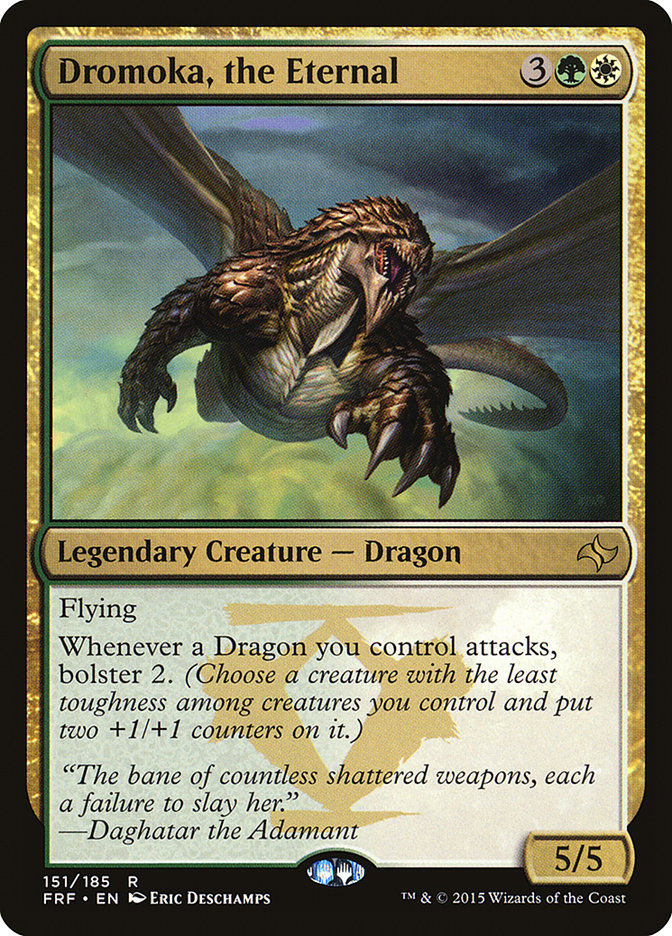 People are surprisingly quick to tell you that you are wrong. I assume that they mean to help, but immediately after they win a game is probably not the best time to tell someone that they should replace their commander! This happened quite a few times with Dromoka, the Eternal. Most pointed out a couple of other potential commanders like Karametra, God of Harvests or Tolsimir Wolfblood.

I continued to use Dromoka to command the deck. Karametra does excellent work in a deck with better payoff, but this list has few “payoff” cards for all the mana. I won’t Genesis Wave or Tooth and Nail or even cast Krosan Cloudscraper. Giant Warthog and its partner in crime Moss Kami are not exactly the big payoff cards for Karametra. Running the God of Harvests still leaves me in the situation of ramping so that I can cast a Wall of Blossoms and Stampeding Wildebeests. I’m still a little behind on innate creature power. 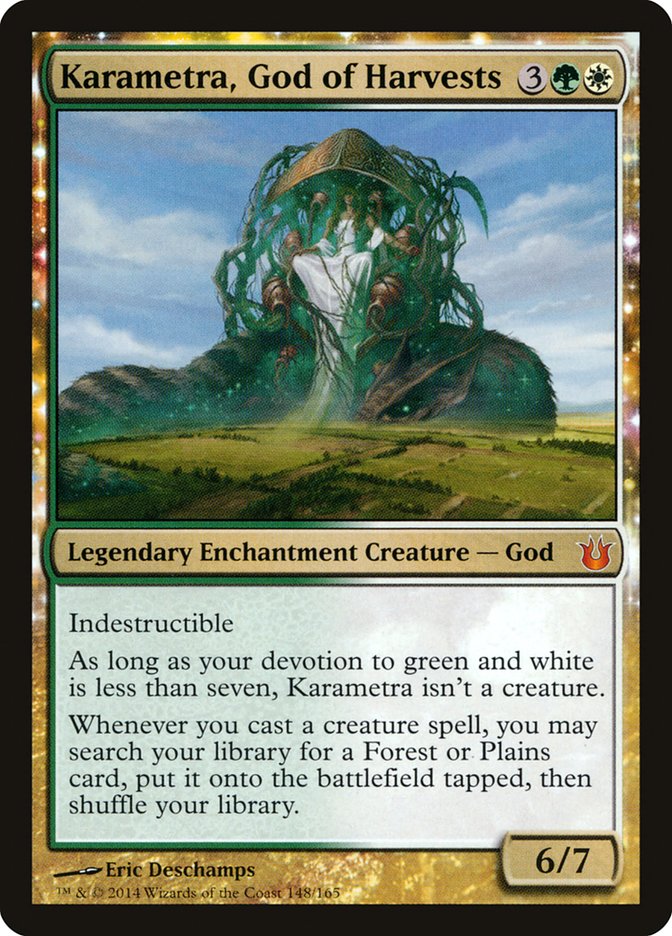 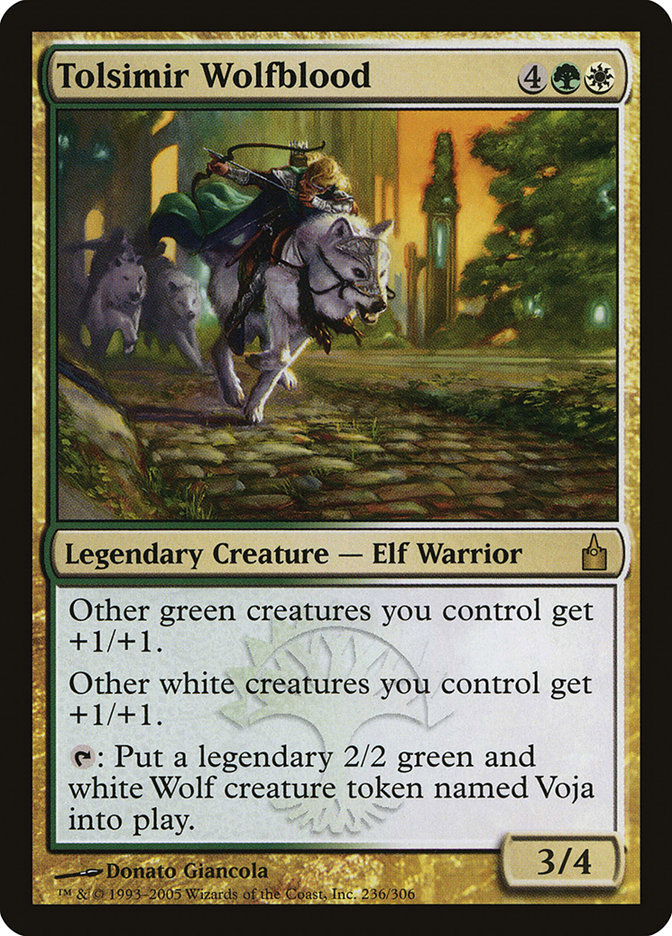 Tolsimir Wolfblood would work, and he brings Veja to add to the battlefield. However, he is six mana, and the difference between five mana and six is a lot larger than many believe. Kodama’s Reach, Cultivate, Fyndhorn Elder, or Greenweaver Druid with a three-land hand can guarantee five mana. Tolsimir Wolfblood would still be waiting in the command zone. Each subsequent recasting would make Tolsimir prohibitively expensive quickly. How much mana would you spend for a Glorious Anthem?

The comparison to Glorious Anthem or Gaea’s Anthem is another distinction between Dromoka and Tolsimir. Tolsimir can pump all of my creatures, but only by one. I have few white and green creatures to benefit from his separate abilities. Dromoka will pump fewer creatures, but the effect grows over multiple turns. Overall, Dromoka serves the deck better. The mana cost difference is the strongest point supporting her, but her evasion and ability to kill with commander damage gives her the nod for my build.

This is all well and good, but it isn’t exactly sticking to one’s guns. This example is more akin to being mildly stubborn. However, for the first three weeks of using Dromoka, the Eternal, I was told again and again about the other “better” commanders. A commander like Sigarda, Host of Herons is obviously more powerful and Trollhide does more work on the Angel. But Sigarda requires more than four cards to assist her.

Stick to your guns. You know your deck and your goal better than anyone in your playgroup. I am not saying to dismiss their input, but don’t let someone else build your deck.

If you stick to your guns, you can be rewarded. After a month, other players started talking about how the bolster effect messes with combat math or how Dromoka’s early-game pressures planeswalkers more than the regular metagame in our store. When you start seeing people discuss metagame shifts or using your commander in a different build, you know you are doing something right.

When have you stuck to your guns about your deck choices? Have you ever been told to scrap your deck or abandon a plan that you liked or one you wanted to make work?

Commander is about having fun slinging spells. If a deck with rhyming spells is what you need for fun, then go and build it. Don’t let someone else build your deck and don’t let anyone dictate your fun. Just make sure you talk to your table about the type of fun you want to have. With Dromoka, it is all about trying to get the pairs of cards on the table. Playing a late-game Elvish Mystic may not be efficient or useful, but Llanowar Elves needed a buddy.

We could all use more giggles in our games, especially during the stressful end of the year.