With the recent dramatic changes to the Pro Tour (PT) invitation system, I decided to examine how players perform at the PT based on how they were invited. I was able to perform the analysis for Paris, Nagoya, and Philadelphia; the data for previous PTs was not available (I did inquire to WotC about this, but if anyone knows of the existence of this data elsewhere, I’d love to expand to older Pro Tours). The problem with the older invitation lists was that the players who qualified based on Pro Player Club levels 4 and 5 were not listed, and without that information, a complete analysis could not be performed for those events.

For this analysis, each player could only be counted for one invitation category, which necessitated the creation of a hierarchy to deal with players who had earned multiple invitations to the event. The goal of my hierarchy was to count the primary way the player was invited and avoid counting invitations gained incidentally in obtaining that invite (for example, if a player Top 16ed a GP, they have a relatively high probability of also earning a ratings-based invite, but that ratings invite would be incidental with the GP performance invite. The hierarchy I ended up with (after consultation with a few other people was):

Legend to the Charts

Before the charts are presented, here is a legend for them:

#: Number of players who qualified (and showed up) from that invitation category.

%: The percentage of players in the Pro Tour who were invited from that invitation category.

#Day 2: Number of people who day 2ed from that invitation category.

%Day 2: Percentage of players in the invitation category who day 2ed.

#Cash: Number of people who cashed from that invitation category.

%Cash: Percentage of players in the invitation category who cashed.

#Top50: Number of people who Top 50ed from that invitation category.

%Top50: Percentage of players in the invitation category who top 50ed.

#T8: Number of people who Top 8ed from that invitation category.

Avg Constructed: Average number of Constructed points earned by players in that category.

Avg Limited: Average number of Limited points earned by players in that category.

Average Money: Â Average amount of money earned by players in that category.

% of Money Won: Â Percentage of the overall prize pool won by players in that category.

% Money Won/%Composition: This is % of Money Won divided by %.

Special Circumstances: Invite list for Paris was larger than the other Pro Tours due to Worlds and Amsterdam feeding into it. 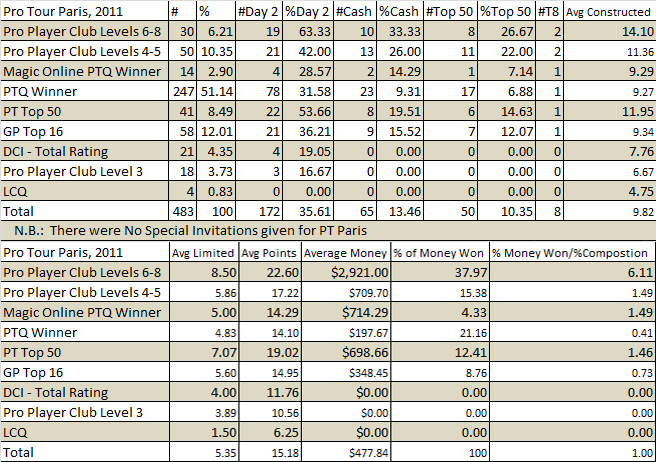 PT Paris featured the unveiling of Caw-Blade, a deck that was played almost exclusively by high level PPC members (most notably all of team ChannelFireball, with the unsurprising exception of Conley Woods), which goes a long way to explaining this group performing around a match win better, on average, than any other invitation category. Those who were invited from PT Top 50s and from level 4 PPC status fared around equally well in the Constructed portion by performing above average. Players who qualified from a PTQ win (irl and online winners performed remarkably close in both portions of the event), GP Top 16, rating invite, and LCQ performed below average in the Constructed portion (LCQ winners notably so, winning 1.5 matches on average). The results from Paris show a fairly large spread leading to essentially a three-tiered playing field where there seems to be very little mobility thanks to 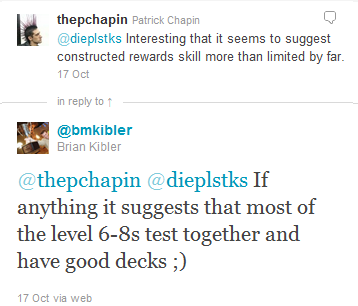 The money won by each category shows how the small edges (1-2 match wins) from above lead to a dominating performance when how much each category earned is examined. The level 6+ group took almost 40% of the total prize pool when they made up around just 6% of the player base.

PTQ Format: Extended (the one that no one played, 🙁 ) 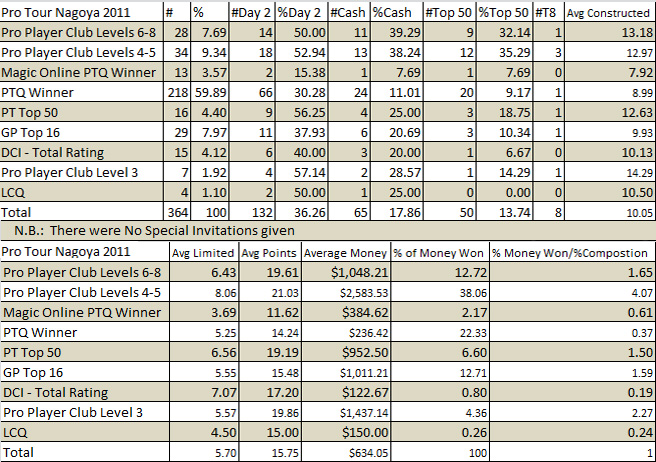 The Constructed format for Nagoya proved itself to be relatively unbreakable with no real breakout “tech” (with the possible exception of Puresteel Paladin), but looking at the results shows there was basically two tiers of players at the event. The first tier of players encompasses Pro Player Club levels 3-8 and those who top 50ed PT Paris while the second tier is made up of everyone else.

The Limited format, on the other hand, had almost all groups performing in the 4-7 point range. The exceptions were Level 4-5 PPC members who averaged over 8 points and MTGO PTQ winners who performed the worst in Limited (which is the most shocking result to me, as I would think the average winner of an Extended online PTQ would be an experienced drafter).

The money distribution shows that no group really had a huge edge in this event, which can be viewed as either a good thing (players form structured teams had no real advantage and everyone could do well) or a bad thing (both formats required relatively little skill).

PTQ Format: Standard (mostly before the banning of Jace, the Mind Sculptor and Stoneforge Mystic) 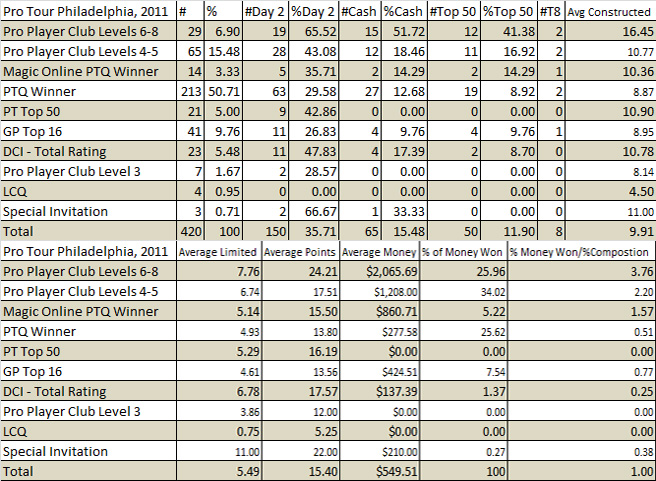 This was the Pro Tour of 2011 where those players who were level 6-8 in the PPC simply dominated Constructed (although they all played varying decks), earning an average of almost 6 match points more than any other invite category. All other invite categories scored about equally (if you discount LCQers, who did not have the benefit of any prep time for a brand new format), averaging between 8 and 11 match points.

The Limited format once again proves to not provide a significant edge for any one category (although the level 6-8s did manage to average at least a point higher than everyone else outside those with special invitations). Although the money numbers aren’t as dramatic as those from Paris, levels 4-8 in the PPC took home 60% of the overall prize pool even though they represented just 21% of the overall player base at the tournament.

“Now it’s time to look at what happens as a resultâ€”a smaller, weaker Pro Tour, bereft of many of the best players.”

The confirmed invite (there has yet to be news regarding what is happening to the PPC) categories lost in the PWP change are: PT Top 50, DCI — Total Rating, and GP Top 16. These three categories are, respectively, the 2nd (although the difference between them and level 4-5 on the PPC is very small), 4th, and 5th best performing categories on the PT. These three categories are replaced with a new group: Planeswalker Points: A group whose performance will be hard to predict, but my prediction would be that this group performs more similarly to PTQ winners than those who qualified off rating. Instead of rewarding players who have performed well at a small number of events, the system is now designed to incentivize those who perform mediocrely at a large number of events. For reference, at the time of writing this, I am ranked 80th worldwide with 1007 competitive points for the season (player of the year contenders LSV and Owen Turtenwald are ranked 76th and 75th respectively), and here are my finishes:

Based purely off (admittedly) terrible finishes (I haven’t even T8ed a PTQ), I am currently in contention to receive a plane ticket (#playmorenotbetter), whereas Richard Hoaen, who WON (#winningisok) GP Montreal is currently ranked 708 with 561 points and would not even come close to qualifying for the PT if there were no longer invites for T16 at a GP. The most important season in this PWP-based system is the one that is currently ongoing: it determines byes for all GPs next season as well as granting invites to the first PT of the season. With a PT and a guaranteed three byes at every GP next season, this creates a huge number of guaranteed points for each of the top 100 players (especially if they’re American) that it will require an astounding amount of work in order to displace any of them if they decide to grind the GP circuit to any extent.

It is not my goal to present possible fixes to the PWP system (the aforementioned open letter has better suggestions than I could muster). However, when we look at the results based on how people qualified, it is impossible to conclude anything except that the PWP invitation system, as currently implemented, will lead to a weaker Pro Tour. Yes, I believe Wizards will have to do something to tweak the system after PT Dark Ascension, but rolling out a flawed system when the first season is by far the most important is a relatively bad idea and will need some serious fixes to overcome the previously mentioned advantages that those grinding this season receive.

“I had Taylor Lautner above my computer. People thought I was gay. Those abs motivate a man to get to the gym though.”
-Aaron Rubinstein 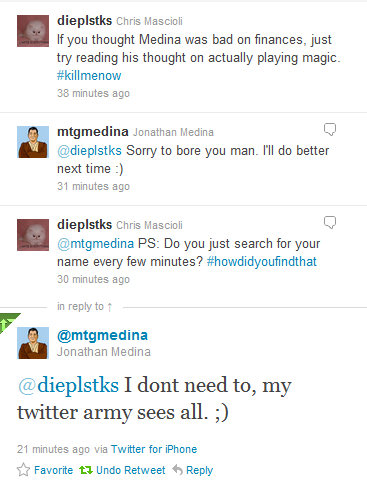 I also have a blog: http://dieplstks.tumblr.com/