A few years ago, Max McCall and I were both writing for this website and found ourselves engaged in a deadly game of cat and also-cat.

While I still believe I was right in 2010, if we were to have this debate again today I’d be firmly in the pro-Dredge, anti-Zoo camp. Forget whatever I may have said before about Dredge in this format; Dredge in Legacy is the real deal, thanks to one new printing that really brings the whole archetype together.

Before we go any further, this article presupposes that you have some awareness about Dredge in general and specifically how it functions in Legacy. While I’ll give you some background, those who are totally new to the concept of Dredge or have no background on the deck in Legacy should scroll to the bottom of this article for some reference links.

The Tortoise and the Hare

It used to be that when you wanted to play Legacy Dredge, you had to choose between two options:Â  slow and consistent or quick but easily disrupted; the tortoise and the hare, if you will.

The "tortoise" version, historically championed by folks like Richard Feldman and Max McCall, was built for consistency. Utilizing eight permanent discard outletsâ€”four Tireless Tribe and four Putrid Impâ€”this version sought to minimize mulligans and maximize consistency overall and was built for success when games were a grind. It had inevitability against most control decks but was still fast enough to out-muscle traditional creature decks. However, it came up short in matchups where it had to race, such as against Reanimator and Storm combo.

The "hare" version, with numerous advocates as well, packed a set of Lion’s Eye Diamond (LED) in place of Tireless Tribe. Supporting LED, this version had some copies of Deep Analysis; this allowed the deck to set off a chain of events, usually on turn 2 but possibly as quickly as turn 1, that let it rip through the deck and combo into the win. While fully capable of racing all of the fastest decks in the format, this version was considerably less consistent.

Unlike the "tortoise" build, which is quite resistant to counters and control strategies, hands with the "hare" build that crutched on LED could be blown out by Force of Will. While not necessarily a huge issue in control matchups, this was a problem against decks that had counters with pressure, like Merfolk. It also made the "DDD" (draw, discard, dredge) strategy more difficult, as each time you mulligan it takes an additional turn to get this strategy active.

I tried both builds in Legacy tournaments at various times, and I didn’t really enjoy either experience. Playing the former version, I found myself losing to Storm combo and vulnerable to Chalice of the Void and Trinisphere backed by pressure. Playing the latter, the deck was great when it worked and miserable when it took mulligans to oblivion, which at least for me seemed to occur with disturbing regularity (which I am more than willing to admit was over a small sample size).

I actually swore off Dredge in Legacy forever, and I felt pretty confident that the deck was miserable given a long run of atrocious match win percentage results in the SCG Legacy Open Series.

Nothing could change my mind about this; not solid results at a Legacy Grand Prix, not multiple incidences of success at SCG Legacy Opens: nothing.

Then this little gem came into existence: 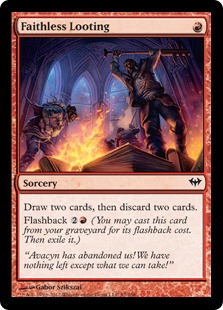 It was pretty obvious that Faithless Looting was going to be a boost for Legacy Dredge, and sure enough, Adam Prosak version caught my eye; in fact, this was a rare occurrence of a deck featured in an early deck tech winning an SCG Legacy Open. Adam wrote about his experience after the tournament here.

Since Adam’s win, Dredge has made the finals of another SCG Legacy Open and the Top 8 of a Legacy Grand Prix. As it turns out, the deck is pretty spectacular, especially as long as people don’t play Dredge hate in Legacy.

You no longer have to choose between the tortoise and the hare. Take that, childhood morals!

Like the Tireless Tribe build, this version is consistent; packing thirteen or fourteen lands, it generates a high percentage of keepable seven- and six-card hands. And, like the old LED versions, you get the speed and power of Lion’s Eye Diamond, which enables you to win as quickly as turn 1.

"We have nothing left except what we can take!"

Let’s get down to specifics.

Foundationally, the maindeck of this version of Dredge takes this set of 68 cards and shaves it down to a workable 60 cards:

As you work this down to 60 cards, there are a number of tensions to consider.

You could end this sequence having gone through half your deck on your first turn, although you’d be in slow-dredge mode going forward. That said, this can be a very effective tactic when you absolutely have to race or interact on the first turn of the game, such as against Storm combo or Reanimator, and most "fair" decks are going to fold to being Mind Twisted and facing an undead army as quickly as turn 1.

Compared to Looting and Study, Breakthrough is more of a combo-enabler. It’s far more of an all-in card and is typically played after a prior set up spell on turn 1, although it can also enable you to do broken things immediately; consider the hand above, but replace the initial Faithless Looting with a Breakthrough. Assuming that the Breakthrough resolves, and you are able to dredge on all four draws from Breakthrough plus the two draws from the Faithless Looting (should you dredge into one). It’s likely that you’ll win the game on your first turn.

Cabal Therapy is critically important against combo and Reanimator and is also an important tool against control decks, so if you expect a field comprised mostly of those types of opponents you may want to play four in your 60. Regardless, if you do shave one off, move it to your sideboard for those matchups.

The quantity of dredgers to include is a matter of personal preference; one of the most frustrating ways to lose with Dredge is to keep a hand with a Faithless Looting and Careful Study but no dredgers and hope to draw into one…but fail to do so. I generally recommend at least eleven dredgers, with ten being the drop-dead minimum and twelve being a good number for consistency.

Some people have advocated taking the entire Dread Return package out of the deck; this is an easy way to bump up cards like Golgari Thug, Ichorid, Cabal Therapy, and Breakthrough to maximize consistency. The argument is that usually you don’t need Dread Return to win games. Dismantling an opponent’s hand with Cabal Therapy is usually enough, combined with the resulting Zombie tokens and Ichorids, to win the game.

Other folks go the opposite route and play additional copies of Dread Return and more than one target; for those looking to add a "combo" target, creatures like Sphinx of Lost Truth, Sun Titan, Eternal Witness, and River Kelpie are among the best. For permanent removal, Angel of Despair is the most popular, but Woodfall Primus and Terastodon also have seen play. Those looking to disrupt opposing strategies might look to Iona, Shield of Emeria, Sadistic Hypnotist, or Realm Razor.

In terms of a combo kill, most people choose one of two options: Flame-Kin Zealot or Flayer of the Hatebound. Flame-Kin Zealot is the traditional option and can be used with as few as one Dread Return, though most people choose to play at least two. Flayer of the Hatebound generally requires two Dread Returns to be lethal, so when choosing that option it makes sense to play three Dread Returns with a secondary target from the disruption, permanent removal, or combo groupings.

I’m not going to claim that I’m knowledgeable enough to suggest an ideal or optimized list, but this is probably what I would play if I had a tournament today:

There are a couple things that I’m still working out with this list.

The first issue is that I really want to play four Careful Study; typically, I’m moving the third Ichorid to the sideboard to make room for it. The extra Careful Study helps make sure you’re able to get your dredge on and adds some consistency, but I feel like making sure you’re hitting an Ichorid in the games that can drag a bit also bumps your win percentage in game 1.

The second issue is the sideboard. I’m reasonably confident that you should be playing four Firestorm; it’s the perfect anti-hate card in that it fits your strategy while removing the most commonly played hate card in Legacy: Scavenging Ooze. It seems to me that the second most played hate card is Surgical Extraction, which is why I’m playing a couple Bloodghast. Extraction is an annoying card, but simply adding a few Bloodghast and another Dread Return target gives you so many strategic options that it probably takes three resolved Extractions to beat you.

I also hate the idea of having nothing should I run into someone playing Leyline of the Void or Grafdigger’s Cage, but there’s a few problems there. First, hardly anyone is actually playing those cards. Second, if people do start playing those hate cards, you would need probably between six and eight anti-hate cards; playing three or four is basically just wasting sideboard space. Third, if folks are playing those cards in numbers, you may just want to play a different deck entirely, presumably one that they no longer have answers for (since they’re playing a bunch of Leylines and Cages).

That being said, where I have four copies of Leyline of the Void I think it isn’t the worst idea in the world to play a mix of Nature’s Claim and Ancient Grudge. Grudge, in particular, is a useful one-of as you can dredge into it to beat cards like Ensnaring Bridge that actually see play.

In any case, this deck’s strength is going to ebb and flow, not so much with the metagame around it but with the amount and type of hate being played at any given time.

Right here, right now… This is the best combo deck in Legacy.

For the curious, here’s second best:

This is the runner-up from a large Legacy event earlier this month, and I love the use of Burning Wish from TES combined with the Gitaxian Probe / Cabal Therapy interaction that Carsten Kotter wrote about recently.

The winner of that event? Dredge, obviously.

Voltron00x on Twitter, The Mana Drain, and The Source

Ando Ferguson, "Dawn of the Deaf"