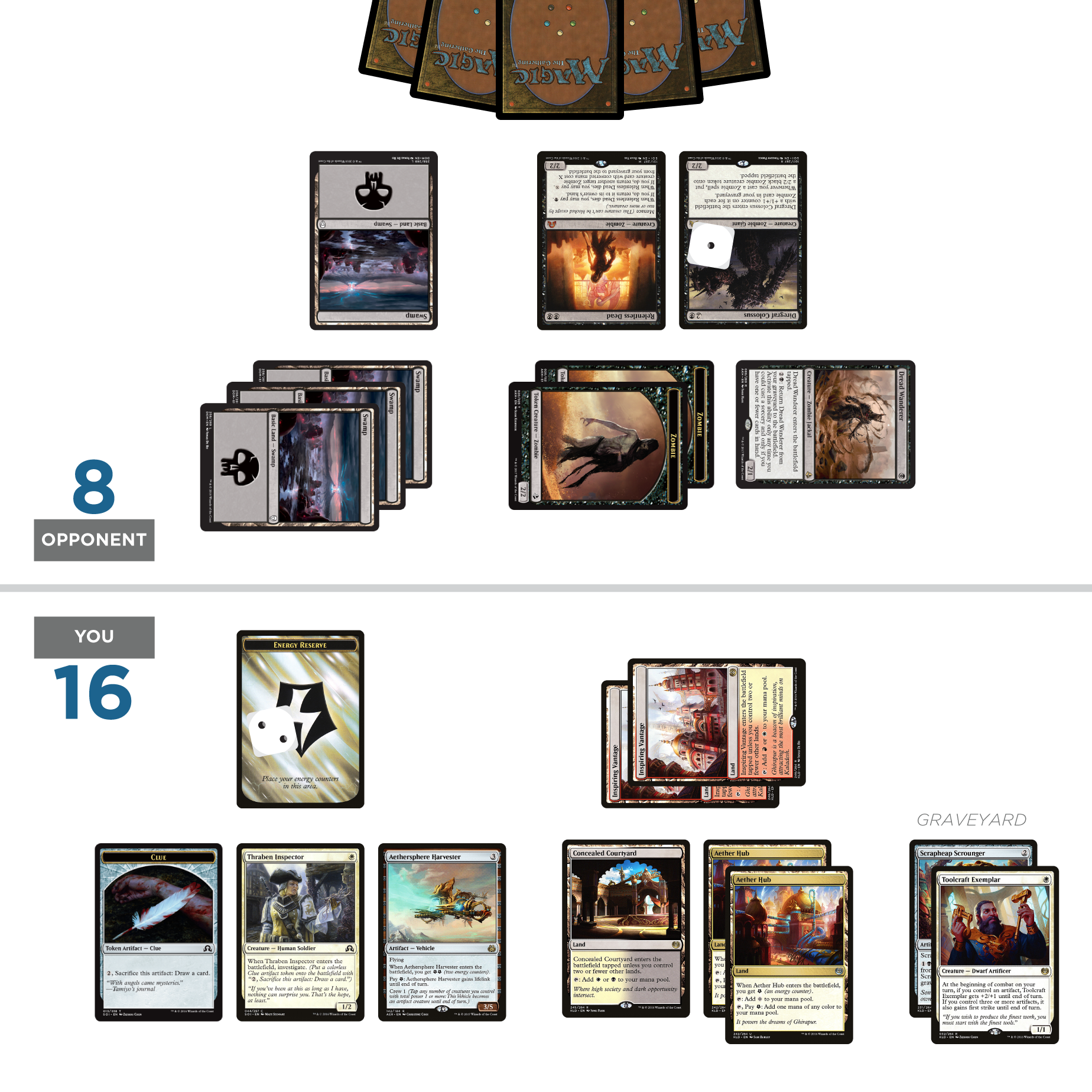 Your opponent did not play a land last turn. While you cannot be 100% sure,
you strongly suspect that they have at least one copy of Liliana’s Mastery
in their hand.

You basically have two options:

A large percentage of the time, attacking with the Harvester leaves you
dead in two turns. You’ll gain three life, but they’ll get to counterattack
you for at least eleven so you’ll probably have to leave it back on the
next turn. Your opponent didn’t play a land last turn, so you’re fairly
certain they have five spells in hand. Even if they don’t cast Liliana’s
Mastery on their next turn, you’re still likely to be facing an even larger
horde of Zombies. If you choose this line, you’ll need to draw one of the
following to win:

Unlicensed Disintegration and Walking Ballista both win the game
immediately assuming your opponent doesn’t draw an answer to Harvester,
which they haven’t had all game. Archangel Avacyn doesn’t win the game on
the spot, but she should make you a favorite to win if your opponent’s hand
is all threats and no removal. Pia is also an out most of the time.
Assuming your opponent attacks you with everything next turn and plays two
more threats, you can bring back Scrapheap Scrounger at the end of their
turn, you can use Pia’s ability to sacrifice the Clue token and her Thopter
token to clear the blockers and attack with Scrapheap and Harvester. Nine
total hits out of about 45 means that your odds of winning are a bit less
than 20%, since Pia and Avacyn don’t win a full 100% of the time you draw
them.

That might not seem like much, but compare that to the scenario where you
leave the Harvester back. A few years ago, I might have chosen this line
since it would give me the highest number of draws. The problem is that
Zombies is an extremely flavorful deck, insofar as Zombies just keep
coming. In this matchup, trying to keep our opponent’s battlefield clear is
nearly impossible. Your opponent almost assuredly has a ton of gas left and
can probably generate at least two additional threats each turn. There are
only two cards that you can draw that make you a favorite to win: two
copies of Archangel Avacyn. Barring that, you’re hoping for an unbroken
string of great spells to keep you in the game.

Sometimes your “out” is your opponent not having a key spell. This comes up
often against combo decks or other decks that generally have explosive
turns. Suppose that you are playing R/B Aggro against U/W God-Pharaoh’s
Gift: 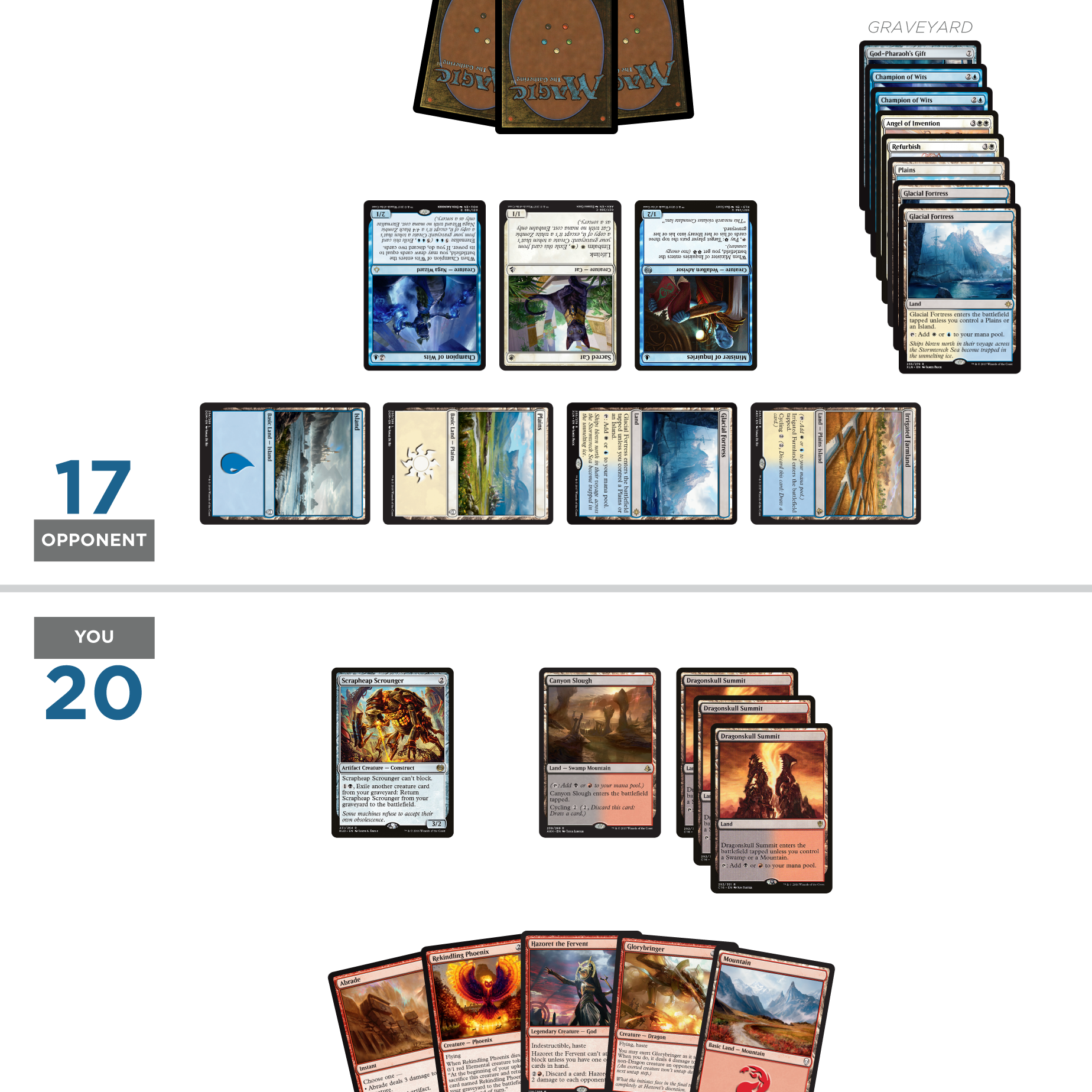 Your opponent has a solid start while yours has been fairly anemic. Your
opponent just cast Champion of Wits discarding God-Pharaoh’s Gift. If one
of their two remaining cards in hand is Refurbish, you’re probably not
winning. Do you pass without playing anything so that you can Abrade a
potential God-Pharaoh’s Gift? Or do you cast Rekindling Phoenix and get
some pressure on the battlefield?


The problem with passing the turn in this spot is that you aren’t really
accomplishing anything. Your opponent is under no obligation to cast
God-Pharaoh’s Gift into your open mana. Since you’re not pressuring them,
they can just pass the turn back as they slowly develop their battlefield.
This is to say nothing of the fact that they might not even have a
Refurbish. In that scenario, passing the turn without doing anything just
gives them more time to find what they need.

The best thing to do here is cast Rekindling Phoenix and cross your
fingers. Sure, sometimes they’ll Refurbish a God-Pharaoh’s Gift onto the
battlefield and you’ll die horribly. For the times that they don’t have it,
you’ll be giving yourself a chance to win a game that would have otherwise
spiraled out of control.

Here’s another example from a game between R/B Aggro and a nearly
Mono-Green Ghalta, Primal Hunger deck: 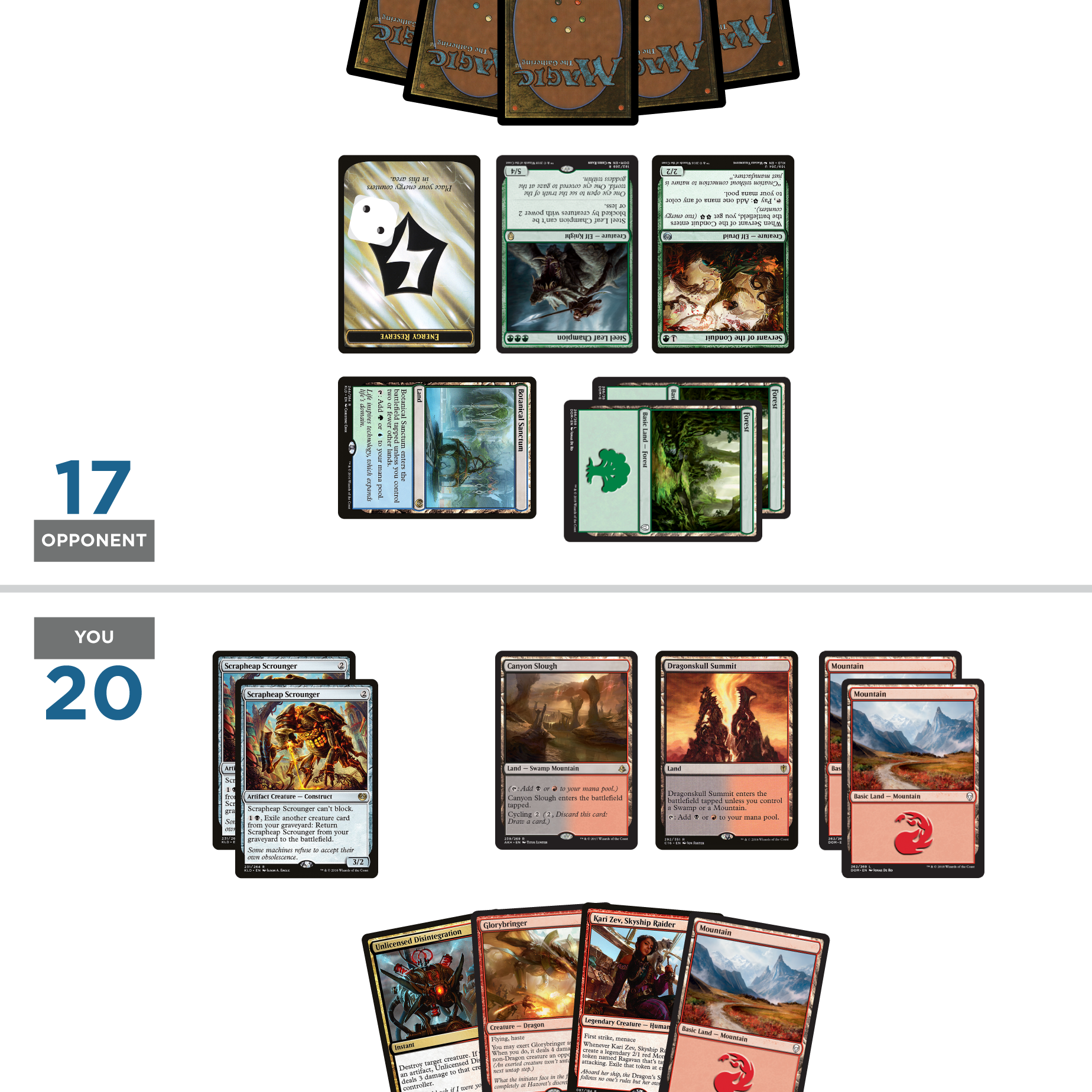 You’ve already played a land, so your decision is between casting Kari Zev
or Unlicensed Disintegration. You suspect that your opponent might have
Blossoming Defense in their hand, since they didn’t attack with Servant of
the Conduit. However, they could be leaving it back to block a Scrapheap
Scrounger, which could also make sense if they didn’t have the Defense.

If you cast Unlicensed Disintegration on the Steel Leaf Champion and they
don’t have Blossoming Defense, you’ll be a huge favorite to win. Your
opponent will be at fourteen and you’ll get to attack with two Scrapheap
Scroungers, likely forcing them to block with their Servant. Your
opponent’s deck needs a critical mass of creatures on the battlefield to
cast Ghalta, Primal Hunger and overwhelm you with huge threats. If you
clear their battlefield this turn, it’s likely that your Glorybringer will
be able to handle their next threat and you’ll sail to victory.

If you cast Unlicensed Disintegration and your opponent does have
Blossoming Defense, things look horrible for you. You’ll trade your entire
turn and one of your best spells in the matchup for just a single mana
worth of effect. Your opponent will still be at seventeen, and your attack
looks much worse. They’ll probably be able to cast Ghalta next turn. You
won’t be able race, and you’ll have to draw another copy of Unlicensed
Disintegration immediately or you’ll die.

However, the alternative is just as bad. If you just cast Kari Zev, you
still won’t be able to profitably attack this turn. You’ll have to pass the
turn without doing much, and your opponent can just keep open a spare green
mana at very little cost to their battlefield development. You’ll be faced
with a similar decision next turn, and probably every turn for the rest of
the game.

The takeaway here is simple, though it took me years to fully internalize:
Don’t play around something you can’t beat anyway. Sometimes your
Unlicensed Disintegration will run right into their Blossoming Defense and
you’ll feel like an idiot, but sometimes it won’t, and you aren’t gaining
much by playing it safe.

This concept is related to the idea of playing to your outs. In both cases,
the main principle is that sometimes in order to win, you need to be
willing to lose. 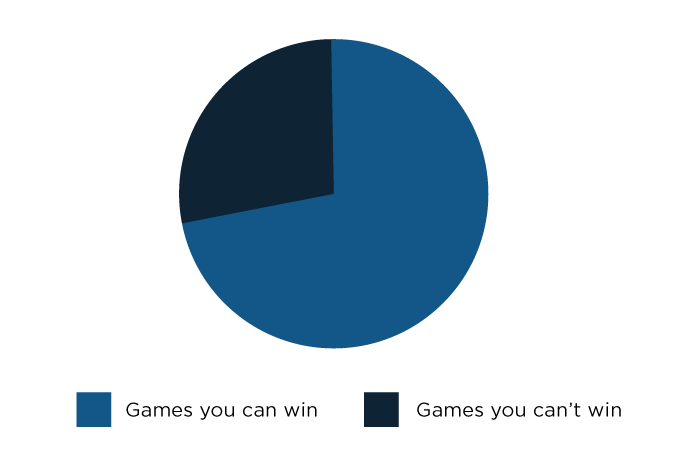 The first step is realizing that there’s a portion of this chart for which
you don’t have any equity. Don’t make sacrifices in the remaining portion
to chase after something that you can’t get. Instead, focus on winning the
games you can win.

An important thing to stress is that you still don’t want to take these
concepts too far. They only apply to a small subset of games you’ll play.
I’m not advising that you never play around anything; you should always be
cognizant of what your opponent might have.

The trick is figuring out how big each portion of the cart is. What I mean
by this is that in order to commit yourself to a risky line, you want to be
reasonably sure that you can’t actually win the games that you don’t think
you can win. Often, the only way to get to that level of certainty is to
practice. In the Zombies example earlier in this article, I know from
playing the Mardu side that it’s extremely unlikely that you’ll be able to
control the battlefield over the course of several turns. I only know this
because I had played that matchup countless times over the course of about
five months. In the game against Mono-Green, I know from playing the
matchup that the green decks rely on building a strong battlefield as early
as possible.

The ability to recognize spots like this has noticeably improved my game.
There’s still a fine line between taking calculated risks and just playing
recklessly, and I’m sure that there are times where I get a little too
aggressive. Still, just looking for those spots is a good exercise. It
takes experience to get a point where you’re confident in your assessment,
but once you get there it can be an extremely valuable still.