So another Sealed Deck qualifier season is almost upon us. While I love the way the Extended season finally matured, I wish I could have discovered it earlier. I want to talk a little bit about Extended before I get into Sealed Deck, just because insights I have gotten in the last few weeks are so useful and the results of recent tournaments show it. There is one more weekend of Extended qualifiers (though not many) plus there are a series of qualifiers leading up to the PT itself before the LCQ. 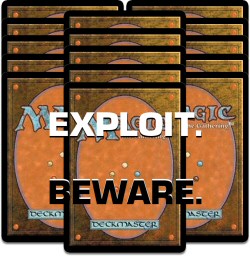 At Pro Tour: Atlanta (17th after grinding in at the LCQ by the way, miiiiiiiiiiiiise), Ben Stark shared a theory of his with me about Extended. He said that your best resource in Extended is your sideboard. There are so many sideboard cards that just decimate certain decks. He said that all the Wish-based decks floating around were robbing themselves of their most powerful resource. So he thought for a PTQ the best deck would be R/b Goblins. It is an aggressive deck that can have an incredible sideboard. Ben forgot one thing.

The converse to his theory is that with such powerful sideboard options, playing a deck that is so susceptible to them is problematic. As much as you’d like to live in your fantasy world that you can beat an Engineered Plague, that card is a complete nightmare for Goblins. While one copy is not instantly game over, you are at a huge disadvantage. Two copies is game over. You can have Goblin King, or Dralnu’s Crusade, but then you are using 2-3 sideboard slots to combat one card rather than a deck or multiple decks. While Chill is often not a problem because of Aether Vial, if they kill Vial, or you don’t draw Vial is a big problem.

So what does all this mean? It means there are three decks I would consider playing in a PTQ at this juncture: Psychatog, Macey Rock, and Temporary Solution. These decks are the decks that best exploit both Ben’s theory and the converse. They have great sideboards and aren’t very susceptible to opposing sideboards. If you have more PTQs to play in, then I highly recommend playing one of these three decks.

Anyway, the vast majority of you are gearing up for Sealed Deck, so I am going to talk to you about Sealed Deck. 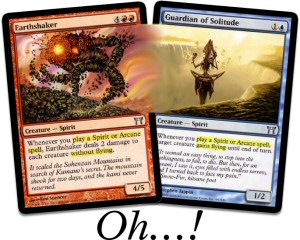 I love this Limited format. Frankly, I love this Block Constructed format too – I have only begun testing Block, but it is extremely exciting. Great Job Wizards! [Minus that whole Jitte thing anyway. – Knut, who would have greater reservations if there weren’t an infinite fog deck running around] Anywho, this Limited format is so incredible because there are so many interesting interactions in the format. There are interactions you can easily see (Tallowisp plus Cage of Hands) and ones that you need to see in the game to really grasp (Earthshaker plus Guardian of Solitude). These types of synergies are what the format is all about.

I don’t want to discount bombs. There are plenty of bombs that will win you games, particularly in Sealed where the players don’t get to select answers. There are a number of bombs that should force you into colors. I know this sound strange coming from me, but there are two factors that make bombs so much better I this format, even if the cards by themselves aren’t as powerful.

First of all there are plenty of bombs that fit in very well with the synergies of this block. Many of the bomb rare creatures are Spirits, and some utilize the playing of Spirits and Arcane spells (Spiritcraft) themselves, such as Kodama of the South Tree. When you have extremely powerful individual cards that also fit into synergies or mana curves the power of the card grows. This is the factor that is most important when considering the bombs for your deck.

The second reason bombs shine brighter in this block is that the overall power level of the cards is down. The commons and uncommons just aren’t as impressive as in sets past, so bombs will more often impact games.

So when I am building a sealed deck, what card am I most looking to open? The answer may surprise you. Umezawa’s Jitte. Okay, just kidding, that isn’t very surprising and wasn’t what I was getting at. Clearly this is one of the best Limited cards ever printed and everyone should want to open it. It’s also an Artifact so you know you can play it.

The other card I was referring to was Earthshaker. My love for this card has grown over time. It keeps growing every time I cast it. If you aren’t playing against Black and you untap with Earthshaker in play, you are probably going to win the game.

I normally drone on and on about theory in my articles, but this time I thought I’d add some practicality to my article. I joined a league on Magic: Online so I could work with a real live digital sealed pool. Here is what I opened:

Yomiji, Who Bars the Way

Kaijin of the Vanishing Touch

In the Web of War

Order of the Sacred Bell


Black was an easy omission. I don’t like playing three colors and Black was extremely shallow in this pack. The cards it did have weren’t overly impressive. Green was the next to go. With Green you either want aggressive cards or big hulking men. The Green in this bunch didn’t really supply either, with only Reach and Petalmane for acceleration, and not much to accelerate you to. White is a color that wants a lot of creatures. I didn’t get many in this card pool, so White can’t really be played effectively.

That means I get to play with Big Shakes. All the tools are there for a good Red Blue Spiritcraft deck, they are my two deepest colors. This wasn’t a tricky build in my mind, but if you aren’t looking for those synergies it could be. I don’t expect much debate on my color choice, but I do expect to hear some flack about my specific card choices.

Here is what I decided to game with:

Kaijin of the Vanishing Touch

My mana was already a little shaky and I had the Kami of Twisted Reflection in there. I think this card is definitely better than the Kami, but I wanted to power my Baku and my Earthshaker. Kami not only triggers Earthshaker alone, he can also bounce a Spirit that is in play so you get another activation out of him.

There are too many five+ drops in this deck. The Baku got the nod over this guy, not only for mana issues, but also because he is more synergistic with the deck.

I got some Spiritcraft, but not nearly as much as I would have liked. I am still confident that this build is correct though. The first match I played everything went according to plan. He was Green/White with a hint of Black, but the games were me controlling the board until I got to Earthshaker. The second match I played against the Foil Earthshaker mirror match. He was Red/Black so he had a significant advantage with Horobi’s Whisper.

If you think this deck is too reliant on Earthshaker, that’s not the case. It has early ground stall, fliers and removal. The Shaker is just icing on the cake, and as with all cakes, the icing is delicious!

Spiritcraft isn’t the only synergy this deck has to offer. We have Kiki-Jiki with Kami of Twisted Reflection to act as the good half of Crystal Shard. We also have Moonring Mirror with Reach Through Mists and Soratami Cloudskater. We have Lava Spike and Reach Through Mists as cheap Arcane spells to splice costly Torrent of Stone and Consuming Vortex onto. We have Phantom Wings to go with Mistblade Shinobi and Earthshaker. Phantom Wings not only protects normally ground creatures from Earthshaker, it is a bounce spell that can return a Spirit to recast it without killing it off the trigger.

I feel this approach to sealed deck building is by far the best. I intend to play many more matches with this deck and report back to you on the results.

I hope these insights into Extended and Sealed deck will help you in upcoming PTQs. These two formats are very similar believe it or not. They both require some creative deck construction to say ahead of the curve. There is more to a format than knowing decks and cards. It is critical that you keep yourself informed of the interactions the cards in the format have. Theory is great, but practice will show you much more. Just remember you want a healthy balance of both. Theory without practice will leave you unprepared. Practice without theory will leave you unfocused.