So, organized play changes, how about those then? Well, I know a lot has been said on them already, so I’m hoping this won’t come as one article too many on the subject. But, a number of you on Twitter did express an interest in hearing my own, non-US, non-pro perspective. Hopefully having read everything else on the matter, I can give such a view without too much repetition.

For a start, I won’t bore you with the details and quote the various announcements that have been made. This is not an introductory, 101 class. You readers know a lot already. I’ll assume you realize the Planeswalker Points system has a heavy bias against non-US players when it comes to qualifying for the Pro Tour. Now, to explain how the latest swath of changes on top of this are the “straw that broke the camel’s back,” which render Magic close to pointless for many players I know, and possibly even myself. Gulp.

Consider my (perhaps somewhat dubious) analogy of a ladder. What is it for? Why, to get to some highly elevated prize, of course! A ladder is propped up against a high wall with a sweet reward (perhaps a delicious, freshly baked pie full to bursting with your favorite filling) on top of it This ladder has a purpose; each rung we ascend gives access to the next, to bring us closer and eventually deliver us to this tasty reward. Now take away the pie, and what do you have? A piece of wood that doesn’t do anything, except satisfy some bizarre need to not be standing directly on the ground. That second ladder is Magic organized play as of the November 2nd OP changes announcement; the rungs are various levels of tournaments that used to mean something. But Magic is just another game now.

Economists often say, “People respond to incentives”—and we Magic players have done so, for a great many years. As one example, the chance of being honored to play for our country has made Nationals one of, if not the, most important tournaments in a Magic player’s calendar. It has necessitated trips to grey and dreary cities we’d never have otherwise chosen to visit. It has caused weeks of tension, agony, and ecstasy, as we’ve played in the Qualifiers that feed into the main event itself, battling just for the right to play in this tournament, which could maybe lead to that ultimate prize. A chance at a chance.

But there is no team competition at Worlds anymore. There isn’t even a Worlds (as we have known it) for the top 4 finishers to compete in.

So what’s the point of playing in Nationals then?

What are we even going to be competing for come summer 2012?

Nationals isn’t really important anymore now is it? In fact, without just the chance of playing at Worlds, it seems pretty irrelevant.

Which means we won’t be travelling to NQs every weekend for two months anymore I guess.

Which means we don’t need to test Standard decks every Friday at FNM now I suppose.

Which means we don’t even need a Standard deck to play with. (Remember, we Euros don’t have a wonderful and richly rewarding Open Series, and many FNMs, including my own, are run exclusively as draft.)

So why am I buying or trading for these cards again, if I’m only playing for fun with my friends, and we can totally just use proxies sneakily printed out on the color printer at work in our lunch hour, instead of shelling out for double-digit rares and mythics?

So uhh… how is Wizards of the Coast (even if by proxy) getting all that money of mine now?

Oh, I guess they’re not.

Similarly, what about GPs? The UK tends to get one every other year or so, and the others within reach are a trip of a few hundred quid (including flights, hotel, food, and drink) away to Europe. Without the chance of a top 16 PT invite, for all but the wealthiest of us, these seem like a once-yearly excuse for a trip with friends, at best. Let’s face it; you’re not playing GPs for the cash prizes now, are you.

And so the GPTs awarding three byes, a considerable leg up to that necessary top 16, are suddenly a lot less appealing. Even with a guaranteed flawless 3-0 start, what exactly are you playing for, when as a Brit 20-something on a Brit 20-something’s wage (or worse yet, student loan), you can afford maybe three such trips maximum per year? It’s not like those are likely to earn you enough Planeswalker Points  to lock up some all-important PT invites and flights now, is it?

Moving back to the Nationals we no longer are hugely invested in, our lack of wanting, no, needing, to top 4 that tournament means we are no longer interested in the “summer of core set”—save perhaps a head in the door at the Prerelease and a sealed PTQ, if there’s one nearby. Listen up, Wizards: We recognize it is a necessary yearly product for new players (for whom it is ideal), and to keep certain cards in Standard rotation, but a lot of us more competitive and/or deeply enfranchised players don’t really like playing core set Limited. It’s been getting better each time, sure, but M1X draft is never going to be triple-Innistrad, Ravnica full block, or [insert your favorite draft format here]. And it never can be because the relative simplicity of mechanics and familiarity of flavor required for a core set to be a core set mean it just isn’t quite as good, for some of us, as a “proper” expansion—and that’s even before we even consider the lower percentage of exciting brand new cards such a set will contain.

As such, you have to make the Nationals Limited format (much to our despair)  two triple-M1X drafts in order to get players like us to play it at all outside of the Prerelease/PTQs. As discussed before, we no longer need buy card singles, as we’re not keeping up with Standard, and now we’re not in the slightest bit fussed about Nats, that means we needn’t play core set Limited at all.

Meaning we can happily take a break from Magic for a quarter of every year when this is the focus of organized play.

So now WotC is only getting three-quarters of the already severely diminished amount of money we were spending on their game before.

Okay, so I guess I should try and bring this angry, furiously keyboard-bashing, somewhat all-over-the-shop rant to a conclusion: If you take away the top-level incentive which is supported by every level below it, there is a cascading effect all the way down to the FNM level of play for a certain percentage of Magic’s most devoted players. Without the chance of something bigger to give each event meaning, why bother? Sure, Magic is still a very good game that is a great deal of fun to play, but why do we need to enjoy it within the restrictions of (often costly, and out of the way) organized play rather than on our own terms, with proxies where necessary and away from the expensive secondary market? When it is so resigned to being just another one of many games, it has a lot more competition and looks to have a lot less value for money. I mean, after the initial setup cost, when did we ever have to pay an entry fee for a game of Ascension or Agricola? And World of Warcraft on an £8.99 subscription is less than a draft for a whole month of unlimited enjoyment!

Magic used to be an all-encompassing obsession for myself and the majority of my friends. Now? It’s beginning to seem a lot more like “just another game” we can take or leave, dip in and out of as we please when the occasion fancies us. Something we do when we have time, rather than make time for. Many of my friends have found this the perfect point at which to drop out of the game entirely, in fact: 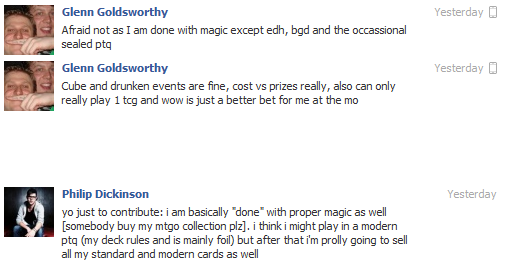 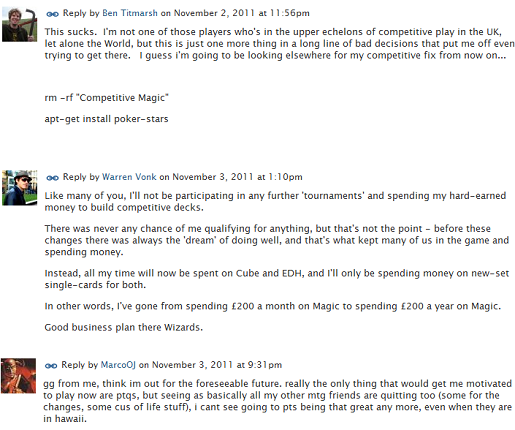 I feel a lot of my friends may be overdoing it with their cold-turkey quits of Magic, but by this point you must be able to see why they are having such a reaction. Particularly over here in Europe, where the events don’t exist to “grind” our way up the Planeswalker Points leaderboard to high-level event qualifications, the game has lost a huge amount of the appeal it has had to us with these new changes to organized play. It may well still work just fine for someone completely fresh to Magic, dipping their toes into its waters for the first time now, but for people who are used to a certain range of incentives to play, taking these—and thus the meaning and importance this game has had—away renders it a shell of what it once was.

“The winners from that tournament [Worlds 2010] all play in Beijing. I have gone to FNM in three different locations in the city, and two of them had framed pictures of them celebrating with the check” – Pete Dun (dv8r)

Wizards of the Coast, my friends and I want to give you our hard-earned money and invest our time into your game as well. Really, we do. But we need a reason to choose you over myriad other fun and intellectual pursuits. We used to have that. But not anymore. If we matter at all to your bottom line and goals as a company, please think of us. If not, then you may see many of us waving you farewell, or at very least see a reduction in how seriously we take, and how much we play, and thus spend on, your game.

Note: This is not intended to be a farewell, “I quit” article from me. If and when I go out, it will be with a bang and not a whimper!

However, I was asked recently: “What would have to happen for you to quit Magic?” To this I answered that there are lots of games I enjoy playing in my spare time with friends, and that right now Magic was king among these. I will never not be a gamer of some type, but if Magic becomes less important among my friends, then accordingly it will with me too. We won’t stop being friends if Magic dies; we’re far too closely bound outside of it for that to happen now—we’ll just move onto something else, another game.

As such, while I am unlikely to ever quit Magic entirely, you can expect to hear from me a little less often as time goes on and as Magic grows less important among my peers. I’ll try to make the next one a little less of a downer.