Step inside, warm yourself by the fire… and let us talk once more of Dominaria…

Limited
Bomb: The only way to react to opening this card in Limited is by a comically exaggerated rubbing of the eyes, e.g. Richard Hoaen.
Good: A reasonable first-pick, e.g. Gab Tsang.
Solid: Your classic good man, e.g. Elijah Pollock.
Playable: Some of the time you’ll run it, some of the time you won’t, e.g. Paul “the muscle” Russel.
N/A: Even a perfunctory knowledge of the game prohibits the inclusion of this card, e.g. Alex Sibzthorpe. 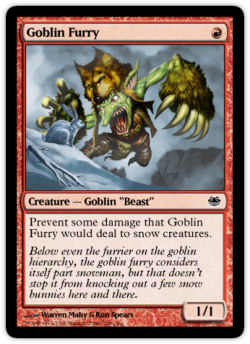 Constructed: N/A. The days of the Ironclaw Orc are dead.
Limited: Playable. (Note: only Red 2-drop.)

Constructed: N/A. The days of the Grey Ogre are really dead.
Limited: Solid. Prevents the situation, which does come up, of having your entire army held off by a 2/4.

Constructed: Fringe. With double-lands still in the format for a while, this is sure to see at least some play. Recover is definitely relevant here; I’m just not sure how relevant yet.
Limited: N/A.

Constructed: Maybe. Fairly difficult to block, but would even a 1/1 R Unblockable creature be worth playing over some of the other options?
Limited: Playable.

Constructed: Maybe. Seems potentially reasonable in the sideboard of that all-burn deck, or even in a Zoo sideboard versus WW/Boros. Probably not.
Limited: Solid. Like Soulscour, the design of this card does add up; you want to slow-roll your ground guys to avoid the Earthquake, and so you’ll have them in hand anyway. Otherwise, you can just run it out and hope for a good opportunity, or that they’ll make a mistake on the number of Red cards you have in hand. That’s pretty respectable for a one-drop.

This card’s very existence is going to affect a ton of Limited games, as players strive to play around it.

Constructed: N/A
Limited: Good. Can probably do the last four or five points if need be, and makes combat easier.

Constructed: Fringe. The only question is how bad you want that turn 2 Rumbling Slum…

This type of card has pretty versatile application – the right combo deck, or the right beatdown deck – and I expect it to see play in at least Standard at some point.

Constructed: Maybe. If you play all Snow-Covered lands, this will eventually kill just about anything for only one mana, which seems passable.
Limited: Good. The price is right, even if you have to roll it until turn 5, and it’s removal with the potential to kill a big creature.

Constructed: Maybe. I can’t imagine playing this over Volcanic Hammer, but this seems like it would suit some sort of all-burn deck.
Limited: Good.

Constructed: N/A. I know it’s a slug made out of fire… that’s pretty rad, but I just don’t see it happening. Sac’ing all your guys up for big Demonfires is something that might pass in Block, but not anywhere else.
Limited: Solid.

Constructed: N/A.
Limited: Playable. I think it’s rare that it’ll do that much, but it still cycles.

Constructed: N/A
Limited: Solid. The ability doesn’t seem game-breaking, and a 3/2 on its own is nothing special. I’m possibly underrating.

Constructed: Good. This will see play in sideboards, probably in Extended too. Three-mana land destruction is obviously nothing to write home about (especially when it can’t kill a double land), but the decks that used to sideboard Stone Rain for control matchups will probably like this.
Limited: Solid. Good card to pick up for the sideboard.

Constructed: N/A. I don’t see it happening with so many more efficient options available (Vinelasher Kudzu).
Limited: Good (R/G) Playable (Other). I don’t know if I would play it except in R/G, but in that it’s probably going to make a dent.

Constructed: Maybe. Ah, what a clever little battle of wits. You can store extra land to try and dome for 7 or 9, but if you go overboard they might be able to counter it. But if you don’t quite go overboard, and they counter it, you use their own lands against them when you send it back to deal a colossal amount of damage.

The bad part is a situation where you just play this out turn 3 to kill a blocker, and they have a couple extra land on you, and you get devastated.

Sandy: I don’t know. I mean, it sounds like a good daydream but actually doing it is too weird. It’s too dangerous.
Jeffrey: Sandy, let’s just try the first part. No one will suspect us. Because no one would think two people like us would be crazy enough to do something like this.
Sandy: You have a point there.

Limited: Solid/Good. The worst case scenario is still the one mentioned above – wanting to use it, but opening yourself to the possibility of getting wrecked by an opponent’s otherwise-terrible land heavy draw. That said, if they don’t know it’s coming, you can milk it hard and long in the late game, for as much as you need to.

Constructed: N/A. Burn/Boros deck, sideboard for the mirror, or non-Enchantment removal creature decks? I don’t see it happening – too slow. And they just save their creatures up until after it’s gone.
Limited: Good/Bomb. If you’re in any position to stall the board while this is in play, the game should be over pretty quick.

Constructed: Good. It’s no Flametongue Kavu, but it’s not bad. I can see this in any sort of Zoo or Boros deck as a sideboard against other creature decks. Maybe even maindeck, or in Extended.
Limited: Bomb. Efficient, provides inevitability. Little, yellow, different.

Fury of the Horde

Constructed: Maybe. Nothing with a big effect that’s free is that easy to write off. I don’t see it personally, but maybe I’m not thinking hard enough. (I basically only ever learned R/G beatdown and U/W control.)

All I know is: Llanowar Elf + Rumbling Slum + Psychotic Fury + Fury of the Horde = DG.

Constructed: Maybe. A curious little fellow indeed. The obvious inherent break in this card’s symmetry is that, as the Red player, damage done to you is usually far less relevant than the damage done to your opponent. That said, this card is competing with cards like Rumbling Slum and Stalking Yeti. But I wouldn’t be too surprised if I saw it turn up eventually.
Limited: Solid/Good.

Constructed: Maybe – I guess. Five mana for a Ball Lightning doesn’t seem that hot… by the time you want to be spending mana on this thing, you probably want a finisher that’s more reliable, like Demonfire.
Limited: Playable. This is no Demonfire, but it can make a dent if it catches someone by surprise.

Think about it, that’s all I ask.

Constructed: Maybe. Kiega et al work hard at six mana. For seven, I don’t think it’s worth it. Might have a home after the rotation.
Limited: Bomb.

Constructed: Fringe. The Signets are pretty damn functional, but after they rotate out, I see no reason why this couldn’t be used. Also will probably be the choice in decks where Snow permanents are relevant.
Limited: Good. With so few other accelerators available, this is good. 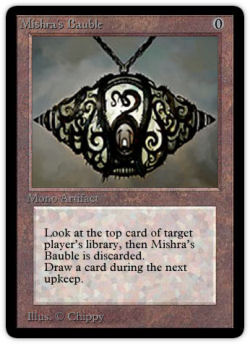 Constructed: Good. Makes playing 56 card decks pretty feasible. The primary downside is having less information about your opening hand while deciding to mulligan.
Limited: Playable. Fine, but obviously not worth taking over anything you’d want to play with.

Constructed: Maybe – worse has been played. But that was a long time ago.
Limited: Solid. A fine body… the only concern is whether Snow mana will be prevalent enough that you can always at least pay the mana when you want to.

Constructed: N/A. There is no Glimpse deck.
Limited: N/A

Constructed: N/A
Limited: N/A. For both formats I can almost see it – you sac your one or two drop, and hit them for eight. This plan is so full of holes though – leaves you open for a two-for-one, they can chump block, you can draw the ‘gorger without drawing another creature.

Constructed: Maybe – but I’m not going to be the one to crack it.
Limited: N/A

Canadian Nationals Preview #2: The Assassination of Jeff Cunningham by the Coward Taylor Putnam

Taylor blazed onto the scene last season with a Finals appearance at Grand Prix Seattle, which he followed up with… well, we’re still working on that part.

The point is this: unlike his former patron, Murray Evans, Taylor playtests hard, and has a bit of fire left in the belly.

His Achilles heel? A treacherous streak the size of Rhode Island.

4-1 at Charleston, I sat down to play Round 6 against Rasmus Sibast. I was with WGU Glare, and he had RGU Control – typically a great matchup for him. He took Game 1 unceremoniously, but Game 2 I had my plan ready: Dovescape/Chord of CallingÂ—no one was prepared for it.

Except… Rasmus, somehow, was. He played around the combo the entire second game, as if he knew. I was baffled. After he just narrowly pulled out the win, I had to ask: “how did you know?”

”A little birdy told me,” he shrugged in Taylor’s general direction.

A man I had called friend. Team-drafted with in earnest. Shared my deck with in confidence at his request. “I’m not even B seat!” he had said. Taylor would later claim that it had been an anonymous man in the crowd who had shouted to Rasmus my deck.

We shared a look. He knew I knew. He looked ashamed.

Neither of us spoke until, after a moment, I dug a Liar’s Pendulum and a sharpy out of my knapsack and tersely requested his John Hancock. “It’s just that I’m such a huge fan of your work” I spat, before reeling in disgust, and breaking into a jerky trot towards the exit.

I have forgiven Taylor, but I have not forgotten.