There’s nothing quite like the experience of a competitive Magic tournament. The fun times spent with friends, the amazing games, the delicious and
reasonably priced food served at every convention center and card store….

Well, maybe not that last one.

We came to win.

As simple a goal as winning may be, actually achieving it is much tougher. Today, I’d like to go over some sure fire tips I’ve learned from the grind that
will help anyone up their win percentage.

Never Give Up, Never Surrender

Let me tell you about my good friend Corey Mann. About five years ago, Corey was one of the fiercest names on the Eastern PTQ scene. Known in particular
for his prowess with Kithkin in both Extended and Standard, Corey achieved the ridiculous number of 19 PTQ Top 8s in his heyday. Want to know his greatest
secret for success? He would never, ever, concede a single match, no matter how dire the outlook.

It wouldn’t matter if Corey was on a mulligan to four or if his Cruel Control opponent had just cast their third Cruel Ultimatum in a row, he would never
admit defeat until his life total hit zero. I can’t tell you how many times I have watched one his matches and heard an onlooker mutter something about him
wasting time by not conceding, only to be baffled a few turns later when he pulled off the miracle victory. Sometimes, it would involve him drawing a
handful of Cloudgoat Rangers and Spectral Processions in a row, but quite often, it would be as simple as his opponent making a mistake and letting him
back into the game.

I mean think about it, have you ever been in a position where your opponent is seemingly dead to your attack, but if they have a single piece of
interaction in their hand, they’re going to be able to destroy you in combat? I know I have and it can be downright terrifying making the decision to pull
the trigger. You know what makes the decision really easy? When your opponent just concedes and lets you off the hook. I personally have won over a dozen
high level matches of Magic where my opponent has had the chance to win the game and didn’t simply because I was still playing the game and they assumed I
had something.

“Concealing information” is overrated. If you have any chance to win a game, fight until your last breath.

Play to Win, Don’t Play to Not Lose

Also known as “play to your outs”, this has to be my favorite maxim in all of Magic.

To understand what this motto is bringing to the table, all you have to do is watch this video:

To break it down, Craig Jones is playing Zoo against Olivier Ruel’s Hand in Hand deck during game 5 of the semi-finals of Pro Tour Honolulu 2006. Craig is
pretty far behind when he eventually draws a Char from the top of his deck. As he goes in the tank, you can even hear the announcers commentating about
what he should do with it.

Does he use it on one of Olivier’s creatures and buy himself some time? Or does he go into “chump block mode” and send it upstairs, hoping to draw a three
damage burn spell on the following turn. The reality of the situation is, if Craig uses the Char on one of Olivier’s creatures, all he is doing is buying
himself time. But time to do what? Lose the game in a slower, painful, and more drawn out fashion?

Chump blocking and losing his entire offense might not have been pretty, but it put Craig in the best possible spot to actually win the game. In Magic,
tough decisions like this one come along all the time. As you can see, having the discipline to make them correctly might just lead to some of the best
plays in Magic history.

Back when I first started grinding PTQs, I always used to travel around with the same two guys. For the sake of this article, we will refer to them as
Player A and Player B. Although they have changed their ways now, Player A and Player B used to be very aggressive when it came to the rules of Magic. At
any given tournament I would regularly hear their voices call out “Judge!” almost every single round, looking to exploit even the smallest mistake from
their opponent or bury them under a pile of warnings.

On the other hand, I was exactly the opposite. I was so shy and timid at the time that I would allow my opponents to go as far as to take back mistakes
they had made, even if it was going to cost me the game. I know for a fact that Player A and B won more games than they deserved to due to their rules
bullying, and that I lost more games than I deserved to due to my leniency. By no means am I advocating turning into a rules monster, but there is
definitely a happy medium between Player’s A & B and “timid Frank”. Although, you shouldn’t be actively looking for a reason to call the judge on your
opponent, you aren’t responsible for their mistakes either.

First off, having a reasonable understanding of the rules is a great place to start. I’m not saying you need to be able to pass a judge test, but something
as simple as knowing which triggers you need to announce and which you don’t will go a long way towards avoiding sticky rules situations. Most importantly
though, never be afraid to call a judge if you don’t know what to do in a situation or feel like you are being wronged. Just two weeks ago I lost an important match at Grand Prix Atlanta
that I could have potentially won if I had just appealed a ruling. Unfortunately, I let my lack of assertiveness get the best of me and I have been kicking
myself for it since.

Play Your Own Game

Late last year I found myself sitting at a 10-1 record during Day 2 of Grand Prix Toronto. With a 2-0 start in the first draft pod of the day, getting that
third win would have put me in a great position to Top 8 going into the second draft. As fate would have it, the opponent I needed to defeat to lock up the
3-0 was none other than William “Huey” Jensen. To add in some extra pressure, our match was staged in the feature area.

Let me tell you a little something about Huey. The man is a competitor like no other, and I got to experience it firsthand in our Toronto match. There is
just an energy about him when he plays; he has an aura of confidence, experience, and relentlessness. On each of my turns he would stare at me as I thought
about my plays, with a look that said “If you make even the slightest mistake, I’m going to crush you.” He played with a fervor I wasn’t expecting, and to
be honest, it was hard not to get caught up in. Although I don’t think I made any major mistakes during our match, I know I let Huey put me off
kilter and played a lot faster than I normally would.

When we met again in the Top 8 of Grand Prix Philadelphia, I went out of my way to slow down and focus on my plays as much as I needed to. I didn’t let
Huey’s pressure get into my head and played much better because of it. While you’re not going to run into the likes of Huey at your local PTQ, you will
find lesser versions of him. There will be players that attempt to make you play faster, give up information, or just generally try to throw you off your
game. The surest way to avoid this is to just slow down, focus, and play your own game. More often than not, it will end up putting them on tilt that they
weren’t able to get to you.

Assuming you don’t win every match 2-0, it stands to reason that you’re going to end up playing more games postboard than preboard. As such, knowing how to
sideboard is an essential and often overlooked skill for any fledgling Magic player.

In limited, sideboarding always comes down to context, and can be done on the fly. Does your opponent have a ton of 3/3s and 4/4s? Better bring in that
Rotted Hulk. Is your opponent playing a deck with a lot of removal for cheap creatures? It might be time to ditch the Loyal Pegasus in exchange for a
Gluttonous Cyclops. The trick about sideboarding in limited that people have so much trouble with is it often involves finding situations that make
terrible cards good.

I remember back in the day playing a Time Spiral block draft at my local FNM. During one of the rounds, I got paired against my friend Elliot who had a
very mediocre four-color Green deck. After smashing him the first game, he managed to steal the second one out from under me with a massive Tromp the
Domains. I remember realizing during boarding for the third game that the only way he could beat me was with the powerful sorcery, and I made a bold deck change
because of it. 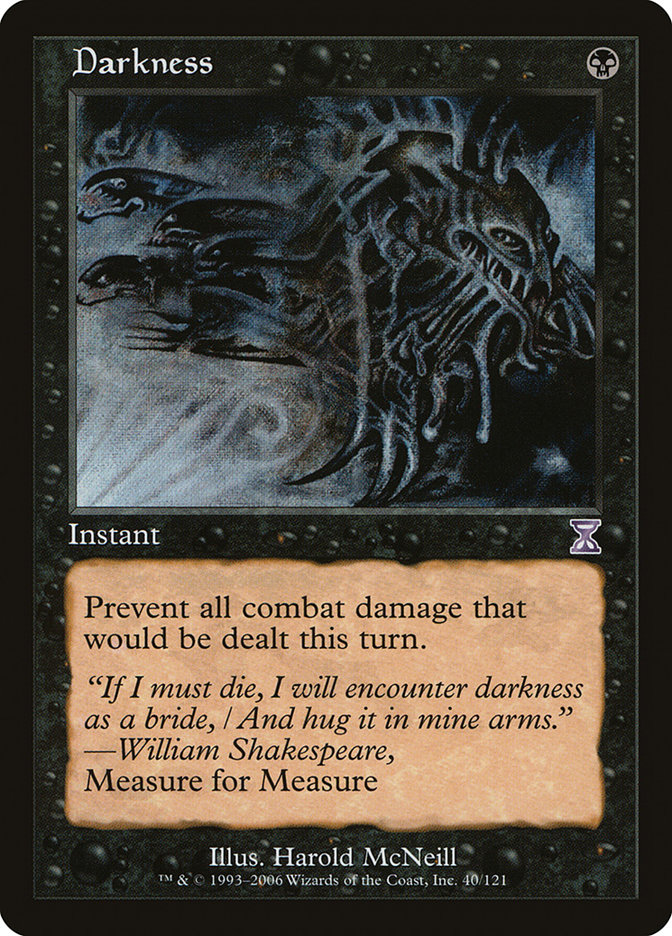 Sure enough, when Elliot went to pull the rug out from under me and steal game 3 with a Tromp for four, I was able to wipe the smile right off of his face
with the always hilarious Darkness. It may seem like a cheeky card to bring in, but allow me to quote the flavor text from Armadillo Cloak:

Sideboarding in limited takes a certain knack that can take some time to develop. The simplest way to start is to write down the important cards your
opponent plays against you during your games. By doing this you can take a critical look at how the cards in your deck match up against them, and what you
can do to improve that.

Sideboarding in constructed is an entirely different animal. For the most part, it comes down to having a premeditated plan. You need to know the majority
of decks you are going to face, how they plan to beat you, and what you need to do to stop them. As someone who plays a lot more limited than constructed,
I can tell you that the only way to know how to sideboard in constructed comes from hard work and diligent practice.

At the end of the day, you’re not going to be able to win every match of Magic. The trick is realizing that more often than not, there is going to be
something you could have done along the way to give yourself a better chance of getting that W.