Even though Liliana hasn’t proven herself in battle, the buzz from pros and other people in the community is that she’s got the goods. So what’s an aspiring Magic player to do but to pick up four of these harlots? The problem is that the set has only been on the streets for two weeks now, and the supply is as low as it’s going to get. MTGO redemption hasn’t started yet; stock levels with retailers are low from filling preorders; and players are holding onto their mythic rares to avoid missing out on the next Jace, the Mind Sculptor. With the demand so high and the supply so low, it’s not surprising that its price has hiked so high, but can it stay there?

The question on everyone’s mind is, “Is Liliana the next Jace TMS?” If you asked me this question two weeks ago, I would have said no. Hear me out; I know what you’re thinking. “Is this guy really going to say that Liliana is as good as Jace?” Rest assured I’m not going to say that. I will say that it’s possible that Liliana follows the price pattern that Jace did. The number one reason is that people are crazy. They become irrational when trying to decide what to buy. This hype will be fed by the fact that Liliana is actually good. The more I play with Liliana, the more I realize that she can be a role player in multiple deck archetypes. This was one of the characteristics that made Jace, the Mind Sculptor so awesome, and the more that I think about it, the more I can see her being played in Eternal formats. So, “Is Liliana the next Jace TMS?”

Logic would suggest no. Liliana is not as good as Jace, and theoretically there will be more on the market, but we have to remember we’re dealing with degenerate Magic players here, and you can’t apply logic to the actions of the mob. For this reason, I could see Liliana hitting $100 if the mob sees fit to put her there. Don’t buy in at the current price because no matter what happens with the price, it’ll go down in the long run. If you need Lilianas to play with, then I recommend trading other inflated cards for them, like Stromkirk Noble; speaking of this little devil. 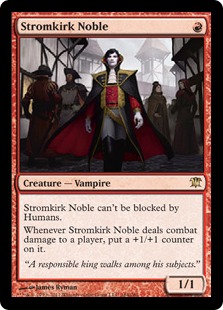 Stromkirk Noble $9.99 (Sold Out) – I’ll never cast one of these guys, but I saw the price hike coming a mile away. This situation was birthed out of necessity. When Goblin Guide left the format, RDW was in need of a one-drop. Grim Lavamancer couldn’t fill the role alone, and the loss of fetchlands made him significantly worse. In the winning red decks from Indianapolis, Lavamancer played second fiddle to Stromkirk Noble. There were only three copies of Lavamancer versus four copies of Stromkirk in each deck. As long as red decks are leaning on Stormblood Berserker, Stromkirk will be a key player in Standard.

Red deck has earned the label of “the budget option” for most formats. Because the deck is mostly constructed of commons and uncommons, there is a lot of space for one or two of the cards to be high in price and still keep its title as the budget deck option.

I expect Stromkirk Noble to stay high through States, but it will drop after States. The fact is that this card is no Goblin Guide. In older formats, this card will lose the battle for deck slots to Goblin Guide. One of the reasons that Goblin Guide got so high is because of its multi-format viability.

Some people need things spelled out for them, so here goes. We did it! If you bought Nobles at $2.50 and sell then now at $8+ (this is what vendors are buying them at), then you make a healthy profit. My advice is, if you’re not playing with your Stromkirks, sell them before or at States. 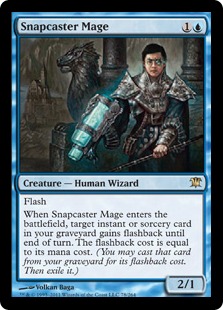 Snapcaster Mage $29.99 (Sold Out) – I’m hearing crickets when it comes to the price of Snapcaster Mage; it’s been sitting at $29.99 for the last two weeks without the slightest move in either direction. I’ve been expecting him to take a little hop to $35 before starting his descent into “market-saturated Standard rare.”

I’ve been playing Tiago, and I think the card is insane, but I wanted to hear from my people who really know their stuff. I know that Snapcaster Mage’s price point will be determined by its success in Legacy, so I asked GerryT and AJ Sacher what they thought about Snapcaster Mage. They both played Snapcaster in their Legacy decks in Indianapolis:

Snapcaster is going to change the face of Legacy, much like Mental Misstep did, but in a different way. Spell Snare’s stock has just skyrocketed, and I’m disappointed in myself for not playing them last week.

Snapcaster might not be as good as Mental Misstep or as format warping, but it puts blue back on top (as if it ever left).

AJ Sacher:
Snapcaster lives up to the hype. Tiago is absolutely insane; just like Misstep is the past, Snapcaster is the future.

This is a pretty convincing case for the flashy little two-drop. What this tells me is that Snapcaster Mage is going to be a mainstay in Legacy which will make the price that he settles at more stable. It also gives us a look at the future. Like I stated in my set review, I expect Snapcaster Mage to dip while in Standard (no lower than $15) then reach the pricing level of Dark Confidant, Tarmogoyf, and Vendilion Clique. This is some compelling evidence for that case. My advice for this card is to wait until they dip in Standard and then start picking them up. They’re sure to spike in any PTQ season that they can be played in.

The buzz from Nashville

Nashville was the second Standard event to go into the books since Innistrad hit the streets. What cards were hot? What did I learn in the short time that I was at the trade tables? Let’s start with the hot new cards. 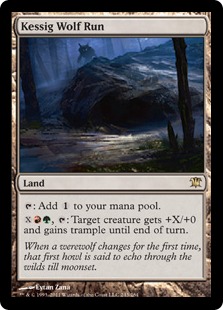 Kessig Wolf Run $3.99 (Sold Out) – This card helped Brian Sondag take the Standard portion of SCG Open: Nashville. His finish warmed the hearts of Primeval Titan lovers everywhere. A lot of people have been asking if this is a “buy.” If you can pick them up for $1 or less, then these are an obvious buy, but I wouldn’t chase after them. My strategy would be to go for the stable cards from the deck like Primeval Titan and Inkmoth Nexus and then try to ship these at States for the “pre-tournament” premium.

Here’s a question that you might have as a reader: “How do I make the determination to go after Inkmoth Nexus and Primeval Titan over Kessig Wolf Run?” The way that I do this is that I look at the worst-case scenario. What would be worse, to have ten Primeval Titans and ten Inkmoth Nexuses after states, or twenty Kessig Wolf Run? I would rather have the Titans and Inkmoths because these are used in other decks, and they are easier to move. These cards have proven themselves, whereas Wolf Run’s price may die with the fall of this deck. 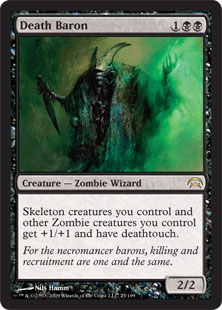 Death Baron $7.99 (Sold Out) – This card is very popular among casual players. It’s crept up from $2 over the last year, and now it’s closing at between $7 and $10 on eBay. One of my buddies who trades for a living tipped me off to this card this weekend. Obviously he asked me if I had any first; after I said no, he proceeded to tell me about the price. It’s funny the games that us traders play with each other. This is a pretty easy pickup at $1 or $2 so keep an eye out for these. 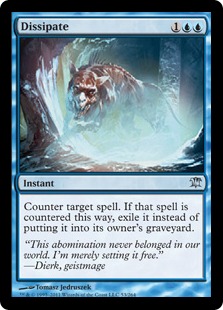 Dissipate Foil (FNM) $9.99 (Sold Out) – This card is sold out everywhere, and there are no copies on sale on eBay. I get the feeling that this could actually be a $15 card if you can find then. I know that I would pay $15 if I could find them. This card still has a long life in Standard and Modern, and people are going to want to pimp theirs out. Keep on the lookout for these. 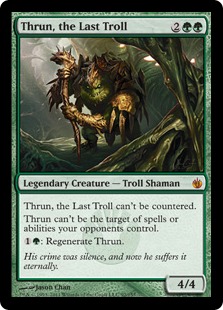 Thrun, the Last Troll $7.99 (Sold Out) – Lately, I haven’t been able keep these guys in my binder. I expect this trend to continue, since there were three in the sideboard of the winning deck from Nashville and two in Brian Kibler deck. Be on the lookout for these; it’s always good to have a playset in the trade binder.

I hope you guys enjoyed this week’s article. I know it’s no iPad story, but I can’t help that my week was less interesting. I did try to trade for Brian Kibler bag this weekend, but he “no sired” me. I’ll get him next time. Thanks for reading!