Theros is finally here and you already know the results of the StaCityGames.com Standard Open in Worcester, but I will not say a word about it and will be focusing on some brews instead. It may be strange, but I have two very good reasons for this. The first one is that everybody will write about these results anyway. The second is even more important—my deadline is long before the end of the tournament. So my plan for today is another set of brews and a special bonus section for Legacy players disappointed by the lack of their favorite format in Worcester.

The first brew for today comes from Magic League, where it was extensively tested and proven successful in the hands of some well-known pilots.

No spells at all! Why would you expect this deck to work—and to work better than, say, G/W? Because of consistency. You can always cast your threats and can just ignore the problem of having the proper lands in play. This deck has great threats, and you can expect them in multicolored aggressive decks too, so this is the point where a monocolored deck gives you actual advantage.

What do I dislike here? Just a single card—look at the decklist and guess which one. You’re right if you guessed that Burning-Tree Emissary is the bad girl of the day. The card isn’t very impressive on its own, especially if you cast it later than the second turn. Additionally, Kalonian Tusker is the best two-mana creature here, and you can’t cast it off of Emissary mana. It’s often fine to cast Burning-Tree Emissary on turn 3 with a good follow-up (like a Domri Rade), but you normally want to cast Boon Satyr at instant speed. 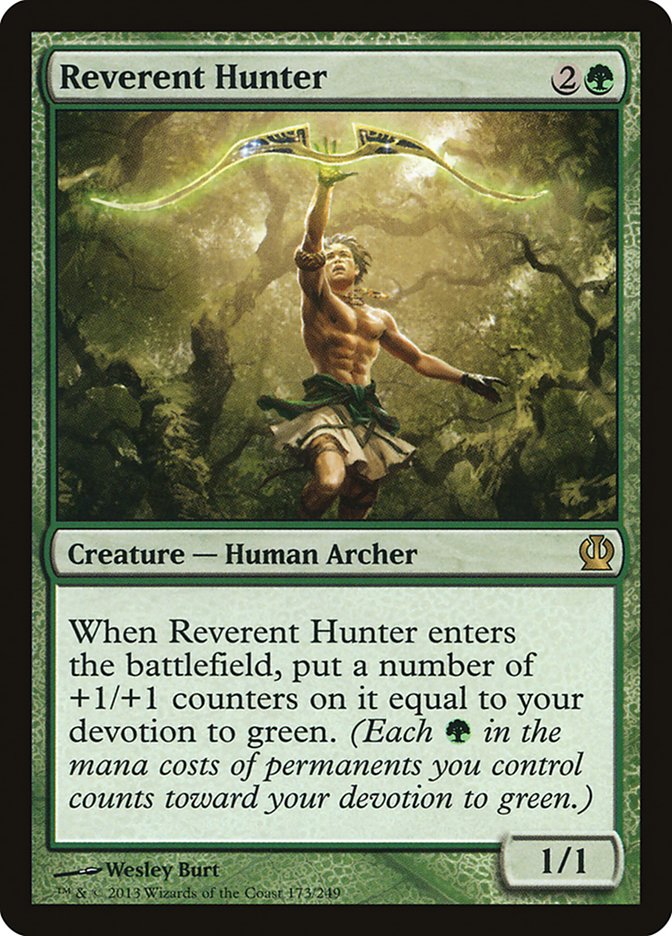 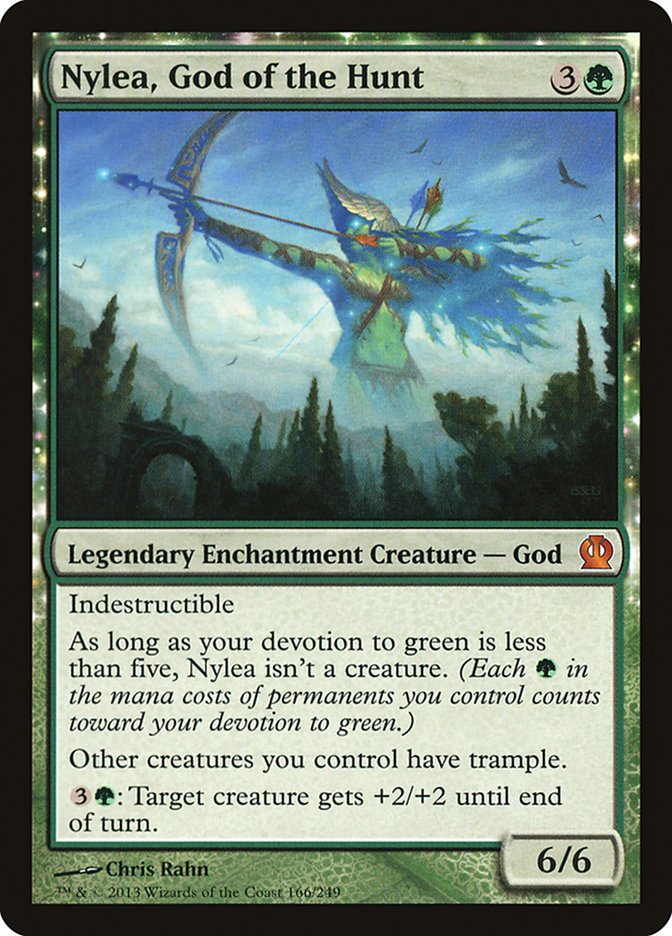 Another concern is the deck’s late game and card advantage sources. G/R has Domri Rade as an advantage engine and at least some removal. Boon Satyr is great, but it’s worse than Ghor-Clan Rampager when we’re using it as a removal spell. Could some copies of Pit Fight make the cut? The card is far from either Domri Rade or Ulvenwald Tracker, but it’s still better than nothing.

The last point is the deck’s set of finishers. You’re supposed to have Nylea, God of the Hunt in her creature form from time to time (she and Boon Satyr also provide some resistance to Supreme Verdict), but the last six creatures look like the deck’s designer was unable to choose among all the green goodies and finally put two of each in their list. So how do you choose?

This question has no answer right now since it strongly depends on the metagame. It’s generally better to have Polukranos, World Eater in a creature-filled metagame, while Deadbridge Goliath has scavenge, which is very relevant whenever you topdeck Elvish Mystic right after Supreme Verdict. This list contains a decent amount of lands, so activating monstrosity or scavenge shouldn’t be a problem.

By the way, a high land count seems to be a much riskier move than in many previous formats. Why? Because there are very few ways to utilize excess mana. We have no Celestial Colonnade or even a Kessig Wolf Run to sink mana into. Mutavault is fine, but it has prohibitive restrictions in a format where we need to cast multicolored spells early. The only consistent way to spend excessive mana is monstrosity, so let’s look if there’s a deck built around it.

The first card that comes to mind when I think about a monstrosity-based deck is Garruk, Caller of Beasts, but the mighty walker unfortunately can’t put Stormbreath Dragon or Ember Swallower in to play, so we should round out the idea of putting a monster into play and activating monstrosity immediately with Polis Crusher; Arbor Colossus; and Polukranos, World Eater. But should we actually do it or is there a better implementation of this idea?

Xenagos, the Reveler may help achieve seven mana and destroy the opponent’s lands with Ember Swallower—especially if your mana is five lands and two mana from Xenagos’ ability. So let’s try to build monster mana ramp.

There’s no Farseek in the format, but we have three two-mana accelerants, which isn’t common even if these accelerants are creature-based. Voyaging Satyr is probably too weak for Constructed, but Sylvan Caryatid and Zhur-Taa Druid are fine enough to start with.

There’s a notable hole in the deck’s mana curve at three, but the list is perfectly suited for casting a four-mana card on turn 2 and then enlarging it very quickly. We can even have a turn 3 Stormbreath Dragon with the help of our friend Satyr Hedonist, but it’s more of an exception than the rule. You may have noted that there are just three copies of each planeswalker—that’s because we almost always want to cast walkers after creatures to support the first wave of threats. Even against control we don’t have a chance to cast Domri Rade on turn 2, so there’s no need for the fourth copy. 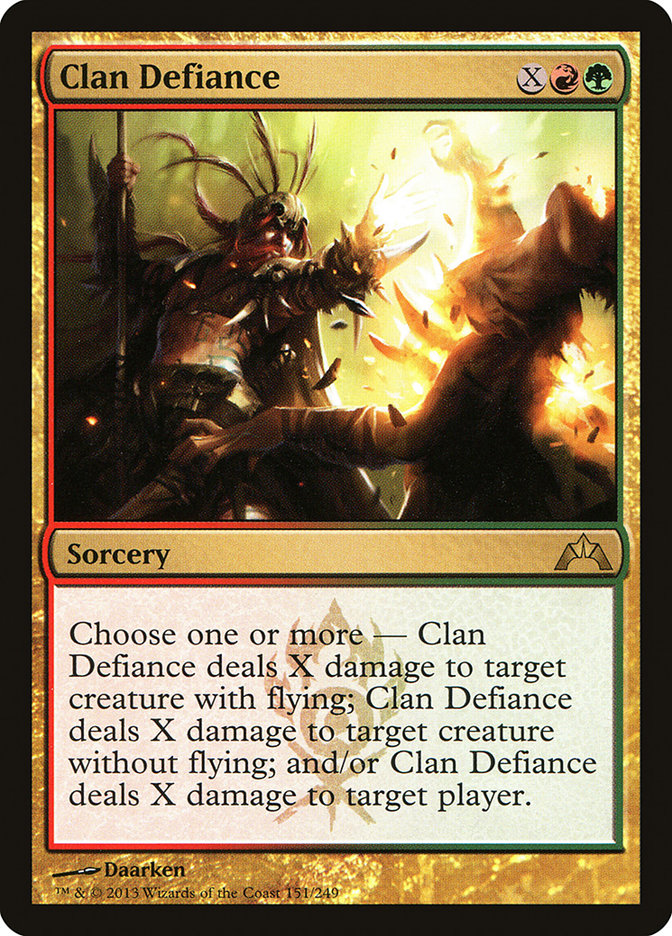 I’m not sure about maindeck Clan Defiance, but the card is fine as both removal and a finisher, so two copies could be fine, especially if you manage to use Nykthos, Shrine to Nyx to power it up. A possible substitute for Clan Defiance is Chandra, Pyromaster, who I definitely want to have somewhere in the 75 to help beat other midrange decks; our list contains very few conditional cards, so we could normally cast anything exiled with Chandra’s ability.

The rest of the sideboard is an anti-control package of five creatures, Flames of the Firebrand against aggressive decks, and Burning Earth against anybody greedy enough to play three colors. I’m not sold on Burning Earth, especially since there’s a chance that a third color may give us some advantage; Fleecemane Lion looks attractive, and Ral Zarek + Niv-Mizzet, Dracogenius does too.

The lack of one-mana creatures allows us to maximize the value of scry lands and supports complicated mana costs (including Niv-Mizzet’s activation). Ral Zarek also has an interesting way to protect himself by untapping Sylvan Caryatid. The sideboard contains a different set of threats that is much more focused on dealing with aggressive decks, but that’s a thing we should build according to the metagame, which is completely unknown to me right now.

As you are probably aware, the StarCityGames.com Open Series provides the world’s best and largest tournaments for Legacy players, but there are some big Eternal tournaments outside of the United States. The two best-known ones in Europe are Bazaar of Moxen and Ovinogeddon.

Bazaar of Moxen annually gathers hundreds of players in the resort city of Annecy in the south of France. It became so popular during the last few years that organizers decided to run a second tournament in Paris (it will take place the first weekend of November). Ovinogeddon attracts Legacy, Vintage, and Modern players to Italy every autumn; this year the main Legacy event was 406 people. I hope that European Legacy specialist Carsten Kotter will review it soon, but I want to share the two decklists from the finals right now because both finalists are from Russia.

Vladimir Padve (who has made Top 8 of Bazaar of Moxen) and Ilya Scherbakov (also known as “Door”) are good friends from Saint Petersburg who came to Ovinogeddon with fairly interesting decks and made the finals, where they happily split.

Yes, there is a Goblin Guide and no Snapcaster Mage. The deck is built to take advantage of very cheap beaters and Young Pyromancer. Note that every spell aside from Pyromancer and Smash to Smithereens costs just one mana, which allows the combination of Wasteland and Stifle to be devastating. Goblin Guide looks a little bit strange alongside this combination, but Vladimir Padve and the deck’s creator Fedor Rodukov say that its speed is enough to finish the opponent even through potential Ancestral Recalls made from Brainstorm. Our local forums were very skeptical about this list, but Vladimir has some pretty hard evidence. So if you want to test something different, give this list a chance!

The second deck in the finals was the very rare Maverick deck without Green Sun’s Zenith. The lack of the powerful Zenith seems very strange, and as far as I know there are just two players that consistently play this very old-school version: Ilya Scherbakov and Luis Viciano, also known as “[email protected]” (guess why the deck is named “Maverick.”). Luis made Top 8 of Bazaar of Moxen, and Ilya caught his achievement by winning Ovinogeddon, so maybe there is a good reason to play this version

I end my article with warm congratulations to Vladimir and Ilya and with the hope that you will also take your lovely brews to top finishes. The StarCityGames.com Legacy Open in Cleveland seems like a good place to start, doesn’t it?